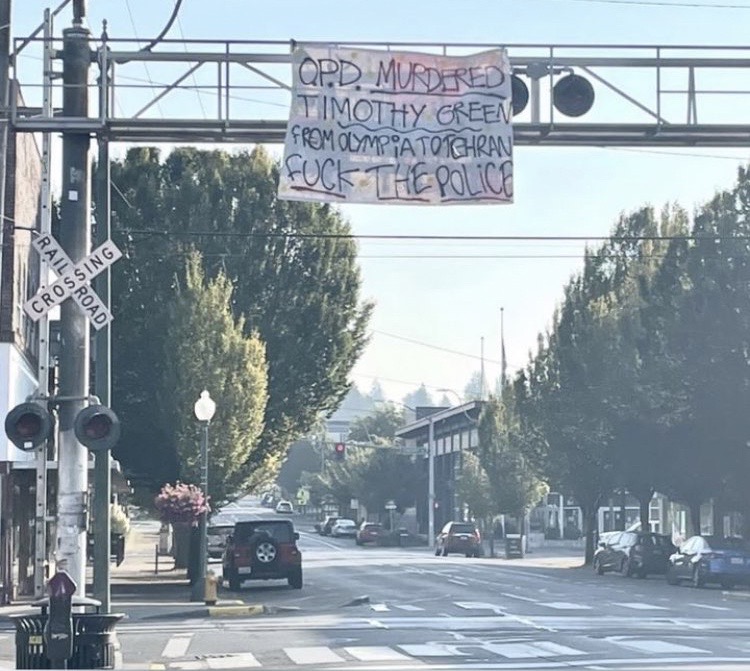 On Saturday, October 8th in the midst of a busy fall Arts Walk, we hung a banner from a railroad crossing over 4th Ave in the middle of downtown Olympia. The banner read “OPD MURDERED TIMOTHY GREEN / FROM OLYMPIA TO TEHRAN, FUCK THE POLICE.” We did this as an attempt to bring attention to the murder of Timothy Green, another Black person in the overwhelmingly white city of Olympia, by the white supremacist Olympia police department. The city uses Arts Walk to posture itself as engaged with the art scene and simultaneously as a vehicle for its violent campaign of gentrification, which the actual art scene despises. This murder is a part of the other side of gentrification, the city’s ever escalating war on homeless and disabled people and BIPOC. We dropped the banner to interrupt Arts Walk as a small gesture to shine light on the connection of racist murder by the pigs in Olympia to the violent policing of women, queers, students, and anyone who questions the legitimacy or actions of the Iranian state. Police everywhere do not protect the people. The police protect property and the state; we protect ourselves. We did this in the early night with many people outside at the bar and on the street on a busy Saturday. When we see other anarchists, abolitionists and people in the community take action against policing and other forms of white supremacy and social control, we inspire each other to act defiantly and take control of our lives.
RIP TIMOTHY GREEN, FUCK OPD.