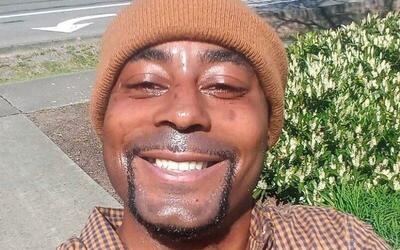 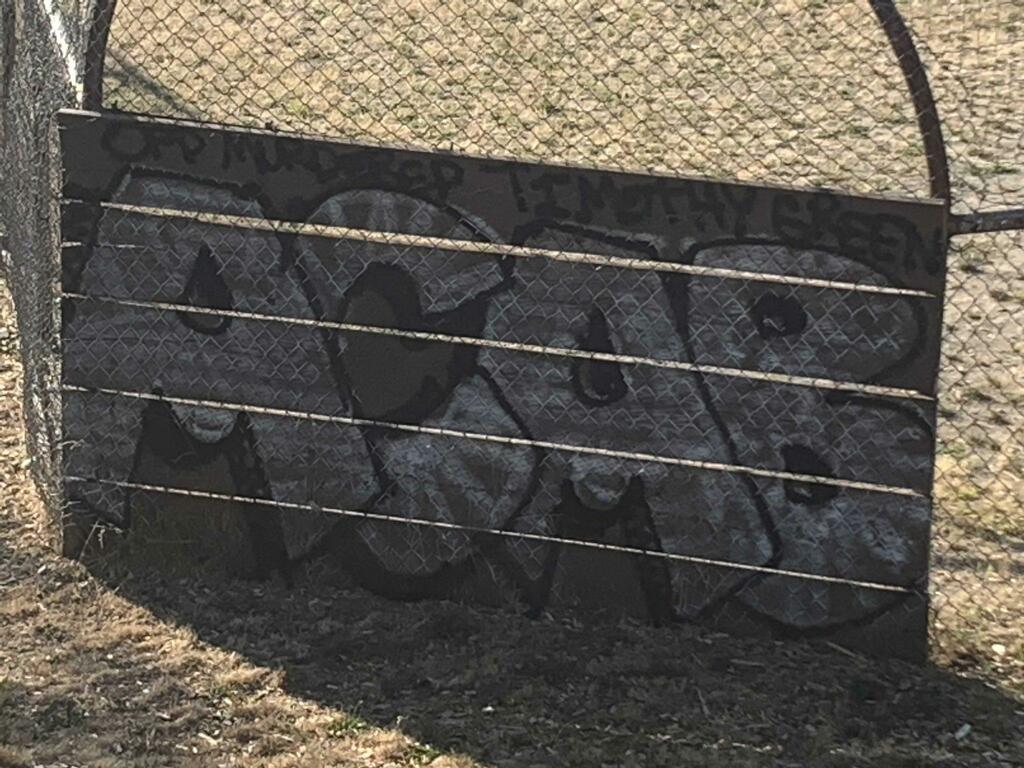 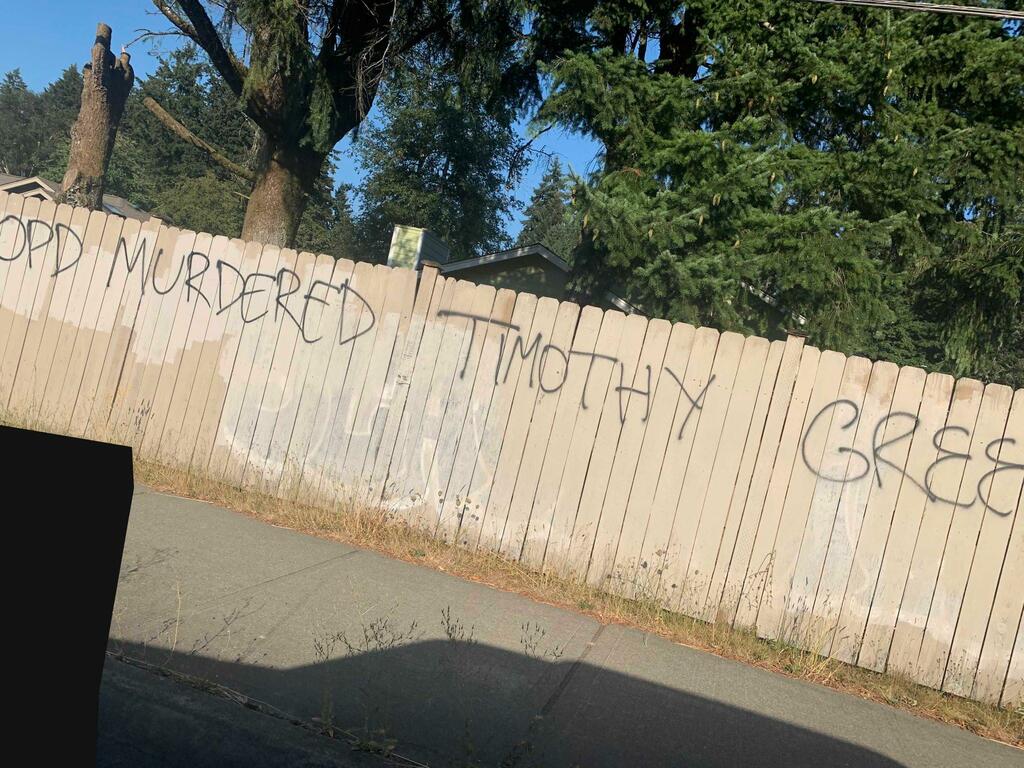 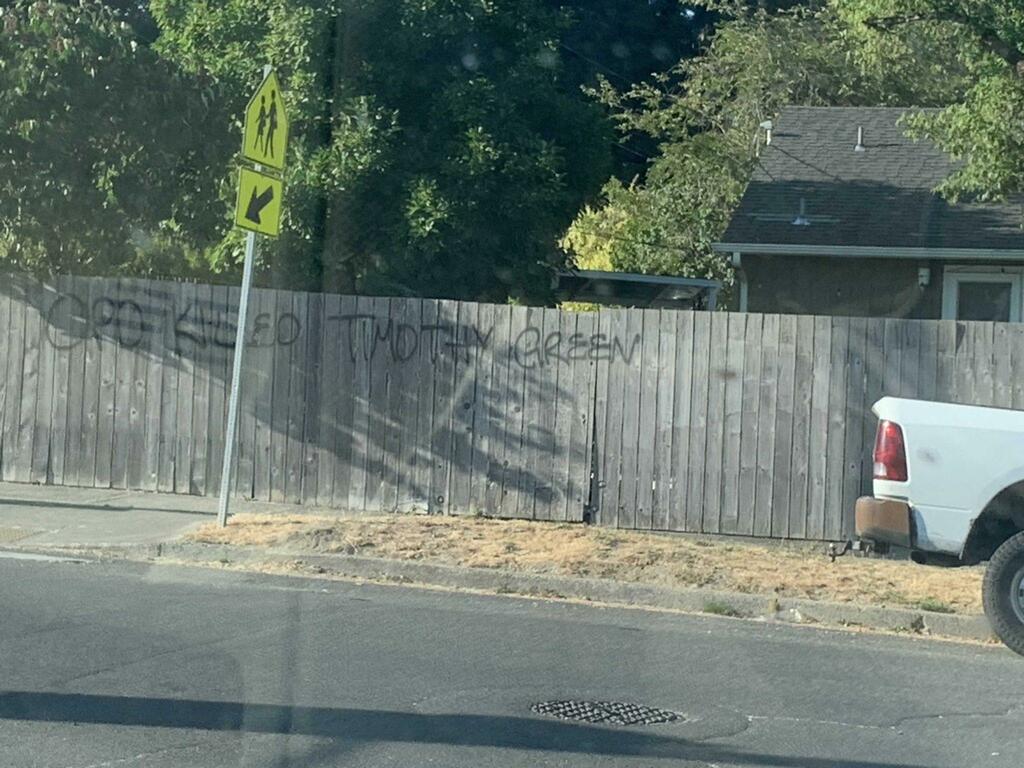 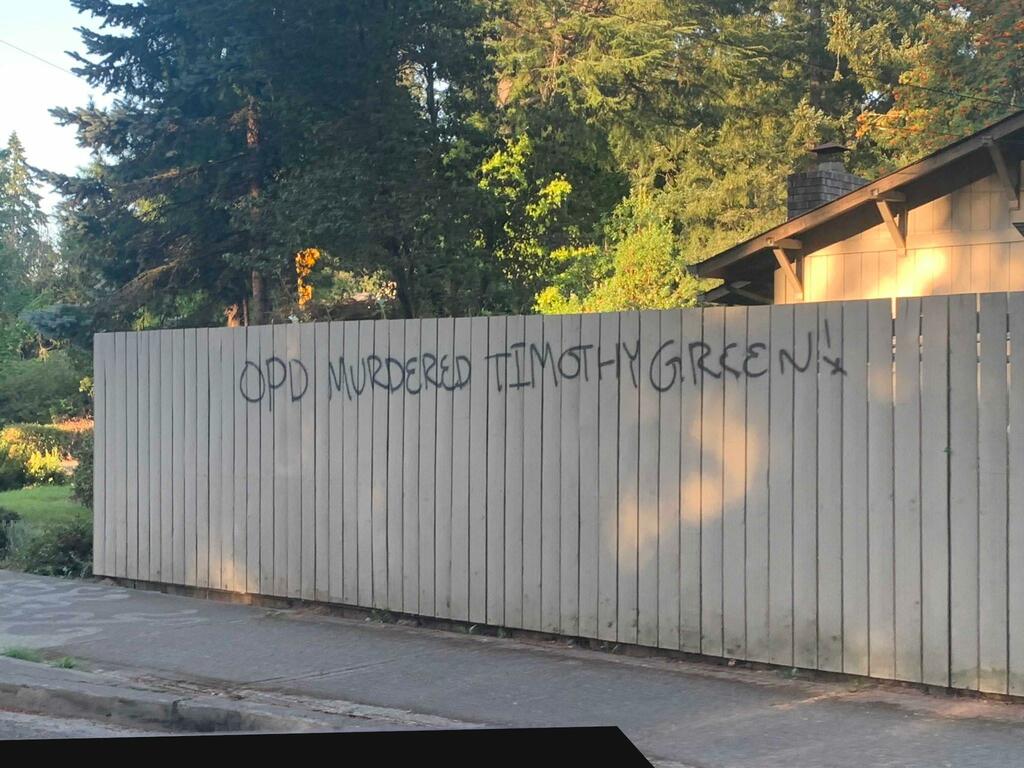 On Monday, August 22nd, Olympia police shot and killed Timothy Green a homeless black man and a friend and loved one to many. The story goes he was apprehended for shoplifting and pulled a knife on the pigs who then shot him. Witnesses say there was no knife. We don’t buy the police narrative but we are also not interested in relegating our care and rage to perfect victims who never fight back or simply write it off as the irrationality of mental illness as many who have good appearances to keep up are to do. Whether or not he had a knife, whether or not he actually shoplifted, we still hate the police and reject the state as the granter and taker of life. Our hearts still shatter for the taking of a life – one who could just as well be one of us or any of our friends, family, neighbors.

In our rage and grief we reached out to our friends and on the night of the 29th two crews of 3 people came together to throw up graffiti in response. A myriad of “Fuck the police” “More Dead Cops” “OPD Murdered Timothy Green” tags went up across the west side. While this is a woefully inadequate response it is all we have the capacity to muster at the moment – and better to adorn the walls of our neighborhoods with our love, grief and hatred than to wallow in feelings of powerlessness.

Besides being a personal expression of rage we undertook this particular action for a few reasons. Firstly there is a common mistake anarchists make in assuming because we are particularly plugged into news and on goings that everyone else is. The news cycle moves fast – extra fast when it wants to bury anything that might shake the social peace – and most people at best casually look at the news headlines every now and again. If we want to dynamite the fault lines of this society it is up to us to keep alive the news and memory of every murder, every abuse, every humiliation we are forced to swallow day by day and make sure they cannot be ignored or forgotten.

Secondly, in undertaking graffiti in particular we are in a small way attacking the projection of police power in our neighborhoods. In a sort of inversion of broken windows policing [https://theanarchistlibrary.org/library/a-g-schwarz-signals-of-disorder-sowing-anarchy-in-the-metropolis] when we show that the police can be evaded, that their laws can be broken with impunity, others out there who are filled with rage but isolated and feel themselves powerless will recognize the signs around them. A general feeling of lawlessness will compel others to act, and while one night of graffiti can be ignored and written off by many, we have to commit ourselves to keeping our neighborhoods adorned in more bold and brash ways. Not just when there is an acute crisis (can one really even talk of crisis anymore? Could we truly ever?) but all the time. Class was isn’t just when its openly in our faces, we are fighting it all the time.

Finally, we did this as a signal to our comrades and fellow travelers. We believe the best critique comes attached to action (in the broadest sense of the word). We are all tired. We are all feeling the squeeze. We are all feeling defeated. But excuses, resignation, and shrugging off the horrors of this world only teaches us (and those who are looking at us) excuses, resignation, and shrugging off the horrors of this world. While we certainly should not simply be the activist – reactive, with no project of their own and constantly pulled around by the whims of their enemies – we need to collectively get over ourselves and help each other back into the fight. We need to stop waiting – waiting for the explosion, for someone else to organize, waiting for strong organizations, waiting for others to step up and throw the first punch. Formalists and informalists alike are stuck waiting. But just as we are not going to fight other peoples fights for them, no one is going to fight for us. If we want to explode social tensions, if we want to be strong enough to throw landlords and cops off our backs, if we want the unleashing of all the terrible and barbarous forces of total social revolution, it is up to us to make it happen, to show others the pathways to elsewhere.

As some fellow travelers put better than we could,
“Passivity, resignation and doubt can easily give way to determination and defiance. A strategy of waiting can be thrown aside in favour of a strategy of attack. Small affinity groups can immediately begin to organize direct actions against specific institutions of capitalism; schools, workplaces, businesses, and all the other prisons. Anarchists can participate in base structures, mass organizations that are not vehicles for anarchist ideology, but are instead tools with which to dismantle specific repressive structures of the capitalist State. Bosses, landlords, politicians, and all the other cops can be identified and attacked. Capital can be destroyed to make room for life. “
–A Project of Liberation

To end, we off a challenge to our comrades. OUT DO US! Cover your neighborhoods in graffiti and wheatpastes. Go big and bold, take risks. Write a reportback. Let us talk to each other through the language of action, sharpen our ideas and analysis, and rebuild a sense of collective power.