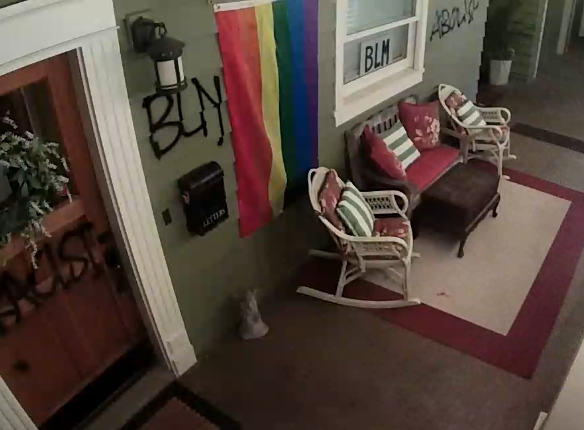 The night of June 12, an assortment of black liberation fighters, anarchists, and fellow travelers held a rowdy march against the police and the white supremacist world they maintain in downtown Olympia. In spite of the heavy militia presence tailing the march (30+ chuds from a new crew calling itself “American Wolf” in fluorescent green “peacekeeper” shirts with paint guns, regular guns, zip tie handcuffs; box trucks, and a limo), the march still managed to vandalize the mayor’s house, torch a US flag, bust up a bank and a Starbucks, and spread pro-black liberation and pro-abolition graffiti from downtown to the South Capitol neighborhood. There were no arrests.

The callout for the march read: “FTP Friday – Fuck OPD and every single cop. Fuck Cheryl Selby [Olympia mayor] and every politician. Fuck city hall and fuck the state. Fuck white civil society and all of white supremacy. Everything must go.” We wished to voice our total contempt for every facet of white civil society – from the gentrifying businesses that put up BLM signs on the window while they advocate for police to further deprive homeless people of access to means of survival; to the liberals who support “peaceful protest” but want the rowdy black youth who have been burning down the American plantation to rot in prison; to the lying snake politicians who start their speeches with land acknowledgments and take a knee in front of city hall and cry their fake tears for the murder of George Floyd, yet continue to employ the piece of shit cop who shot two young black brothers over a case of beer; to Olympia police officer Javier Sola del Vigo who had the nerve to visit the CHAZ after testifying against those same black brothers.

In order to bring an end to the police murder of black people we need to bring an end to police. A world without police means a world without the politicians who write racist laws for cops to enforce, who criminalize poverty, and who brought us the war on drugs. We say fuck you to the politicians who fund the police weaponry used to brutalize those fighting for black lives, and pass budgets to build prisons their goons will undoubtedly fill. We will not fall for the tricks of politicians who put on a nice face, and funnel more money to the cops under guise of reform. Politicians will never be on our side, they will always uphold law and order no matter the cost, over a freedom that threatens their hierarchies.

In liberal Olympia, the city government claims to stand against racism, but has shown their hand too many times. In a recent press conference, Mayor Cheryl Selby decided to preemptively blame violence on an anonymous group of black anarchists, the Salish Sea Black Autonomists, invoking the good/bad protester narrative, counterposing peaceful white activists and radical black militants. All while she evaded questions about the presence of racist white gun-toting militiamen in Olympia out to use violence in defense of property. We are not divided or confused by where politicians stand when they praise some of us and attack others in the same breath. The city has always demonstrated that they care more about broken windows than black lives. We see your crocodile tears, Cheryl Selby, we know your feigned ignorance will put us and our friends in danger. So together, we say: fuck you, eat shit.

Some lessons from the march:

First, the youth are unstoppable. Perhaps they know that this world has nothing for them. Perhaps their entire lives they’ve seen police murder after police murder followed by dead-eyed promises of reform, only to have it happen again. Those of us who have made the choice to devote our lives to the destruction of hierarchy and domination must do our best to not allow our exhaustion and jadedness get in the way of having the youths’ backs. We are continually inspired by their ferocity and bravery and looking forward to deepening relationships and moving toward an intergenerational struggle.

Second, American Wolf and every other brownshirt law-and-order hypernationalist larper militia must be stopped. American Wolf claims to support the Black Lives Matter movement, and is in fact a multiracial group. They claim to just be there to defend property and keep the peace. But we know what they mean by peace. They want the politicians, cops, property owners, and nazis to be left in peace by the disenfranchised masses. Even if one of their members had not thrown a nazi salute (followed up by an “OPD! OPD!” chant 30 seconds later), defense of private property is defense of white supremacy. Private property in the US rests on a foundation of indigenous genocide and black slavery. It’s all gotta go.

It’s worth noting that since American Wolf started showing up to counter-protest, OPD have taken a big step back. American Wolf are filling the role of the police and should be considered just as much an enemy.

Against recuperation, for black liberation and permanent conflictuality with white civil society.