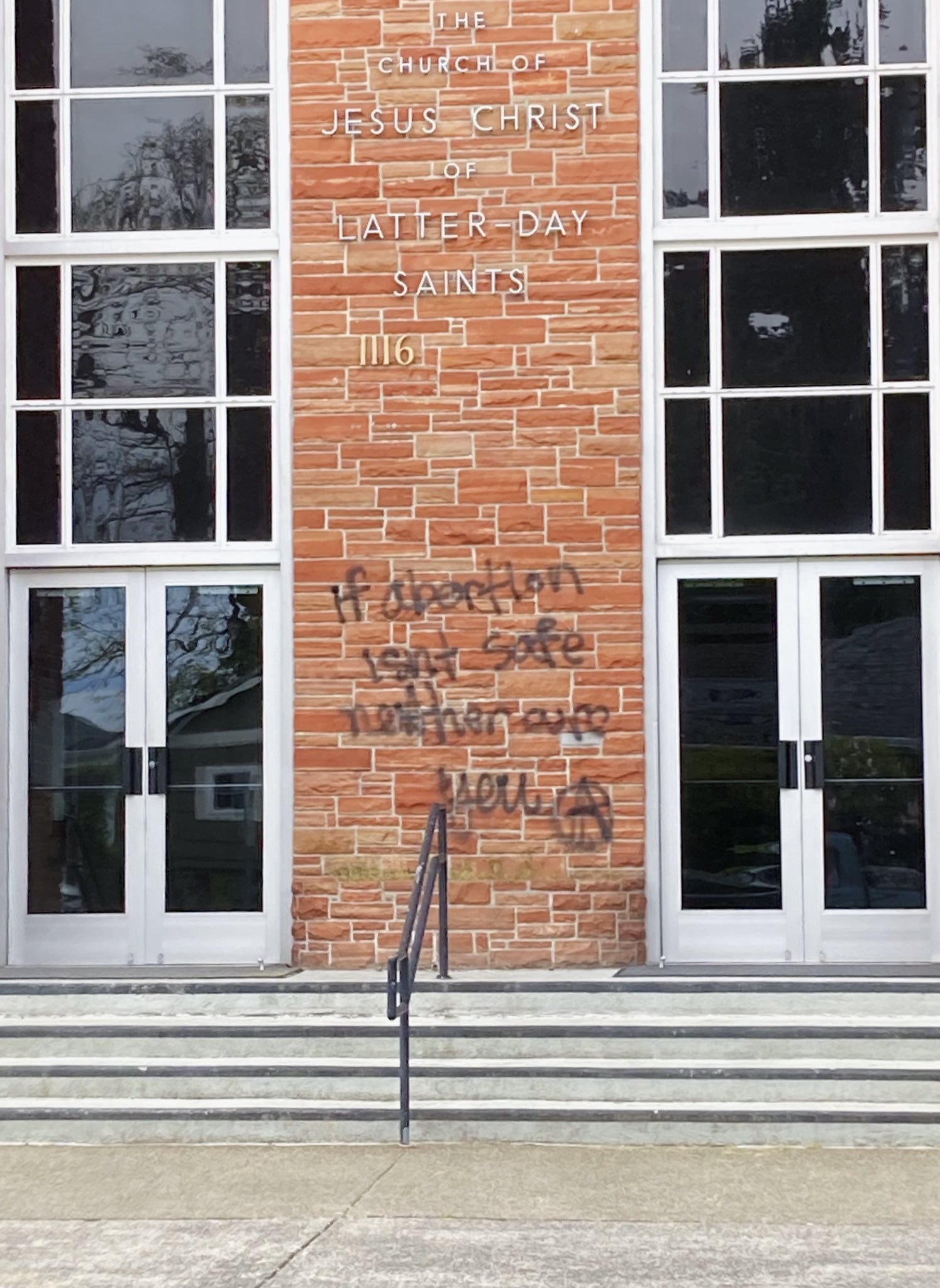 Today the Supreme Court overturned Roe v. Wade. While nothing short of the total destruction of the United States of America will be enough to secure total and lasting bodily autonomy and reproductive freedom, we can’t possibly know what all it will take to achieve this devastation because we haven’t achieved it yet so we might as well try it all. With that in mind, some anarchists attended a rally at the Washington State Capitol in Olympia this evening. We came with low expectations (well, not everyone was pessimistic), fliers, banners, and a burning desire for more. We milled about, chatted, and handed out fliers while half-listening to people variously begging everyone to vote or making good points about the effects of this new ruling in Washington and who will be most criminalized by this new precedent.

Almost everyone we gave fliers to was receptive and while it seemed that there was a general uncertainty in the crowd on how to do more or escalate, there was certainly a desire to do more than stand around and yell at an empty hall of power.

The text of the flier read:

IS IT NOT STRANGE THAT OUR BODIES – OUR VERY LIVES – ARE UP FOR DEBATE, FOR VOTE, TO BEGIN WITH?
We are continually told we must vote to protect our ‘rights,’ yet what kind of rights can be so easily stripped away by the decision of a small group of people?

The Democrats have continually used access to safe and legal abortions as a bargaining chip for votes and millions of dollars of donations, saying at every turn that they will codify Roe v. Wade into law – they didn’t do it when Obama had a filibuster-proof supermajority in the House and Senate in 2009 because it wasn’t his “highest legislative priority,” and even now when Democrats in the presidency and in majority in the Senate and House they still refuse to move an inch.

The repealing of Roe v. Wade is just the start. The basis on which it is being attacked is the Right to Privacy, which is also the basis of many other decisions now in sight of the Supreme Court such as Lawrence v. Texas (protects against criminalizing homosexuality), Griswold v. Connecticut (protects buying contraceptives without government interference), Loving v. Virginia (legalizes interracial marriage), Meyer v. Nebraska (protects families teaching children a language other than English), Skinner v. Oklahoma (protects against forced sterilization).

As long as there is a group of people able to make sweeping decisions about our bodies and our lives, we will always be at the mercy of those who want us subjugated, hidden away in the house, or dead. We will always be one election away from catastrophe. The only way for us to never again worry about someone else making decisions about our lives is to, on one hand, take full control of our reproductive health, and on the other hand, prepare ourselves to physically defend ourselves and each other fro those who would try to imprison or kill us for exerting control over our own bodies and lives. Laws bow only to force.

As the rally was winding down, someone got on the megaphone and read a list of local businesses, banks, and churches that raise money to criminalize abortion or that fund the local crisis pregnancy center. Others in the crowd started yelling “Let’s march!” Two banners reading “Anarchist sluts for abortion” and “Abort the courts” made their way to the front and stepped out into the street. Somewhere around 150 people followed, taking up two lanes of traffic. There was no arguing over the ethics of taking the street vs. staying on the sidewalk, people who wanted to take the street simply took the street and those who felt more comfortable on the sidewalk stayed on the sidewalk. We overheard a few people remark in surprise “Wait… we can just do that?” (The answer is emphatically yes.) While many people who attend liberal events are our enemies, many others simply aren’t aware of the world of possibilities and the power of our imagination and rage and once that door has been cracked open will gladly run through.

We first marched to Olympia Federal Savings Bank, an institution notorious for its hatred of homeless people and that also funds the local crisis pregnancy center/anti-abortion fake clinic (Options Pregnancy Clinic at 135 Lilly Road NE). From there we moved on to Harbor Church, which recently hosted a “March for Life” fundraising anti-abortion event. Finally we marched to St. Michael’s Catholic Church. At each stop someone talked about that institution’s role in criminalizing abortion. At the Catholic church someone talked about that church’s history not only of punishing abortion but indigenous genocide, the witch hunts, the crusades, and sexual abuse of children.

Some of us expected a few people to march to Olympia Federal Savings Bank and not much else. We were pleasantly surprised by how many people were willing to take the street and keep marching. While long marches can often feel uninspiring, exhausting, and pointless, it seemed useful and expansive to show that there are more options than just voting or yelling at a government building – the people and organizations that want to force us to give birth have names and addresses.

Some of the chants taken up by the crowd included:
“Abort the courts, we don’t need them. All we want is total freedom!”
“Abortion rights are here to stay. Smash the church and smash the state!”

While it was no riot, it felt good to nudge a milquetoast event in a more confrontational direction on the first of what is sure to be many nights of conflict for abortion and bodily autonomy. In the words of some French fucks, “everyone agrees – it’s about to explode.” And in the words of the greatest anarcho-punk band to have ever existed, “nothing ever burns down by itself – every fire needs a little bit of help.”