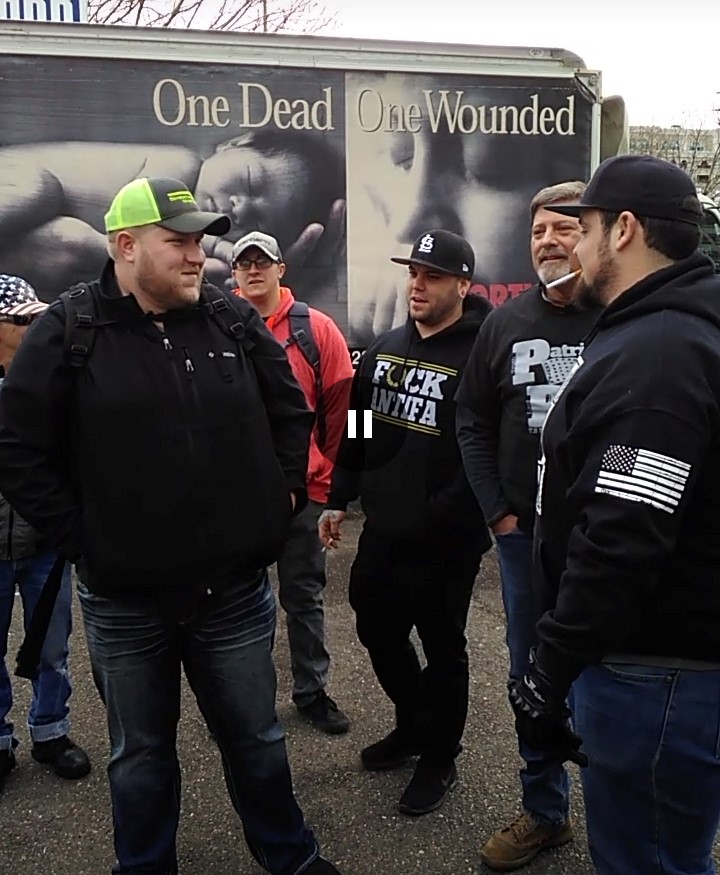 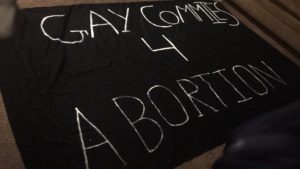 For the third week in a row Patriot Prayer and their Proud Boy friends came out to Planned Parenthood in downtown Olympia at 8am. Once again feminists, queers, anarchists, communists, folks who regularly do clinic defense, and other anti-authoritarians gathered at Planned Parenthood in defense of bodily autonomy and against patriarchy. At first the right-wing presence was just the handful of fundamentalists who are there every week, but slowly alt-right bozos from out of town began to trickle in. A crowd in black bloc began to form across the street from Planned Parenthood where the assholes were parking their cars. There were a number of newer Proud Boy-affiliated men who seemed eager for a fight. Right off the bat they seemed more aggressive and eager for a fight than usual. When Tusitala John “Tiny” Toese showed up he was wearing shorts and was shivering from the cold. Someone asked him about his outfit; he started kicking the air and said, “I just figured I would get warmed up from all the activity so I didn’t need to dress warm,” clearly hoping to instigate a fight. Tiny was also openly trying to agitate the people in black who came to oppose their patriarchy and nationalism. He repeatedly said “go ahead and try to silly string us today, I dare you”. His whole presence at the event felt like a warm up to a fight. Tiny was stretching and jogging in place while laughing, making subtle threats and insulting the counter protesters.

Protesters in black and pink trolled the Proud Boys by their cars, shining lights in their faces and mocking them. Russel Schultz, a Patriot Prayer dingus, responded by bragging to the crowd how large his penis is. Some of the Proud Boys including Robert Zerfing went across the street to stand in front of Planned Parenthood to support the Fundamentalist Christians and harass people going into the clinic. They argued with folks carrying an antifa flag and a banner reading “gay communists for abortion.”  The crowd of folks masked up stayed across the street and tried to keep the Proud Boys occupied and away from the front of the clinic, so that patients could receive medical care without getting yelled at.

Proud Boys and Patriot Prayer aren’t in Olympia to protest the clinic, they are here to pick fights with people who don’t want a few white men to control others’ bodies. The attempt to draw the Proud Boys away from the entrance to the clinic turned into an awkward and anti-climatic mingle. Two sides in total opposition, standing among each other as if on a cigarette break at the workplace.

At this point an American flag emerged and was thrown on the ground and burned in an effort to draw more of the right-wingers away from the clinic. The Proud Boys were instantaneously so “triggered” by this affront to their nationalist western chauvinism they lost their tempers and surged forward. Russel Schultz ran into the crowd and tried to grab the flag, which was now fully engulfed in flames, with his bare hands, ripping it in half. He then pushed someone much smaller than him to the ground. The scene that followed was chaotic to say the least. Cameron Heugly (more information below) tackled someone standing near by from behind knocking them down. Tiny barged in to help Russel Schultz throwing punches wildly at anyone in sight. During the melee one person was dragged to the ground by an older man with a white beard wearing an American flag hat (referred to on the livestream as Kerry, more information below) who ripped their mask off. Proud Boys began kicking them on the ground and Russel Schultz began groping their breasts. Eggs were thrown at the Proud Boys. At some point Travis Nugent wearing a green hat and a Columbia sport ware jacket, pulled out bear mace and deployed it spraying the whole crowd. After that most of the crowd dispersed to flush eyes. During dispersal 3 people were detained by police investigating a felony assault. The police alleged that one of the Proud Boys got their jaw broken in the altercation. One anti-authoritarian was later taken to the hospital but is in good condition. 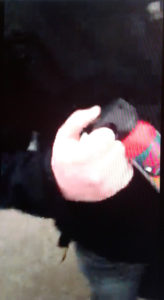 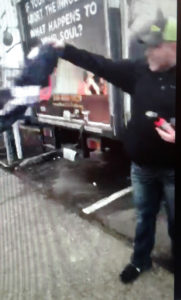 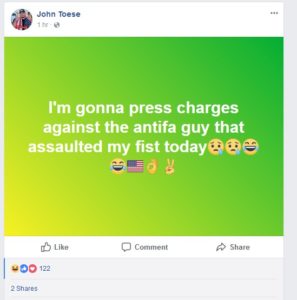 punched and that they had stolen an antifa flag. Conveniently for them, the footage of Cameron Heugly spraying the crowd with bear mace was edited out, showing nothing but their “courageous” victory.

The last few days have been rough for a lot of us in Olympia. Holding space in the street or antagonizing fascists has ended in injury and forced dispersal for a second time in a few days. We need to think about how to change our strategy to one that is more sustainable and replenishing. Many left today demoralized. If the alt right or fascists want to take public space we need to be there to oppose them. But these public appearances may not be the terrain on which we can take ground and win, especially if we don’t have numbers and materials. We should think about how we can effectively hold our ground in these spaces and then think about the other types of actions where we can more effectively win against the alt right or the police.

Kerry (American flag hat) – was first spotted two weeks ago at Planned Parenthood and also showed up at an immigrant solidarity event in Tacoma to take pictures of attendees. After he took photos he was observed hanging out seemingly comfortably and at home at the Rialto Apartments at 311 S Ninth Street in Tacoma. 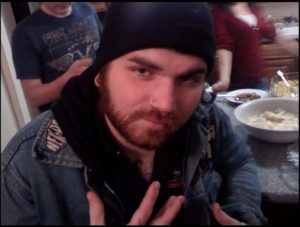 Cameron Heugly – Lives in Olympia and Tackled people from behind.

Jake Andrew Farmer, New Light US – Lives in Vancouver, Washington. Has a collarbone tattoo reading “Count Your Blessings” and a blue star behind one ear. 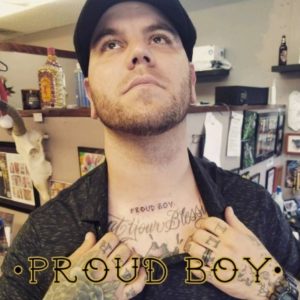 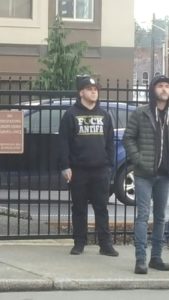