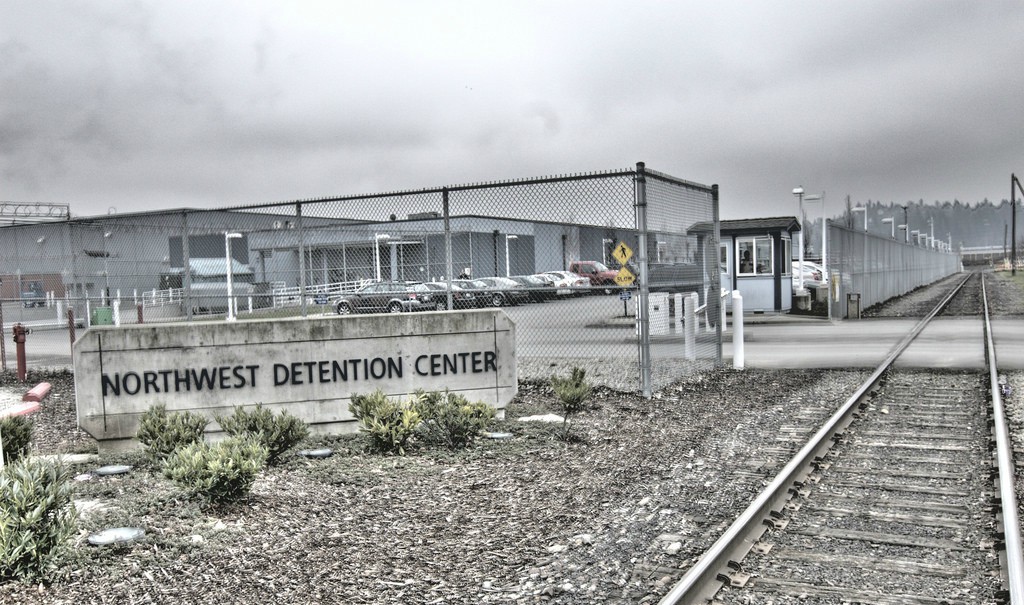 Between 120-150 people detained at the Northwest Immigrant Detention Center in Tacoma, Washington, have launched a hunger strike and work stoppage. The facility has been the site of ongoing strikes, encampments, and protests.

Supporting the strikers is the group Northwest Detention Center Resistance (NWDC Resistance), which includes Maru Mora, a longtime anti-deportation organizer who spoke with IGD on our podcast back in May of 2017. Currently, Maru also faces the threat of deportation herself, after being targeted by ICE for her long time organizing.

According to the Northwest Detention Center Resistance Facebook page:

Tacoma, WA – At least 120 detained migrants in four units at the Northwest Detention Center (NWDC) have begun a hunger strike to protest the abuses they face inside the facility, which is owned and operated by GEO Group, a private prison company, for Immigration and Customs Enforcement. The strike comes at the heels of a work stoppage on Wednesday February 7th by detained people who work in the kitchen and just days after NWDC Resistance held a People’s Tribunal in front of the NWDC.

Leaders of the strike report continued inhumane conditions and abuse at NWDC. Strikers are demanding GEO Group provide edible, nutritious food and emphasized the egregiousness of GEO’s practices by saying “food has gotten so bad it makes people sick. Food served in the hole [solitary confinement] is hardly enough, as we received smaller portions than people in general population.” The use of isolation, particularly as a form of retaliation, is a prevalent issue at NWDC. Strikers have also reported that GEO guards constantly search the beds and units of detained people without reason nor explanation and demand an end to these searches.

In addition, strikers demand ICE provide fair hearings and lower bonds, particularly in light of recent bond amounts as high as $35,000. This contributes to ICE’s practices of indefinite and prolonged detention, as do excessively long delays in carrying out deportation orders. Together, these have the effect of keeping people incarcerated and growing GEO’s profits.

Lastly, strikers delivered a message of resistance and called on others to join their efforts, “We are used to retaliation and intimidation, we are placed in the hole constantly, but no more! We need everyone to join us and stop working!”

NWDC Resistance activists and allies will mobilize to support strikers at the Northwest Detention Center. For live updates on the strike, visit https://www.facebook.com/NWDCResistance/

On February 9th in the afternoon, a video update was published by NWDC Resistance on their Facebook page, documenting that another unit of detainees has joined the hunger strike and work stoppage. NWDC Resistance organizers say that strikers have already faced repercussions for engaging in the strike, and report that two people have been beaten up by GEO Group guards.

NWDC Resistance organizers also report that more units are set to join the strike in the coming days. NWDC Resistance is calling on supporters to rally outside of the Tacoma Immigrant Detention Facility on Sunday, February 11th. More info can be found here.