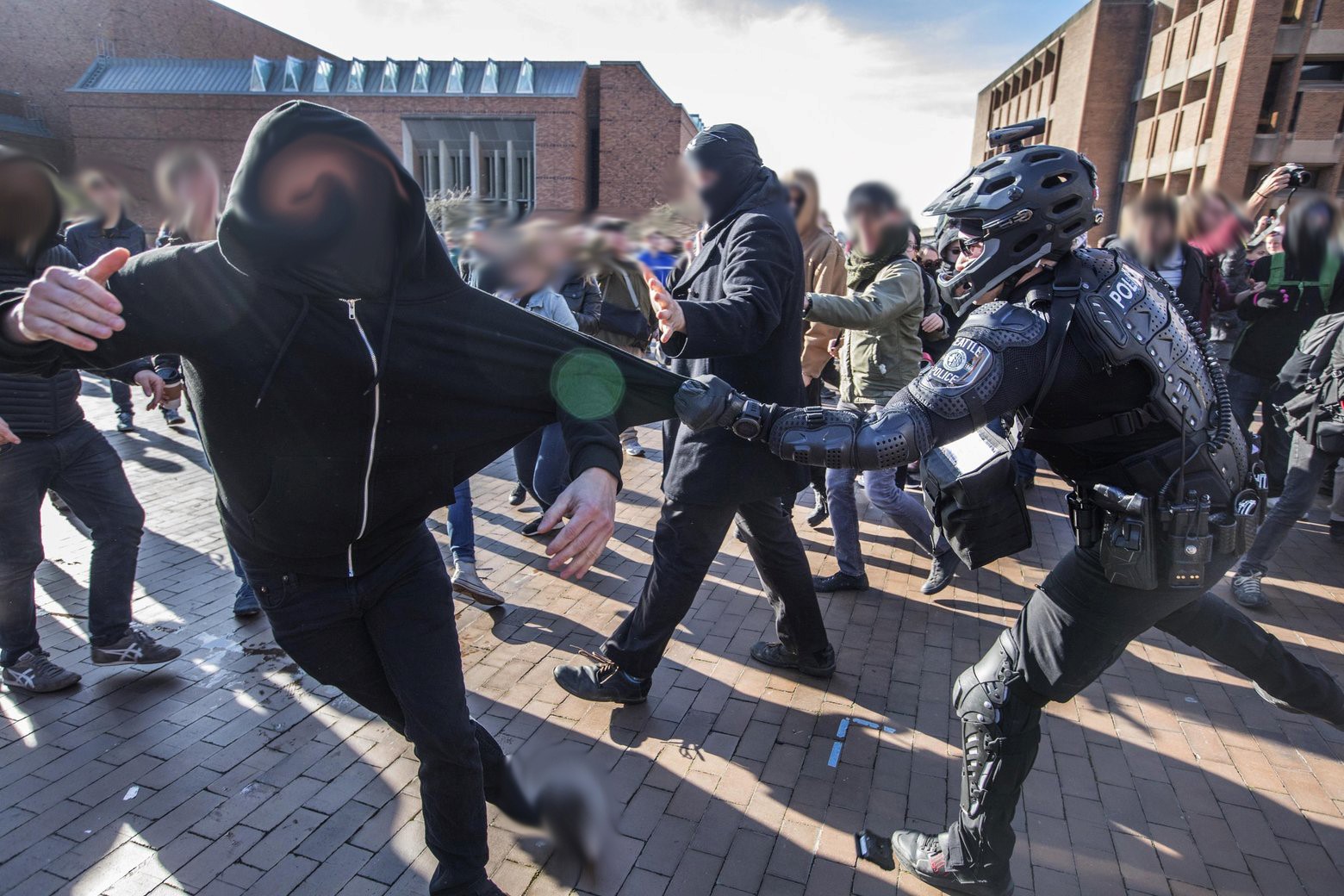 On Saturday, February 10th, multiple groups of fascists and far-right conservatives converged in Seattle, WA (occupied Duwamish territory) at Red Square in the center of UW’s campus. A call for anarchists and anti-fascists to oppose this gathering was posted nearly a week prior. The occasion for such a gathering was a “Freedom Rally” that the UW College Republicans had invited Joey Gibson and his group Patriot Prayer from Vancouver, WA to attend. The fascist creep that has been edging its way into the patriot movement for the last several years in the pacific northwest has been well documented by Rose City Antifa, among others. With this in mind, anarchists and anti-fascists took it upon themselves to organize last-minute efforts to sabotage this gathering of fascists and their more center-leaning accomplices. Sure enough, a handful of different fascist and fascist-leaning right-wing groups converged together on campus; The Cascade Legion, Proud Boys, Patriot Prayer, UW College Republicans and various groups of militia-wannabes who patrolled the perimeter of Red Square in their olive-green army fatigues.

The rally was scheduled to happen from 1pm-4pm on Red Square, and attendees were spotted parking their cars in the surrounding neighborhood hours before the event. The police were well amassed for this gathering, they understood that counter-protesters would wish to swarm the rally and shut it down. Metal barricades were laid out throughout Red Square early into the morning, setting up multiple barriers preventing any counter-protest from physically reaching the so-called “Freedom Rally.” Signs were set up outside of Red Square alerting attendees and counter-protesters alike that weapons were prohibited from being taken any further. Ana Mari Cauce, the president of the UW administration, had sent out an email in the days leading up to the rally, declaring that the college administration was anticipating violence from groups outside of UW’s community, and had canceled every other event happening on campus that day (including multiple Black history month events). It should be clear to the reader the irony that in an attempt to create safety on campus, the UW administration cancelled Black history month events so that they would not clash with a White nationalist gathering. Despite the fact that her sibling was murdered for organizing an anti-KKK rally in North Carolina on November 3rd, 1979, Ana Mari Cauce remains complicit in providing a platform for fascists to organize on UW campus. 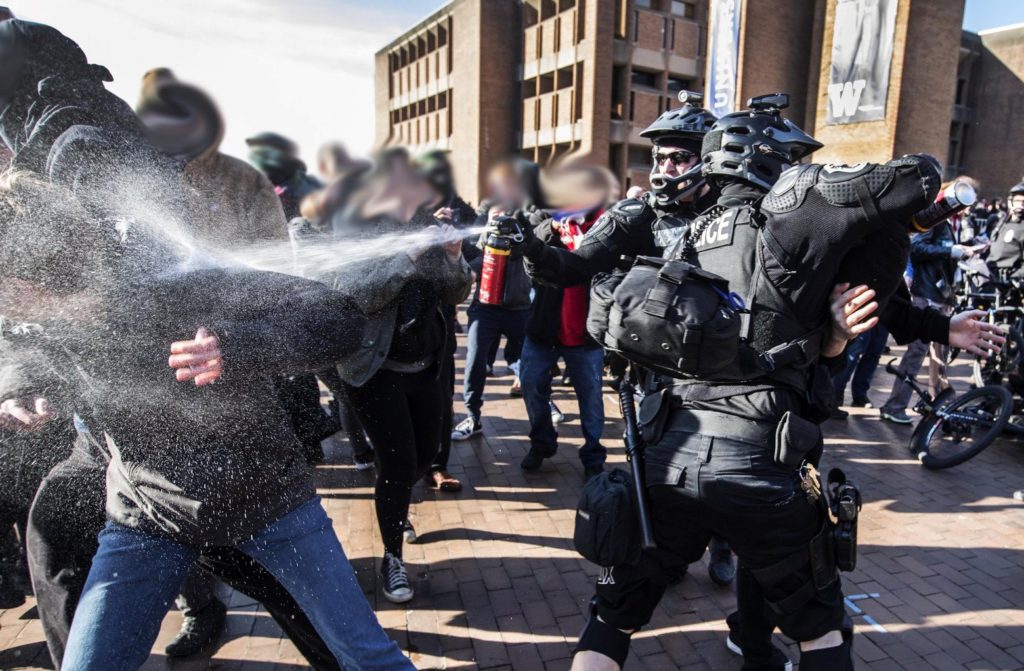 For about an hour and a half, the predictable screaming-match of rallies took place in Red Square. The Stranger reported that about two dozen attendees came out for the “Freedom Rally,” while they were sorely outnumbered, perhaps 4 to 1. The typical shouting matches from across police lines happened, but escalated slightly when local white nationalist bedfellow Kyle Broussard tried to mingle in the crowd of counter-protesters and hold an argument with someone. It didn’t take long before he was pushed out, hit with pepper spray and a fist, and a camera was taken from a live-streamer who was rolling with him. Shortly afterwards, a contingent of Proud Boys started to make their way out of the barricaded safety of the “Freedom Rally” and were escorted out of Red Square by a phalanx of cops, who pepper-sprayed counter-protesters and made a handful of arrests.

Tensions kicked up as things moved away from campus and into the streets. When Tiny, Anthony Bell, and other Proud Boys who rolled with them came upon their truck parked in a parking lot on University Ave, they found that two of their tires had been deflated (surprise, surprise). “We always get our tires slashed!” was heard as two of them ran off to check on their giant yellow hummer that was parked in another lot up the alley way. Another group broke away from the truck, determined to find who had damaged their vehicle. What happened next is hard to discern, as violence happens fast and chaotically. Tiny, Anthony Bell and a handful of Proud Boys happened upon a small crew of anti-fascists, some in black bloc, and a fight broke out. Pepper spray was utilized, but according to video some of the bigots in the fight were wearing eye-protection and kept swinging. According to the same video, Anthony Bell had his head split open by a glass bottle, and other Proud Boys were hit with extendable batons. Good work, comrades! The fight dissipated as quickly as it began.

This crew of bigots limped back to their truck and soon after roughly two dozen cops arrived on bike with an emergency medical team quickly behind to treat the wounded chauvinists. To the knowledge of the author, no arrests were made in relation to this particular fight.

This past week was in particular a physically and emotionally trying week for anarchists and anti-fascists in the Pacific Northwest. Anarchists in Olympia were hit by a car and had a gun pulled on them during an anti-police demo in response to the police killing of someone mid-mental-health-crisis, and two days later suffered a beatdown by Proud Boys and members of Patriot Prayer as they defended Planned Parenthood from yet another anti-choice rally. With this in mind, we celebrate this violent retribution but also acknowledge that smashing fascism is not a zero sum game. Much as capitalism will not be smashed if we simply multiply x number of hammers by y number of windows minus n property destruction charges, we cannot operate as though halting fascism (let alone all forms of governance and control) is a matter of doling out more concussions than we receive. That isn’t to say that hammers shouldn’t be applied to windows, or that we should allow fascists a platform, but rather a proposal for conversations about broader strategy, as well as the promotion of anti-racist and anti-fascist cultural events. When we gather at the time and place of their choosing, surrounded by police, to yell back and forth and occasionally scuffle, are we actually taking away their platform? We lacked either numbers, tools, or the will to overrun the police to then send Patriot Prayer and their ilk packing on Saturday. This is a proposal to think about what can be done with the numbers and tools that we do have, and to train with friends and comrades to develop the will to do what needs to be done.

If a call to oppose this particular rally had gone out farther in advance, would anti-fascists have been able to better coordinate our efforts in sabotaging the rally or its attendees? As much as we would all have loved to have done just about anything else more rewarding than stand and yell at Joey Gibson & Chevy Swanson, we can no longer afford to hope that a simple gathering of idiots will go without consequence on us or legitimately marginalized communities.

The Alt-Right has long ago proven their proclivity to violence. As such, dialogue and discussion should never be an option for anti-fascists. Videos from Saturday show multiple counter-protesters engaging in certainly well-intended but ultimately futile attempts at reason with Kyle Broussard and others, who has been documented attacking anti-fascist protesters. Other videos show anti-fascists in black bloc attire standing directly in front of Proud Boys simply filming them with their phone, only to have their phone knocked out of their hands and then their head knocked as well. Dialogue, appeals to reason, and cameras have have more often left us vulnerable to their violent assaults. The time is now to put down your camera and pick up your hands.

One final note; pepper spray is not a magical chemical weapon that completely neutralizes your opponents, especially if they are wearing protective eye-wear. If you whip out pepper spray and use it, please comrades be prepared to start swinging and/or start running. What worked weeks ago are tactics we should move forward from and develop upon, not rely on tirelessly.

Regardless, the authors send love, solidarity and compassion to the courageous street-fighters of the Pacific Northwest this week. We are all uplifted by each other. Solidarity with the comrades in Russia under the weight of state repression and the Italian anti-fascists who amassed in the streets this week.