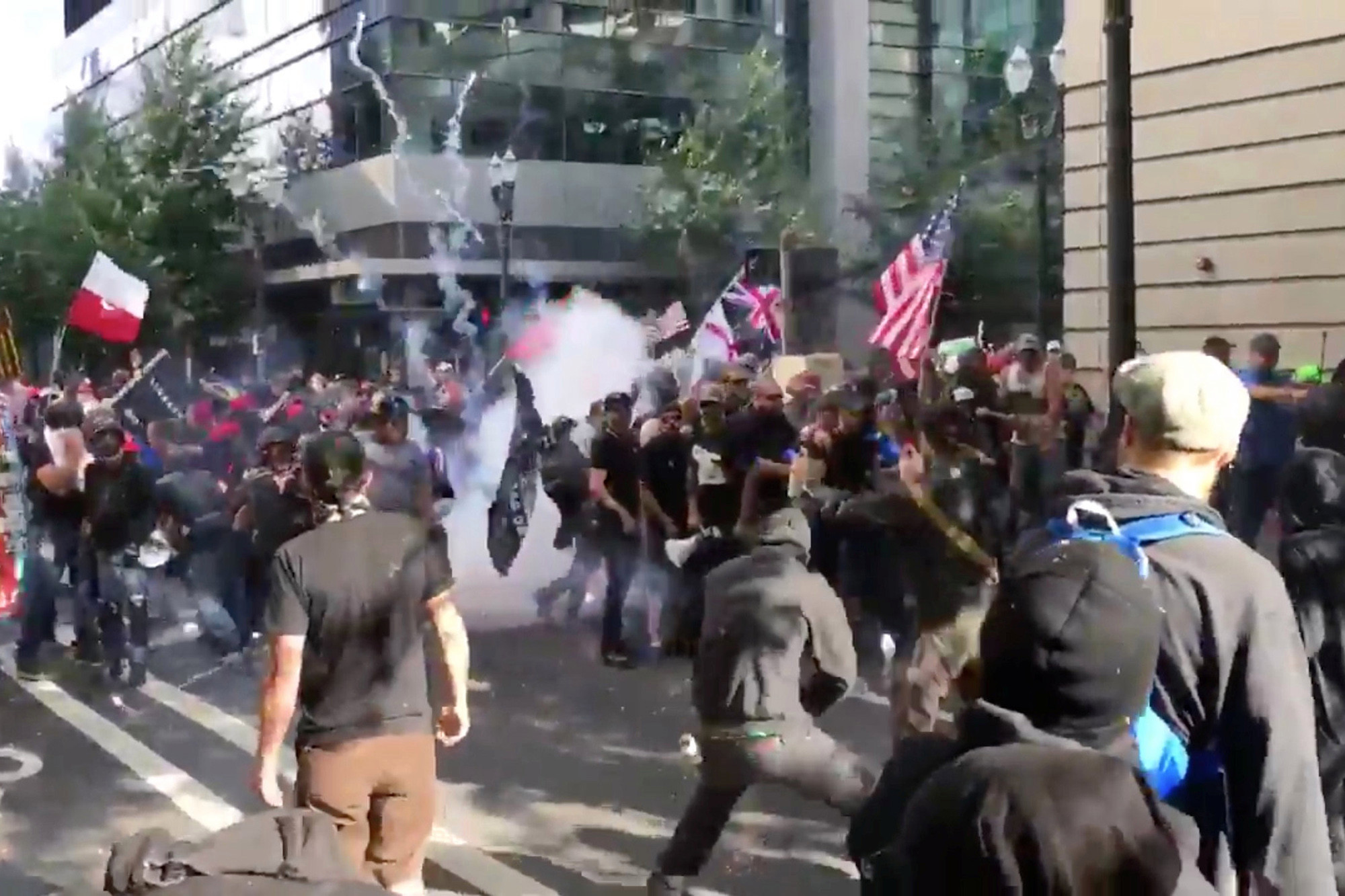 On June 30, on a day of nationwide demonstrations against the brutality of ICE (US Immigration and Customs Enforcement) and borders in general, fascists mobilized around the United States to march through downtown Portland protected by a massive phalanx of riot police. The ensuing clashes were reminiscent of the fascist mobilizations of 2017—especially April 15 in Berkeley and June 4 in Portland—but even more egregiously violent. Portland police already wrote the playbook on coordinating with fascists, but this time they opened their lines to let the fascists charge demonstrators, then attacked those the fascists had just attacked. From now on, every movement that attempts to come to grips with the violence of the state—such as the recent wave of protests against ICE—will also have to deal with the violence of grassroots fascists protected by police. Let’s organize to make sure we’re prepared for the trouble ahead.

Here follows a full account from our comrades in Portland.

In Portland, OR, on June 30, Joey Gibson, Patriot Prayer, Proud Boys, Nazis, and the usualassortment of alt-right nationalists showed up to hold a “Freedom & Courage Rally” at Terry Schrunk Plaza at 4 pm. The event description was bizarre. It was almost Pentacostal in tone, speaking of “cleansing the streets of Portland” and finishing with a declaration: “WE WILL MARCH NO EXCEPTIONS.” They advertised that they’d confirmed participants from Washington, Oregon, California, Arizona, Texas, Massachusetts, and Florida, all the while pleading with the Portland Police Bureau for “fairness.” They had been run out of town earlier in June, apparently denied the police protection from anti-fascist demonstrators to which they’d grown accustomed. The irony of an overwhelmingly white ultra-nationalist group whining about “unfair” treatment from the police is hilarious, especially since the Portland Police riot line always faces the anti-fascists and police always attack and arrest anti-fascists—they never attack or arrest the fash. Cops and Klan go hand-in-hand, right?

The demonstration started off as usual. In Portland, the fascists rally on federal property (for their own protection, obviously) in the middle of downtown: Terry Schrunk Plaza. Anti-fascists assemble in the park adjacent to Terry Schrunk—it’s called Chapman Square. Since the police are quite aware of the dynamics involved with the demonstrators, they lined Madison Street, facing the anti-fascists in Chapman Square. As Portland has been on high alert because of the #OccupyICE protests for the past three weeks (and Terry Schrunk is federal), DHS (Department of Homeland Security) officers made their reappearance. They arrived wearing the federal government’s finest repression gear—caged helmets, masked faces, three-foot batons, pepper ball guns, and so on. A notable difference was that this time, the DHS police were organized into different teams, indicated by a stripe on the back of their helmets. The fascists also had their Halloween costumes on, ranging from a full-blown Pepe/Kek worshiper who looked like a wrestler to 3%ers (remember them helping police with arrests last summer?) wearing what looked like real combat gear. And they call anti-fascists LARPers?! Even Based Spartan made a re-emergence.

Anti-fascists taunted them with megaphones and chants, and the Unpresidented Brass Band provided a situationally-appropriate soundtrack, complete with “sad trombone” effects and a sousaphone every time one of the braver fash decided to “come talk” to the anti-fascists. Signs and banners were everywhere, and the bloc was a sprawling front line of roving fighters. The air was electric and numbers were clearly on our side, which always leads to one thing—state repression. One small group of anti-fascists were attacked by the fash, so the police responded by emptying what appeared to be pepper ball guns at the anti-fascists. This set the tone for the subsequent actions of the police.

Twenty minutes later, police announced an official state action and the code under which it fell, and described the potential consequences if anyone chose to violate them. Essentially, they were warning anti-fascist demonstrators what to expect. This is certainly uncommon. It must have taken place because of the presence of major news outlets, and perhaps because the local police were working so openly with DHS. This action was to set up a police line and clear the street adjacent to the fascist demonstrators.

The fascists formed a self-described phalanx, which took about twenty minutes to assemble. Then they immediately began marching towards Chapman Square at full speed. The initial clashes were mitigated by police presence and the speed of the marchers, but there were visible amounts of trash and sticks flying through the air. The fascists turned towards the river, then turned back towards their original direction. It initially looked like they were establishing a serpentine reach, but instead they stopped after several blocks. Anti-fascist demonstrators had kept up with them the entire time, but kept a city block between both parallel marches. Anti-fascists grabbed street signs, barricades, construction barriers, and large sheets of wood to create barricades every time the fash attempted a charge. Then, as the fascists stopped and turned several blocks later, both groups began marching towards each other. A small group of anti-fascists broke off and there was a scuffle, followed by the anti-fascist charge.

It’s important to note that the fascists charged through police lines with the express intention of attacking anti-fascist demonstrators. And the police allowed them to. Remember all that equipment? Nothing was deployed against the attackers.

Today was not a typical day in Portland. This is a good indicator of what anti-fascists are up against. The level of physical and psychological intimidation from groups of goons who train together was overwhelming. This phenomenon should be familiar to us from history. During the previous rise of fascism, state power was transferred to what were essentially street gangs (think of the SS). June 30 was an example of that phenomenon recurring—perhaps the most visible I have personally seen in Portland. The scene was reminiscent of the fascist demonstrations in Berkeley in 2017; but with no police or physical objects to stop the rivers of demonstrators, the initial clash was brutal.

Fireworks and mortars, bear mace, bludgeons, and weighted gloves were among the most visible weapons. The “Berkeley Charge” was repelled by the sheer numbers of the anti-fascist demonstrators and their advantageous positioning, but to be sure—the fascists were there to attack them at all costs. The sheer amount of blood spilled by both sides was unsurprising due to the fascists’ consistent state-backed escalation of violence. There were multiple beatdowns from both sides during this initial charge, and both sides peeled back momentarily. The fash left their front line entirely too far into the anti-fascist line, and they realized it and turned back. The police immediately used flash-bang grenades. Five minutes later, it was a declared a riot.

Both groups continued on the same trajectories as before and met up again several blocks later. The skirmishes continued for the next hour all throughout downtown. Finally, when the crowds arrived back at the original location (Terry Schrunk and Chapman Square), the state was able to repress most of the ant-fascist defense, while allowing the fascists to continue attacking intermittently. Since the demonstration had been declared a riot, state forces effectively cancelled the Patriot Prayer event by forcing both groups to march on the sidewalks. In the final scene, the remaining anti-fascists chanted “BYE BYE NAZIS” as the fascists mounted the singular vehicle they’d arrived in.

Yes, that’s right—the fash brought a big yellow school bus. What version of reality are we in right now? The situation is bizarre, comrades. This is fascism.

It is worth noting the degree of collaboration between the fascists, the police, and the state. All three groups were visibly interfacing, coordinating, and collaborating. The transfer of power and state enforcement has already begun. Everyone should remember that Joey Gibson is a real estate agent and a wanna-be politician, and assuredly there were other politicians and would-be politicians within the Schrunk Plaza alongside him today.

Still, Portland had the numbers and the spirit on its side today against fascism. Anti-fascists gave no platform and no space, and even the state couldn’t protect the fash—although they tried as hard as they could.

The police tried to repress anti-fascists from the start. They attacked, they threatened arrest and violence, they allowed the fascists to stream through their lines to attack us. There was no holding back from either side today. And Portland held it down.