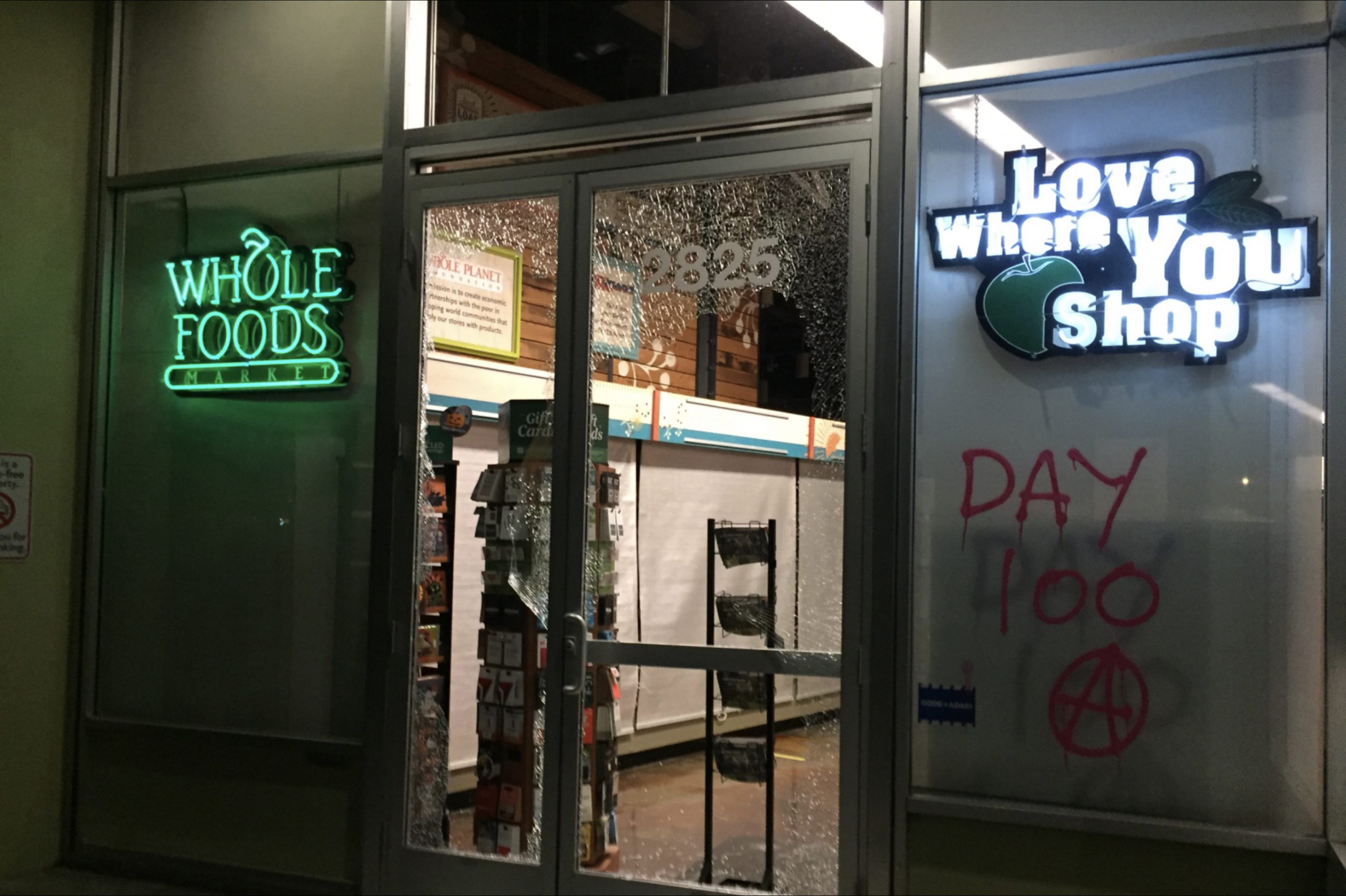 Last night, while our comrades battled the police in the street, some anarchists targeted multiple Whole Food stores as well as Starbucks in a synchronized attack, just as the clock struck midnight. The cops have made public statements addressing how they are not responding to 911 calls due to their focus on brutally attacking and arresting protesters. Using this to our advantage, we spread out around the city with the intention of sending two messages:

First, to our comrades: The past 100 days with you have been inspiring, wild, traumatic, and everything in between. Our collective strength in the streets has surpassed everything we ever expected to come out of this city. For 100 nights we have fought the police – but the police are not (and should not) be our only target. Capitalism feeds the police state. The police developed out of slave patrols; slavery is the backbone of capitalism. We smashed Whole Foods because we are against capitalism in all its forms, and because we want you all to know that autonomous actions are not only possible, but they are happening and they are an integral part of how we remain uncontrollable. As the police response to the demonstrations becomes more organized and more brutal, autonomous actions become ever more important. Sometimes, it feels like we cannot act unless there are a hundred, two hundred people. Don’t underestimate your own abilities! It takes only one person to act; two to make an affinity group; three or four to get the job done faster. The more of us who act independently, the more small actions spread across the city, the less the police know how to respond; the less they can contain us; the less they understand us. Get your friends together, make a plan, carry it out. We’ve got your back.

Secondly, to the police: You are powerless in suppressing small cell autonomous actions, and as the inspiration and experience of our accomplices grows, you will learn that. You cannot patrol the entire city. We will find the places you are not, and we will attack them. We will move while your eyes are closed. Being the descendants of slave masters, your complete destruction is what we seek, and we will settle for nothing less. Whole Foods represents everything we despite about this world. Owned by the richest man in the world, and selling products made by the slave labor of prisoners. Every cop is a target. Every capitalist is a target. Every bank, every precinct, every courthouse, every condo, every yuppie haven.
It is our hope that others take advantage of the windowless and doorless Whole Foods around the city to feed themselves, their families, their friends and their communities. We should not have to pay for food to survive, and yet you beat, tase, arrest and sometimes murder those who take food for free. You protect the capitalists at the expense of our lives. One day, hopefully soon, we will dance amongst the soft glow of a burning empire, while you both drown in the stagnant pond of your pathetic, miserable lives. Good fucking riddance.

See you at the barricades, friends.
For Black liberation & against property, love,
some anarchists