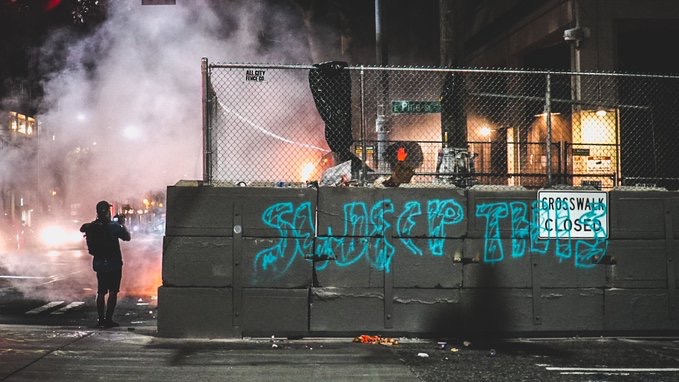 In the morning hours of Tuesday September 1st, Seattle Parks Department and Seattle Police initiated a sweep of unhoused people staying at Cal Anderson Park and the soup kitchen and community center set up in and around the previously abandoned (and now repurposed) shelter-house at the center of the park. Police pushed people out of the area surrounding the shelter house, making several arrests and claiming the park was closed while people could be seen working out and walking their dogs on the other side of the field. Seattle Police also confiscated a cache of shields, as well as spike strips. Seattle Parks employees confiscated tents, clothes and camping gear, only to throw them in a garbage truck, while snacking on food donated for the Shelter House and unhoused people with Seattle Police. Several arrests were made.

Shortly after, a flyer started circulating social media calling for a demonstration later in the evening. Around 8/9pm, a crowd of 30-50 people in black bloc gathered in Cal Anderson Park, nearby where the Shelter-House previously stood as a repurposed center of Mutual Aid, now welded shut and surrounded by fencing. Video was taken of Seattle Police with what appeared to be private security attempting to enter Cal Anderson, and they were quickly shouted down and pressured to leave.

Police then drove circles in a large caravan around Cal Anderson, lights flashing and blaring sirens, in a bizarre show of power.

While the police are well known for terrorizing impoverished communities and killing with impunity, the other arms of the municipal governing body are not. Nonetheless, it was Seattle Parks Department that initiated the sweep of the Mutual Aid Shelter House and Capitol Hill Community Center at Cal Anderson Park, utilizing Seattle Police as a buffer between their workers and rightfully angry community members. The City of Seattle has made it clear that the war on the poor is far from over. As one livestreamer pointed out, unhoused people who previously had a place to sleep with tents and were provided breakfast and dinner on a daily basis are now left to sleep out in the open, while the better-off residents are allowed to “recreate” in the park.

The city decides what forms of life are undesirable and punishable by use of force, the police are simply the hired guns. Fuck the city, fuck the police.