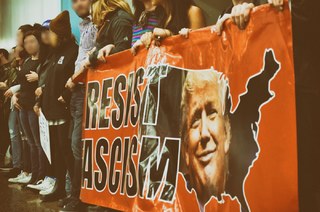 From CrimethInc
Reports said that thirteen people from various countries were detained as they exited planes at Sea-Tac Airport outside of Seattle. Area folks quickly mobilized to occupy the airport. Within hours, local media was estimating the crowd to be around 10,000 people, numbers that had brought operations at the airport to a standstill. A handful of arrests took place in the early hours, and police pepper-sprayed people repeatedly.

Around 9 pm, the Socialist Seattle City Council member Kshama Sawant, no stranger to co-opting grassroots movements, called to the crowd of thousands to leave the airport in favor of a rally in downtown Seattle the following day. Unfortunately for the folks who believed that the site of detention was the appropriate front to fight on, many people heeded this call, undermining the protest and leaving the rest of us vulnerable to the cops who now outnumbered us.

In the hour leading up to midnight, the cops were fairly passive, mostly just staring at the two groups of people that had earlier been separated from each other. But around 12:30 am, they announced that they would be moving on us. We were quickly kettled, with our backs to a balcony and one escalator as the only means of escape. The crowd of around 100 held the line for several minutes until the cops began indiscriminately pepper-spraying people directly in the face, leaving them to blindly stumble down a stopped escalator.

While we heard that several of the detainees had been released from Federal custody, around two dozen protesters were arrested. The arrestees were immediately transported to the light rail station and released—though the light rail was done running for the night.