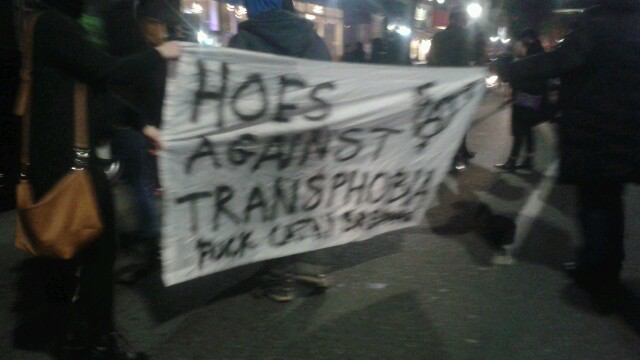 Cathy Brennan is a leading voice of the anti-trans “radfem” movement, a group of people who under the facade of feminism do their best to harass trans women and sex workers. When not outing underage trans people, doxxing trans women, threatening lawsuits against those who identify her as the transphobe she is, supporting the police as they criminalize sex work, and being an all-around piece-of-shit fake goth, Cathy Brennan works as a payday lending lawyer. Payday loans are notoriously predatory financial institutions that force people of color into cycles of debt. It’s clear that her allegiance lies with the owning class, the bashers, the fascists who insist that biology determines destiny, capitalist white supremacy, and the police.

For some reason, Cathy Brennan has been in Olympia for the past few days. She was spotted barhopping downtown two nights ago and harassing a group of trans women and then calling the cops on them. We’ve also received reports that she was 86’d from multiple downtown establishments, which is great. No platform for transphobia, no room for transphobes!

Many people found Cathy Brennan’s behavior unacceptable. Last night there was a demonstration against her, in solidarity with trans women and sex workers. Approximately 50 people converged at 4th and Adams for what turned out to be one part affirmation that trans women’s lives matter and one part antifascist patrol in case Cathy Brennan came downtown again. A large banner read “Hoes against transphobia – fuck Cathy Brennan.” The crowd was a mix of trans women, sex workers, queers, anarchists, feminists, and accomplices. We took the streets and marched down the bar strip. Reception from bystanders was mostly positive, with the exception of a few bros with whom people engaged in minor scuffles. We chanted things such as “Trans women are real women! Cathy Brennan’s a fake goth!” Fliers were distributed which read the following:

TWERFS: Trans (Women) Exclusive Radical Feminists make a hobby or career of harassing trans women. They have been known to:

TWERFS argue that trans women should not be in women’s spaces because they are ‘socialized male’ and have ‘male privilege’.
Gender socialization is real, but is different for everyone. For most trans women, being punished for acting feminine while being perceived as male far outweighs any advantages. In grade school, 78% of trans people report harassment, 35% physical assault, and 12% sexual violence.
Trans people are 4 times more likely to live in poverty than cis counterparts. They have double the rate of unemployment and 90% reported discrimination in the workplace, with at least one in four losing a job due to discrimination.
One in five have experienced homelessness.
53% report harassment in a public accommodation.
19% report outright refusal of medical care.
41% have attempted suicide.
Other oppressions compound with transphobia, with trans women of color bearing the brunt of harassment, discrimination and violence.

Stats from Injustice at Every Turn: a Report of the National Transgender Discrimination Survey.

After about 45 minutes of marching, chanting, flyering, and scuffling with bros, the cops showed up in force with their “less than lethal” rifles and pepper spray drawn. The vibe was decidedly pissed. Many in the crowd seemed determined to stand their ground against both the bros and the cops. Unfortunately many people did not come prepared for that level of escalation and the crowd thinned. Eventually the tension diffused and the demonstration dispersed without any arrests or injuries. In the wake of multiple fascist shootings in the last week – as well as a long history of police violence – the climate of fear is real. It’s hard to walk the line between bravery and recklessness, and hard to figure out whether a situation is really a mass beating/arrest waiting to happen or if that’s just your personal triggers from getting hit with rubber bullets or seeing someone get shot. Those who have more experience in the streets should do their best to share tactical and material knowledge so that those who want to throw down can do so harder and more safely.

As important as it is to go hard in the streets, we must also be tender with each other in our day to day lives. As the far-right continues to escalate violence against those who were already struggling under neoliberal democracy, let’s find a plethora of ways to simultaneously take care of each other and fight back. On their 2012 book tour, the editors of Queer Ultraviolence: Bash Back! Anthology spoke of the need for a criminal queer tendency in the age of austerity. They write in the conclusion to the book:

The daily use of violence by queers for the purposes of survival, self-defense, or vengeance is often hidden or obscured through a whole array of closeting apparatuses. Generations of queer street gangs, armed whore communes, bank-runs to support AIDS victims, brick-hurling queens – these have been forgotten by all, except in the form of heretical mythology passed from lover to love. […] For Bash Back!, the use of violence as a part of resistance and survival is always something to celebrate[…] Teen suicide, queerbashing, AIDS genocide, exclusion at borders, enslavement in prisons: the violence experienced by queers is multiform and evolving. As such, resistance to that violence must also be fluid and diffuse.

Let’s continue to take the streets; but let’s also communize self-defense training, pepper spray, and stun guns; share food; check in with your friend when they get home from seeing a john; make sure trans friends have bathroom buddies when they need them; have the hard conversations about racism with clueless friends or punch a bigot depending on what’s appropriate in a given context; share hormones; scam healthcare; scam housing. We’re gonna need to have each other’s backs in the days ahead.