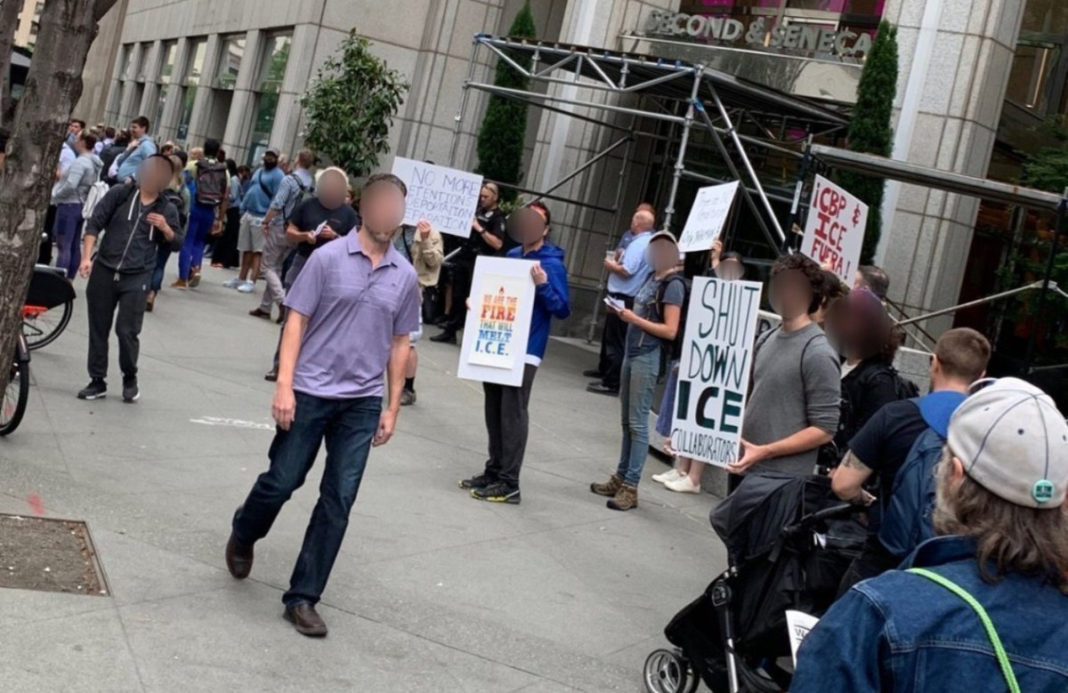 From It’s Going Down
The following action report details a recent bank shut down which was part of the call from #BlocktheWall to protest banks profiteering from mass detention, deportation, and family separation.

On July 11th, over 30 people picketed outside the downtown Seattle branch of Bank of the West, demanding the bank cut ties with ICE. Protesters attempted to enter the bank branch but were barred by Seattle Police Department (SPD) officers utilizing bicycles as barricades. Shortly after, bank management informed SPD officers that the bank branch had locked its doors. The picket continued for an hour as protesters shouted chants, distributed leaflets to passers-by and continued to block the bank entrance. At 5PM participants in the bank shutdown marched to the Close the Concentration Camps rally at Westlake Center organized by El Comite and May 1st Action Coalition.

Bank of the West is a subsidiary of BNP Paribas, a large bank that provides funding to GEO Group, a private prison corporation contracted by Immigration and Customs Enforcement (ICE) to detain migrants. GEO Group operates the Northwest Detention Center in Tacoma, long a site of resistance and migrant solidarity, both inside and outside its walls. According to recent financial records, Bank of the West’s parent company, BNP Paribas, is listed as GEO Group’s “administrative agent” and is one of its leading lenders. Following activist pressure in March 2019, JPMorgan Chase announced that it would cease further financing of the industry. Wells Fargo, US Bank, Bank of America, and SunTrust have also recently pulled back. Without this access to capital, the future for CoreCivic (another large ICE prison contractor) and GEO Group is in jeopardy.

The bank protest was co-hosted by Olympia Assembly, El Comite and May 1st Action Coalition and was organized in conjunction with the July 8th-12 Week of Action to Shut Down ICE Profiteers.

The week of action encouraged concentrated disruptive protest be directed against financial firms invested in ICE prison contractors, GEO Group and CoreCivic. In a number of cities, the call was heeded with shutdowns at Bank of the West and PNC Bank branches, but also with protests at the offices of ICE-tech collaborators, like Microsoft and Amazon.