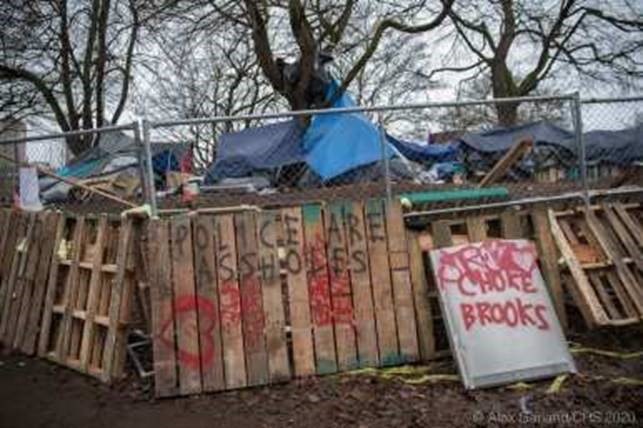 Across Cal Anderson Park, power tools and murmurs of conversation could be heard in the pre-dawn hours as people congregated to add last minute fortifications to an extensive line of barricades in anticipation of a sweep of the park. A legal challenge filed on Wednesday against the sweep was denied at the state federal court level Thursday evening, and an early morning retributive raid was anticipated.

Like clockwork, at 7:30am Seattle Police approached the barricades from the North end of the park on their bikes with a loud-speaker delivering a 15-minute warning to disperse. As some people began to try to wake up the park residents and alert them of approaching police, in an effort to help them save their belongings from being trashed by Seattle Parks and Recreation workers, others rushed to the north side of the barricades to face off with approaching police forces.

Before long, police had approached and cleared the north barricades, chasing off a crew of militants dressed in black bloc. Several windows of buildings belonging to Seattle Central College were seen with cracks and holes after seemingly getting smashed, now boarded up. Seattle Central College President Sheila Edwards Lange had recently signed onto a public letter voicing support for sweeping the park of its houseless residents. Seattle Police continued to sweep through the park, pressing park residents and their advocates out by threat of violence and arrest. As noted in an article from earlier this week, these sweeps normally happen with no advanced warning, often destroying residents’ belongings in the process. While Mayor Jenny Durkan’s office issued a statement this morning claiming to have been attempting to provide shelter for park residents, City Council Member Teresa Mosqueda wrote in a letter admitting that the city had no alternative housing spaces available for park residents while also acknowledging that the sweep violated CDC Covid-19 preventative recommendations.

After clearing the park, Seattle Police took up position outside what became known as the Yellow House, a vacant house across the street from the park that is slated for demolition and had been occupied in protest of the anticipated sweep. A SWAT team moved into the house and swept the property only to find nobody home.

At the time of this writing, Seattle Parks and Recreation employees are actively destroying the encampment at Cal Anderson Park and throwing residents’ possessions into large garbage trucks after promising to carefully catalog and preserve everything left behind. It is abundantly clear that the city government has not the slightest intention of providing shelter for the houseless population in Seattle and would instead continue to further criminalize their existence. A visible houseless population serves as a stark reminder to a city’s denizens of extreme economic inequality, whereas the Emerald City would prefer its shallow veneer of progressive ideals.

Between the barricades at the Red House in Portland and the barricades at Cal Anderson Park in Seattle, the tone is being set for what it may look like to attempt to meaningfully resist forced displacement and police violence and to stand up for our houseless neighbors.