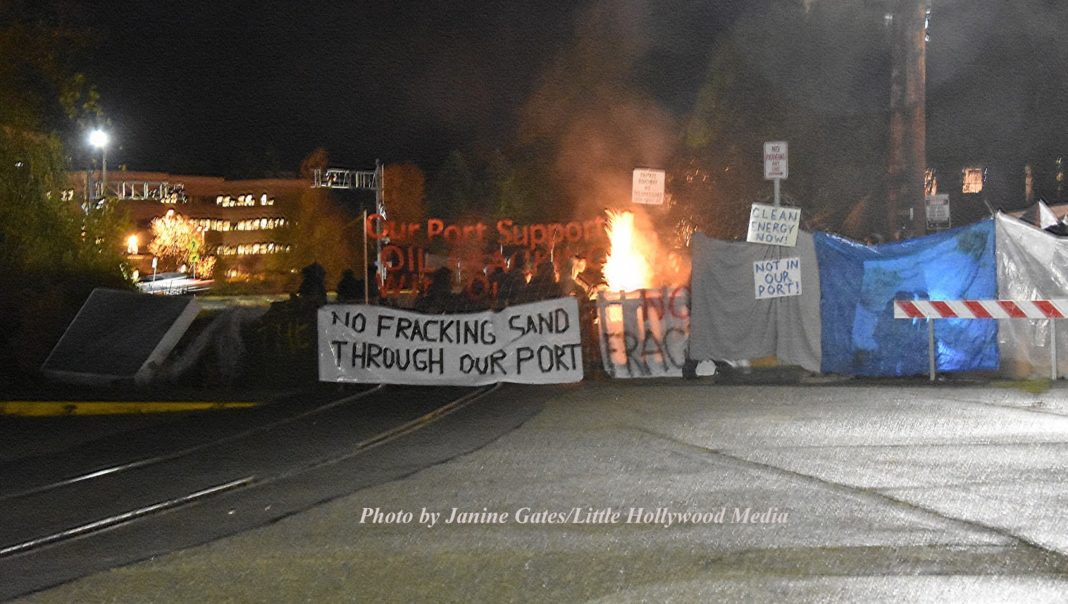 November 17, 2017: A year and a day since the eviction of last year’s blockade of a train carrying fracking sand from the Port of Olympia.
I got home from work at 5pm and had about a million text messages all telling me the same thing: there’s a fracking train blockade downtown. Same place as last year. Come down.

I was exhausted, cold, and wet from work, and had plans to do Shabbat with friends, but I wouldn’t miss a railroad blockade for the world. “Shabbos at the blockade!”, I told my friends. If stopping a train full of materials used in the destruction of the environment and genocide of Indigenous people isn’t Tikkun Olam, I don’t know what is.

I hopped in the shower, changed into dry clothes, grabbed an energy drink, and trekked downtown. The barricade on the tracks and around the camp was already big and sturdy when I got there, and through the night it continued to grow. Inside the camp I found a pop-up canopy with food, zines, and bedding, numerous tarps to keep off the perpetual Pacific Northwest rain, couches, a roaring barrel fire, and a shit-ton of people, many with faces covered. A local politician showed up and over half the encampment came to the front to heckle him by name until he left. Someone was playing Chumbawamba’s “Anarchy” on a set of speakers. “This is incredible,” I told my friends. “I’m never leaving Olympia again.”

The atmosphere at the encampment was both festive and post-apocalyptic. Pizzas and pallets flowed in throughout the night. A truck or van would pull up with supplies and instantly a crowd of people would unload it and take materials where they were needed. People were playing chess and cards, dancing, fortifying and painting the barricades, snacking, talking to new and old friends. I was reminded of the stark contrast between the brutal grinding horror of trains, resource extraction, genocide, capitalism, and the state, and the joy of sharing, friendship, crime, and anarchy.

A crew of my friends showed up. We lit a pair of candlesticks stuck into the gravel, passed around a mini box of wine, and appropriated a cracker from the snack table to sing the blessings over the candles, wine, and challah. All around us people continued to move supplies, hang out with their friends, and fortify the barricade.

I moved the candles over next to the couches on the tracks where they were soon joined by more candles, then I went to warm up next to the fire.

There was a general assembly at some point that was far less excruciating than I expected. Although the discussion started with a lot of proposals for various committees and working groups that I largely tuned out, there ended up being good conversation about why demands are unnecessary and counter-productive. A “media representative” or “messaging group” proposal was shot down. Of course at some point there will probably be someone who claims to speak for the entire blockade, but there were many voices encouraging anyone who wants to write something about the blockade to do so autonomously. People were able to articulate that the media’s job is to discredit the blockade no matter how unified or respectable of a message or demands are put forth. I think it’s clear that the blockade exists to stop a train full of fracking materials. We don’t need some sort of lowest common denominator list of demands or program or points of unity beyond that. Everyone has their own motivations for being here and that’s fine – that’s what gives us our strength. These critiques seemed well-received, the assembly didn’t go on too long, and the debate didn’t get particularly nasty or wingnutty.

I hung out for a little while after the assembly, but soon found myself falling asleep and went home. As of this writing the blockade still stands. If you can make it down there please do! We could always use more food, hot drinks, tarps, tools, first aid supplies, zines, and pallets, but mostly we need people, particularly early in the morning.

See you at the barricades!
-an anarchist