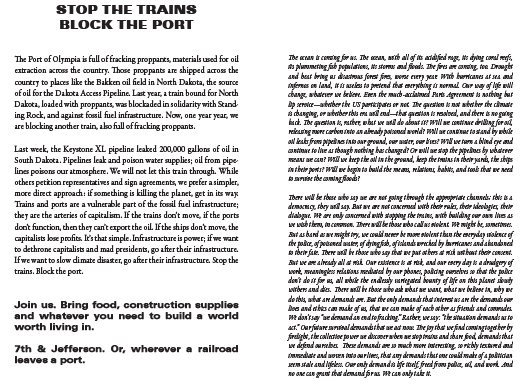 We’ve cobbled together a hasty half-sheet flier to spread information about the ongoing blockade of a train full of fracking proppants in Olympia. Print double sided, flip on short edge, and cut down the middle.

“The Port of Olympia is full of fracking proppants, materials used for oil extraction across the country. Those proppants are shipped across the country to places like the Bakken oil field in North Dakota, the source of oil for the Dakota Access Pipeline. Last year, a train bound for North Dakota, loaded with proppants, was blockaded in solidarity with Standing Rock, and against fossil fuel infrastructure. Now, one year year, we are blocking another train, also full of fracking proppants.

Last week, the Keystone XL pipeline leaked 200,000 gallons of oil in South Dakota. Pipelines leak and poison water supplies; oil from pipelines poisons our atmosphere. We will not let this train through. While others petition representatives and sign agreements, we prefer a simpler, more direct approach: if something is killing the planet, get in its way. Trains and ports are a vulnerable part of the fossil fuel infrastructure; they are the arteries of capitalism. If the trains don’t move, if the ports don’t function, then they can’t export the oil. If the ships don’t move, the capitalists lose profits. It’s that simple. Infrastructure is power; if we want to dethrone capitalists and mad presidents, go after their infrastructure. If we want to slow climate disaster, go after their infrastructure. Stop the trains. Block the port.

Join us. Bring food, construction supplies and whatever you need to build a world worth living in.

7th & Jefferson. Or, wherever a railroad leaves a port.

The ocean is coming for us. The ocean, with all of its acidified rage, its dying coral reefs, its plummeting fish populations, its storms and floods. Thee fires are coming, too. Drought and heat bring us disastrous forest fires, worse every year. With hurricanes at sea and infernos on land, it is useless to pretend that everything is normal. Our way of life will change, whatever we believe. Even the much-acclaimed Paris Agreement is nothing but lip service—whether the US participates or not. The question is not whether the climate is changing, or whether this era will end—that question is resolved, and there is no going back. The question is, rather, what we will do about it? Will we continue drilling for oil, releasing more carbon into an already poisoned world? Will we continue to stand by while oil leaks from pipelines into our ground, our water, our lives? Will we turn a blind eye and continue to live as though nothing has changed? Or will we stop the pipelines by whatever means we can? Will we keep the oil in the ground, keep the trains in their yards, the ships in their ports? Will we begin to build the means, relations, habits, and tools that we need to survive the coming floods?

There will be those who say we are not going through the appropriate channels; this is a democracy, they will say. But we are not concerned with their rules, their ideologies, their dialogue. We are only concerned with stopping the trains, with building our own lives as we wish them, in common. There will be those who call us violent. We might be, sometimes. But as hard as we might try, we could never be more violent than the everyday violence of the police, of poisoned water, of dying fish, of islands wrecked by hurricanes and abandoned to their fate. There will be those who say that we put others at risk without their consent. But we are already all at risk. Our existence is at risk, and our every day is a drudgery of work, meaningless relations mediated by our phones, policing ourselves so that the police don’t do it for us, all while the endlessly variegated bounty of life on this planet slowly withers and dies. There will be those who ask what we want, what we believe in, why we do this, what are demands are. But the only demands that interest us are the demands our lives and ethics can make of us, that we can make of each other as friends and comrades. We don’t say “we demand an end to fracking.” Rather, we say: “the situation demands us to act.” Our future survival demands that we act now. The joy that we find coming together by firelight, the collective power we discover when we stop trains and share food, demands that we defend ourselves. These demands are so much more interesting, so richly textured and immediate and woven into our lives, that any demands that one could make of a politician seem stale and lifeless. Our only demand is life itself, freed from police, oil, and work. And no one can grant that demand for us. We can only take it.”