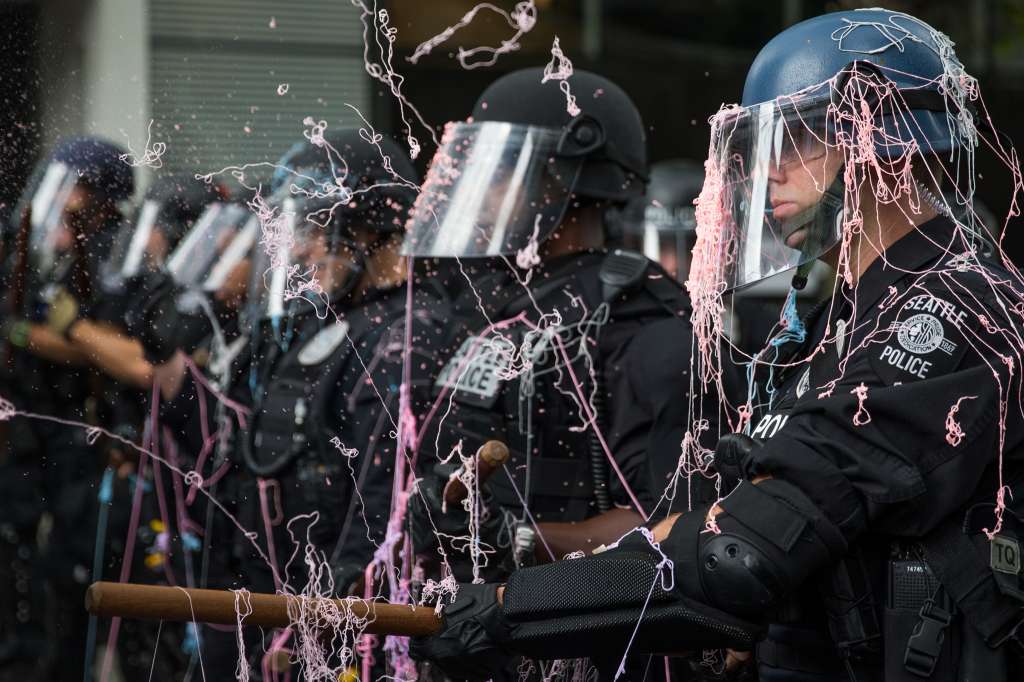 By 1pm on Sunday August 13th, the crowd at Denny Park in Seattle had already reached well over 200 and was growing. People were showing up to attend the “Solidarity Against Hate” rally and march that had been called for by a broad coalition that included Seattle Solidarity Network and Greater Seattle Area General Defense Committee and a number of socialist groups. The march was originally called to oppose Joey Gibson’s rally at Westlake Park, but after the events in Charlottesville, it also served as an opportunity to show solidarity with people there. This report-back was written by a few people who attended this rally and march and reflects what we saw and experienced. It is worth noting however that many people chose to go directly to Westlake Park to oppose Joey Gibson and his agenda, rather than gather with the large march. The authors of this piece can’t say what happened at Westlake because we weren’t there.

Before embarking on the march, people stood around, chatted, and held banners. A few people were wearing masks when we arrived and some liberals were waving American flags near the back of the crowd. The messages on signs varied greatly, with some reading “Go Back To Europe” and “Fuck Off!” while others simply read “Peace.” By the time speakers had taken to the megaphones, lots of people had masked up and the feeling of the crowd was getting antsy. It is worth noting that the speakers who addressed the crowd stressed the need for solidarity with each other, explicitly denounced any peace-policing that might happen. They also stressed the importance of confronting fascism in everyday life in our neighborhoods, at sub-cultural events, and in the streets. 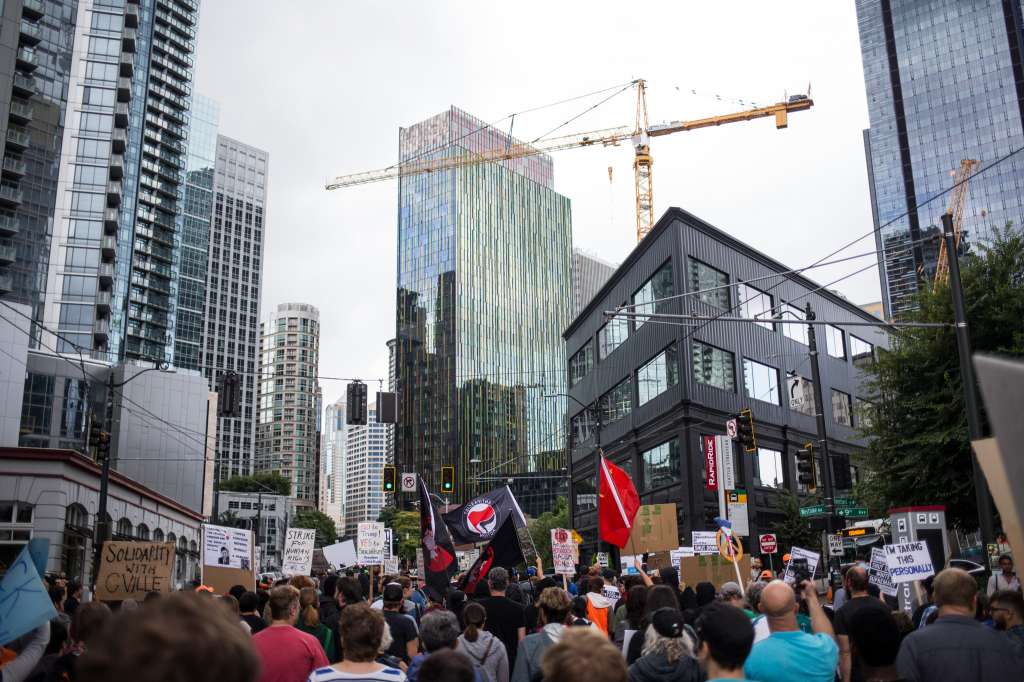 By the time the march left the crowd had grown significantly to at least 500 people. As the march poured into the streets people were energetic, chanting anti-fascist slogans. For the first fifteen minutes the march moved along unobstructed but trailed closely by police who had amassed at the park. As the march moved closer to Westlake, the police began blocking off streets that headed south towards the park where the patriot prayer rally was being held. It was clear that they would not let the march within a two-block radius of Westlake Park. As the march passed between 4th and 5th on Lenora, the front of the march began running down an alleyway in hopes to catch the cops off guard and beat them to the street. This was hindered by the Socialists clamoring over the megaphone and shouting “Not everybody can run!” While this claim was true, the march was large enough that if those who could run had, they may have been able to make it to the street in time to outmaneuver the police while the rest of the marched continued to walk into the space that had been taken. Nonetheless, the police with their bikes made it to the end of the alley just barely before those with banners did. Without hesitation the anti-fascists pushed against the line of cops with reinforced banners. The police pulled apart one banner (later identifying it as a weapon on their twitter) and unleashed a hail of pepper spray, forcing the anti-fascists to retreat and begin frantically treating people who had been pepper sprayed.

Less than a block later on 4th Ave, we met another line of police with bikes, this one much weaker and less filled in than the earlier ones. So, feeling emboldened by our previous attempt and their lack of numbers, we tried again to push through their lines. With banners and numbers lagging behind due to the chaos of the alleyway, the cops kept us back while receiving backup and signaling out a lone protestor who was attempting to walk past on the sidewalk. As expected, the Seattle Police Department did their best in beating this man nearly unconscious, as he was seen with his head rolling from side to side as he lay in handcuffs on his back. He was released without bail or charges the next morning. It is also worth noting that every time the cops attempted to grab the banners and steal them from us, we fought like hell to keep hold of them until the very end.

As the march proceeded West until turning South on 2nd Ave, the air filled with chants of “Kops and Klan, Hand in Hand!” and “How do you spell Nazi? S. P. D.!” When the march arrived at the intersection of 2nd Ave & Pine St, it became clear that the cops were only going to allow us to proceed away from Westlake, and if we proceeded any farther South we would end up in neighborhoods away from our desired location. A stand-off at this intersection began between the cops and the protesters, and minutes passed while the crowd amassed behind the front-line of shields staring down the cops. For a few minutes the crowd yelled at the police and sprayed silly string at the cops on the front line, completely covering their face shields at times. After people seemed to run out of silly string, the front of the crowd readied themselves and packed in behind the shields, donning goggles and masks. After a countdown, the crowd pushed forward and the cops responded with pepper spray, batons and flash-bang grenades. Despite the attempt to push through, the crowd was pushed back, as police threw blast-balls into the middle of the crowd. The next few minutes were chaotic, as medics helped people wash pepper spray out of their eyes and treat injuries from the cops’ sticks. 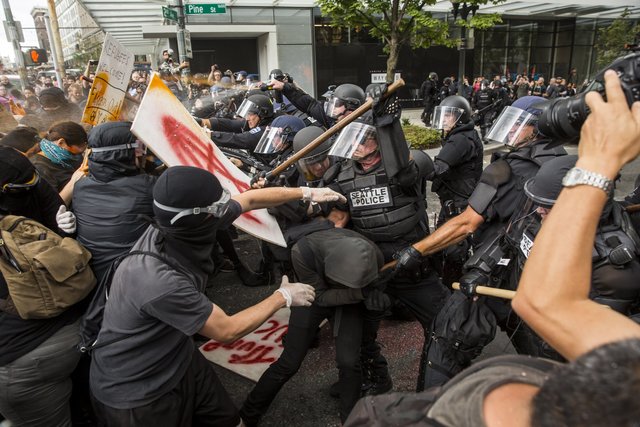 While a small group of people continued to yell at the police, it seemed clear that the march would not be allowed to move up Pine St. A few minutes later someone from a socialist party got on a megaphone and declared victory, announcing that the fascists had left Westlake Park and that we could now return to Denny Park to conclude the rally. This turned out to be a lie – Joey Gibson and his crew were in fact still in Westlake and word started going around that there was a small crowd of anti-fascist protestors there who needed support. As the march made it’s way back to Denny Park, an opening appeared on Westlake Ave where there were no cops barring passage to Westlake Park. The momentum of the socialists’ betrayal carried the march past this opening, and while some saw the opportunity, they were outnumbered by the cops well before the march could turn around. It became very clear that there were as many people who wanted to actually confront fascists, as there were those who were willing to call it a victory; a false one at that. 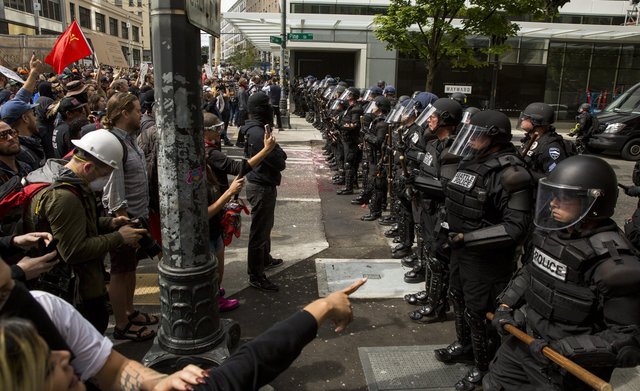 As the march returned to Denny Park, many people began to unmask and peel off in small crews to make their way into Westlake Park in a more discreet manner. We did not make it to Westlake in time to witness any confrontation with Joey Gibson and his cronies, and will leave it up to those who did to tell that story.

While it was disappointing that the march was unable to make it to Westlake, the energy of the crowd was inspiring. It has been rare in the past few years that even large marches have tried to actively push through police lines and we were excited to find ourselves surrounded by others who did not want to simply follow the orders of the police and march into a dead end. This march was also different from others in the past few years in that anarchists groups like the GDC attempted to organize with leftist and socialist groups. The outcome of this was complicated. While this allowed for a large crowd that was less controlled by a single group, the left did what they always do – lie to people in order to control them and keep people away from taking direct action. The leftist parties that steered the march back to Denny Park continually announced that “we could still claim a victory.” This begs the question of the definition of victory. It seems that in an attempt to save face, the socialists will go to any length to claim victory so as to stake some false claim to power in the streets. You can’t gain due-paying faithfuls through political failure. But it must be stressed that the socialists not only failed in their attempt to actively confront fascism, they mislead and lied to hundreds of people, many of whom saw through their politicking and were angry about it. We were inspired to see people pushing back not only against the police but also against the would-be managers of revolt. A lesson to be learned here, which has been learned before: socialists and leftists will always stab us in the back to gain political power. The best we can do in these moments is to look for the people screaming at the politicians and try to make new friends.