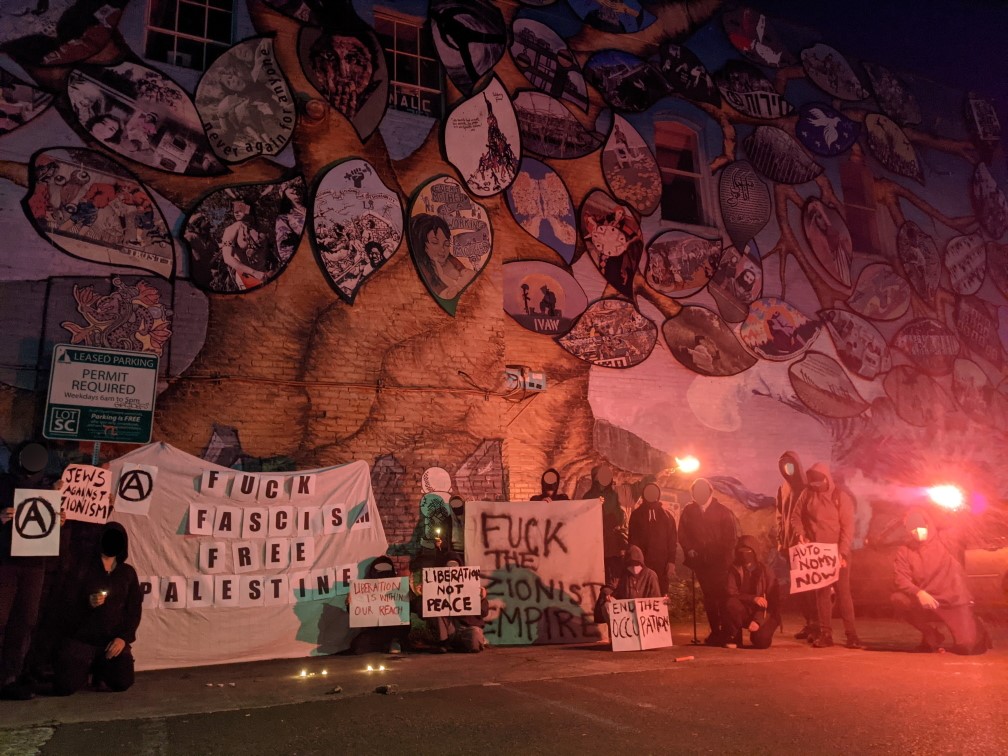 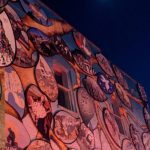 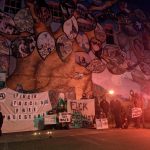 On May 18th 2021 Olympia anarchists and antifascists gathered on Squaxin land, in response to the ongoing Nakba, the horrors of the Israeli occupation on Palestinians, and the call from Palestine for international solidarity.

We know that Palestinians show up for international struggles, constantly. We know that all liberation is tied together, and that the Israeli fascist, racist, and extremist settler colonial state is enlivened by the same lack of humanity that the United States and every other imperial power and state is embodied by.

The recent attempted expansion of Israel into Palestinian neighborhood of Jerusalem Sheikh Jarrah, the murders and leveling of Palestinian homes, families, and infrastructures, the attempted silencing and genocide of Palestine– and the uprising of Palestinians and those worldwide against it all, brought us together with fires in our stomachs and hearts. We gathered at a massive and somehow nearly forgotten mural which in 2006 brought more than 200 groups together in solidarity with Palestine, and specifically the Palestinian city of Rafah, which has long suffered demolitions and murders. While we may not agree with every bit of this mural (we notice it calls for one-state, and we want total freedom)- we call on all those groups and people now to take action for Palestinian freedom and autonomy today.

We arrived with symbols of that light and fire. Candles for the ongoing mourning, for those who this world has lost due to Israeli imperialism and state violence. Flares for all those rising up, surviving, and fighting for liberation.

We commend and lift up also all those taking direct action worldwide to block Israeli trade, taking direct action to implement the long called for Boycott Divest and Sanctions. As actions such as Block The Boat in the Bay area have proven (in 2014 and again today), we have power to take those sanctions and prevent those channels of global trade from passing everywhere we are. We encourage a return to Israeli targets, with the outspoken rejection of the misconception that anti-Zionism is anti-Semetic. As anarchist and anti-Zionist Jews, we abhor erasure by Israel of our autonomous and stateless cultural identity, and the attempted replacement of that with a genocidal imperial state.

In solidarity with Palestine and those fighting imperialism, fascism, and state violence around the world, we send our love and we say with you: Liberation is within our reach.