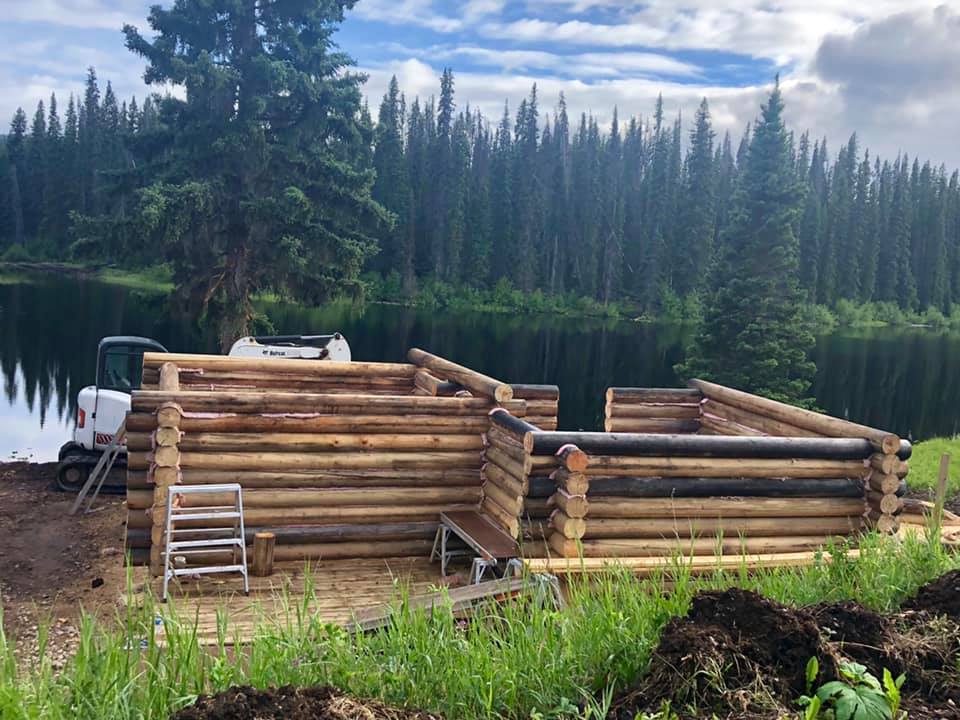 Do you want to do your part to defend Mother Earth from the ravages of the oil and gas industry? Do you want to support the indigenous people who have been on the front lines of the fight against pipelines for the past decade? Do you want to learn about decolonization, the sovereignty
movement, and the campaign to prevent the Coastal GasLink (CGL) pipeline from being built?

If so, you are invited to the first ever Sovereign Likhts’amisyu Action Camp. From October 1-11th, 2019, the Likhts’amisyu Clan of the Wet’suwet’en Nation will be hosting its first-ever action camp on traditional territory recently reclaimed from the Canadian state.

Following the RCMP invasion of Wet’suwet’en territory (hyperlink) this past January, the Likhts’amisyu Clan of the Wet’suwet’en Nation re-occupied one of their traditional territories in so-called Northern B.C. Since May, we have been hard at work building a new village. We are now requesting that volunteers come to make a major push to get everything done before the snow flies.

If this is the first you are hearing about the Sovereign Likhts’amisyu, please visit our website at www.likhtsamisyu.com.

Who are the Likhts’amisyu? What is this all about? 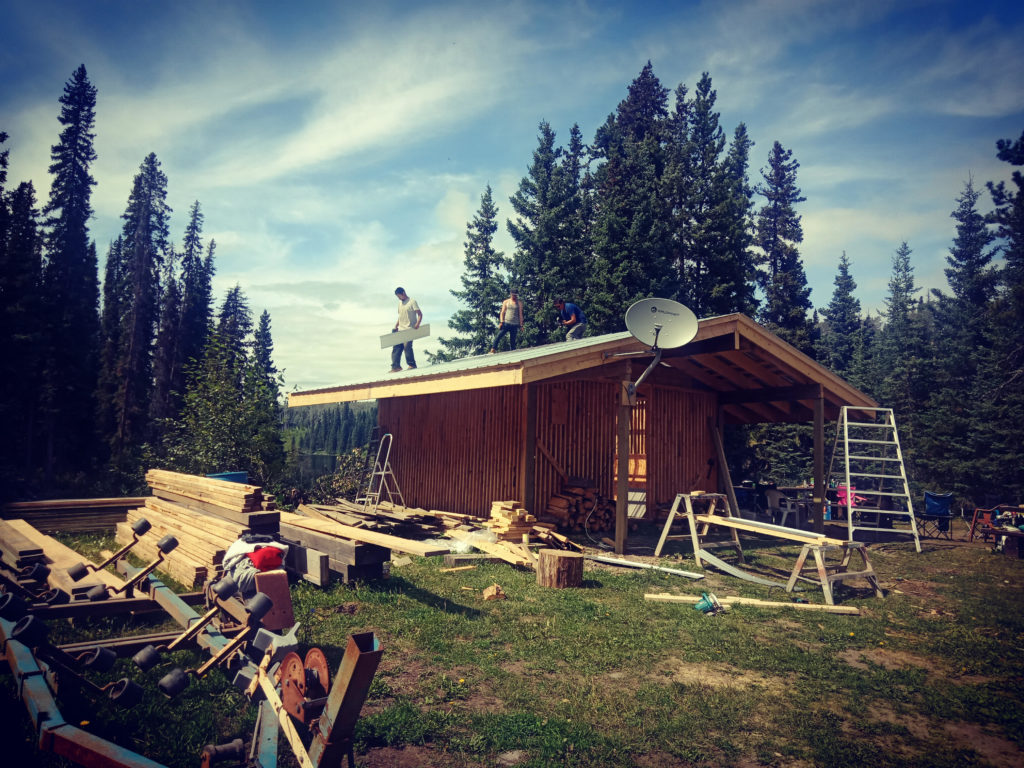 The Likhts’amisyu is one of the five clans of the Wet’suwet’en Nation. For the last ten years, the Wet’suwet’en have been resisting an array of pipelines through which industry intends to ship diluted bitumen and fracked gas to the Northwest Coast for export. The focal point of these efforts have been the Unist’ot’en Camp, a long-standing territorial re-occupation which was built directly in the path of the proposed pipeline corridor. Years of resistance have caused multiple
multi-billion-dollar projects to be delayed and/or cancelled. Things
came to a head this winter, when the Coastal GasLink pipeline corporation obtained a court injunction against the camp. In response, a blockade was established on a neighbouring territory by members of another Wet’suwet’en clan, the Gidimt’en.

It is important that people realize that this fight is far from over. Although preliminary work has begun on the pipeline, as well as on an LNG export terminal in the coastal city of Kitimat, no pipe has yet been laid. The events of December and January should be regarded as one phase
in a struggle that has been going on for a decade.

Seen in this light, the Likhts’amisyu village represents a continuation and an expansion of the Wet’suwet’en people’s efforts to assert their rights as a sovreign nation. Whereas at the beginning of December, there was one camp resisting ongoing colonialism on Wet’suwet’en territory,
there are now three – the Unist’ot’en, the Gidimt’en, and the Likhts’amisyu. The three clans stand in solidarity with one another, as shown ceremonially in a recent Unification Rally (link). We encourage people who come to our action camp to also visit the other camps.

In the wake of the events of the winter, the Likhts’amisyu decided that the time was right to assert their sovereignty, and in May of this year, they began the process of building a new village on an ancient Wet’suwet’en village site. They received a donation of a significant number of logs to use for building. As things currently stand, two log cabins have been built (both of which await the addition of a roof) and a third is well underway. The plan is to have all three cabins fully
built, furnished, and move-in ready before the snow comes this Fall. In addition to this, a Summer kitchen has been built.

It will also be necessary to build several wood sheds and cut enough firewood to last the winter, so several days will be spent meeting this need. 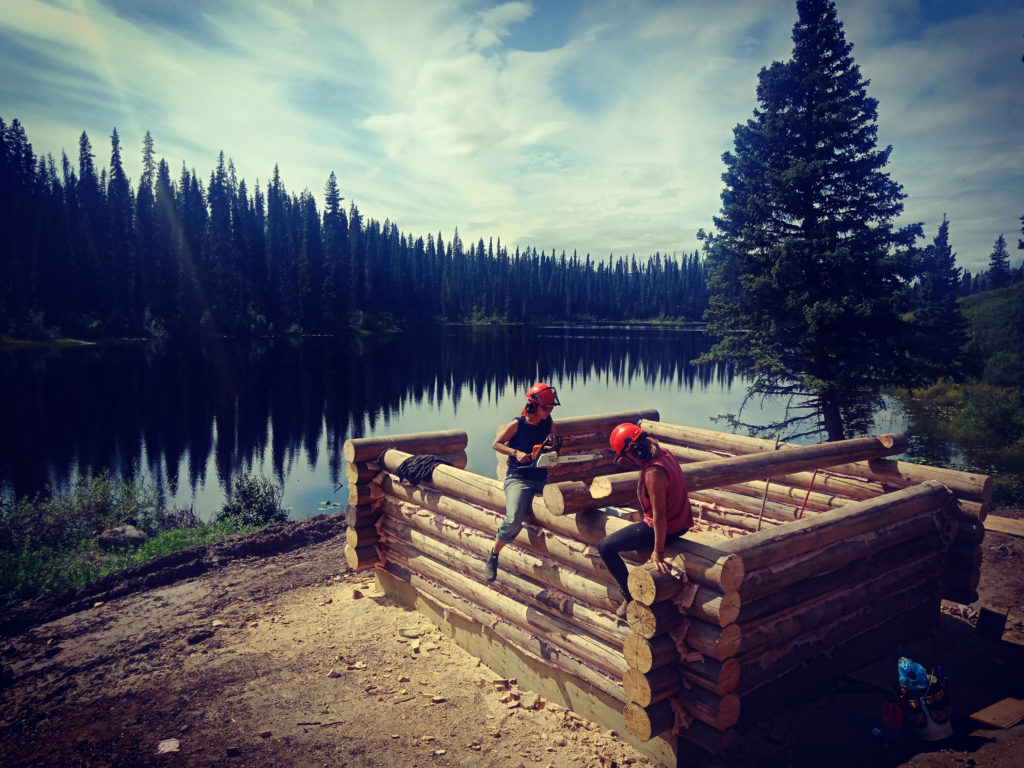 We encourage all people who are inspired by this project to come participate. Don’t be shy to come if you don’t have experience working construction. We will find a way for you to contribute. This is a great place to pick up some new skills.

Although we are requesting that volunteers come ready to work, this isn’t just a work camp. We are hoping that activists who are serious about land defence and indigenous solidarity will see this as an opportunity to build and strengthen relationships, to share information, and to strategize about how best to wage a multi-faceted, multi-year campaign combining different approaches and sites of struggle. With ecological struggle set to intensify in the near future, it is important that the people on the front lines are connected to the support of a wider movement. Working together, as well as spending time around the fire, is a great way to build relationships rooted in mutual respect and trust. We believe that such strong-bond relationships are the stuff that resilient movements are made of.

There will also be other activities, such as tracking, hunting, fishing, foraging, berry-picking, paddle-boarding, kayaking, hiking, music, workshops, story-telling, strategy discussions, and various kinds of skill-sharing. We will be inviting land defenders and knowledge-keepers
from neighbouring nations to speak about the issues affecting their territories as well, as well share stories. If you would like to lead an activity, please email us with your idea.

We are also specifically reaching out to academics, researchers, scientists, and university faculty, inviting them to visit the camp during this time of heightened activity. We are doing this because we have plans to build a climate change research centre here. We want to connect with people working in the fields of biological, environmental science, anthropology, and archaeology.

Likhts’amisyu chief Dtsa’Hayl (a.k.a. Adam Gagnon), who is a professional contractor, has been leading the construction efforts at the village site.

We understand that many people who might like to come do not own their own vehicles. If you are interested in coming, please email us telling us where you are located and we will do our best to find you a ride. Alternatively, you could post on the Facebook page and request a ride
there.

Lastly, for people who do want to come, but who can’t come for the action camp, we encourage you to visit when you can. This is a multi-year project in an early phase. In the long run, we want to build up a strong network of people willing to support us on an ongoing basis.

Please share this invitation throughout your networks, and please do not hesitate to write us at [email protected] (for the chiefs directly) or [email protected] if you have any questions. If you leave a number, we will a call to answer any questions you have, as we realize
that the dates of the camp are rapidly approaching and time is of the essence.

Here are some useful links:

1. The Go Fund Me page is at:
https://www.gofundme.com/manage/likhtsamisyu2019

2. The promotional video is at:

We encourage folks who are traveling long distances to come to
Wet’suwet’en territory to also visit and support the other camps. The
Unist’ot’en Camp has also recently put out a call for volunteers for an
upcoming construction camp. Details can be found here:

From their call for volunteers:

“During the last week of October and early November there will be a
concerted push to complete the Healing Lodge. This beautiful and
functional building has become the key embodiment of the Wet’suwt’en
fight for sovereignty and against industrial destruction. The Healing
Lodge is about 95% complete – it would be a great achievement to be able
to declare this project finished this fall. Over the last several months
good progress has also been made on other Village structures including a
root cellar, tool shed and green house. These projects also require some
additional work.”

We have just learned that the Gidimt’en Camp has also just announced
dates for an Fall Work Camp. For details, see:

“The cold is quickly approaching at the Gidimt’en Checkpoint and Costal
Gaslink is preparing for construction activities in Gidimt’en
territories this fall and winter – including the construction of another
man camp and clearing the right of way on Gidimt’en yintah. We are
preparing for the cold, hard battle ahead – and we invite you to join
us.

In an era of attempted pipeline development across co-called “North
America” the capitalist and colonial processes which displace Indigenous
peoples from their land destroy the planet must be stopped! Working
alongside the Gidimt’en checkpoint is concrete way to support resistance
to the state along with colonial and capitalist projects which are
destroying our territories and the planet more broadly.

Folks with carpentry, framing, logging, cooking and camping skills are
encouraged to come to camp and work, ideally folks commit to ten days of
work beginning October 10th, 2019. However supporters are needed before
and after camp.”