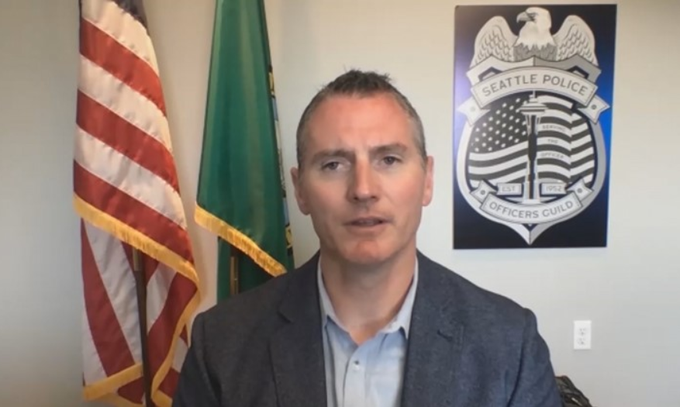 Editor’s note: the admins of Puget Sound Anarchists do not advocate for the reformism of defunding the police, but rather the destruction of the institution of policing, incarceration and capitalism that uplifts these punitive arms of the state. We do however find it important to highlight the ways in which SPD & SPOG are stealing thousands of dollars from the city.

A closer look at time theft

In 2017, SPD officer Mike Stankiewicz was charged with felony theft after it was discovered he missed 55 days of work for which he was paid $25k. He eventually plead guilty and resigned before he could be terminated.

Though he got caught, Stankiewicz was able to shirk duty for an absurd amount of time, raising questions about how many more cases like this go unnoticed.

So we examined several OPA files dealing with this issue to see how time theft is detected & punished—or isn’t.

Like most workplaces, the SPD is a panopticon of employee surveillance, with cameras, entrance cards as well as electronically tracked vehicles. Seems like it should be hard to get one over, right?

Officers fill out their own electronic time-sheets, which are then reviewed by a supervisor. They’re required to certify that it’s true and correct. This creates room for exploitation, especially among sergeants who have a degree of autonomy.

Supervisors may overlook minor issues here or there or they don’t notice them at all.

In one case, the OPA director notes a discrepancy would never have come to light if the employee’s supervisor hadn’t personally witnessed him showing up 3 hours late.

That same employee had been written up for “anomalies” in his time-sheet—with a finding of “not sustained (Training referral)—and was placed on a “performance management agreement” before he was finally caught red-handed.

Catching time theft is hard and punishing it is even harder—thanks in no small part to the terms of the SPOG contract, which requires an elevated level of proof for infractions that might be “stigmatizing” to an officer. Other SPD officers have stolen time every bit as brazenly as Stankiewicz—though maybe not quite on the same scale—and they’re still on the force.

In 2017 OPA found that Sgt. Joe Lam was paid for 9 days ( 81 hrs) that he did not work. Lam used the same method as Stankiewicz. Precinct records showed him on vacation but he logged regular pay in his timesheet so it didn’t use up his vacation time. The OPA director wrote that this showed “planning and intentionality.”

At his rate of pay at the time, 81 hours adds up to well over $4,000. According to Washington State Law, theft between $750-5000 is a Class C Felony. Lam was suspended 4 days and forced to forfeit his leave balance.

OPA Director Andrew Myerberg wrote that the preponderance of evidence showed Lam had broken state and municipal laws regarding theft, but there wasn’t “clear and convincing” evidence that he had violated SPD policy on dishonesty. This is a theme we see over & over again. The OPA sustains the lower timekeeping policy violations, but it stops short of a dishonesty finding due to the clause in the SPOG contract requiring an “elevated standard of proof.”

This is rare among police agencies.

In another case, an officer tried to claim overtime & court pay for a personal civil case unrelated to his work. When his supervisor called him out on it, the officer told him to forget about it. He became “agitated” & tried to snatch the file from the supervisor’s hand. According to OPA, the officer tried to claim he was “confused” because he thought the civil case was related to a police matter, but the subpoena was mailed to his home address, not the precinct. And had already given testimony as a private citizen not as an officer

Myerberg wrote that “there is not a doubt” in his mind that the overtime slip the officer submitted was neither “truthful nor complete.” Though the officer sought compensation he knew he was not entitled to, the dishonesty complaint was still not sustained.

Another OPA case found that an officer claimed military leave for 6 days & didn’t show up for military duty. It totaled 54 hours, which is nearly $2,000. Again, this is felony theft. OPA referred it to the King County prosecutor & City Attorney, both of which declined to charge him. The officer admitted to at least 13.5 hours for which he was inappropriately paid, so he was ordered to forfeit that amount in leave.

That means that in the end he still got away with taking home a full week’s worth of unearned pay—or around $1,460. In these cases, there were allegations about specific cases of time theft with dates, but a lot of these are harder to verify because they’re general complaints — “so and so is cheating on his time-sheet”— brought anonymously by other officers with beefs.

An officer was accused of bilking the overtime system over a period of 10 years. OPA took a sample from 3 months, & found 31 hours worth of “anomalies,” but a guild representative offered an explanation that OPA found to be plausible. Lacking the resources to investigate, OPA ruled it “unfounded”. The fact that some cops are getting creative with their timekeeping is especially alarming given that last year, several police took home more than $100,000 in overtime.

No. 4 on this list is Sgt. Eric Zerr, who heads the Navigation Team responsible for sweeping homeless encampments. When he was investigated on an unrelated policy violation in 2015, Zerr was found to have falsified his timesheet by 45 minutes. A small number but it can add up. As we previously noted, the SPOG contract has a number of overtime provisions that are ripe for abuse, including a 3-hour minimum for court pay & overtime pay paid at time and a half for off-duty calls over 8 minutes.

We’re constantly being told that money is tight over at SPD & that there will be dire consequences if we cut a single penny from the budget. Reigning in spending starts with the guild. SPOG not only guarantees cops stay overpaid—it ensures they can skim extra with impunity.

We’re constantly being that money is tight over at SPD & that there will be dire consequences if we cut a single penny from the budget. Reining in spending starts w/ the guild.

SPOG not only guarantees cops stay overpaid—it ensures they can skim extra with impunity. (24