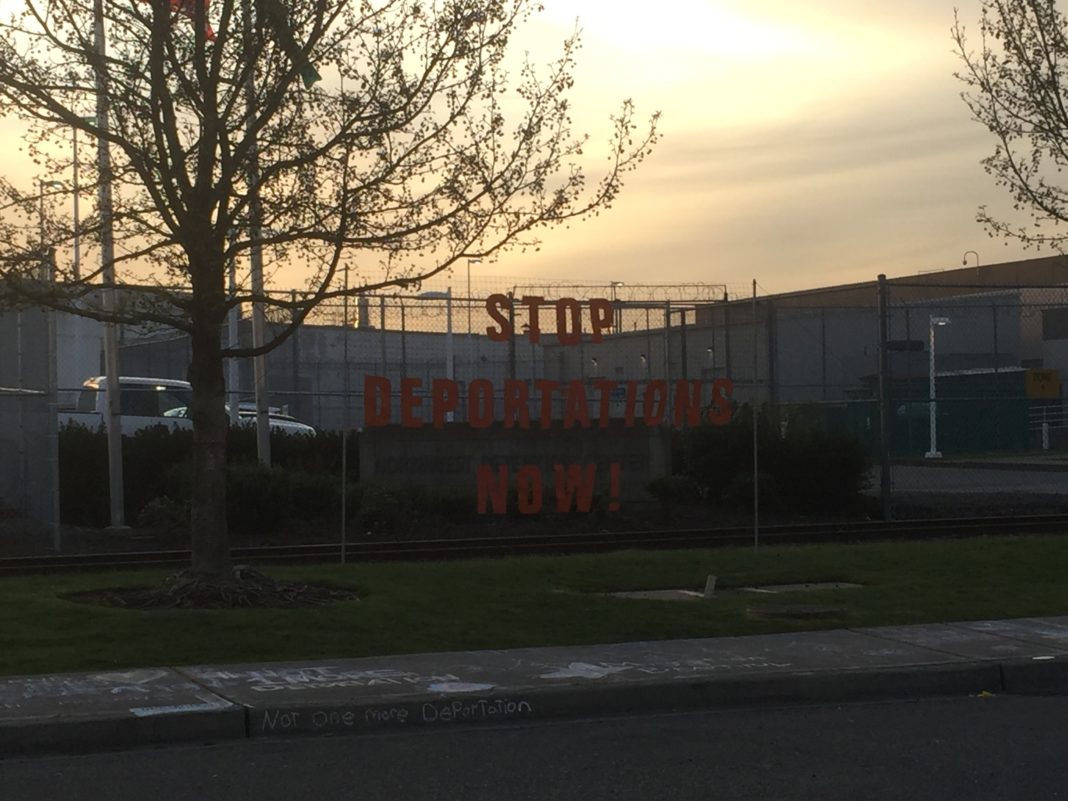 On Sunday, April 23, women detained at the Northwest Detention Center (NWDC) ended their hunger strike to call attention to worsening nutrition and sanitation conditions. Their unmet demands included properly cleaned laundry, adequate medical care, reasonable commissary prices, raising the $1 per day prison wage, more nutritional cafeteria food, and contact visits “so parents can hug their children.”  GEO Group representatives promised to improve food to meet basic nutritional standards after the first week on strike. Instead, the food has gotten worse and GEO has retaliated against hunger strikers. They believe that GEO and ICE retaliated against hunger strikers by transferring at least four hunger strikers to NORCOR corrections facility in Oregon.

They announced that 40 men will go on hunger strike today, calling on GEO and ICE keep their promises. The abysmal conditions point to the ongoing danger the NWDC to the public health, safety and welfare of the individuals involved, as well as the community as a whole. The NWDC, which is located on a Superfund site, is the largest immigrant detention center on the West Coast, caging over 1,500 immigrants while awaiting civil deportation proceedings. Immigration and Customs Enforcement (ICE) contracts with The GEO Group, a multinational private prison corporation, to run the facility. GEO Group also runs the monopoly commissary store, which detainees are boycotting, calling on GEO to use its exclusive sale rights at reasonable prices. Hunger strikes have aimed their demands at the federal government and the private contractor, and are now reaching out to Tacoma City authorities.

The Trump administration has staffed the ICE deportation force with openly anti-immigrant officials with links to white supremacist organizations, leaving people detained with little choice but to put their bodies on the line to fight for their basic dignity. At the same time, local governments like the City of Tacoma have the ability to choose their own destiny. City government has the power to change municipal codes to ensure that for-profit detention facilities cannot expand into heavy industrial zones that pose environmental hazards, and that existing facilities comply with environmental and public health requests for monitoring and remediation. All people have a basic human right to health.

The most recent hunger strikes, part of a history of hunger strikes and activism that dates back years, signals that the NWDC does not meet city, county and state regulations for health and safety. This alone is enough for Tacoma’s Finance Director to revoke GEO Group’s business license to operate the NWDC.

Supporters have announced a rally before City Council’s public hearing on “Correctional Facilities Interim Regulations.” NWDCR organizers will also submit petitions with over 500 signatures and over 20 community group co-signatures to City Council calling on them to act to protect community health and safety.

I am writing this statement to let people know my personal opinion about the statement that the president of GEO made. He wrote it only to defend the economic interests of his company and employees. He does not mention the profits that he is making through the daily payment that he is receiving from the Federal Government for each one of us for every day that we spend here.

Although we do not know the exact amount we know that it is enough to provide us with better food, medical care, and higher pay for the work that the detainees do within the facility. The newly arrived detainees receive used clothes that in most cases causes itching and rashes on the skin.

I want to also mention that the prices at the commissary are very high and because the food we receive is of very poor quality most of us have to buy food from the commissary.  We know that this is also a source of income for them because they take a percentage from all the sales.

They also mention that we have enough space but in reality we are only allowed to be out in the yard for an hour. This is worse that when we were in prison, because there we were allowed to be out in the yard all day long, we had a gym, educational programs, and activities that kept us busy and with less stress. Here when people have a health issue, they go to see the doctor and most of the time they just give us Naproxen or Ibuprofen and recommend that we drink a lot of water.

We have family visits through a small window. If they have the space and personnel, at the very least we would have the opportunity to have contact visits.

Also most of the jobs, that is, all kinds of work, including kitchen, cleaning, laundry, etcetera is done by the detainees.And on some occasions, I mean whenever the facility needs painting, polishing,and the floors cleaned they ask us in the units whether someone wants to do the work. The people that agree to do the work spend one or two nights doing the work and they only receive one cup of soup and a bag of chips.

If this is called humane treatment, well I am sorry because I call this inhumane treatment and protecting their own economic interests. Because they know that if the facility is closed they will no longer have their little gold mine. And all because they don’t want to spend a little more money of the percentage that they receive from the budget the Government grants to them, which incidentally is more than enough to give us better service and human treatment.

The GEO Group claims that they comply with the needs of the residents that are in non-penal custody and in the care of the immigration federal authorities.

Our response to this is that if we are not in a criminal process why is the first thing they do when people set foot in detention is to classify us as they do in a prison.  The people that are transferred from prison are put in the highest level, that is level #3, and their uniforms are red. These detainees can’t work outside of their unit or take part in other activities. They are discriminated against and segregated from the rest of the detainees. The level 2 and 1 detainees can work in the kitchen, the laundry, and in general cleaning.

And yes, this place is inspected each month, but when there is an inspection they grab a group to wax the floors and paint the walls, a job that would cost them a lot of money. The people who do the work are only given a Top Ramen soup and a bag of chips. The workers labor for eight hours and one get one dollar for this. This could be called modern day slavery.

It doesn’t matter how serious the problem is, the only thing they prescribe is that you drink a lot of water and that you stretch, or they give you naproxen pills for everything. And when the doctor comes to the appointment, his response to everything is that they can’t help you because there isn’t enough money in the budget, and they can’t help you unless you are on the verge of death. So if you have cancer and you still have five months to live they don’t help you because they don’t know if you are going to be leaving here.

They just transfer people around to collect more money from the taxpayers.

You have a population here of 1500 detainees and they don’t have enough staff to care for all of them. There are some officers here that work up to 12 hours a day, and they are falling asleep at their desks.

When someone gets in a fight they don’t pay attention and there are many fights that happen without them noticing.

And although the immigration officers are here, the officers just do their walk-by every Wednesday just to be able to say that they came by, but when we need help they don’t help, they just tell us to write a kite but they never answer our questions.

And court dates are delayed for over 4 months. Sometimes the judges give us false hopes just to deport us at the end after we have fought our cases for years.

Our families work hard to earn money and most of them are here legally and follow the rules of the United States, and the laws of this country.

And those that are here illegally pay taxes but can’t receive anything in return.

They say that this place is competent but they can’t even control the detainee who is making their life impossible, they don’t say anything to him, they just call him outspoken.

Once more they say that they don’t want to separate families of detainees, but visits are one hour long from across a piece of glass and those that are from out of state can’t see their families because Video visits are only available in pods F1 and F2. Where is the right to equal treatment?

We ask them to put a video unit in our pod but they say that it won’t benefit them because not everyone will use the video visit.

The food has gotten worse. Smaller portions but the same food.

So how can this be competent detention?

Everything I say here is the truth.