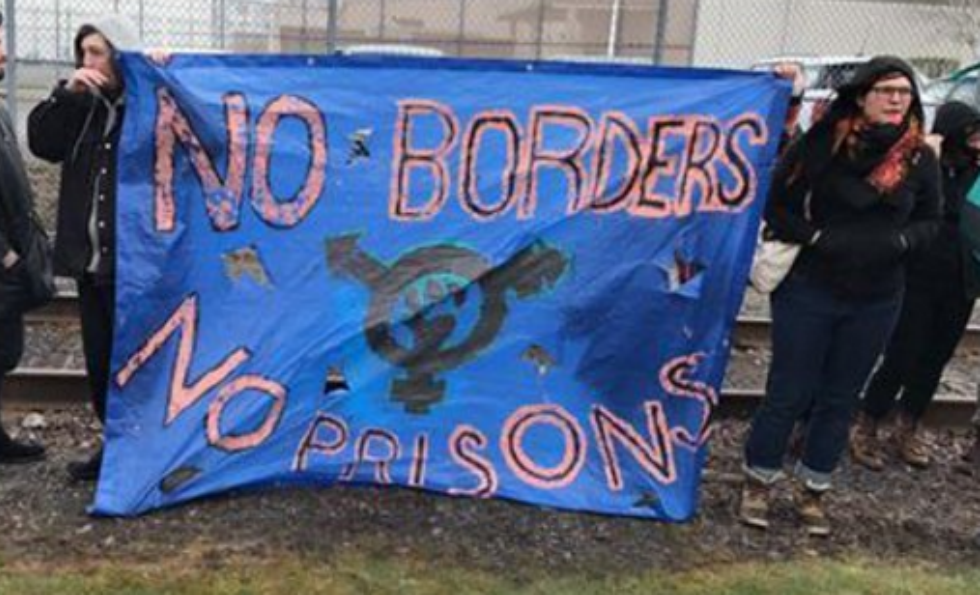 A hunger strike that has began inside an immigrant detention facility in Tacoma, Washington, has now spread to 9 pods and now includes hundreds of prisoners. According to NorthWest Detention Center Resistance, the strike now includes over 415 people and has grown from around 115 people over the course of several hours. People on the outside of the facility demonstrated in solidarity, held banners, and at night, set up an encampment.

Statement from people in detention
“hi maru we know you r out side for us ,so thank you for that ,and i just… https://t.co/osHBUnZBUv

According to a post on Facebook, people on the inside issued the following message of solidarity to those on the outside:

hi…we know you r out side for us ,so thank you for that ,and i just want it to let you know we r with you we are on unit F 2 and everybody here we not going to eat the food they giving us for the next 3 days ,,,thank you…

B: So we’re outside the Northwest Detention Center and we’re talking to a family, somebody that wants to get their message out.

A: Hold on, let me put you on speaker phone.

Christian: Ok, my name is Christian. I am from Tacoma, Washington. I ask on behalf of everyone, not just myself. I ask that you do something for the Hispanic people that are here inside. The food they serve, they serve beans and rice seven days a week, three times a day. I am leaving already, I do this for my people and for the people that are still going to be here, be they dark skinned, light skinned or Hispanic be they what they may. There is no other way for us, we are here supporting each other to give food to other people because we are doing a strike, that’s what we’re doing. The other thing we are doing is asking for the Mexican consulate, and whichever consulate to help us, to help the people. There aren’t any clothes, to shower or whatever. We ask that you do something because of this. There are rules where they don’t permit us, here they don’t let us speak with the consulate. I ask that you do something for each person here.

They give us to eat, in the morning they give us food that is worse than in prison. Commissary is very expensive and my family always gives us a little bit of money and sometimes my family spends hundreds of dollars. Many people tell me that it’s really expensive. It’s too costly, man. We ask that you do something for us.

NWDCR: Hello Christian, how are you all doing?

Christian: Good, good, we’re here see, I hope that you’ve heard what I’ve been saying. I do it for our people, we need more people.

NWDCR: Yes, we are recording and we will send it to the people that are outside through the Northwest Detention Center Resistance network. We are here to let you know that you are not alone and there are people willing to stay overnight the time that you are engaged in struggle on the inside. We understand that many times you may not think that the people are thinking of you but we are here to say that yes, there are many people, thousands of people that have taken notice of what is happening right now.

Christian: That’s why I’m saying that I’m still here, man, they haven’t taken me yet, I’m scheduled to leave tomorrow but all my people are fighting for this and because of that I fight harder. Today they are starting a hunger strike for three days. I hope that the people outside can support all the people on the inside.

NWDCR: I hope that you don’t lose hope. Right now in Mexico, in Honduras and Guatemala deported people are organizing themselves into networks of comrades who have been deported. That is to say that in other geographies as well the people are also organizing themselves. And beyond that, with this class action lawsuit that was filed in Denver against GEO Group Inc for making people work for a dollar a day, they have announced that people like you can join that class action lawsuit if you have worked for a dollar a day.

Christain: Look, another thing man, I was in court for two, three days. I was in court, my wife was there, ask her how the judge had her removed. My family went to court to support me, voluntarily, he denied my petition, and placed me in deportation. Please listen to what we have to say, I am here with my raza, with my people, whatever may come. That’s what I tell my wife. They on the outside, my family is suffering. Here they treat us worse than a prison, and it’s supposed to be just detention for immigration, but it’s a prison, man. It’s worse than a jail. I ask, are we in jail or in detention? Look, even for the telephone I was at Norcor, Oregon, that’s what the town is called where there’s a detention center. I wasted, there in two months I wasted more than three hundred dollars on the phone, it was expensive.

Christain: Thanks, thank you so much on behalf of all my people here and to all the people that are on the outside, to keep on struggling because we have to continue the struggle. I’m on the way out but I leave my word and my voice for my people.

NWDCR: Yes, may your family be safe and may you be reunited soon, we hope that it is so.

B: Thank you, you are not alone!

The Tacoma Detention facility has been the site of ongoing demonstrations against it and numerous campaigns by a variety of groups, including anarchists. It is run by Geo-Group, which operates detention facilities and prisons across the US. In recent months, immigrants who have been detained after being caught up in ICE raids, have launched a class action lawsuit, stating that they were forced into literally slavery after they were forced to work without pay while incarcerated.