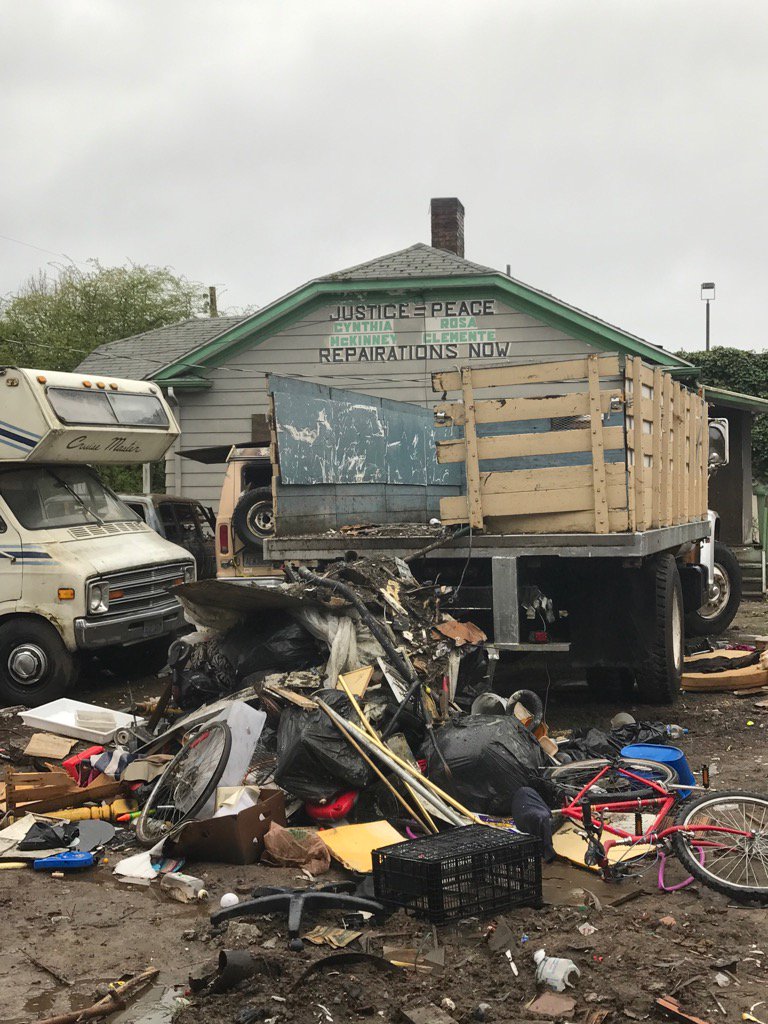 Today April 19th 2017, the group holding space at 23rd and UNION supporting Displacement Stops Here are currently under threat of violence from the Seattle Police Department, who is in the process of raiding our base at the 23rd and Union UPC Project. Folks holding space here did so by and for protection of a space central to the community here in the central district. Our mission at this location was to fight displacement and erasure of the black community. We are committed to this fight, even in the face of hostility. We promoted peace by building relationships with the community and organizations from the community and by providing a space where blackness and healing were centered. The rallies that were thrown in conjunction with folks and organizations were peaceful and welcoming even in the face of violence from people who had agendas that meant the destruction of black communities.

Seattle Police made themselves known by attempting to force their way in through a side-door without notice. Failing their initial entry, they regrouped at the front door and would not answer questions related to their attempted forced entry, and further questions escalated their response to a state where it was clear that they would use whatever force necessary to remove peaceful space holders. They came with no paperwork or notice to vacate the premises, and refused to review any evidence of tenancy or permission. They would not give us information about how to get additional belongings from the space. Property owners who were present during the raid refused to communicate about the personal belongings of the space holders. We have officially been locked out of the space that we have been holding for more than 4 weeks. Any accountability was completely disregarded. We are currently mobilizing press to cover the raid and are asking that anyone who is able come down to 23rd and Union to support the movement.

Holding space in this location is strategic and historical. In 1986, resistance from activists in the community led to the creation of Northwest African American Museum. The Midtown Center, located on the corner of 23rd and Union, is the largest square block that has not been developed in the Central District (and, arguably, all of greater Seattle).This makes it a prime target for gentrification and development. Umojafest Peace Center, founded by Omari Garrett and other members of the community, has been a place of community gathering, refuge and resistance against forces of colonization, displacement and racism for Seattle’s Black community. This space and other Black-centered spaces in the area MUST be protected.

Follow Displacement Stops Here for more info and updates of today’s rally at Midtown Center at 23rd and Union.