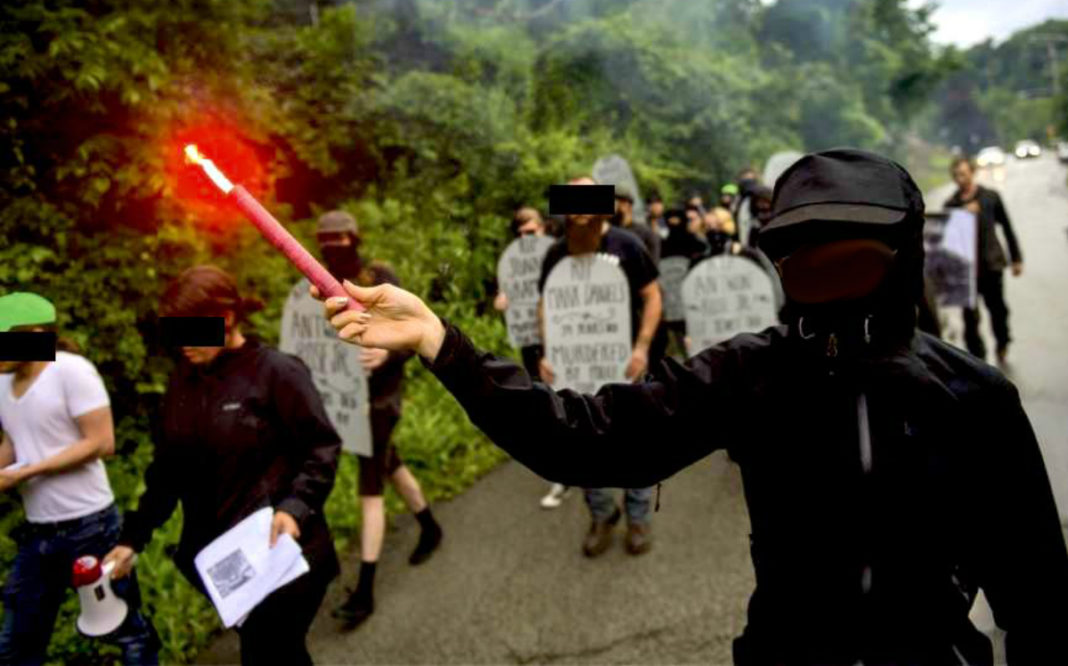 State Attacks on #OccupyICE Continue as Police Push Towards Raids

In the last few days, both Democrats and pundits have increased calls for “civility” against the boogeyman of “left-wing violence,” amidst both the mass doxxing of ICE employees, the growth of #OccupyICE, and the tame protesting, booing, and name calling of public officials in public places. While the bootlickers on the Right use the “spirit of 76′” as a window dressing for their future fascist visions, it seems none of them want a return to bread riots, destruction of property, and tar and feathering of government officials that marked the lead up to the first American revolution.

“Use your words,” we are told, by the same ruling class that would mobilize the full force of the State against anyone that challenges the dominant order.

This policing by the Center is designed to have two effects: first, to get more moderate elements in social movements to police the more insurgent and combative ones. And two, to prepare and normalize the very real repression that is coming. Already, various #OccupyICE camps have been attacked, but a full scale eviction, especially of the flagship encampment in Portland, has not been attempted – yet.

Much like with Occupy in 2011 however, the police have started to play up fears in the media of “reports” and “calls” from the public about the encampments, in an attempt to drive a wedge between the surrounding community and the occupations, as well as build support for a coming raid – which will be violent, costly, and also risks bringing out more people who support the encampment into the streets and thus into the struggle. This is why we need to call out the bullshit from both the Center and the police, now. This is counter-insurgency, not civility.

And the police are also afraid, as they know that this weekend mass rallies are being called for by progressive and non-profit groups, and they are scrambling to break away the direct action oriented segments of the movement before they get a chance to grow.

In the face of this, now is the time to prepare for these raids, but moreover, prepare for how people will respond to the violence of the State and it’s police, once the hammer does come down.

In Portland, despite threats of arrest and recent attacks by DHS agents, as well as low level attempts to recapture the ICE building from protesters, such as taking down a “Refugees Welcome” flag, the encampment in Portland remains.

On Twitter, Portland communards report that DHS agents even went so far as to put up a cardboard cutout of Hulk Hogan in the window with an ICE agent suit on, in an attempt to intimidate demonstrators. Despite this, people remain in high spirits and the occupation continues forward, keeps on growing, and people report that recently wooden roofs have been added to various structures.

In Tacoma, last night around 10 people were arrested by Tacoma police before a nightly noise demonstration was to take place. Despite the arrest, the noise demonstration still took place and the encampment continues. Today however, it was released that police were giving occupiers 24 hours (or until 6pm on June 28th) to leave the area or face arrest. For more updates, check @Occupy_NWDC on Twitter.

In Los Angeles, religious groups carried out civil disobedience at a federal courthouse against child separation ahead of an appearance by Jeff Sessions on Tuesday. 25 people were arrested. Meanwhile, Occupy ICE LA continues to camp out in front of entrances of the ICE building. Supplies and bodies are still needed. Check @LAAgainstICE for more info.

“Yesterday (the 25th), we shut down the ICE office with 40 people. Our camp was dismantled; our spirits were not. Today, our camp was rebuilt and the movement continues. Join us tomorrow!”

Currently the occupation continues, but more people are needed on the scene.

Lastly, in New York, the #OccupyICE encampment has moved to a new park in Foley Square, but police are now giving it until midnight to vacate the area. The Metropolitan Anarchist Coordinating Council put out a statement on their decision to pull out of the original occupation, due to ICE sneakily denying bail hearings due to the protests, essentially pitting protesters against migrants.

In other anti-ICE news, in Washington DC, people protested outside of ICE HQ. In Richmond, California, anti-ICE demonstrations took place in front of a detention facility. In Tornillo, Texas, people also blockaded the entrance to a detention site, the largest child detention camp in the United States.

Also, this weekend will see massive anti-ICE demonstrations in a variety of cities organized by different Left and non-profit groups. This would be a good time for people to hit the streets and encourage people to get involved in the occupations, hold a bucket out for donations for the encampments themselves, and also carry out new waves of actions with more people on the streets. We also want to remind people that if they are looking for full color, easy to read, and high quality anti-border materials such as posters and stickers, please check out CrimethInc., which has both and more.

More about recent protests, complete with pictures, can be found at the original post by It’s Going Down.