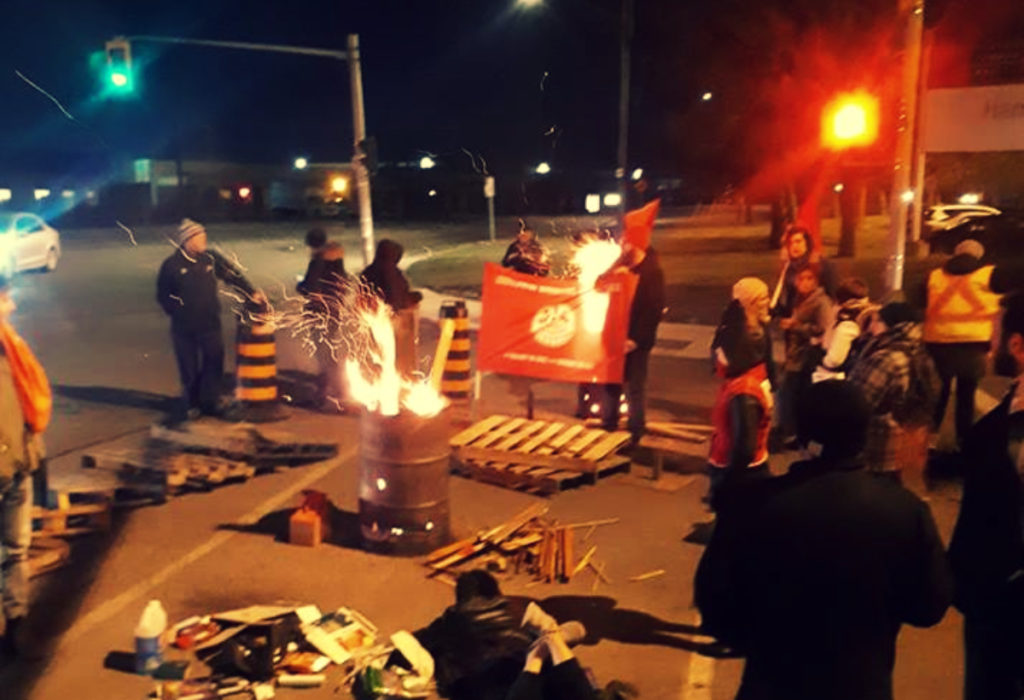 Today we are joined with some very special guests. The first are several comrades from Olympia, Washington, who are part of the group, the Olympia Solidarity Network. A solidarity network is a group of people that come together to organize and mobilize in a given community against bosses, landlords, and beyond. They often engage in fights over lost or stolen wages, unfair firings, stolen deposits, and lock out evictions. Unlike tenant and legal clinics however, solidarity networks use direct action to apply pressure. In Seattle, Washington, which has one of the oldest and best known solidarity networks, literally thousands of people have participated in actions under its banner, carried out delivery of demands to landlords and bosses, and have also benefited from these collective campaigns by getting stolen wages and deposits back, stopping evictions, and fighting back directly at their workplaces.

On today’s episode, we talk with members of Olympia Solidarity Network who discuss their recent campaign against various businesses in the downtown area of the city who were fighting to secure a contract with a private security company which aimed to clear out the houseless community from the downtown area. After a heated and lengthy campaign, the contact was finally defeated. Our interview talks about that struggle and how the group saw things through to the end, as well as the push back that they faced from the police and the downtown business class.

Next up, we speak with two comrades from so-called Halifax who talk about the recent Postal Strike and how members of the IWW and others have supported the pickets. Currently, the State has forced all postal workers to return to work or face massive fines, but members of the IWW and others have kept up pickets in the streets. Several IWW members in Halifax were also recently arrested for taking part in the pickets, and can be supported here.

But first, let’s get to the news.

However, true justice will only come with the defeat of fascism & all the things that make us unfree.

Keep fighting..
For Freedom.
For Heather.
For each other.#SmashFascism

American Front member Cory Colwell of the Eugene, Oregon area was arrested last night in Washington for attacking a Black DJ at a Lynwood bar. Dozens of neo-Nazis are in WA today to mourn Robert Mathews, leader of The Order, who was executed by pigs today in 1984. @WANaziWatch pic.twitter.com/637NuhdGdu

“It was murder. It was lynching. It was a hate crime.” -mother of Marcus Smith. #JusticeForMarcusSmith pic.twitter.com/OnIj0Z6LpG

“A-anti-anticapitalista!” Protesters outside the Whitney Museum in NYC earlier today. They were calling out the museum’s vice chairman Warren Kanders. Kanders owns Safariland, the company that makes tear gas used on migrants at the border. #DecolonizeThisPlace #AbolishBorders pic.twitter.com/rApUAAoAgi

In It’s Going Down news, our winter fundraiser is almost over! If you can, please give the gift of revolutionary autonomous media to the world and sign up to become a monthly supporter! Give over 10$ a month an pick out a gift from the store.

Also! Our t-shirt sale is still happening, but we are almost out of shirts! If you want to get a black or white IGD shirt for only $10, now is the time, because after this season we plan on making brand new shirt designs and currently on on our way to running out of the stock we have.

Recently someone asked us if we are still excepting audio submissions for the podcast, and the answer is always yes! Remember, if you want to record and event or conversation or interview with someone on your phone and then send us the audio file, we fill run it on this program – just make sure to get the OK first!

Also, if you haven’t done so, on either mobile or desktop, go to the bottom of the page and enter your email address to our mailing list. Lastly, remember you can have It’s Going Down podcasts set to download directly to your phone by subscribing to IGD on iTunes, Stitcher, and other platforms. You can also simply do it through our podcast RSS feed right here!

Until next time, see you soon!