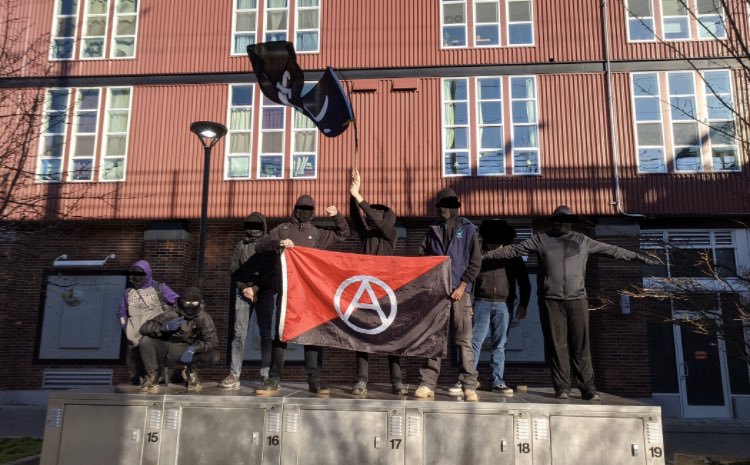 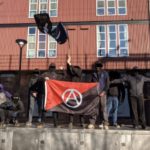 The day began like any other. I had my cup of coffee and I was out the door. I had been debating whether or not I should participate in the strike because I currently am still on probation, I decided to proceed but take caution and bloc up. I came over to the light rail station a little early so I decided to steal a sandwich and a bottled water from a nearby corporate establishment. Once I got back I noticed a rather large police presence complete with bomb sniffing dogs. Then I realized the publicity we had given ourselves. A few minutes later the group came and we left promptly at 12. We shouted chants as we rode the cars back and forth, talking to those interested and trying to ignore heckling boomers who were on there way to the apple cup. Once we were in Capitol Hill, we stopped and had to make a sudden change of plans as a comrade had apparently gotten into a scuffle with someone and that person was talking to the police. We deblocked and chose to take a bus route back. I chose to sit up front in case the police decided to board the bus. I could give the rest of us the time to escape by causing a commotion. Luckily the police didn’t realize we had gotten on the bus and so we were able to abandon them in Capitol Hill. Once we arrived some comrades had to leave to work. I chose to stick around for one last picture which I will be posting along this. After this I myself had to leave to go to work. I deblocced but still didn’t pay. Some pointers for the next time is that we should probably wait a few extra minutes so every one can join us. Anyway Comrades, Stay Safe, Evade, and Spread Anarchy. <3

Our reportback is short. We showed up about five minutes past noon and were only greeted by cops. The demo had left. We left feeling pretty discouraged. Being punctual is only as important as it allows us to be together. Haste has its role in the manuevers but so does having a critical mass of people. We also want to trouble the idea of looking like a black bloc. While it certainly has its advantages, it can come off as specialized or pigeon-holed in the minds of many. Are there ways we can appear to people as if they could easily be one of us?

Also, though it’s true unintentionally leaving people behind can be a lesson learned for those involved it can also turn people off to showing up for the next thing in a critical way. We trust that those involved will have conversations amongst themselves about it and will prepare to do better in the future.