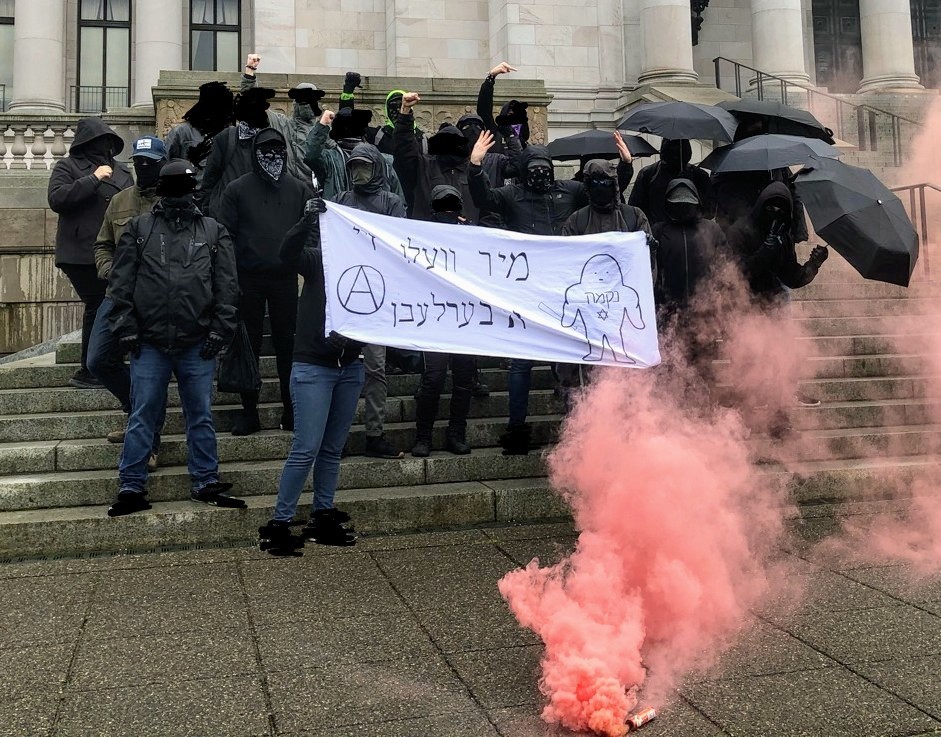 On December 7th, a group of at least 60 assorted antiracists and antifascists in Olympia, Washington held a rally against Nazis at the state capitol. Jason “Gravy” Disimis posted on facebook a few days prior that he was planning his own rally at the capitol building, and we simply could not allow that to happen. Jason Gravy is the owner of Tac Town Tattoo and a member of Crew 38, a Hammerskins-affiliated neo-nazi gang. This weekend also coincided with the anniversary of “martyr’s day,” when Robert J. Matthews, leader of “The Order” white supremacist organization, was killed in a shoot-out with federal authorities on nearby Whidbey Island. Nazis like to commemorate Martyr’s Day with often violent results.

As in 2015 when they threatened to march on Capitol Hill in Seattle, the Hammerskins never materialized. Instead, the antifascists milled about amiably, singing and joking. There was a banner in Yiddish that read “Mir veln zey iberlebn,” or “We will outlive them,” a reference to a story of Jewish Resistance from World War II:

The Germans came to Lublin to set up a “Jewish area” and ordered the chairman of the Judenrat to assemble the Jewish population in an open field outside the city for a “general parade.” As the Jews presented themselves at the appointed time, the German commander ordered them to sing a gay and happy Hassidic tune. The crowd was fearful and confused, but one hesitant voice stated singing the moving song: “Lomir zikh iberbetn, ovinu shebashomayin”– “Let us be friends again, Our Father in Heaven.” The crowd remained unresponsive. The German soldiers threw themselves with murderous blows upon the Jews who would not obey their command. Suddenly, a voice broke from among the crowd singing the same tune with might and joy, but the words now changed to: “Mir veln zey iberleibn, ovinu shebashomayim – We shall outlive them, Our Father in Heaven.” The song gripped the crowd. They sang it with enthusiasm and danced to it ecstatically. It became for them the hymn of Jewish eternity. The Germans, bewildered and at a loss, started shouting: “Stop it! Stop it!” Did they sense it was the song of their doom?

The banner also featured a Golem, a creature born of mud and clay that rises up to protect the Jewish people. While the Golem of Prague had the word for Truth on its body, the Golem of Olympia carried the word Revenge.

Though the Hammerskins did not show their faces at the Capitol, Portland’s Haley Adams and her crew, in a bizarre twist, announced ahead of time that they were going to come stand shoulder to shoulder with “commies” to fight Nazis. It’s unclear whether they’re that stupid, and this was a sincere attempt, or whether this was yet another convoluted grift. Regardless, nobody has forgotten that she is a self proclaimed white nationalist. She and her crew were energetically escorted away by a crew of 60 people who didn’t want to hang out with white nationalists. One unsuspecting onlooker described chuckling at the pleasant surprise of watching the fascists get “told to fuck off by a chorus of protesters with drums, vuvuzelas and the like.”

Skylor Jernigan (Haley’s incel fanboy), contrary to his vow to protect Haley to his last dying breath, fled. The rest of the crew, including Haley, Reggie Axtell, Alyssa Vinsonheler, and Haley’s boyfriend Mack Lewis walked backwards livestreaming until deciding it was time to run. Brandon Brown, Haley’s wannabe journalist, photographer, and Andy Ngo-worshipper turned back around after being pushed out, and went into the crowd yelling, and was relieved of his camera. Meanwhile, the rest of Haley’s crew ran up to the first house they came upon banging on the door asking for help, and then Reggie Axtell puked on the porch.

Having dealt with the white nationalists from Portland, most of the antifascists reconvened in front of the capitol, and milled about a while longer until declaring victory and going home for the day.
As an added bonus, a scheduled Christmas Caroling event at the Capitol was also canceled on account of the alleged incident between antifascists and Haley Adams. Though it wasn’t the same white supremacist rally we had intended to confront, we can still count it as a victory in the War on Christmas.