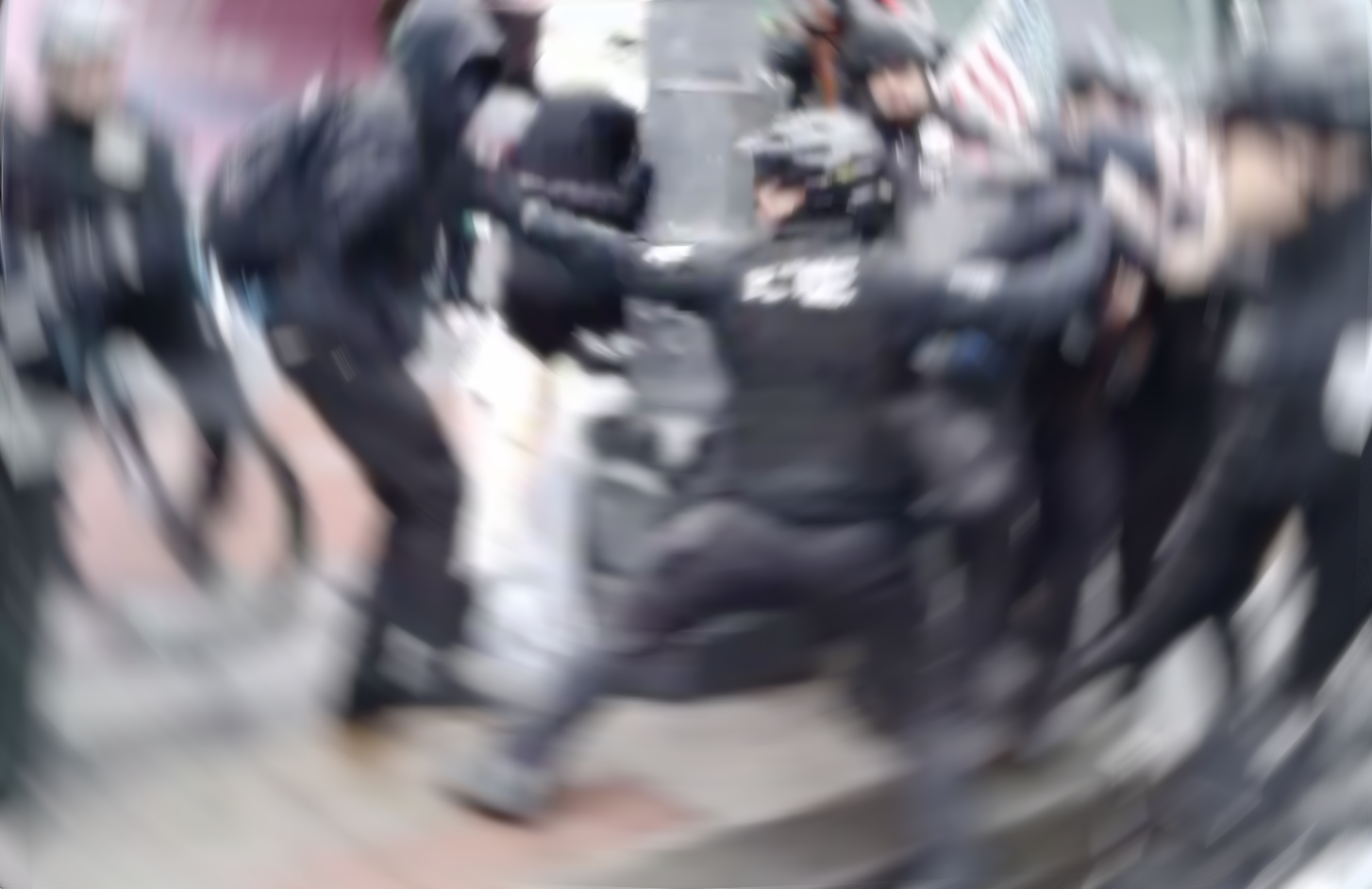 On December 7th around 2pm self-identified Proud Boys, 3%ers, and anti-communists gathered at Westlake park for a flag wave and Trump rally. This was a medium-sized rally for these reactionaries. Attended by 20 or so, it was not as small as their usual half-dozen, but not as big as some of their other rallies they’ve had at city hall. The ultra-nationalist troll Haley Adams was notably absent even having promised to be there due to having been run off anarchists and other counter-protesters at a no-show neo-nazi rally in Olympia earlier that day.

Many turned out to oppose the reactionary rally at Westlake. Some showed up to counter by collecting donations for the unsheltered and 20 or so were wearing mostly black and masked up.

There was a third contingent present. They were dressed in black for added intimidation, covered in body armor, equipped with cameras to get footage justify their actions later(turning them off where footage may do the opposite), their fingers caress the triggers on their pepper-spray itching to hose someone down. This third contingent is, of course, the officers of the Seattle Police Department deployed to project force in the area.

Some agitation between the anti-fascists and the MAGA patriots occurred. A couple times, individual Proud Boys or others wandered over to the bloc standing amongst them, always right next to the police, perhaps as an attempt at provocation. The reactionaries were also followed around Capitol Hill when smaller number started to march. They eventually dispersed cuttig their rally short and the few who remained were kicked out of several establishments they tried to enter. However, the main disturbances were attacks on the anti-fascists by the police.

A few black-clad radicals set fire to an a stylized “Blue Lives Matter” American flag and an SPD officer responded in anger by hosing one of the flag burners down with pepper-spray and extinguishing the fire with the spray.

Another attack by SPD was seemingly unprovoked. An SPD officer rode their bike into some people on the sidewalk and then slammed one of them into a wall making an apparent arrest. Another two arrests occurred after an officer tripped over his own bike. Seemingly lashing out this officer went for a radical he recognized who was slowly walking away from them. When this comrade was targeted another grabbed the comrade’s backpack. The police quickly circled around and in a decisive move violently arrested the two(not that arrests can be non-violent). To add insult to injury, one officer also told a counter-protester, “Shut the fuck up faggot! No-one cares!” when they went to report an assault.

Here are videos of the attacks by SPD officers:

The police by the fundamental nature of their institution are violent. Their duty is to uphold order with force. Historically and in the contemporary they uphold the rule of private property over the needs of people and serve as the shock troops for some amalgamation of ableist-cis-white-hetero-patriarchy. They of course shift their tactics and PR given the situation, but they remain as enforcers of ghettoization, poverty, class society, etc. They have not strayed far from their origins in this country as slave catchers and mass-killers. Coerced unpaid labor itself hasn’t even been abolished for those criminalized by the justice system and the police continue to lock more and more poor people up forcing many of them to work under threat of violence for little to no pay. Just in the past week cops have killed multiple people in a shoot out in Florida, shot a man in SF, shot someone dead in PDX, and shot up a Jersey City bodega killing those inside in order to kill someone who had opened fire on a cop.

Because the police attacks in and around Westlake were recorded, and because they break the veneer of legitimacy for SPD, the department has opened an investigation  into the actions of the officers. As with all things relating to law and force, it is more a matter of social viability than it is formal regulations that dictate what officers can get away with. Rights, whether they are a helpful framework or not, are only respected as long as they are fought for. This is a department that has been under the investigation by the DOJ for excessive uses of force for over a decade and has very little to show for it other than fancy ad-campaigns and the deployment of the most base identity politics. Trusting them to investigate themselves beyond making a PR facade of accountability is foolish.

Also, as Jacky Wang highlights in Against Innocence, to not reinforce the legitimacy of the police in general one should craft their critique without rooting them in the idea of innocence. After all if you are an anarchist and want to do away with the police and the order they continue to inscribe upon the world it seems like it would follow that the police would want to destroy you. It would also follow that you would be guilty of the crimes invented by the owning class you wish to overthrow that are codified in the governments the said owning class control. Of course highlighting excesses of brutality can be useful and legal strategies of “not-guilty” pleas have their place. That being said, it is also the case that police violence is the norm of the everyday social war we find ourselves in between the rulers and the ruled. It is perhaps better to frame the police attacks as an example of the myth of social peace being shattered. We are after all on occupied Duwamish territory. We are after all living in a city with communities who are patrol and occupied by hostile armed forces. What was witnessed that day is an expression of tha violence spilling out into a protest situation. If anything the cops were less violent at that protest than they have been in the typical days streets of Seattle or even the homes of Black people in this city. I don’t say this to downplay the truamatizing violence however. Such violence should be condemned, but that condemnation should be paired with a condemnation of the violence of the everyday lest it run the risk of just reforming the death-machine thus making it more pernicious.

Let us humiliate the police. Let us bravely rescue our comrades from them. Let’s not overly dwell on missed opportunities to do so, but inscribe those lessons on our practice and use the emotions from them next time the chaos breaks out so that we may better will ourselves to act in those critical moments. The success of many police arrests relies on taking decisive action and sowing confusion in the group they are targeting. Be ready for this and look for chances to act accordingly.

Too often we are on the defensive. Our enemies call the rallies and we show up to a well prepared police force and a more organized grouping of the reaction. It may shock you to hear this, but reactionaries and police are also people. As people they also exist outside of protests. They have other patrols they go on. They have homes they return to. They have bars they drink at. In all these places they could be disrupted. Getting a cop fired can also be good. Not in the ways in suggests the police can be reformed, but in the ways it sows discord between the rank-in-file and the brass. Gavin McInnes the ex-Proud Boy leader has often expressed the sentiment, “Fuck the Police…’s Bosses” Arguing that the rank-in-file cop wants to beat the piss out of radicals and marginalized populations, but their bosses’ orientation towards optics gets in the way. It is this tension that the reactionaries played on at the recent Westlake rally. They reactionaries go in knowing deep down that the police have their back and that they both are in service to the same normative order and both project force to enforce this order in the streets.

Their force projection is never total. There are always ungovernable situations that emerge. Let’s work to deepen these ruptures while also increasing our capacity to live autonomously from the police and the owning class they serve.

In practical notes when pulling someone out of harms way it is advised that one wrap your arms around the person’s torso or abdomen as to not risk dislocating their limbs or losing them do to a unsecure backpack. Using this strategy combined with a good grip as picture below and can make it very difficult to separate you from your comrades.

In terms of black blocing, wearing the same recognizable mask or back pack gives one a sort of pseudonymity, but makes IDing you easier and makes you a usual suspect in a way that increases the chances of you being targeted. Cover as many identifying features as possible without making it too impossible for you to operate. It is also the case that people of color with be especially targeted by the police. A thorough bloc that makes it hard to identify skin color will help negate this effect. Though as those targeted by police due to their racialization under a white supremacist system know, both before, during, and after actions the police will target you more than your white counter parts in most situations and one’s actions can never totally prevent racist police violence. Wearing things that you will wear after or before blocing as it may lead to your adversaries IDing you by establishing a continuity based on particular item of clothing such as shoes. It is a little “extra” but comrades in $hile put large hoodies over their backpacks and socks over their shoes to better prevent identification based on such items. Though color isn’t the only thing that standout in a garment wearing a different colored article of clothing than the rest of your bloc will make you easier for the police to target.

To wrap this up, here’s a relevant quote from a communique from last year’s May Day in Seattle:

“I thirst for vengeance. Each comment I read saying this comrade should be shot is another ingredient in this dark ritual I am performing. I have the means, the wits, and now I may have the will to act.”