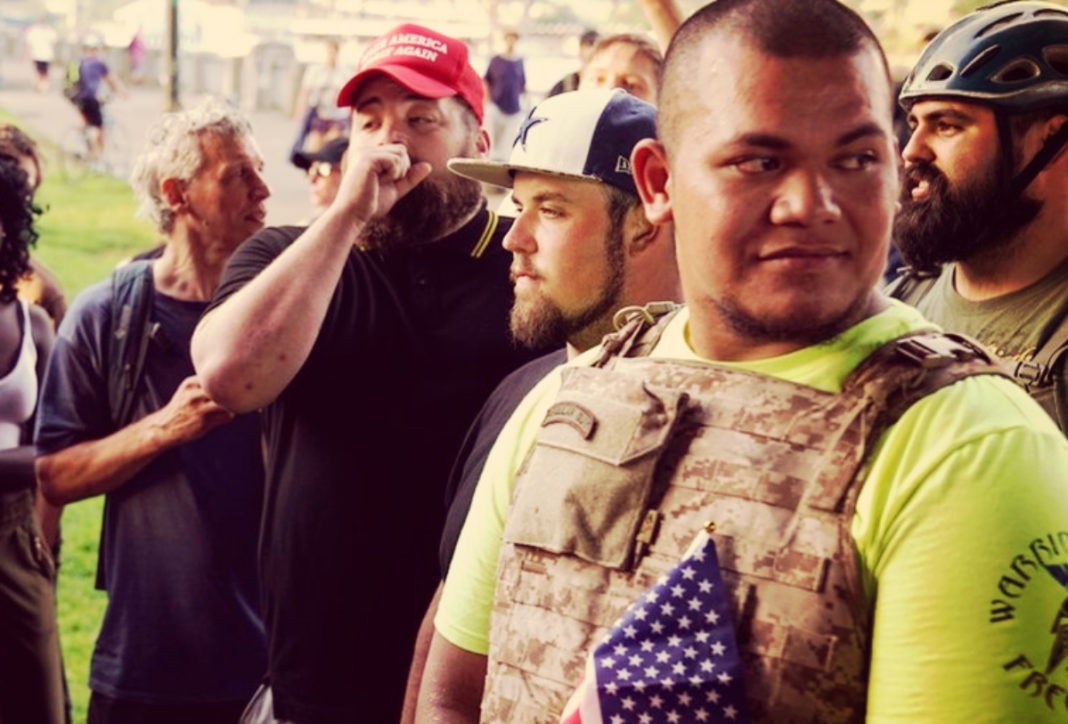 It’s been the battle cry of New Right conservatives-turned-fascists for over two years, and their ever-ready fallback for decades prior. It was the defense used by Richard Spencer, Milo Yiannopoulos, and every other far-right bottom-feeder who capitalized on the Trump campaign. Of course, we always knew it was utter bullshit; nobody could say with a straight face that the curators of a blacklist for leftist professors were interested in defending one’s right to voice their political beliefs without punishment. But in the roughly one-month period prior to the writing of this article, the public was treated to a flood of headlines and social media snippets that put the final nail in the coffin of the “free speech” defense, and poured concrete in the grave for good measure.

The most glaring example came from the mouth of none other than the Major Toht of the Trump era, Richard Spencer. In a podcast with Greg Conte, one of his closest officers, the two figureheads of the hobbled alt-right movement stated plainly that not only do they have no problem with government regulations on speech, but that in the long term, they outright oppose the concept of free speech altogether, the same “I’ll defend to the death” ideal that Spencer used as a shield during every one of his college speaking events. Fitting that these absolute frauds, who formerly insisted that they were neither authoritarians nor even white supremacists, are comfortable enough to simply announce “we lied” now that their chances of forming a lasting political body have nosedived into negative digits. We can only hope this clip made it into the twitter feed of every spineless journo who ever shamed antifascists for deplatforming these obvious charletans.

In the public sphere, the leadership of the NFL obediently capitulated to the demands of the Fuhrer and announced they would be imposing fines on any player who took part in the kneeling protests started by Colin Kaepernick, blatantly infringing upon the constitutional rights of those same players, while simultaneously proving the protest’s core assertion that full citizenship has never been extended to the black community in America. This shunning of the right to protest came just after a spate of high-profile incidents of racially-motivated police brutality, including multiple beatings in Waffle House franchises, the brutal murder of Stephon Clark, and perhaps ugliest of all in this context, the completely unprovoked tasing of Milwaukee Bucks rookie Sterling Brown, himself a professional athlete.

It should surprise nobody that every fascist voice has either been silent or encouraging of this protest ban, revealing that their concern lies only in silencing dissenters of the American civic religion, even if they protest respectfully – Kaepernick, after all, elected to kneel for the anthem rather than sit specifically because it seemed more honorable towards the nation itself.

In the ongoing theater of campus cultural warfare, it was revealed that Stanford professor Niall Ferguson conspired with two conservative students, John Rice-Cameron and Max Minshull, to conduct opposition research against a progressive student activist. The intention was to not only discredit the student in question, but more broadly to remove leftist influence from campus politics entirely. Ferguson’s messages read like the dialogue of substandard young-adult fanfiction: “The price of liberty is eternal vigilance,” wrote Ferguson, regarding his attempts to intimidate a 19-year-old.

Rice-Cameron, it should be noted, is not only a member of the Stanford College Republicans, but is also an associate of Turning Point USA, the ever-willing vassal of collegiate crypto-fascists and self-styled defenders of free speech on campus. True to the ulterior intentions of TPUSA, Rice-Cameron responded, “Slowly, we will continue to crush the Left’s will to resist, as they will crack under pressure.” Ferguson resigned from the steering committee of the Cardinal Conservatives after the scandal broke, but he has been allowed to keep his job. Unlike leftist professors who have been blackballed and inundated with death-threats for voicing honest political opinions, this fascist professor will likely go totally unscathed, having explicitly plotted to harass a student over their political beliefs, using conservative students as collaborators.

Vic Berger of Super-Deluxe became the victim of right-wing vigilantism after producing a video comprised of clips of Gavin McInnes making an ass of himself on his own Limbaugh-esque talk show. For the crime of cutting together publicly available footage, a group of Proud Boys – Gavin’s increasingly violent white nationalist cell – arrived at Berger’s house to threaten him and his family. McInnes has halfheartedly dismissed the event as a fabrication, but then again, he also claimed his gang wasn’t involved directly with white nationalism right before they were photographed in attendance at Charlottesville. So much for the declarations of free speech absolutism from the byproduct of Gavin’s failed career as a cultural critic, and his success as a rodeo clown for the most self-indulgent elements of Manhattan hipster fascism.

Even the judicial system itself has been repeatedly unmasked of its supposed commitment to free speech in just the last few weeks. Rakem Balogun, co-founder of the Huey P. Newton Gun Club, became the first person arrested under the newly-minted label of “black identity extremism,” a neologism engineered by the FBI as a continuation of neo-COINTELPRO tactics. Beginning in March of 2015, when Balogun protested against police brutality, the FBI began monitoring his social media accounts and online activity.

Though using his anti-police social media posts as evidence of his terroristic intentions, special agent Aaron Keighley was forced to admit in court that not only did the FBI have no evidence of specific threats on behalf of Balogun, but that they had only learned of the March 2015 protest from an InfoWars video. Balogun has lost his job, his car, his house, and had his family life thrown into total chaos. He joins the long, long list of American black radicals who have been extra-judicially punished for exercising their rights to political activity, assembly, and of course, free speech.

Adjacent to him is Cedric O’Bannon, the journalist who was stabbed by a neo-Nazi while filming the 2016 Sacramento riot, only to become the victim of surveillance and intimidation by police officers who were working in tandem with the would-be murderers.

Meanwhile, the ongoing charade of the J20 trial exposed the deliberate efforts of the government to silence or brutalize antifascists in general, and anarchists in particular. Defense attorneys discovered that federal prosecutors had edited footage collected by Project Veritas, the brainchild of four-time exposed hoaxer James O’Keefe, eliminating segments of footage that suggested there was no larger conspiracy in the works, nor any official organization between the participants, as asserted by the prosecution. This is merely the latest incident of corruption and duplicity to come out of the J20 trial, a case which began with an admission from the prosecution that there was no physical evidence tying any of the 200 defendants to any crime whatsoever.

Nonetheless, the trials will continue to drag on into their second year, and even if not a single defendant serves time, the primary objective of the prosecution has already been accomplished: the lives of these defendants have been torn apart by the preceedings. Yet again, the banner of “freedom of speech” conceals nothing more than shameless political repression by the United States, a criminal’s brand on the cheek of those who fought back the earliest and the loudest when outright fascism reared its ugly head.

From now on, when the words “free speech” are used as a defense of fascist organizing, of white supremacist rhetoric, of bigotry masquerading as intellectual inquiry, let it be understood what those words actually mean. The freedom of speech, as outlined by the constitution, is a flowery ideal that has never borne out in reality. The broader, more philosophical idea of “free speech,” similarly, literally cannot exist in a hierarchical society wherein a select few are given full citizenship rights, and a lesser shade is doled out to every other person based on their caste and their loyalty to American mythology.

“Free speech,” as defined by the right wing, is a euphemism, a verbal card trick. It refers to a specific kind of speech, transgressive only insofar as it demands a return to a previous incarnation of American life, scandalous only because it doesn’t apologize for its advocacy of explicitly racist, queerphobic, Islamophobic, jingoistic, or anti-feminist beliefs, tentpoles of the status quo. It’s the free speech of the already free, the lamentation of the privileged, the outcry of the unoppressed in support of the oppression of others. In short, “free speech” belongs only to American loyalists, the kind of grotesquely, embarrassingly proud patriot who could denounced British tyranny while surrounded by slaves.

The reality is this: freedom is determined by material conditions alone. There is no magical quality to the words of the constitution, and any right can be denied to those who lack the social legitimacy or political power to enforce that right for themselves. This is why disarmament has been unthinkable for white America, but standard practice for black America. It’s why we exist in a time when voter suppression is worsening, when female autonomy is being threatened long after Roe v. Wade, when a blatant campaign of ethnic cleansing is being perpetrated in the era of the 24-hour news cycle.

There will be no freedom for anyone until each individual is equally capable of self-defense, political agency, and material security. Furthermore, we are not obligated to extend that ideal of “free speech” to anybody who seeks to withhold those fundamental conditions from the rest of us.