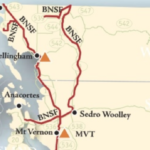 In solidarity with the Wet’suwet’en fight for sovereignty and life against colonizers and their greed/dominance, and in response to their callout for solidarity actions, we disrupted all rail traffic in so-called Whatcom County, ceded Coast Salish territory. We targeted multiple points along both east and west tracks, and we disrupted the western line both north and south of Whatcom’s two refineries, Phillips 66 and BP’s Cherry Point Refinery, preventing transport to and from the refineries.

As another solidarity communique notes, one major rail line connects Seattle to Vancouver, passing and transporting product from 4 of Washington’s 5 refineries along the way. The line splits just south of Whatcom County, with the majority of traffic using the westernmost track (along the coast) and other cargo flowing along the eastern/backup line (along highway 9).

We modified the basic jumper-cables technique for disrupting the current that runs along the tracks. This method essentially creates a dead zone along the tracks and prevents operators from knowing whether or not a train is present. Along with hiding the cable that connects the tracks, our modified technique is effective on both joined and continuous rail.

Our action is the latest in a series of solidarity acts with the Wet’suwet’en: In Hamilton, Montreal, Minnesota, Kingston, Guelph, Burlington, Vancouver, Olympia, and once before in Whatcom county, local people have taken power into their own hands.