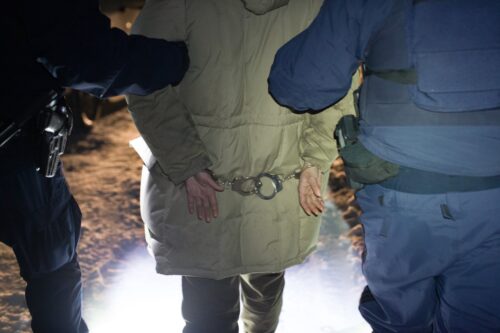 reposted from Unist’ot’en.camp and various twitters

"People are in good spirits. We're ready to stand and help to defend this territory." #Wetsuweten #Unistoten #cdnpoli https://t.co/FMS7sKbTlj

Six people have been arrested and several others, including members of the press, have been detained and removed from Wet’suwet’en territories in an aggressive pre-dawn raid by RCMP on behalf of Coastal GasLink (TC Energy). Reports and footage are coming in from the siege. Dogs were used, media was banned from filming arrests. Militarized police with night vision and automatic weapons raided the camp in the dead of night.

4:55am – It’s not yet 5am – still totally dark out – and we’ve just heard RCMP made their first arrest at the #Wetsuweten monitoring post at 39KM. Cops are surrounding people there and beginning to clear the road to the Gidimt’en checkpoint.

5:05am – We’ve heard 13 RCMP vehicles headed up the road earlier this morning. Up to 4 arrests have been made now, and RCMP are taking down tents. Our understanding is these tents were NOT blocking the road and are not part of the injunction area.

5:30am – We’re hearing reports from the front line that some RCMP had their guns out – not pointed at people – but guns in hand.

We’re told that even with more than a dozen vehicles out on the territory, the Houston community hall is still full of cops waiting to invade our lands.

5:43am – We estimate more than a dozen cops on site, with six cops surrounding the person communicating updates over radio.

5:56am – The person on radio at 39km reports RCMP have broken in the windows of their vehicle.

6:22am: We have lost all communication with the Gidimt’en watch post at 39KM after RCMP smashed the window of the radio vehicle. It’s still pitch black out.

6:43am: We have reports that RCMP are now blocking the forest service road at 4KM.

6:59 am: We have reports RCMP have headed up from town in an approximately 20+ vehicle convoy. #Wetsuweten #WetsuwetenStrong

7:22am: 36 vehicles, 1 ambulance and heavy machinery went up from 4 KM. At least 2 bulldozers and excavator.

7:48 am: RCMP are transporting the 4 arrested supporters to Houston. BC. Everyone at 39KM was arrested except media. Media that were at 39km are being driven out in a police van.

All photos by Jesse Winter @jwints

A filmmaker working with me was detained and removed from the territory, told not to film tactical police with assault rifles, prevented from filming RCMP breaking a truck window to haul out a supporter of the Wet'suwet'en. https://t.co/ePoO5MnQfL