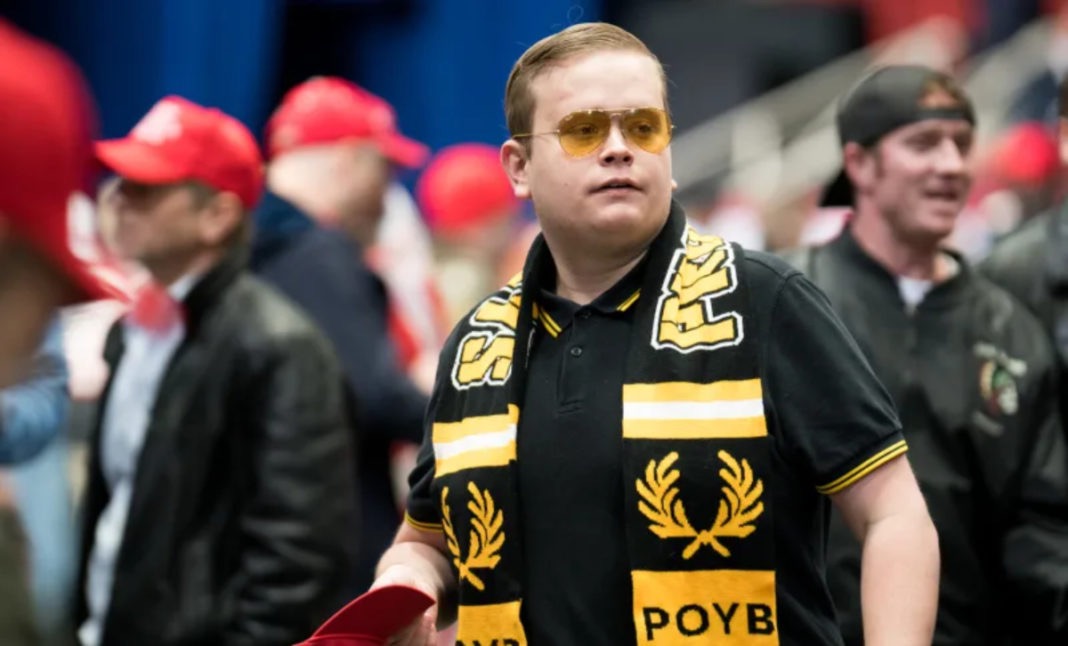 The Proud Boys have recently elected a new “Elders Chapter” in an effort to save face in what has been bad press over the last handful of weeks. The Alt-Right fraternal organization has become infamous over the last two years for their street-level violence and harassment of leftist activists and women’s reproductive health-clinic clients. Earlier this fall the Proud Boys engaged in a violent brawl in New York City that was caught on camera, resulting in a massive legal investigation. The fight took place after a talk by Gavin McInnes, the founder of the Proud Boys and leader at that time. After legal pressure in regards to the incident McInnes made an announcement regarding his departure from the Proud Boys. Similarly, Alt-Right speakerbox Milo Yiannapolous made a public statement announcing his departure. As the leadership of the Proud Boys disappeared and the media spotlight became increasingly negative, the violent street-gang scrambled to make things right.

Augustus Invictus, Satanist Neo-Nazi lawyer, announced on social media that he would be taking the throne for the Proud Boys, yet days later the street-fraternity would publicize the rearrangement of their organization by posting “The Constitution and Bylaws of Proud Boys International L.L.C.” on their official website, c/o’d by the Van Dyke Law Firm, a lawyer with neo-nazi ties himself (we’ll touch on that later). This announcement did not name Augustus Invictus at all, and while the original posting stated it was “WITH MEMBERS NAMES AND EXHIBITS REDACTED FOR PUBLIC RELEASE,” the authors did not properly redact the document, publicizing the names and leadership positions within the organization. 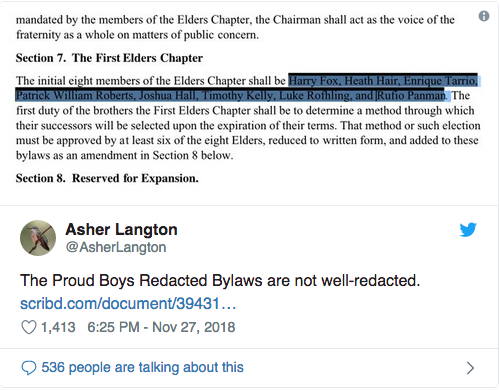 Splinter News was the first news outlet to write about the unredacted document, posting a screen-shot with the names of the newly elected Proud Boy elders. Their names as listed in the unredacted version of “Section 7. The First Elders Chapter” are Harry Fox, Heath Hair, Enrique Tarrio, Patrick William Roberts, Joshua Hall, Timothy Kelly, Luke Rofhling, and Rufio Panman. While the Proud Boys are putting on a public show of cleaning up house after intense legal pressure, it is clear that their veneer of legitimacy is pencil-thin.

Heath Hair has been documented by Atlanta Antifascists as a Georgia leader. Hair has been credited with reorganizing the state chapter, and he’s also the admin for the Proud Boys Chapter Portal and International Vetting group on Facebook. In short, he’s very active in recruiting new members to the group. While Hair was once listed as a member of IATSE Local 479 and as working as a gaffer, it turns out the union expelled him months ago.

Henry Tarrio, aka Enrique Tarrio, claims to be the president of the Miami, FL chapter of the Proud Boys. He runs the online Proud Boys store at uhuru.com, selling shirts that say “Right Wing Death Squad.” Tarrio posts on Instagram about killing communists, was present at Unite The Right in Charlottesville 2017, and both June 30th and August 4th of Summer 2018 Patriot Prayer demonstrations in Portland. Tarrio is clearly deeply embedded within the Proud Boys in an organizational capacity as well as an attendee at some of their most violent outings as an organization.

Joshua Hall took the credit for creating Proudbook, the social media and dating website for Proud Boys. Hall’s Facebook background picture at the time shows him with six other men standing in ankle deep water, some holding firearms of varying degrees, one holding a paddle pointed upward between his legs, presumably in Southeastern Texas where an intense hurricane caused massive floods.

Luke Rohlfing, or “Rofhling” as it’s mis-spelled in the Bylaws document, is a writer for Big League Politics, appears to be from St. Louis, MO, and engages with the Colorado Proud Boys. In June of 2017, Rohlfing organized a rally in Boulder, CO where neo-Nazis William Scott Planer and Josh Yeakal were in attendance. As some may recall, Planer was present and active at the Traditionalist Worker Party rally on the steps of the capitol building in Sacramento, C.A. in June of 2016. Planer was documented hitting an anti-fascist in the head from behind with a flag-pole, and is currently awaiting trial on assault charges. To repeat: Luke Rohlfing organized a rally and welcomed the presence of neo-Nazi William Scott Planer.

Rufio Panman, aka Ethan Michael Nordean, may be the most notorious of all the Proud Boy elders. He was infamously caught on camera delivering a knock-out punch to an anti-fascist during the brawl of June 30th, 2018 in Portland. Both Gavin McInnes and Alex Jones invited him on to their shows in the aftermath to celebrate his “bravado.” Ethan Nordean has been documented numerous times violently attacking anti-fascists, marching with Nick Boling (another prominent Pacific Northwest Proud Boy), as well as giving an interview with James Allsup, a member of the anti-Semitic and fascist organization Identity Europa. Panman runs a supplement company called Bangarang Elite Supplements that lists an affluent cul-de-sac in Auburn, WA as it’s address.

This is all without mentioning the lawyer who C/O’d the entire document, J.L. Van Dyke, who has represented various members of the Proud Boys since at least the summer of 2017. Van Dyke has acted as a sort of “legal adviser” for the Young Americans for Freedom, a Michigan State University student group which was listed as a hate group by the Southern Poverty Law Center. More recently, in 2014, he and Kyle Bristow, the head of the YAF at MSU, collaborated on documents in favor of Michigan’s same-sex marriage ban. This was written on behalf of Matt Heimbach’s Traditionalist Youth Network (the organization which would become the aforementioned Traditionalist Worker Party). They called same-sex marriage “affront to the health, safety, morals, and public welfare of the residents of the State of Michigan.”

In The Constitution and Bylaws, “Article I, Section 1, Purpose”, the Proud Boys list “the promotion of western civilization…” as one of the many driving forces behind their organization. Under this banner, the organization has been linked time and again to white nationalism, anti-Semitism, and extreme misogyny. While the Proud Boys may be feigning a more legitimate pose as an L.L.C. complete with clauses against racism, discrimination, violence and illegal behavior, as evidenced by their new Elders, this is all just smoke and mirrors. The new roster of Elders showcases a propensity towards violence and fraternizing with open neo-Nazis.

It is important to remember that the Proud Boys are not just a violent misogynist street-gang who are willing to welcome neo-Nazis into their rallies, but they are have also developed more sophisticated capacities in regards to rearranging the regional chapters, recruitment, managing web-stores, etc. At the bottom of the last page of The Constitution and Bylaws, it states that the “bylaws were ADOPTED with the votes tallied as follows; 86 -Aye, 35 – Nay.” Over 100 Proud Boys gathered at an organizational level to discuss and make official their organization founded upon white nationalism and misogyny. Anti-fascists must not let the seriousness of the situation eclipse us.