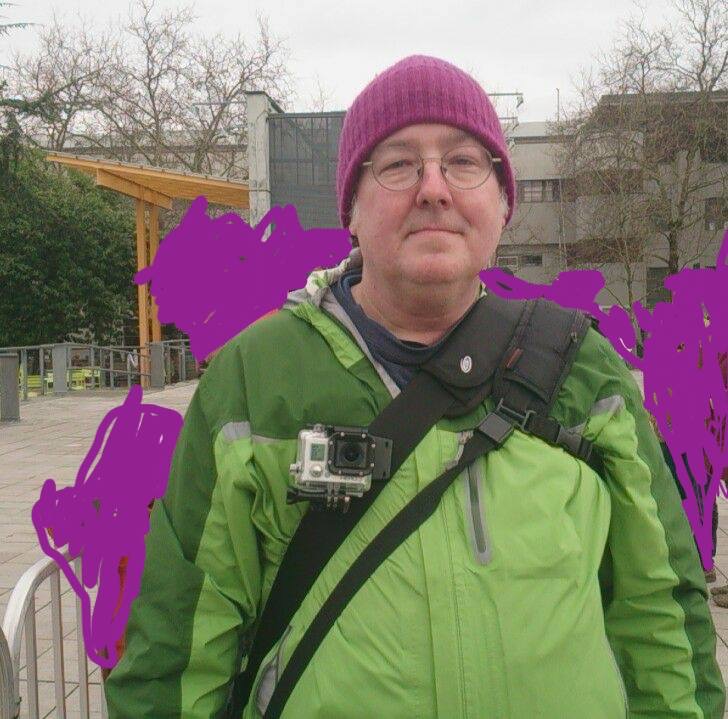 TL; DR: Jerry Savage is an ‘antifascist activist’ who doxxed other activists in black bloc, works with the police, reacts badly against criticism by lashing out and threatening people, purposefully misgenders non-cis activists, and aims to profit off of our collective hard work. He is a severe liability to the Seattle Antifascist Community, and should be disavowed.

Jerry Savage is a problem.
You see, Jerry thinks he is an antifascist, but we at Solidarity & Direct Action (SoDA) hold that he is, as a matter of fact, not an antifascist at all. We find his approach to antifascist organizing to be highly problematic, as his relationship toward the greater Pacific Northwest antifascist community is nothing short of antagonistic and parasitic.

He knows nothing of Solidarity, or of autonomy, and has diametrically juxtaposed himself to the principle of diversity of tactics. The supposed “unity” that he professes to be about is set upon the condition that the work should be done Jerryʼs way, or else he may try to incriminate you and/or expose you to fascists et al.

Take, for example, this Tweet of Jerry’s regarding Willem Van Spronsen, an antifasist who gave his life in the struggle against Fascism at the ICE Facility in Tacoma. Complete with ableist slurs:

Nice, cite the crazy guy that made cops and fasc want to kill people. Brilliant. Keep doing that. Thankfully I've got nothing to do with him. I'm sure you view him as a hero.

We hold that Jerryʼs poor excuse for praxis runs completely antithetical to being anti-fascist and with this document we intend to spell out in no uncertain terms why he is a toxic element who should be avoided and shunned by anyone who wishes to do real, secure and effective antifascist work.

We donʼt feel safe working with Jerry. His very presence at demonstrations warrants being on-guard, not just from fascists and the cops(fascists,) but from Jerry and his vehement snitch-craft. You might see him at protests carrying a camera while fascists and ant-fascists collide, undoubtedly aimed at both fascists and his militant antifascist opponents alike. There is a pattern of his lack of solidarity with the antifascist community which he not only seems to think he is part of, but which he attempts to be self-appointed leadership of, and there are many receipts to show this pattern.

That's absurd. I started one of the largest antifascist groups in the region, made up of a cross section of Seattle. I'm going to be incredibly angry if you get any of these kids hurt or busted with your ACAB bullshit that does nothing more than make cops hate antifascists.

Some remarkable and dissonant features of Jerryʼs persona are his affinity for cops, his belief in the rule of law, and his dogmatic insistence that others in the antifascist community adhere to these sentiments. Jerry is operating under the naive assumption that the police are primarily charged with the task of upholding civility and order, and that they are the protectors of our rights to free speech and assembly, and that any police behavior which deviates from this task is merely a matter of the personal biases of individual officers. However, it would be safe to say that the overwhelming majority of antifascists understand this to be furthest from the truth.

Jerry gets Big Mad when protests against the Seattle Police Department are held, by activists who both have some very real issues with SPD, and with the concept of policing in general: 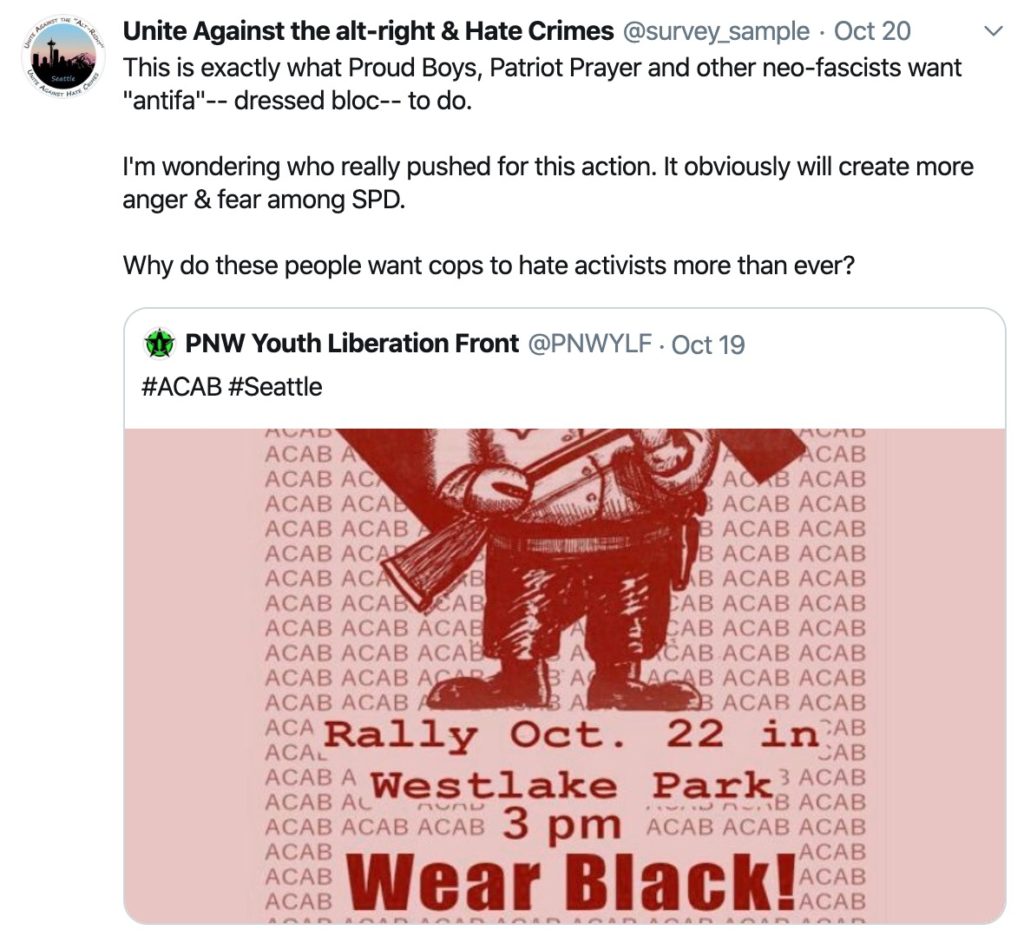 We in SoDA certainly understand that the institution of the state is rotten from the roots up, that the police are primarily charged with the task of political repression along racial and class lines and the upholding of the interests of the capitalist class that public safety is at best a secondary function if even a value at all, and that any individual who would sign on to this institution bears culpability for the worst acts committed by any of its members up until the day that that individual turncoats on their fellow officers, renounces said institution, and blows the whistle on all witnessed misdeeds.

As it has been said before, police brutality is not merely a bug, but a feature of the police state.
This is why we will continueto say “ACAB” until this evil institution and the capital it protects are abolished once and for all.

Any antifascist who has been out in the streets enough knows that the cops are not our friends, and most of us have come to realize through struggle that they are nothing more than brutal agents of political repression, guardians of the colorline, and frontline protectors of capital interests. Many of us understand their history, dually rooted in subjugation of Black slaves and the repression of all manner of labor and social struggle coming from the general working class.

The police have maliciously beaten and jailed us and our comrades. We have watched all of the viral videos of them terrorizing and executing Black and Indigenous people in the streets with literal impunity, and many of us are of these communities and have had these things happen to us and ours personally. We have seen them incarcerate people by the millions, tearing apart families and communities, and many of us come from such torn families and communities.

Coming from such a common ideological and/or experiential orientation, we are insulted by the insinuation that by calling the police exactly what they are, and treating them accordingly; AS OUR NATURAL ENEMIES; that we are bringing repression upon ourselves. We recognize this talking point, common to both liberals and conservatives, as victim blaming, and it must not be tolerated from within our ranks.

Jerry has repeatedly parroted this victim-blaming sentiment, and has not only verbally condemned people for their expressions of anti-cop sentiment, but has on at least two occasions threatened to turn in antifascists for illegal activities. He has lead on to having compiled a growing database of dirt to hold against his political foes within the antifascist community, and has doxxed a couple of people by posting their names and other information to his Twitter account, as well as hisFacebook group “Unite Against The Alt Right,” of which he is the founder and only administrator, both of which are known to be infiltrated and monitored by fascists.

Just one recent example, where he threatened to ‘out’ antifascists in Bloc, who engaged in self defense:

Just remember tough guy that if anything at all happens to me, you'll be the first one to get a call. Don't be such a fucking coward if you want to start fights. My face is all over the internet with my name. You want to start needless violence, expect to be outed.

Though he claims this behavior to be inadvertent, he has repeatedly refused to redact said information when he has been called on it. He clearly does this as a means of punishing his militant antifascist opponents in order to teach us all a lesson by using them as an example. This is the opposite of solidarity. This is blatant collusion with the state, and it is ultimately helping the fascists that he claims to oppose. The accompanying sentiment that Jerry regularly displays is his belief that our enemies being punished by the state is somehow a measure of success of the antifascist movement. On the contrary, as police and prison abolitionists and enemies of the state, we place no value in the so-called national security or the carceral state, and understand full well that any repressive measures used against Far Right militants will no doubt be used exponentially against our own milieu, and with the justification of law enforcement having done their due diligence to punish “both sides.”

Here is a classic example of this behavior. In this tweet, Jerry purposely misgenders a comrade, who has done a hell of a lot of genuine work in the local anti-fascist community:

And when he is rightfully called on this blatantly transphobic and disrespectful behavior? Jerry strikes out and issues threats: 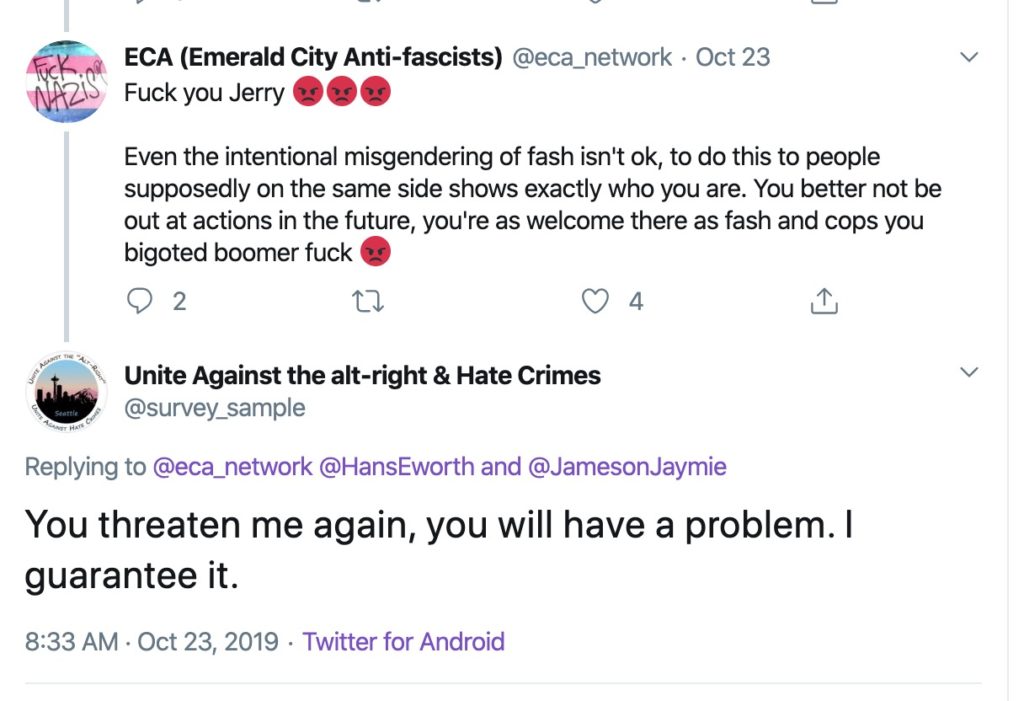 It should be said that the state has no real sense of justice, and that their primary concern is the consolidation of power, and the stateʼs monopoly on violence is key in maintaining their power. While the fascists certainly aid the state in violently repressing the states most potent enemies, they must at least give the fash some slaps on the wrist, however symbolic they may be, in order to keep any semblance of Far Right challenges to the state in check.

This is the broader picture to be taken into consideration when whenever we are tempted to gleefully gloat over the legal demise of our enemies. Another remarkable thing about Jerry Savage and his relationship toward the greater antifascist movement is his parasitism. Jerry likes to take all of the credit for shit that he didnʼt do. He is nothing more than a leech who has piggybacked on the work of real antifascists, and has even recently began to raise funds in an audacious effort to get paid for the same type of work that real antifascists have been doing for free for decades. 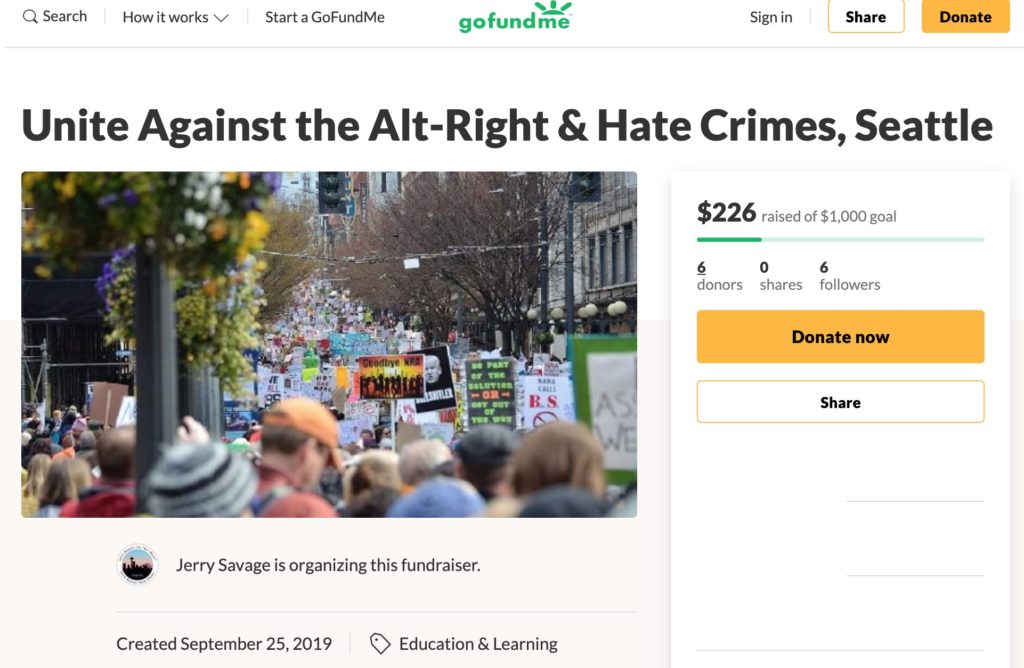 We must deny him this position within the movement which was borne of and kept alive by generations of antifascist militants before us. Many of them are still among us; struggling thanklessly. These militants perform some of the most dangerous political work which one could engage in; most of the time anonymously and secretly, because of the nature of the work. We must carry on their legacy and deny him his would-be legacy, as a new generation of antifascists must arise and fight to win – with BIPoC, queer and trans folks, disabled folks, and all folks belonging to marginalized communities at the forefront of the struggle. Not some cis, white Boomer with paternalistic behaviors. He is clearly yet another cis white man with a savior complex, and he wishes to be materially compensated for his valiant leadership. It is our belief that he needs the coattails pulled out from underneath his feet.