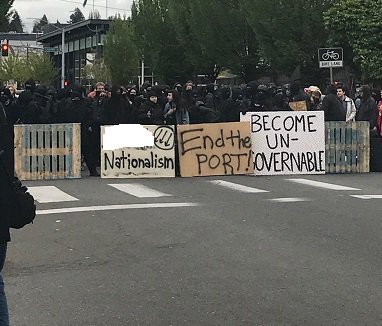 A group of about 100 people, mostly in black bloc, gathered at 4th and Capitol in downtown Olympia at 6pm last night in response to a call to march “against the Port and its world” in celebration of May Day. There was an incredible abundance of supplies—shields, reinforced banners, flags of various sizes, and regular banners. The slogans included “Delete the Port – Delete the State,” “Against the Port and its World,” “Become Ungovernable,” and “We Are The Birds of the Coming Storm.” Some people came carrying a banner reading “sn(A)cks” and handed out hot dogs to the crowd. A sound system arrived, bringing a festive mood.

After hanging out for 45 minutes with a handful of bike cops watching from across the intersection, the group took the street and marched up 4th chanting anti-prison, anti-racist and anti-nationalist slogans. The march came to a halt at 4th and Jefferson, and folks began building a blockade on the train tracks and shooting off fireworks. The legacy of last November’s week-long train blockade emboldened many to attempt to reestablish an autonomous zone. Various pallets were pulled out of nearby alleys and dumped on the tracks, but the large police presence made it difficult to build a substantial barricade. As we tried to acquire more material, a group of 50 or so police assembled in riot gear started marching in formation first west on 5th then east towards us on 4th. Behind the line of shields and reinforced banners, people in the bloc hurled rocks at the police. The mainstream media has reported that nine cops were injured.

Several apparent alt-right/fascists followed the march from the beginning, one saying he was there to “oppose communism.” There was also a crew who appeared to be white vigilante patriots, some of whom were wearing masks (including an American flag mask), who started following the march near the Artesian Well. Some have speculated that this group was associated with the downtown houseless community while others have speculated that they are associated with the fascists in attendance. The authors of this report-back can’t say for sure but both could certainly be true. The patriot crew immediately started antagonizing the march, taking issue with the slogans on the banners and the chants. After the patriots started shouting racist epithets, someone emerged from the bloc and deployed bear mace in their general direction. The mace unfortunately hit bystanders, including a dog. The media has tried to paint this as the march intentionally attacking bystanders but it should be made clear that this is false nonsense perpetuated by capitalist media. That said, the authors of this communique would like to encourage people to be careful using pepper spray or bear mace in crowds–it very often hits unintended targets due to wind or other factors.

After this altercation the police started firing pepper balls, and the demo moved up Jefferson to State. Reinforced banners and shields were used to defend the march and allowed people to regroup multiple times. The police advanced with waves of pepper balls and concussion grenades pushing the march north into a gravel lot by the propane store. In this lot the crew of vigilante patriots seen earlier reappeared with rocks in hand and began throwing rocks at marchers and generally looking for a fight. With riot police behind them and backing them up, the vigilantes and the march exchanged volleys of rocks. The march eventually went east on Olympia Ave, pulling a fence into the street to slow the advance of the police and vigilantes. The march then cut through the transit center and made its way to 4th and Capitol where it had started. At 4th and Capitol, US Bank had its windows smashed. The march then continued up Capitol with reinforced banners and shields catching less-lethal rounds from behind. The Olympia Federal Savings Bank, a bank known locally for evicting homeless people from their alley, then had several of its windows smashed. A block further up Capitol, more windows were smashed at the Starbucks on Legion.

At this point the march began to scatter, with many running through Sylvester Park and south into the surrounding neighborhood. A window at Key Bank was smashed. The march split as people tried to disperse. At this point individual accounts diverge considerably as people made their separate ways. Some were harassed by the patriots and 9 comrades were arrested, many of whom are trans people and people of color. Some were arrested in a group outside the library. Though they were forced to lie face down on the pavement, one arrestee, head held high, defiantly sang antifascist anthem “Bella Ciao.” At the time of this writing all are being charged with felonies and arraignment is in a few hours. Please consider donating to this fundraiser. to help out the folks arrested.

After hearing that comrades had been brutally attacked, with 9 kidnapped by the racist and transphobic pigs, a group of about 40 people gathered outside of the creepily-named Thurston County Accountability and Restitution Center at about 11PM on May 1. Many of those present did not participate in the march, but nonetheless showed up to support. We had several drums, a megaphone, a saxophone, and a whole bunch of pots and pans. People were able to make a tremendous amount of noise to let our comrades know that they are not alone. We did one lap around the facility and then went around to the front of it, holding a banner with faces of the 1886 May Day martyrs on it. At that point an absurd number of police cars arrived, roughly 15, mostly sheriffs. They started suiting up in riot gear and the march dispersed.

Noise demos are an anarchist tradition, a way to express solidarity with prisoners. Though they can be risky in that they present a way for police to identify potential participants, it is important that we show up for arrested comrades, and encourage others to do the same. The action doesn’t end when we head home after the demo. After the party there’s the after-party: jail and court support, aftercare and emotional support, decompression spaces, fundraising, writing report-backs and analysis, and continuing to spread the spirit of revolt that brought us into the streets together.

Though it is typical for hecklers to troll May Day and other anarchist street demonstrations, this year showed a clear escalation in antagonism from right-wing and fascist forces. Out on the street yesterday, it felt like civil war. Fighting against two different opponents—the police and right-wing vigilantes—was very difficult. Could de-escalation have been used to keep the patriot types at bay while we we defended ourselves from the police? How do we differentiate organized alt-right/fascist militants from random aggressive jerks? How do we better ensure that we don’t hurt or enrage bystanders?

The march perhaps began too early in the day—it might have been better scheduled for two hours later, at 8PM. Darkness would have provided better cover and made it easier for folks to disperse and de-bloc.

Reinforced banners and shields were invaluable but when matched by huge numbers of police, we were at a drastic disadvantage. In the future, folks should continue to be intentional in their preparation: next time, let’s have even more shields, light body armor, and helmets. This cannot be over-stated. We held our ground as best we could but ultimately failed to construct a barricade on the train tracks.

Shields provide cover and protection, poles and projectiles can be used both offensively and defensively, and spray-painted slogans leave messages in our wake. What kind of tools do you feel most comfortable using? Have you practiced? How can affinity groups organize action roles to maximize safety and effectiveness? What formations work best in a given situation? Have you studied the terrain—do you know the alleys, hiding spots, escape routes? Let us take strategy and tactics more seriously and have ongoing conversations about how we can maximize our strengths (anonymity, fluidity, solidarity) and minimize our weaknesses (vulnerability, disorganization, small numbers).

In the course of an hour we experienced intense joy, desperate fear, and profound sadness. We should be proud of ourselves for the courage we displayed in the face of impossible odds. We defended ourselves against the cops and the vigilantes and the pepper balls and the flash bangs. We sent out signals of disorder and showed that the facades of capital—of the Port’s world—are not invulnerable to our rage. We honored the memory of the Haymarket Martyrs and the rebellious spirit of May Day. Let this be a lesson in the power of solidarity and passion. With greater numbers and better organization, anything is possible.