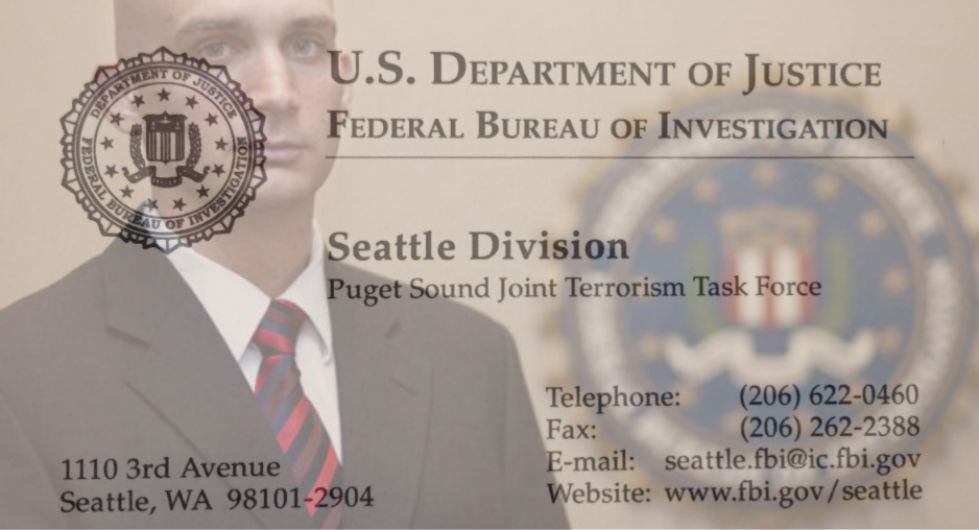 On Wednesday April 26th four different houses in the Seattle area were visited by FBI agents who left cards. At least one of the cards was signed Special Agent Michael Baldino and another by Special Agent Sean Replogle.

On Thursday April 20th two anarchists were detained by the FBI in Seattle and Denver and served with warrants for “identifying property” (fingerprints). The warrants cite “unlawful possession of a prohibited explosive device” as the crime being investigated. They were then questioned about protests on May Day 2016 in Seattle. Both people were detained and released and as of this writing no charges have been filed.

At about noon on the same day, April 20th, an anarchist running around Capitol Lake in Olympia saw from a distance a sketchball, wearing a white baseball cap and sunglasses, messing with the rear end of their car. As they approached the sketchball noticed them and walked quickly away. As the anarchist drove away, the sketchball then crossed the street in front of the comrade’s car, covering his face with his hand to avoid being seen. The sketchball then turned into the Evergreen Plaza building, which houses the Olympia FBI offices.

On April 5th a comrade in Bellevue came home to find that an FBI agent working with the JTTF had left a card at their house asking to speak with them, also signed Special Agent Mike Baldino. An anti-white power demonstration occurred at Bellevue Community College on April 5th. Earlier that week, they had been identified by a security guard after taking down posters for American Vanguard (a fascist group) at the community college.

These four different instances may reflect a more aggressive FBI under the Trump administration, or it may just be the regular pre-May Day intimidation that often happens during the last days of April. In April 2013 the FBI cast a wide net, visiting and questioning activists, artists, punks and others; yet little to nothing came of it. It’s likely that others have been visited by the FBI or other agencies in the past week, but have not thought to tell their comrades. If you have been visited or know someone who has, please make details (not speculation and rumors) of what happened public and call the National Lawyer’s Guild (888) 654-3265.

A note from the PSA editors: feel free to submit updates to this article or other experiences with police harassment here

The authors of this article compiled these four accounts because we believe that in the face of the FBI’s secrecy and intimidation tactics, communicating about what’s going on is vital for people’s safety. Remember that the FBI already knows that they have talked to you – telling your comrades about what happened is the safest thing to do. Also know that often when the FBI flex and try to intimidate someone, it’s not necessarily because they have dirt on you; they are hoping to scare you into admitting something they don’t yet know. Don’t let the Feds or any other pigs intimidate you out of fighting back. Make good decisions, read up on security culture (read here or listen here ) and tech security precautions (here and here ) Remember that the communities that are safest from repression are the ones in which people communicate, support and treat each other well.

Don’t talk to the police ever!

“Many people who’ve been harassed by law enforcement officers report having been threatened with negative consequences should they choose to go public about the incident. This, like so much of what they’ll tell you, is utter and complete bullshit. YOU ARE NOT LEGALLY BOUND TO KEEP THEIR SECRETS, and the fact that they often lie and try to convince you that you are only speaks to the fact that doing so benefits them, while spreading the word benefits us. Part of their strategy for repressing dissent is to quietly isolate individuals from their communities and terrorize them into cooperating in their efforts. If we expose what they’re doing every time they do it, we strip them of the freedom and protection that secrecy offers- think of it as a little counter-counter-insurgency tactic.”
– From the EWOK zine