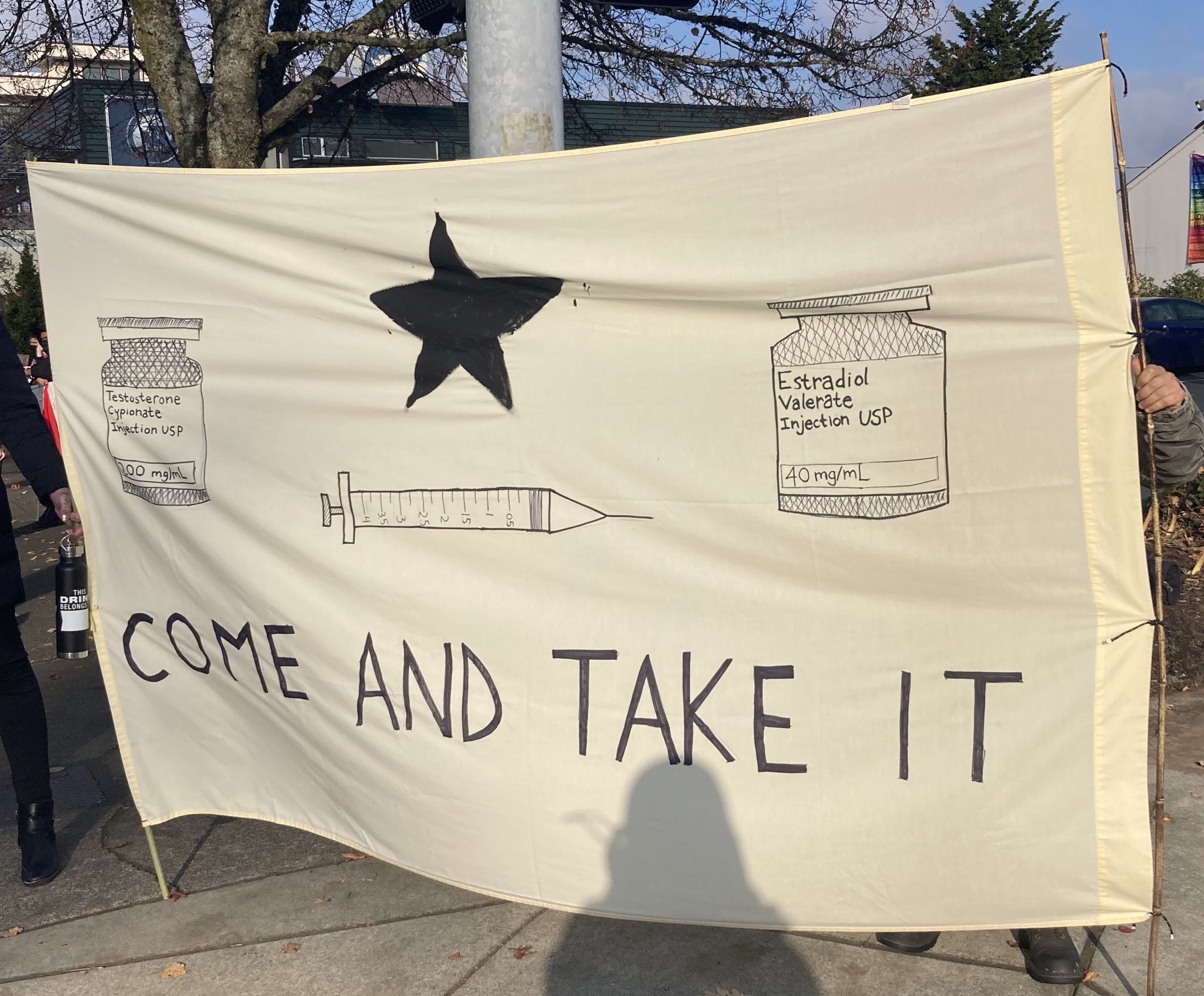 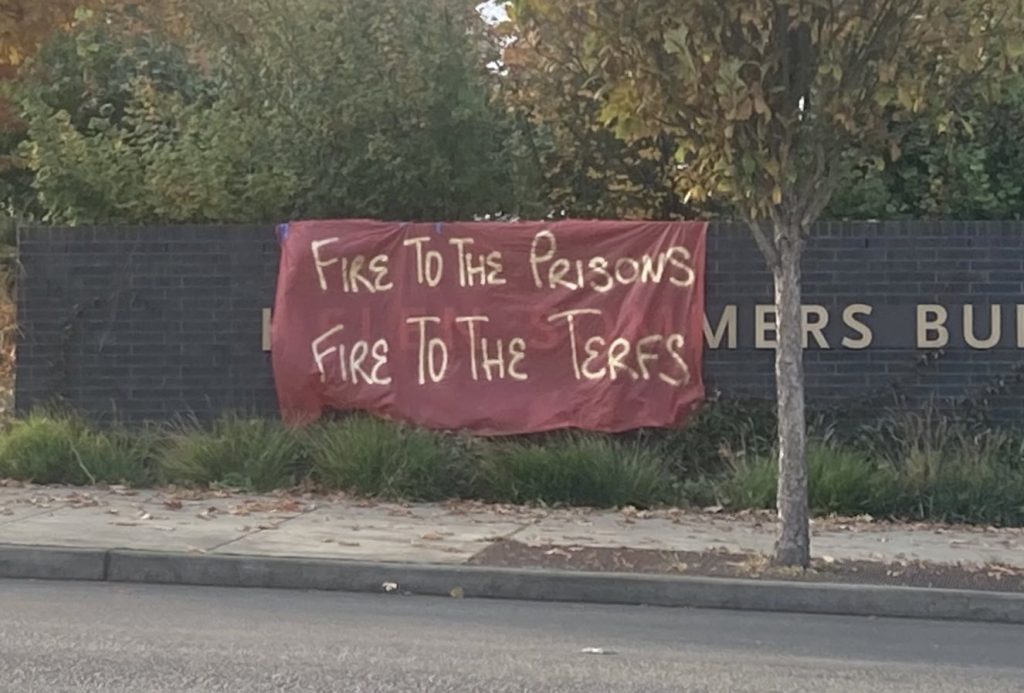 A planned anti-transgender rally in Olympia today was canceled at the last minute and moved to north Tacoma in the face of widespread opposition. “Sovereign Women Speak,” a marginal trans-exclusionary “feminist” organization with ties to Lierre “pied in the face” Keith (transphobic environmentalist cult leader and bestie of Derrick “badger sweater” Jensen), hosted a weekend retreat in Milton, Washington featuring chanting, dance, self-defense training, role playing, and nonviolent direct action training. The retreat was intended to culminate in a demonstration/speak-out at the state capitol in Olympia. Trans people and friends called for a counter event at the same time featuring free transgender burritos. Sovereign Women Speak perhaps remembered the time a member of Deep Green Resistance (Lierre Keith’s transphobic environmentalist cult) was hit with a burrito and the entire radical environmental movement finally cut ties with them, and canceled their Olympia event claiming the burrito feast was a “credible threat of violence.”

The burrito feast continued as planned in Olympia. We enjoyed our transgender burritos, listened to music, chatted with each other, and had a nice time knowing the TERF’s are on the retreat.

As trans people we are tired of having to show our victimhood by listing our resumes of experiences of gendered violence to prove our existence as non-threats to cisgender women, to prove that we deserve to use bathrooms without fear of assault, to play sports with our friends, to access life-saving medical care. As though “victim” is synonymous with pure and good. As though cisgender women are incapable of enacting abuse or patriarchy (what a joke to anyone who’s ever heard of Anita Bryant or grew up with an abusive mother). So rather than argue the case that trans women are in fact women (duh) and that everyone deserves the freedom to do what we will with our own bodies, we’re going to focus on some observations about contemporary TERF strategy.

Since the burrito incident in 2013, anti-trans “feminists” have become the pariah of broader queer, feminist, anarchist, environmental, and radical left movements. While they claim they have been marginalized and silenced by patriarchal men, the reality is that they have no allies in these movements because the anti-trans position is reactionary, outdated, and out of touch with reality. There is nothing feminist or liberatory about hatred of trans people. So the few anti-trans feminists who remain have made a devil’s bargain and joined forces with white nationalists and Christian fundamentalists. The anti-trans feminists don’t care that their new allies are also working to strip them of their reproductive rights and force them into servitude to their husbands, god, church, and state.

Locally, failed right-wing politician Candace Mercer jumped on the opportunity to stoke anti-trans hatred and heavily promoted the Sovereign Women Speak event. In turn, her Three Percenter buddies offered to do security. Another failed local politician, misogynist, conspiracy theorist and self-proclaimed anti-racism trainer for the Proud Boys Bruce Wilkinson voiced his support for the anti-trans event alongside calls to ban gender-affirming healthcare for anyone under the age of 25.

Nationally, anti-trans feminist groups like the Women’s Liberation Front partner with the Heritage Foundation to pass legislation that subjects children to genital inspections in order to play sports and rewrites history to erase the existence of trans people.

We must conclude that anti-trans feminists are in fact not at all feminists. Sovereign Women Speak and anti-trans feminists more generally obfuscate and ignore actual sources of patriarchal violence against women. Sexual violence is endemic in prisons and occurs primarily at the hands of guards (and not just male guards), yet Sovereign Women Speak advocates for “single sex prisons” as a feminist means to protect women. There is nothing feminist about prisons, and the end of prison rape requires the end of prison. Meghan Ventura, the self defense trainer for SWS’s weekend retreat, owns a martial arts academy in Port Angeles that offers a 10% discount to law enforcement, yet police frequently wield their power to sexually assault women in vulnerable positions and admit to committing domestic violence at a rate four times higher than the general population. There is no way to reconcile a pro-police or pro-prison position with feminism.

Without the Heritage Foundation and other large national right-wing think tanks, anti-trans feminists would have little to no power to pass legislation to forcibly detransition trans youth. Without Christian nationalist militia groups, anti-trans feminists have no power to hold a rally in Olympia. Sovereign Women Speak briefly attempted to distance themselves from local Three Percenters before canceling today’s event – without the Christian nationalists they have nothing.