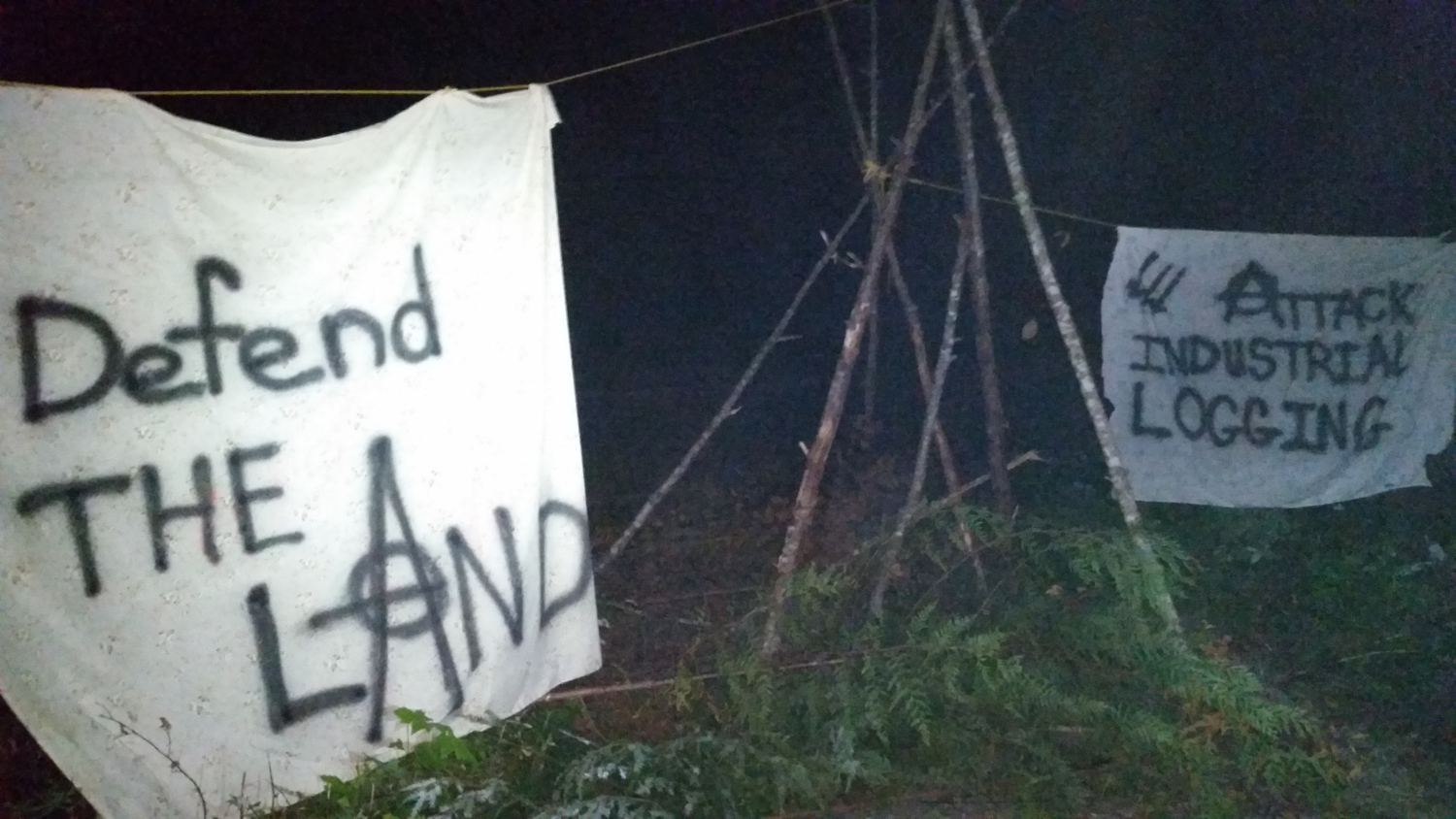 On a coast choked in smoke from fires burning a vast swath of this dying planet, up road TR11A on the north side of Edinburgh Mountain on so-called Vancouver Island, we felled seven trees across the road, erected tripods, hung banners, and locked a gate to block access to old growth cutblocks higher up the mountain. Blockades were started in August in the neighbouring Fairy Creek watershed, yet industrial logging in the area continues. Some old growth areas are currently inaccessible to industry thanks to these ongoing blockades, but many others nearby are still being destroyed, and our action prevented the Monday morning destruction of at least some old growth forest. We are happy to obstruct old growth logging, but we’d just as soon have done the same thing to prevent 2nd or 3rd growth forests from being clearcut, as there is nothing remotely sustainable about the way forests in so-called British Columbia are being industrially destroyed.

We invite others to expand the struggle against logging in Tree Farm License 46 along insurrectionary lines. The proposal is simple: informal organization, unmitigated hostility, and refusal to negotiate with the state or industry. This can be as simple as getting together with friends and creatively finding ways to throw sand in the cogs of industrial logging. In this case, for us it was establishing a temporary blockade. We did this because it was fun and easy, and we had no interest in getting caught or waiting to be arrested. We can act alone or in groups. The goal is one of direct action: to stop logging from happening, not politely ask that it stop. The more action is decentralized, the more uncontrollable it will be become, and since the powers that be are incapable of controlling the entire area, it may be possible to bring the clearcuts to an end. Worst case scenario we simply have some fun along the way, and cause them to think twice next time. Friends from afar can contribute to this struggle by visiting Teal Jones’ offices, mills, and other operations in various locations in so-called BC and the so-called United States.

Throughout this process it will be important to make space for a diversity of tactics. Some of us may try to build a popular social movement, some will stay on the barricades at the Fairy Creek blockades, others may take our approach and act autonomously – some may do all three. Whatever decisions we do make, we should approach them with humility. None of us know exactly how to stop the industrial Hydra, but we do know that the powers that be will employ divide and conquer tactics to single out more radical groups and individuals and weaken movements. A clear understanding of solidarity and remembering that we are all working towards the same goal will help us to succeed.

This feels particularly important seeing the Fairy Creek Blockade Facebook page denounce our blockade as ‘under-authorized’, as we believe none of us should look to anyone for authorization to act. Our actions come from our own analysis, desires and relationships – no one can take that away, nor should they invest in policing them. This can be complicated on stolen land, and to those who might raise this issue we would point out that there are Pacheedaht folks with us and Pacheedaht folks against us, as every community includes a diversity of perspectives. We wish to act alongside those who would see the forests on their land preserved, and not leave it to them alone to fight the industrial capitalism and colonialism which ceaselessly encroach upon us all.

For a diffusion of attack!