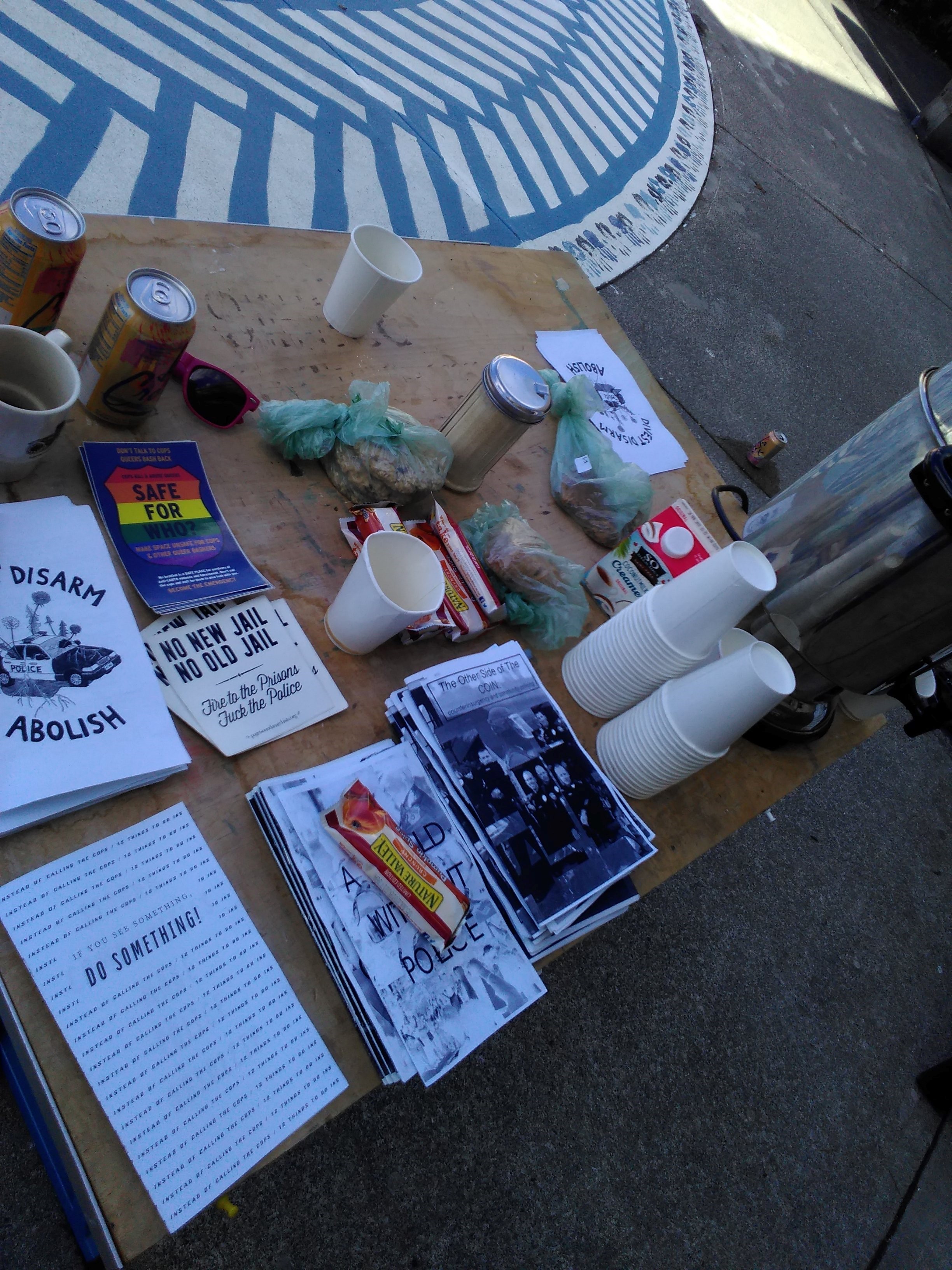 About a week ago we heard about a public forum put on by police to discuss “community safety” in regards to an increase in their budget, we decided to respond. We tabled under a sign saying, “coffee not cops” and passed out fliers, snacks and zines. We had some good conversations with people who expressed their distrust in community policing as well as some conversations with people who dismissed any critique of police as unrealistic.

Some would argue that it’s possible to reform the police 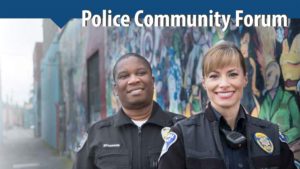 to be a benevolent social service tasked with menial community improvement roles. While we would love to see the police relegated to picking up poop off the ground, they will always use the power they gain from the, “social good” they do to oppress people and defend capital.

Steve “fight a bear” Hall, manager of city hall and infamous anti-homeless, pro-fracking bureaucrat, attended the event and was heckled by anarchists when he claimed that being against the police was a form of bigotry equivalent to racism or other forms of structural oppression.

Some of us went inside to listen to the police spout their nonsense. One of the concerning police projects we heard about is the formation a “crisis response team” based on the model of a Eugene-based organization called CAHOOTS, which serves as a crisis response organization outside of and completely distinct from the police.

The Olympia cops are trying to invoke the name and reputation of CAHOOTS (an autonomous group) to serve their despicable agenda in setting up their own top down, “crisis response” team, which we know would only continue to harm and criminalize people with substance use and mental health differences. We believe the cops are trying to recuperate and enact a “crisis response” team as a PR move after the police and paramedic perpetrated killing of Vaneesa Hopson. 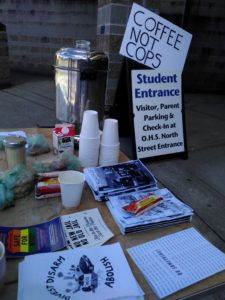 The Police already have a monopoly on force and want to expand that to a monopoly on safety generally. They want to control all the ways in which we support and care for each other by making sure every emergency gets channeled through the police. The need for autonomous crisis response is more important than ever and it is vital we set up our own ways to respond compassionately to even the most serious crisis without involving the police.

Every time the police visits a grade school and hands out sticker badges, or free bike helmets to kids they are building social power and legitimacy which they use to oppress those who are vulnerable.

Two separate people we talked to believed that the existence of an ancient alien conspiracy was more believable than a world without police. But the police are not a given they have not always existed and they can be destituted. Its necessary to both stand against the police in the streets as they wield their power through direct force as well as to oppose them when they build social power in public forums like this one. Events like Coffee not cops help fight the police’s claimed essential role in society.

Lets make interventions like this more common , and block the police on every front.

Here is the PDF to a newly formatted Zine about community policing. And below is the text to the flier we handed out inside and outside the forum.

“The Olympia Police Department is holding a community forum on
their public safety levy to pat themselves on the back for what they
have been doing, but we know that they deserve no congratulations for
the brutality and abuse they inflict on Olympia. The police do not keep
our communities safe. They did not keep Vaneesa Hopson safe when
she needed help, and then she was killed. They did not keep Andre or
Bryson safe by shooting them. They do not keep un-housed people
safe when they evict them from their camps in the middle of the night.
“Community policing” efforts like this forum often claim to be
progressive gestures at a kinder type of policing, but these attempts
have often been a smoke screen to hide an increasingly militaristic and
brutal reality.
Many people view blue lives as a protective force,
while many others who they oppress view them as an occupying force.
The police claim that they want to hear our feedback about their
programs, but what could we say to them? We don’t want police to
exist!
The feedback we have instead is aimed at our neighbors and friends.
● Don’t call the police
● Make police feel unwelcome in our neighborhoods
● Push to take guns away from the police and defund police
departments so they stop shooting people
To make this possible we must
● Build alternatives to the police to help keep people in our
community safe
● Address the causes of crime such as poverty and trauma
through mutual aid and health care
● Build customs and practices of mediation and restorative
justice autonomously so that harm and conflict can be
addressed rather than perpetuated.”