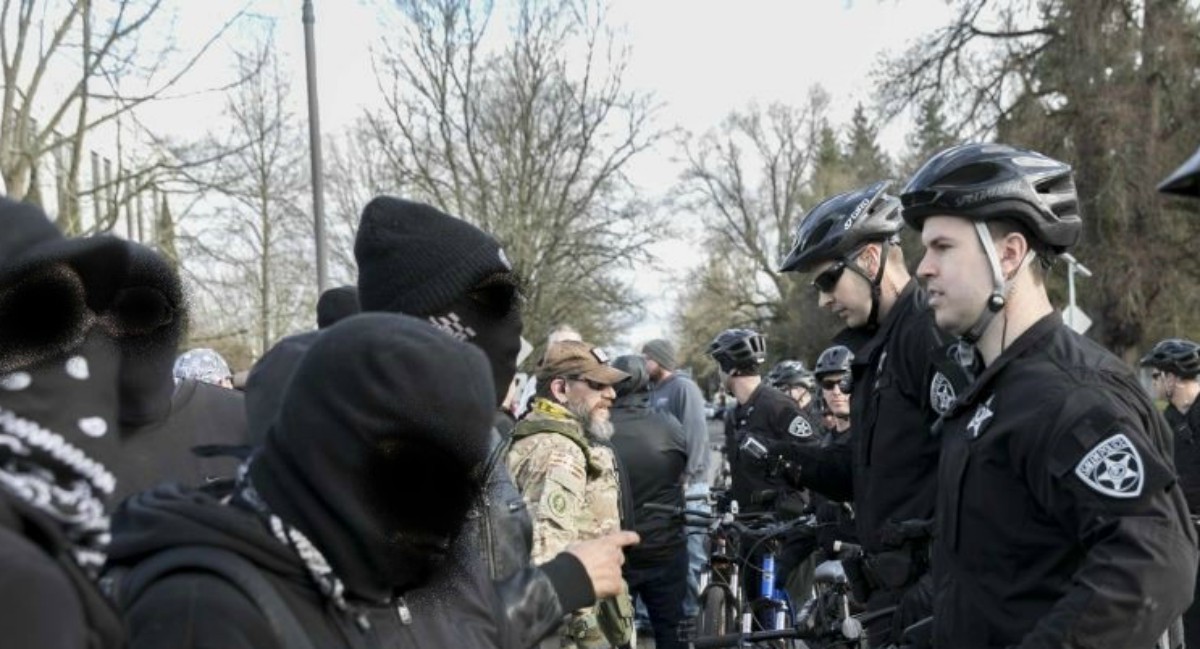 The following submission, is an anonymous report back on an antifascist mobilization in Salem, Oregon, against the ‘March 4 Trump’ rally, which in the past has brought together neo-Nazis, militia members, and Trump supporters.

Comrades from all over Oregon converged on Salem, Oregon this past Sunday to shut down the planned “March 4 Trump” rally. Memories of the last such rally, in Lake Oswego, OR, were still on everyone’s minds. In the days leading up to the rally, the Vancouver, WA based Patriot Prayer continued their typical feeble attempt to sow confusion by announcing a rally in Vancouver then changing the location to the already planned rally in Salem then completely bailing altogether.

This tactic has been on display since Patriot Prayer mouthpiece Joey Gibson got the Berkeley treatment over the summer, resulting in multiple planned-then-cancelled rallies and general chaos amongst the fashy and Alt-Lite ranks in the Bay Area. According to the Facebook event page, only 300 people said they would be attending the “March 4 Trump” rally, and in reality any event organizer is lucky if a third of their online RSVPs show up. This decline in turnout has been an ongoing trend, as folx in the Northwest have kept the pressure up on anyone still dumb enough to openly align themselves with any known Alt-Lite or fashy groups operating in the region.

Several banners were dropped along the southbound interstates between Portland and Salem, a rallying cry for our side and a warning for theirs. In Salem, counter-protesters, bloced and otherwise, showed up early and occupied the capitol steps (the intended location of the rally) before participants arrived. Their efforts were aided undoubtedly by a last minute event time change from 12 to 2, giving everyone that much more time to show up en masse.

Eventually, a small group of pro-Trumpers and III%ers appeared, joined by the Hell Shaking Preachers. Counter-protesters easily outnumbered them 2 to 1, if not 3 to 1. Armed with PA systems, several drums, and the voices of over 150, the counter-protesters easily drowned out any speakers at the rally. Eventually, rally goers gave up and appeared ready to leave altogether. A great cheer went up, and folx began congratulating themselves. While quite a few folx from the pro-Trump side did leave the area, unfortunately so did a lot of more mainstream counter-protesters. Luckily, most folx in bloc stuck around, waiting to make sure the rally was successfully ended before celebrating a victory. A small group of Hell Shaking Preachers and III%ers entered into a stand off/shouting match with the bloc.

Eventually, talk of a march began to circulate and the pro-Trumpers attempted a feeble march through downtown Salem. At this point, Salem’s pathetic police attempted to separate the two groups with bike cops. The utter lack of cohesion and effectiveness among the few police officers present is almost laughable. When a bike cop attempted to form a barrier in front of the bloc, anarchists just went around. This continued, with police officers regularly finding themselves surrounded by the bloc. The pro-Trump group sped up their pace, attempting to distance themselves from the bloc, but at every turn we were right behind and many comrades were even walking besides their group, taunting pro-Trumpers and police alike.  As the “march,” if you want to call it that, began it’s return to the capitol steps, a scuffle broke out and ended with a comrade being arrested and carted away.

The two groups found themselves in another stand off, with the pro-Trumpers attempting to stage some weird photo op on the capitol steps. Comrades quickly lifted an antifa banner to cover their Trump one. This little stunt so enraged one particular participant that he attempted to rip it in half and steal the banner. While he tripped and fell up the steps, a big brawl broke out. A pro-Trumper wielding a guitar overhead was met with a fist to the face, a few cops got sucker-punched, and two comrades were snatched up before the police could get the two groups separated. Police attempted to form a barricade keeping us separated while the pro-Trumpers made their retreat. Comrades simply walked to the right of the police barricade until they were once again face-to-face with the pro-Trumpers.

At this point, they gave up and attempted to leave, while the bloc gave chase. The cops were finally successful in blocking our path, so we went around the building to again confront the few remaining pro-Trumpers who hadn’t made a hasty retreat. When we caught up with them, they were quickly making for their vehicles in two separate parking lots. Unfortunately for them, their plan of parking far away and walking in didn’t stop someone from locating their vehicles. As one final “fuck you” from us, they returned to their vehicles to find that someone had dumped paint thinner all over them.

In conclusion, anarchists and antifa in the Northwest continue to successfully utilize these pro-Trump rallies as opportunities to inflict large amounts of damage upon those who use Trump as a blanket for fascistic and racist organizing. In one-to-one stand offs in the streets the police are always going to side with the Right, so we’ve learned to act more covertly. These acts of sabotage have massive demoralizing effects on the enemy, especially in conjunction with the regular doxxing of individuals. We must continue to confront these people in the streets so that they cannot further organize, but that is not how we win this fight. Rather, it is the diversion for our real warfare.