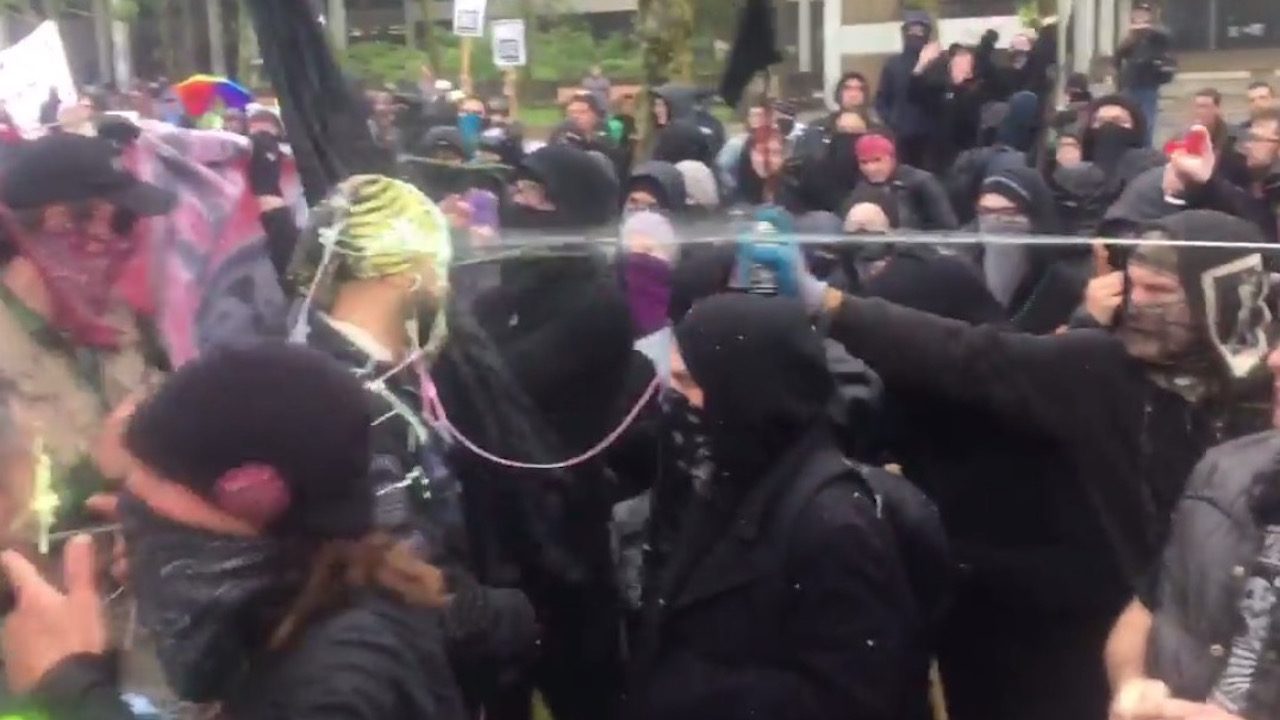 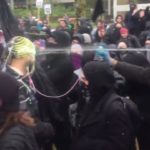 On Thursday, June 15th, Patriot Prayer came to evergreen to hold a “free speech” rally in response to protests against white supremacy on campus.

A Few Words About Patriot Prayer

Patriot Prayer is a violent, ultra-nationalist, fanatical protestant group that while not explicitly fascist or white supremacist themselves, have no problem sharing space and a platform with out and out neo-nazis, alt-righters, and various stripes of white nationalists(http://rosecityantifa.org/articles/warriors-for-freedom/). Of course, barring all of that, we think just on the basis of their active hostility and calling for violence against anyone perceived as left as well as their ultra-nationalism is enough to warrant a militant anti-fascist response. Nationalism is the natural breeding ground for fascism and white supremacy.

One interesting thing about Patriot Prayer is that many of their members are people of color, and they try to capitalize off this to deflect accusations of racism and supporting white supremacy. We think it’s absolutely crucial to remind people that people of color absolutely can and will internalize and side with white supremacy. From the black neo-nazi cab driver who tried to infiltrate Philly Antifa(https://phillyantifa.noblogs.org/post/2016/05/03/nazi-cabbie-gabriel-diaz-caught-attempting-to-infiltrate-antifa/) to fascists like Sheriff David Clarke (and every black cop). This is a phenomenon that exists in all oppressed and colonized peoples and can be seen as far back as slavery with the house saves that sided with their masters and sold out those struggling for freedom.

Patriot Prayer was expected to be at red square at 5:30, most people started gathering at 4. The contingent of students and faculty of Evergreen held space in the covered area in front of the libraries with signs saying ‘Black Lives Matter’ and ‘Community Love’ which was a slogan of the student protests. The militant anti-fascist bloc mingled in the same area, there was a re-enforced banner that read ‘America Was Never Great’ and another banner which read ‘No Platform for Fascists’. People were handing out noise makers and snacks as we waited for Patriot Prayer to arrive.

Across the way the police were getting in formation. There was around 50 Washington State Patrol officers in full riot gear in between 2 lines of metal barriers. There were at least 20 other fully geared up WSP hanging around the back of the Police Services building, and around 20 Thurston County Sheriffs. A small group of alt-right kids stood off to the side filming the crowd and they were confronted by a small crowd. They were mocked (one of them had a really stupid hair cut that was greasy as fuck), silly stringed, and peopled used the re-enforced banners to push them away. The police didn’t seem to care.

It wasn’t till 6:30 ish that patriot prayer and their fashy fans arrived waving the usual arrangement of american flags, don’t tread on me flags, and a pepe flag. A confrontation pretty immediately ensued between the two groups. Patriot Prayer and the fash got plenty of silly string and air horns blown in their ears, Joey Gibson got it particularly bad by getting glittered, having something thrown at him slicing open his face, and allegedly getting pepper sprayed. Talk shit, get hit, Jojo. One of their particularly violent members, Tiny, who likes to rant online about how much he wants and loves to attack people, took down a comrade for allegedly brandishing a knife. There is video of the whole take down but no knife to be seen, not that we care if someone had a knife or not. After taking this person down they delivered them to the police to be the only arrestee of the day. Far-right collusion with the state, who’da thunk?

After all the commotion the police separated the two groups and the rest of the day was just a shouting match, though we had a loud ass sound system on our side which drowned them out. We spent the rest of the time mocking them, one person in particular was singled out, a biker who some of us knew from a previous action in Vancouver Washington who cried like a baby when someone touched his bike. We told him about how we were gonna put our grubby hands all over his bike and he looked a little upset. Boo hoo.

After their rally ended with a whimper we later learned that some comrades had snuck off and slashed some of their tires(https://pugetsoundanarchists.org/clandestine-tactics-for-free-speech-demos/). Much love to the Autonomous Cell of Vehicular Disrepair!

One thing that we think is absolutely crucial to bring up, and this applies to many recent anti-fascist actions all over, is the ignoring of the police infavor of the out and out fascists and white nationalists. There’s something to be said for choosing our battles wisely, no doubt, but we must never lose sight of our bigger goals, or bigger enemies. The truth of the matter is that every confrontation with fascists is also a confrontation with the police, they will protect them every time and we need to prepare accordingly.

More than that, however, is that the police are the pillars of white supremacy. The insurgent far-right could only in it’s wildest dreams exert the same levels of white supremacist violence on us that the police exert every day. To fight fascism, to fight white supremacy, we must fight the police. There is no way around it, only through it. We’d like to bring back the words from the reflections on the Smash the Hammerskins action in Seattle from back in 2015(https://itsgoingdown.org/reflections-smash-hammerskins-march-greater-implications/), as we feel the analysis holds up.

Hostility toward the police took a backseat to the Nazi threat. There was a bottle or insult thrown here and there but largely the crowd would not confront them. This was a dilemma. We had assembled this huge force of potentially liberatory violence and yet these enemies were hardly threatened at all. Was this restraint necessary?

Having attention detracted from attacking our enemies at hand, seems like a way that the far-right (sanctioned or not) acts in the interest of reinforcing the status-quo. They redirect revolutionary momentum into defensive activities. By representing the worst possible outcome of what a destabilization of the present order could result in (fascism), they terrify potential insurgents into resigned acceptance of the comparative security of the democratic state.

We should aim to be militantly anti-fascist while not allowing that to imply that we are pro-democracy. Anti-fascism is the lowest common denominator that brought us together that night but we should work to show that the racist authoritarianism Nazis represent is not only a fascist phenomenon but also a pillar of our capitalist democracy.

We think going the rout of mockery was a good call for this action, many of us were skeptical at first but it was fun as fuck and they definitely didn’t enjoy it. As it turned out, this was also a lot of peoples first action like this, there were a lot of beautiful, new faces (that we couldn’t see because they were masked up) and we think that is fantastic! We welcome you all with open arms and hope to see you in the streets again!

There were many times we noticed area where the police thinned out and our crowed could have easily broken their line. When we approached people with this idea many were hesitant and it didn’t end up happening. That’s understandable, but if we are going to fight the fascists, we must also fight the police. Especially now when the insurgent far right is making such a strong push for the west coast and we are frankly behind. Just in Olympia the far right has been able to hold space in ways they weren’t able to before. It’s time we get our game face on and prepare for the coming battles.

And remember, anti-fascism is useless when not approached as part of a greater revolutionary project.

DEATH TO THE FASCIST INSECT