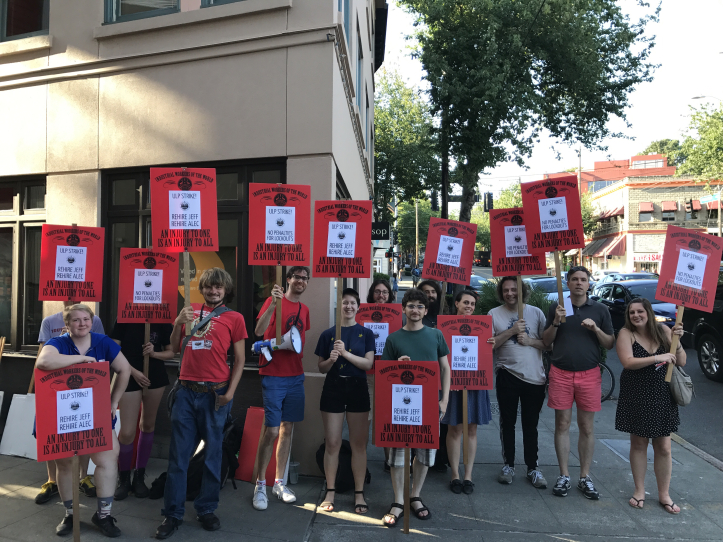 Grassroots Campaigns, Inc. (GCI) is a nationwide, for-profit canvassing contractor which fundraises for progressive nonprofits. GCI canvassers can be seen on countless street corners in large cities and college towns, talking to folks about groups like Planned Parenthood, the ACLU, and Doctors Without Borders. Despite the company’s claims of a “progressive” platform, its record of worker abuse and union busting is extensive.

For several years now, GCI workers have attempted to organize with the Industrial Workers of the World (IWW). Building interest  has not been too much of a challenge, since idealistic folks get recruited for “organizing” and “activist” jobs, but soon find that miserable conditions lead to high turnover rates. New hires are often sympathetic to any drive to bring about change.

The larger hurdle in the past has been how to navigate GCI’s blatant disregard for labor law and the challenges of keeping a campaign going in the face of constant attrition. Past drives in Portland and Ann Arbor laid some of the groundwork for how to organize, but ultimately fell short of their goals and provided valuable insight into the company’s strategies.

The current campaign, originating in Seattle, has thus far been the most successful. Although workers there have faced countless abuses since going public in February, they have managed to expand the public presence of their IWW IU650 campaign to New Orleans and wider, while building out a network of support and solidarity across the country. A number of small victories so far, such as a $2/hr raise in New Orleans and the resignation of several abusive corporate-installed managers in Seattle, have fueled this rise.

GCI has not made the task of organizing easy. For a week-and-a-half in June, the company illegally locked out its Seattle office in retaliation for a union action demanding better training and onboarding for new hires. The lockout was broken through nationwide direct action and legal threats, but since reopening the company has waged an all-out war on its workers. Workers around the country have been faced with direct sabotage by the company and numerous illegal unilateral changes to working conditions. To top it all off, three workers in different cities were illegally fired in July amidst a cloud of blatant lies and deceptions from the company.

With this latest attack, GCI workers across the country were forced to fight back. On Friday, July 27, Seattle IU650 members kicked things off with a Strike against the company’s unfair labor practices. In seven other cities, actions took place aimed at building the union’s shop-floor presence and forcing the company to do right.

IU650 members are united in demanding the rehiring of all those impacted by the company’s illegal union busting, improvements to the company’s harsh quota system, and protections in the case of bad weather, street harassment, and other issues that might force canvassers to drop shifts. In addition, they are working to fight unique local challenges ranging from lockouts to laundry.

The latest wave of upheaval at GCI kicked off in Seattle last Friday, July 20. Widespread frustration with the company’s constant illegal, unilateral changes in working conditions and policies led IWW IU650 workers there to assert their right to work under their previous conditions until the company was willing to bargain over them. This came shortly after GCI fired a beloved union member using outright lies and changed conditions. When the union attempted to restore previous practices like staff members, rather than managers, running trainings and orientations, the company responded with a second, shorter illegal lockout. Workers were notified that that evening and the office reopened the following Wednesday.

Faced with sabotage by their bosses, illegal firings, and yet another new manager, Seattle wobblies struck back. On Friday, July 27, the workers of Seattle GCI went on strike. They held down picket lines in the morning and afternoon. Fifteen workers and supporters confronted the boss in the morning, while not one worker at the shop scabbed, and only the company’s new manager crossed the picket line. In the evening evening twenty folks gathered for a community-facing picket, and some had the opportunity to speak to unsuspecting people arriving for earlier scheduled interviews at the company.

The Seattle “Unfair Labor Practices” strike sought to protect workers from the company’s now regular illegal lockouts, to end unilateral changes in working conditions, and to rehire Jeff, a beloved canvasser who was forced out via outright lies. The company was notified the evening of Sunday, July 29 of the end to the strike, although further action will certainly come.

New Orleans IWW members at the local GCI office have faced severe illegal union busting since they went public in May. Directors have had free reign in everything from buying votes in exchange for promotions to socially isolating union members. Working in the South has meant that even the meagre protections labor law occasionally offers hardly apply. Yet the struggle has persisted in the company’s most profitable office.

After one of the most visible union members was fired by the company for violating an alleged policy that had never been enforced or even mentioned, New Orleans workers drew a line in the sand. They marched on their bosses to deliver a demand Friday echoing the nationwide call for rehiring of fired canvassers and for quota reform. They also added a local demand that directors not hold people’s review status as a secret. Canvassers are supposed to be notified at the end of their week whether or not they’ve met the fundraising quota, yet this reasonable expectation often falls by the wayside in New Orleans. Workers there are lucky to get told they face possible termination more than a couple days before the deadline.

Grassroots Campaigns Inc.’s corporate headquarters is in a fancy office building not too far from Boston’s South Station. From this center of operations the company’s executives do the messy and highly profitable work of a modern day job shark, disguised under a “progressive” veneer.

The Boston IWW General Membership Branch made sure on Friday that they had to at least encounter the grievances of the workers they exploit face to face. A member of the branch was able to deliver a demand letter to the company in the middle of their weekly “free food friday.” 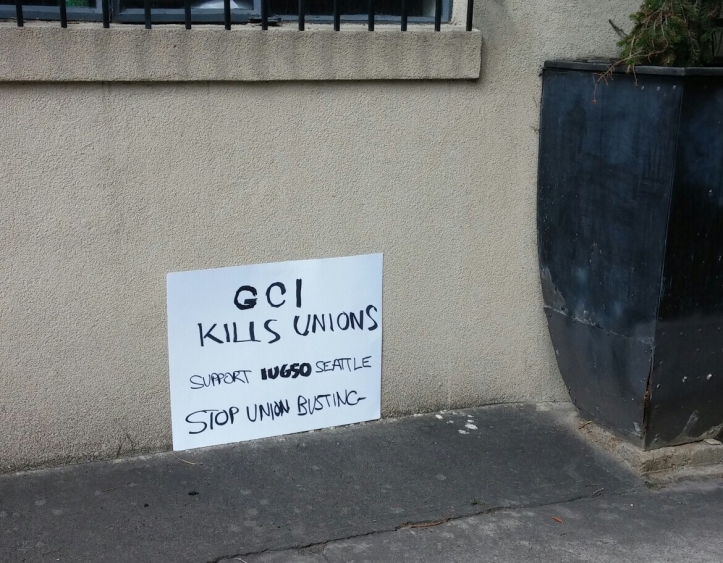 In Denver a local Wobbly held down a picket outside of the office, only to be confronted by the director claiming that the sidewalk was “private property.” Given that GCI runs on the principle that “sidewalks are valid places for civic engagement,” this assertion was hypocrisy bordering on hilarity. The director went so far as to call the police, but when they arrived they too saw the absurdity of the situation and promptly left. 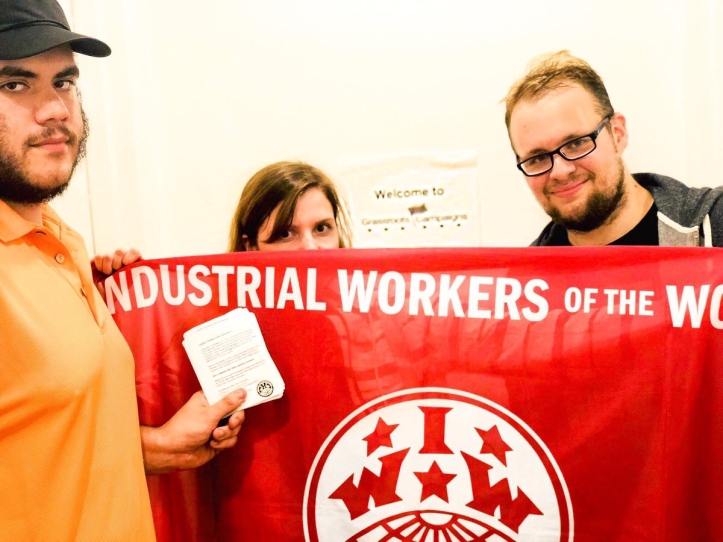 Outside the GCI office in Los Angeles, posters went up in the middle of the day on Friday in solidarity with the Seattle strike and with workers taking action in other cities.