Thanks to a combination of tips from local community members and Unicorn Riot’s publication of the “Vibrant Diversity” logs, Rose City Antifa has been able to identify yet another neo-Nazi contributor to the Alt-Right fascist cultural insurgency which has been emboldened by the Trump candidacy and presidency. After years of Nazi activity including a history of involvement with NSM, Kenneth Stephen Hart aka Hand-Banana spent the past several years living between Vancouver, WA and Lake Oswego, OR while producing and being interviewed on countless Alt-Right and neo-Nazi podcasts. He also engaged in white supremacist organizing with the neo-Nazi “True Cascadia,” known for their obnoxious racist posters, doxxed former members, and snobbish reputation among other regional neo-Nazi groups. On top of being a committed neo-Nazi, Hart is also a vicious domestic abuser, and is currently incarcerated after having been convicted on charges of domestic violence against a former partner.

During the years leading up to the neo-Nazi Alt-Right movement’s appearance in mainstream American consciousness, its architects embraced podcasting as a medium to elaborate and disseminate contemporary versions of fascist and Nazi politics that would resonate with other internet racists and misogynists. In the Vibrant Diversity chat logs, Ken Hart takes credit for producing and contributing to at least six Alt-Right podcasts, several of them affilated with the popular neo-Nazi website The Right Stuff founded by Mike Peinovich (aka Mike Enoch) in 2012.

The Krypto Report is hosted by 51 year old Nazi shit-poster Robert ‘Azzmador’ Ray. Ray is a frequent Daily Stormer contributor and acted as his employer Andrew Anglin’s mouthpiece at a dimly lit Unite the Right afterparty in Charlottesville. The podcast features interviews with alt-right personalities who have similar genocidal politics and follower counts on the failing social media website GAB.ai. While Ray describes his politics as “GTKRWN (gas the k**es, race war now) all the way”, he also attempts to present himself as a staid and pragmatic member of the alt-right due to his confidence in the strategic efficacy of electoral politics. 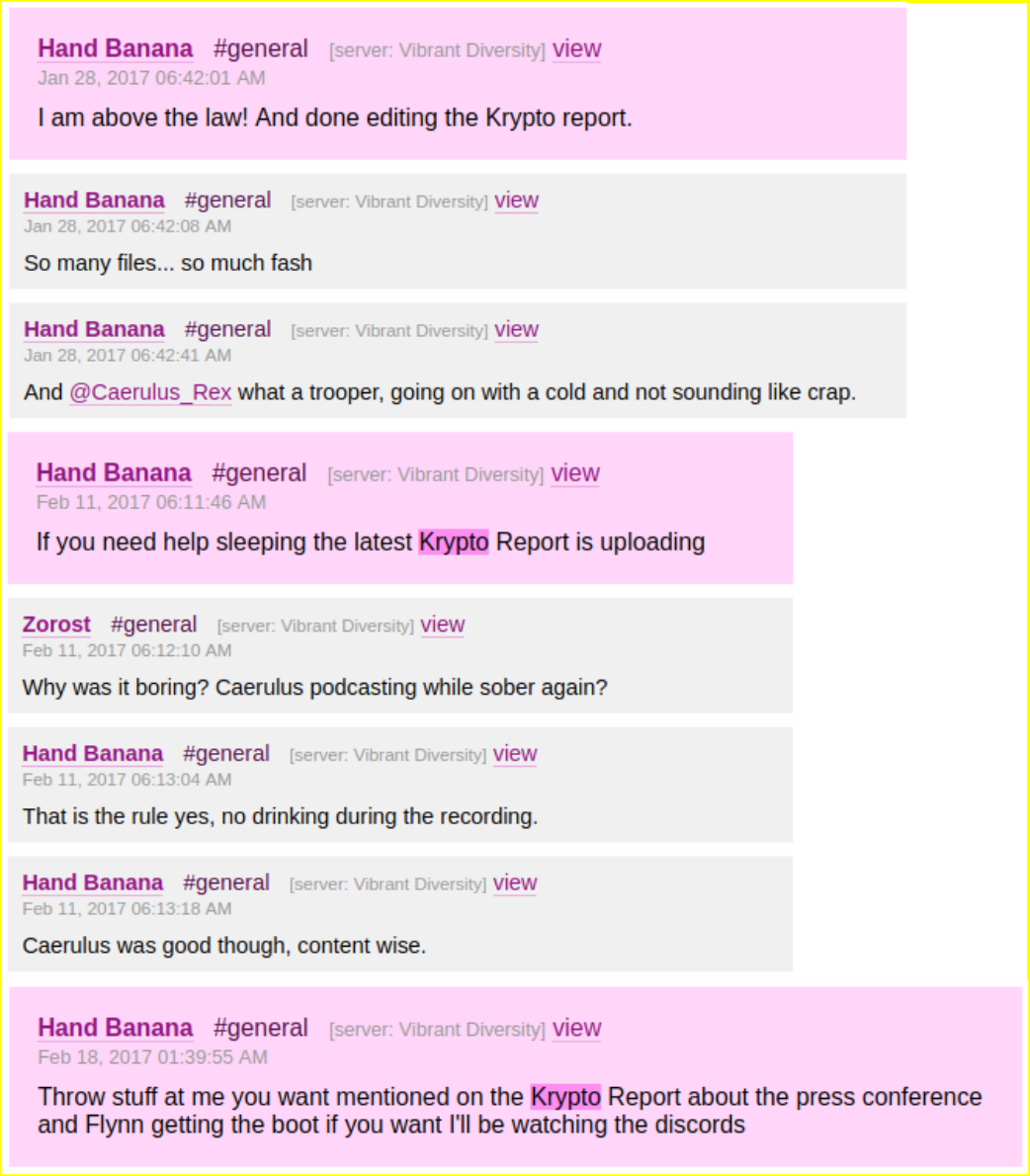 Ken Hart brags about producing the Krypto Report podcast. Brian Brathovd aka Caerulus Rex is also frequently mentioned as a contributor to this podcast.

The Northwest Imperative Podcast was dedicated to promoting the popular white nationalist scheme to create a homeland for white people in the Cascadia bio-region of Pacific Northwest. With the exception of an idiosyncratic emphasis on denigrating the urban left in Seattle and Portland, the ideology espoused on the podcast differs little from conventional alt-right white nationalism. It was hosted by someone using the pseudonym Dark Enlightenment and co-hosted by another fascist called J. Fairwater. 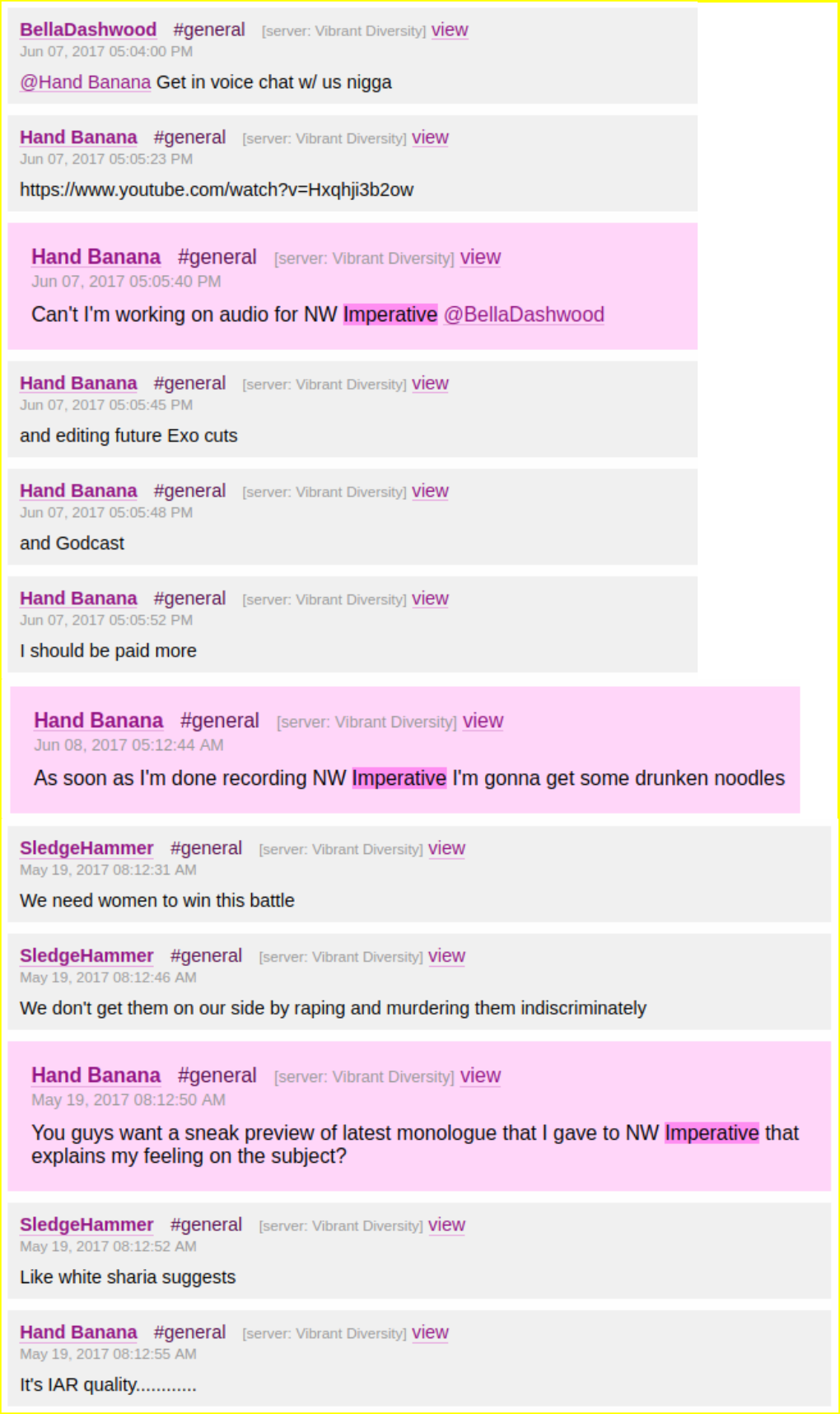 Fatherland leans hard into rancid patriarchal topics, with a particular focus on heteronormative family structure and sour anti-semitism. Host Jim Flanders’ target audience is the “alt-right dad,” with a patronizing tone that attempts to both soften the image of the alt-right father figure while lashing out at marginalized groups for perverting the natural order of patriarchy. Fortunately, YouTube has jettisoned the podcast, although it remains hosted elsewhere on the internet. 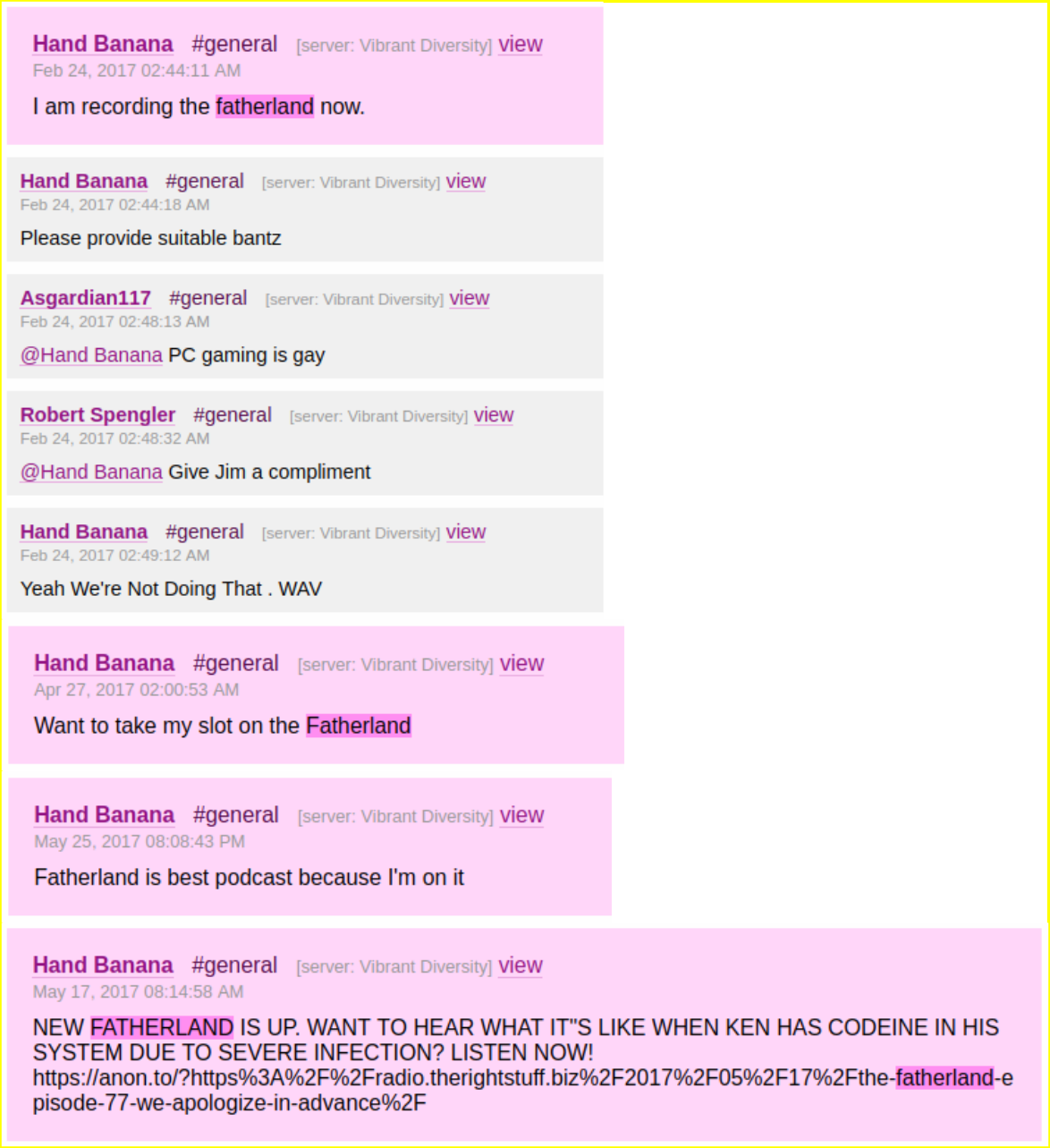 Exodus Americanus purports to be a podcast for “men amongst the ruins” that (echoing the implicitly white nationalist rhetoric of the Proud Boys hate group) “looks [its listeners] dead in the eye and proclaim[s] that WESTERN CIVILIZATION is the light of the world and needs to be preserved, at all costs.” To that end, the show features episodes with titles such as “N***ers All the Way Down,” and rants by neo-Nazis such as Christopher Cantwell saying “I’m not even a Hitlerite but I’m like, ‘Okay, let’s fucking gas the k*kes and have a race war,‘” all facilitated by neo-Nazi co-hosts “Roscoe Jones” and “Matty Midwest.” 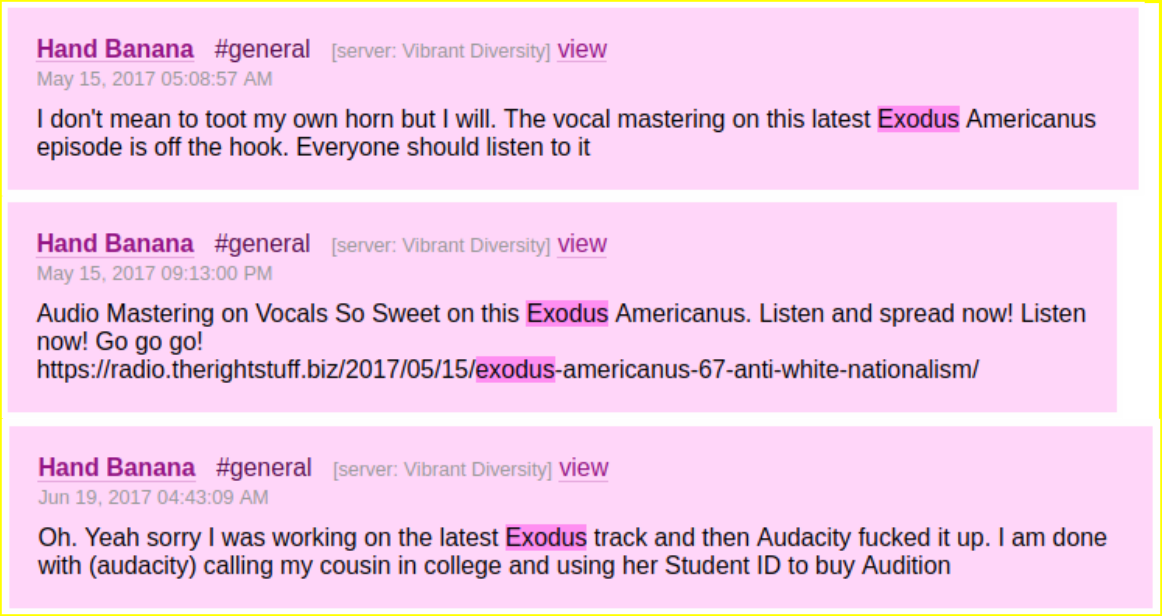 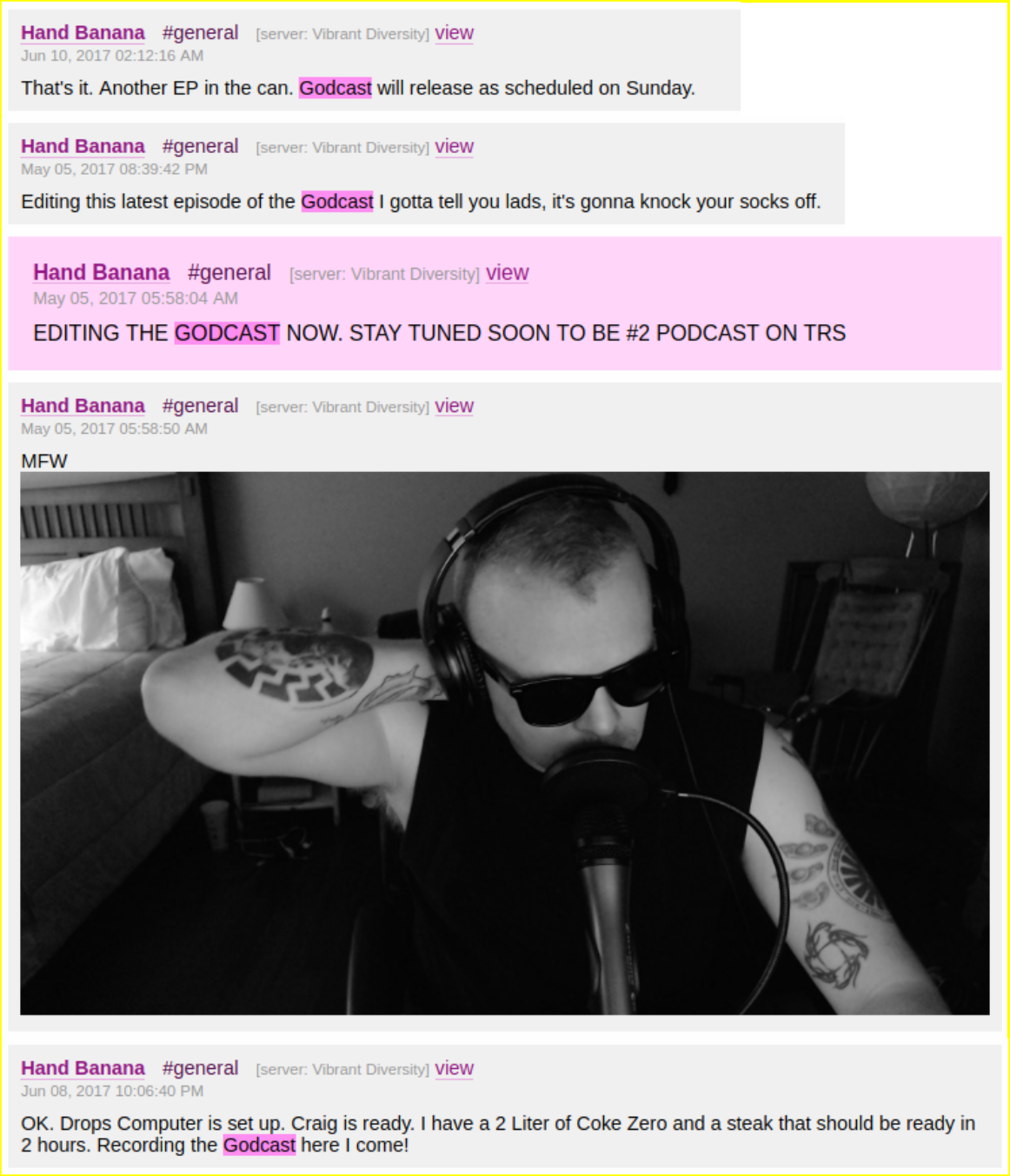 The Intersectional Alt-Right began as a google hangout called Friday Night Alt-Right Fights, hosted by Hart and fellow Vibrant Diversity Discord chat member “D’Marcus Liebowitz.” After releasing many hours of freeform rambling, episodes took on the familiar structure of a political comedy podcast. If its politics are distinguished significantly from other fascists podcasts, it’s by an excessive confidence that the alt-right will never stop winning. The final episode featured an interview with Richard Spencer. 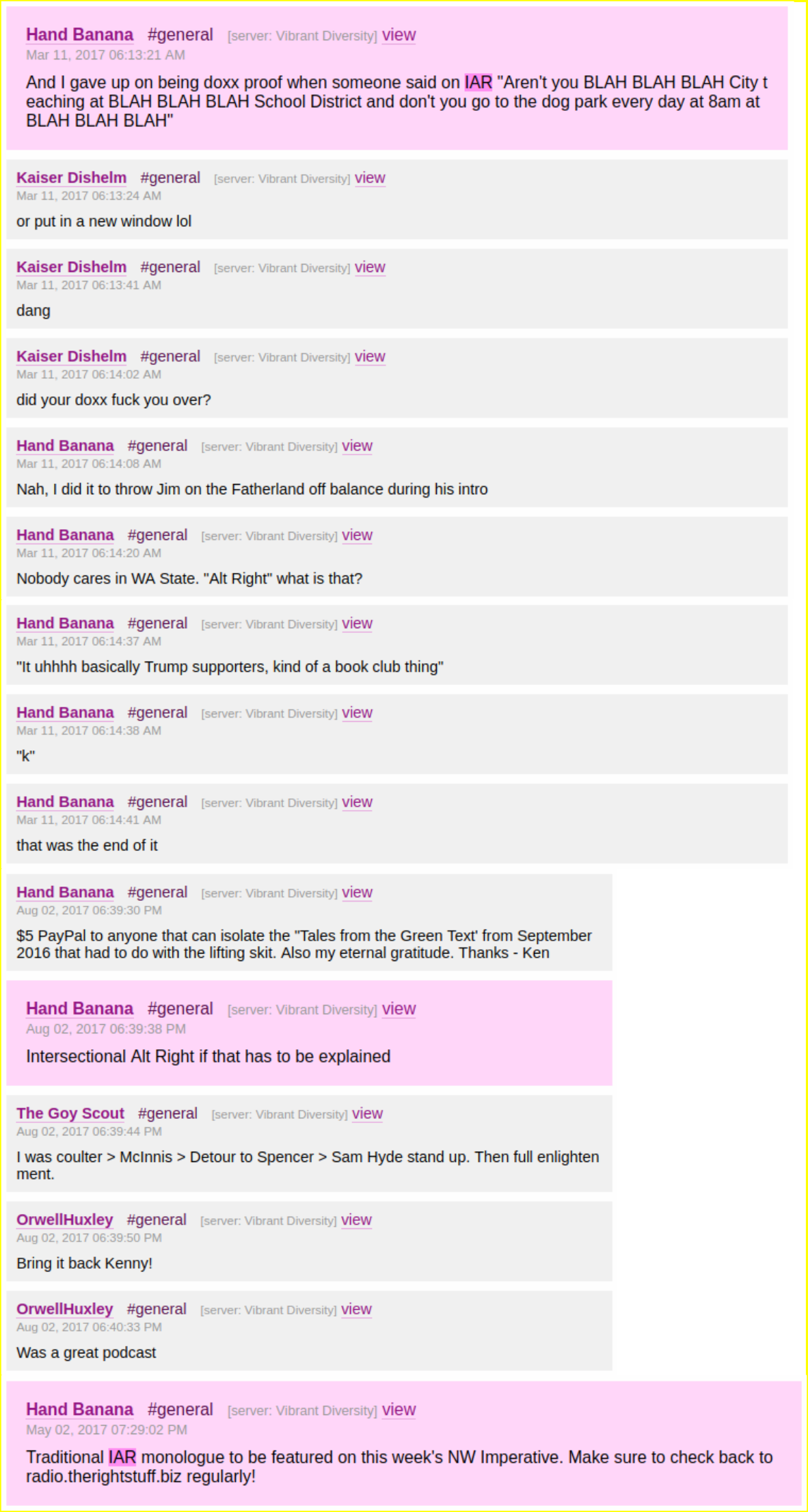 Rose City Antifa and our regional comrades have had multiple occasions to write about a white supremacist organization called “True Cascadia,” which first appeared in the Pacific Northwest in 2016. True Cascadia has put up white supremacist propaganda and harassed schoolchildren in Portland. 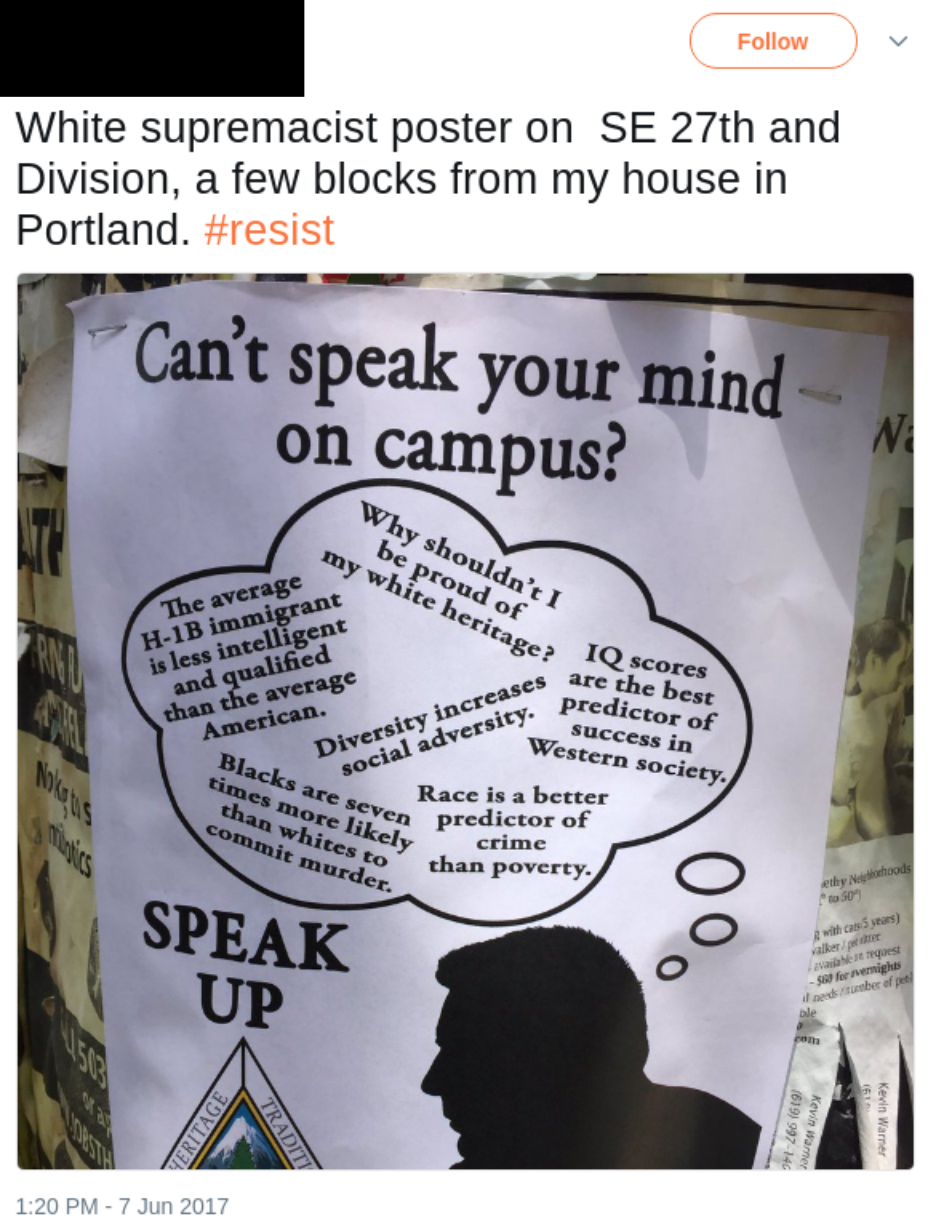 On June 7, 2017, True Cascadia flyers are found in Southeast Portland. 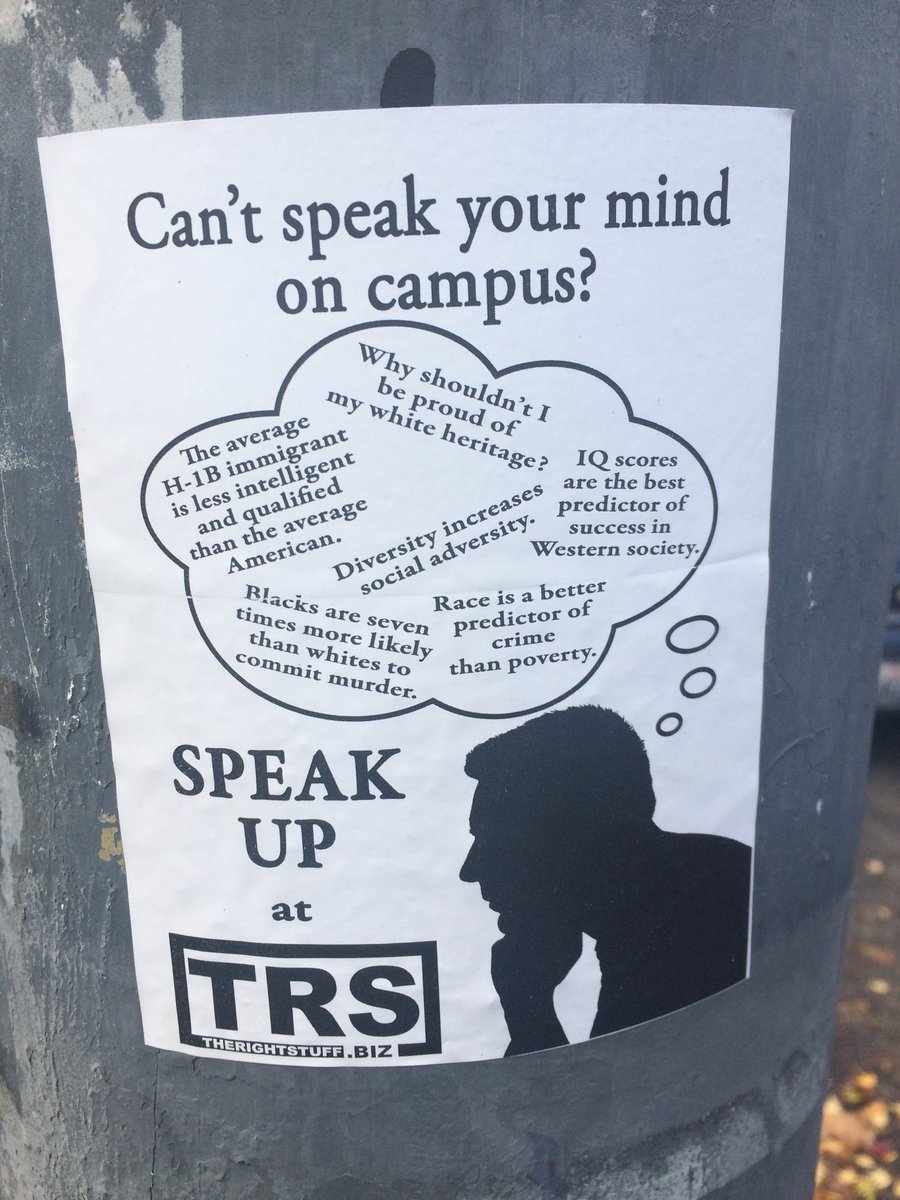 on June 9, 2017, flyers for The Right Stuff neo-Nazi website with an identical design to True Cascadia’s posters are found near the site of an incident wherein middle-school children were subjected to racist harassment. Posters with True Cascadia branding were also found in the neighborhood.

Ken Hart’s contributions to the Vibrant Diversity discord logs indicate that he also was affiliated with True Cascadia. 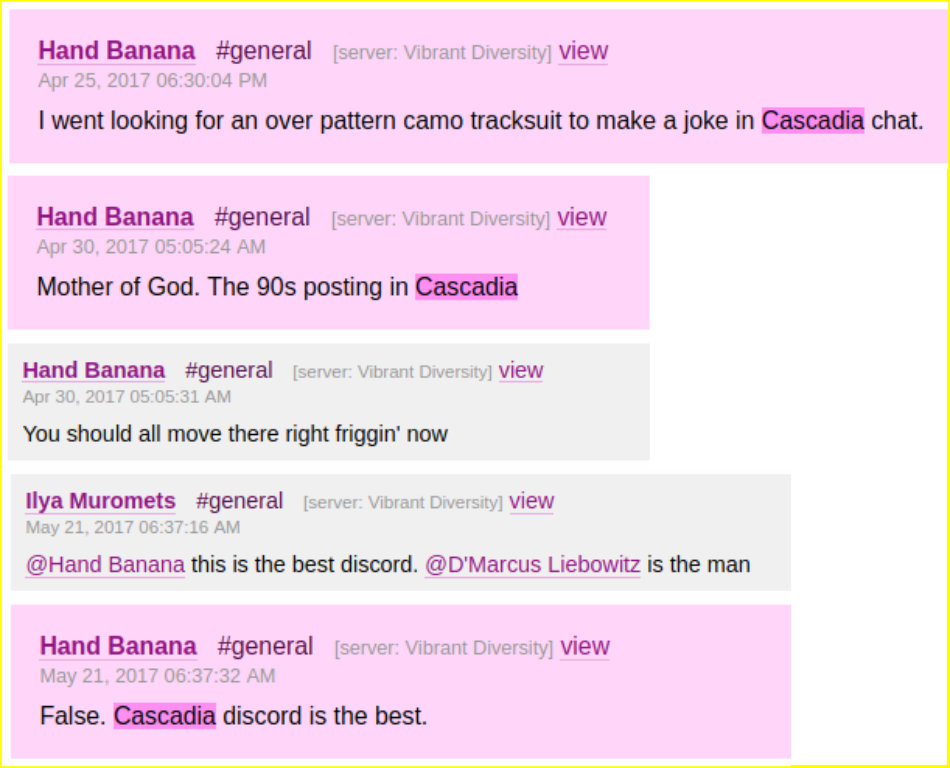 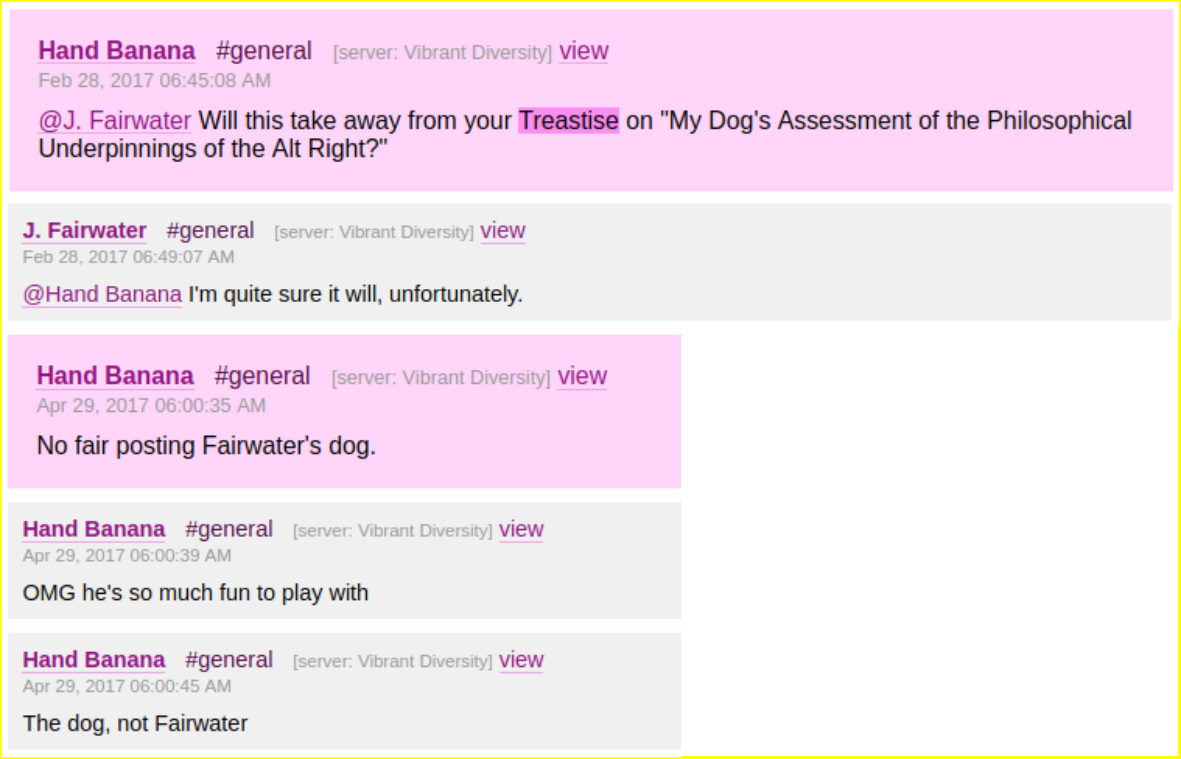 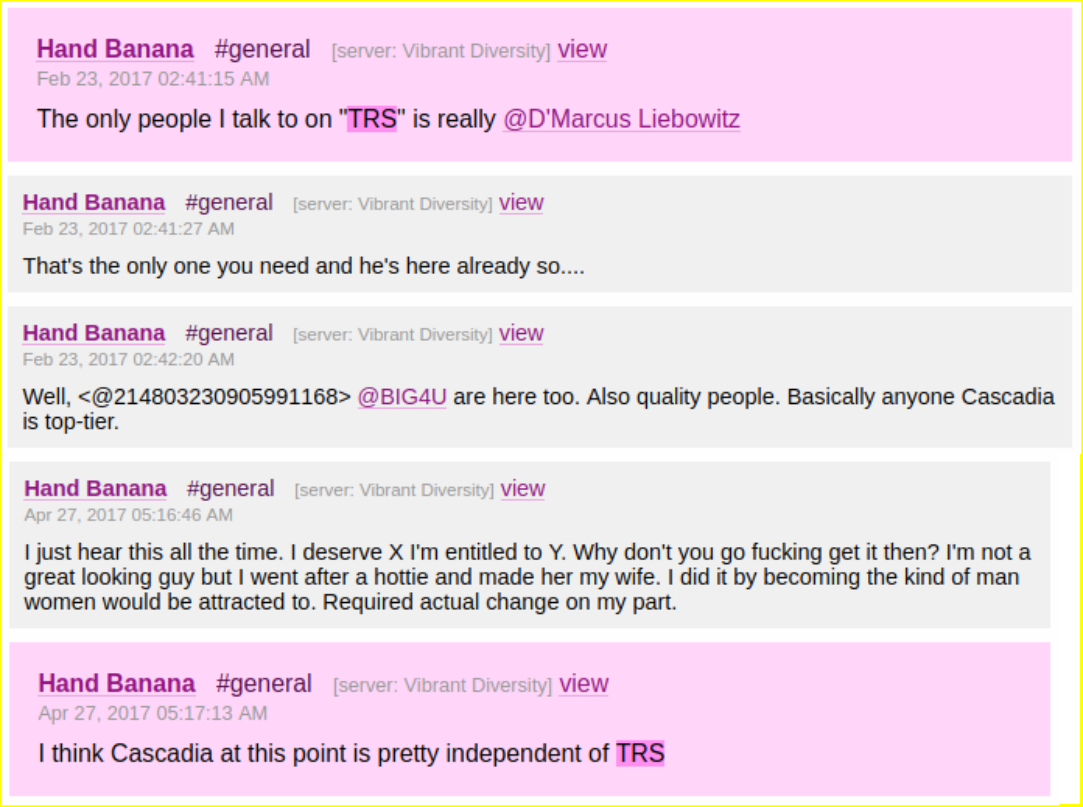 In multiple posts, Ken Hart indicates that True Cascadia has origins on the neo-Nazi website “The Right Stuff” 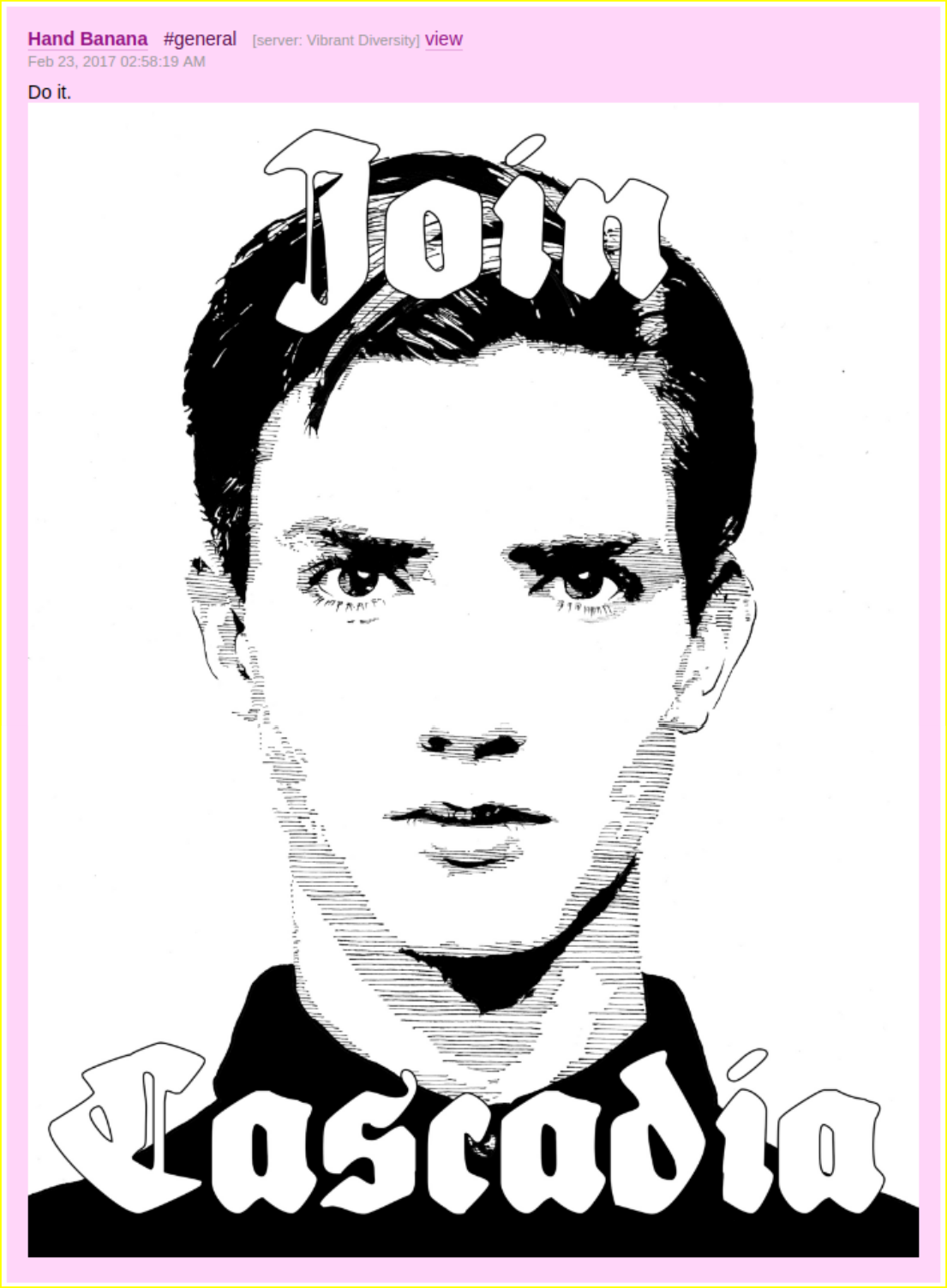 Periodically, neo-Nazi strategic disputes between True Cascadia and Harold Covington’s “Northwest Front” organization emerged, occasionally erupting into public spats on Twitter. Ken Hart’s posts in the Vibrant Diversity discord logs indicate that he was cognizant of these issues and that he took the side of True Cascadia. 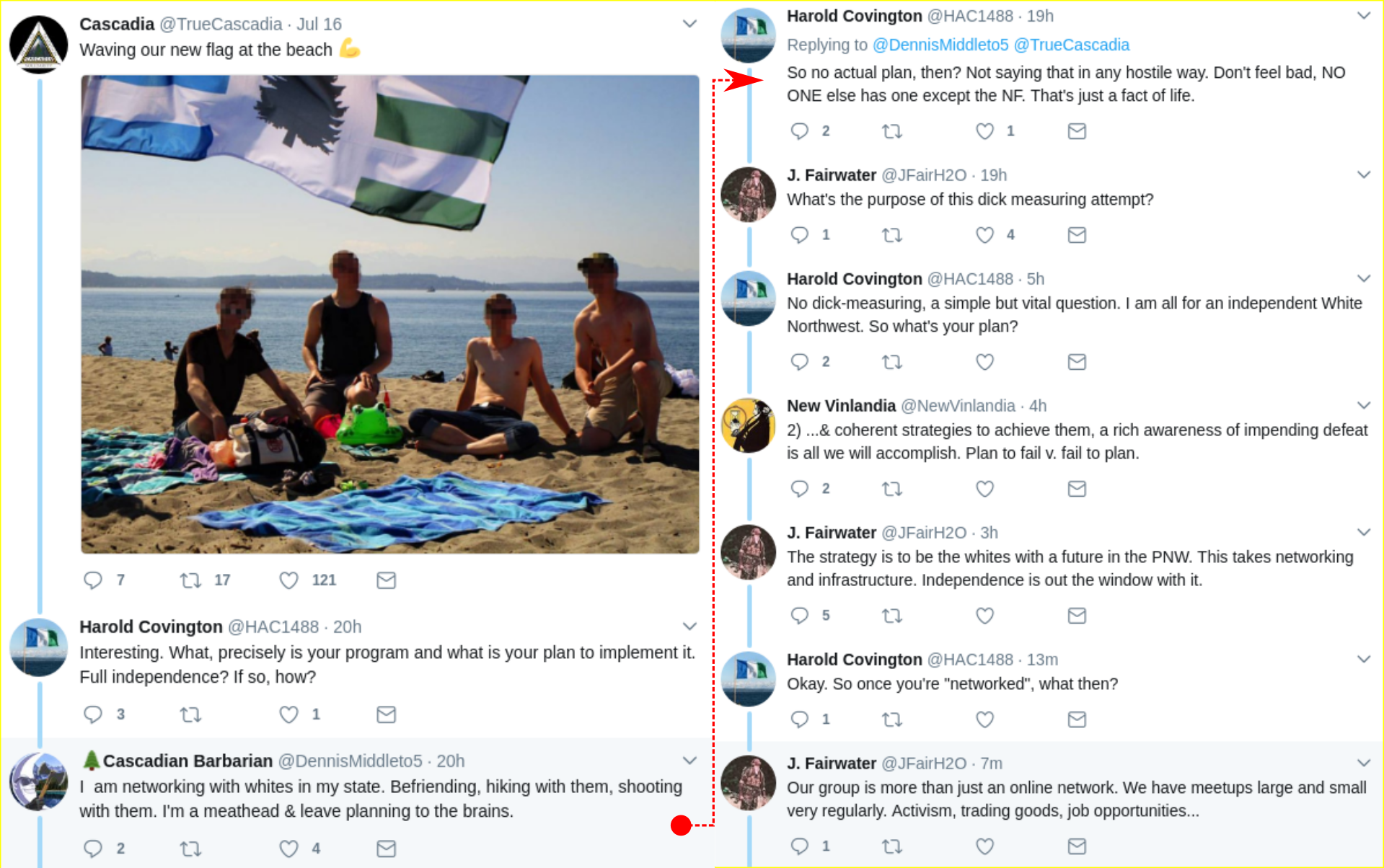 Twitter users affiliated with True Cascadia argue with Harold Covington, who believed his organization held the only viable strategy to create a white supremacist ethnostate in the Pacific Northwest. 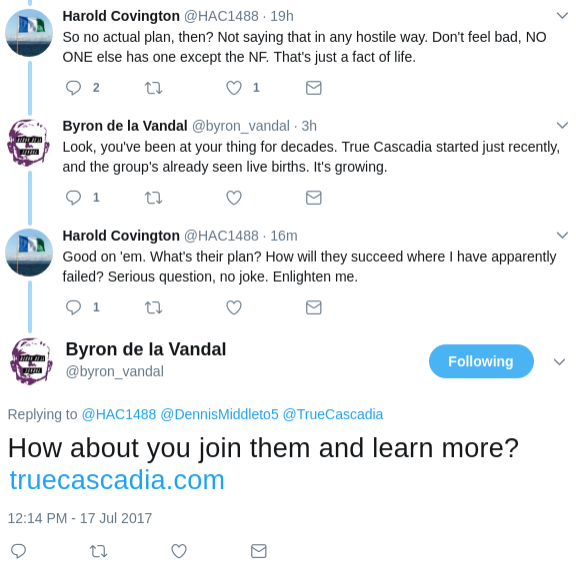 Brad Griffin aka Hunter Wallace, PR chief of the anti-semitic neo-confederate group “League Of The South” sides with True Cascadia and their origins on the neo-Nazi website The Right Stuff as the more effective white supremacist organization in the Pacific Northwest. Also mentioned is the white nationalist Northwest Forum. 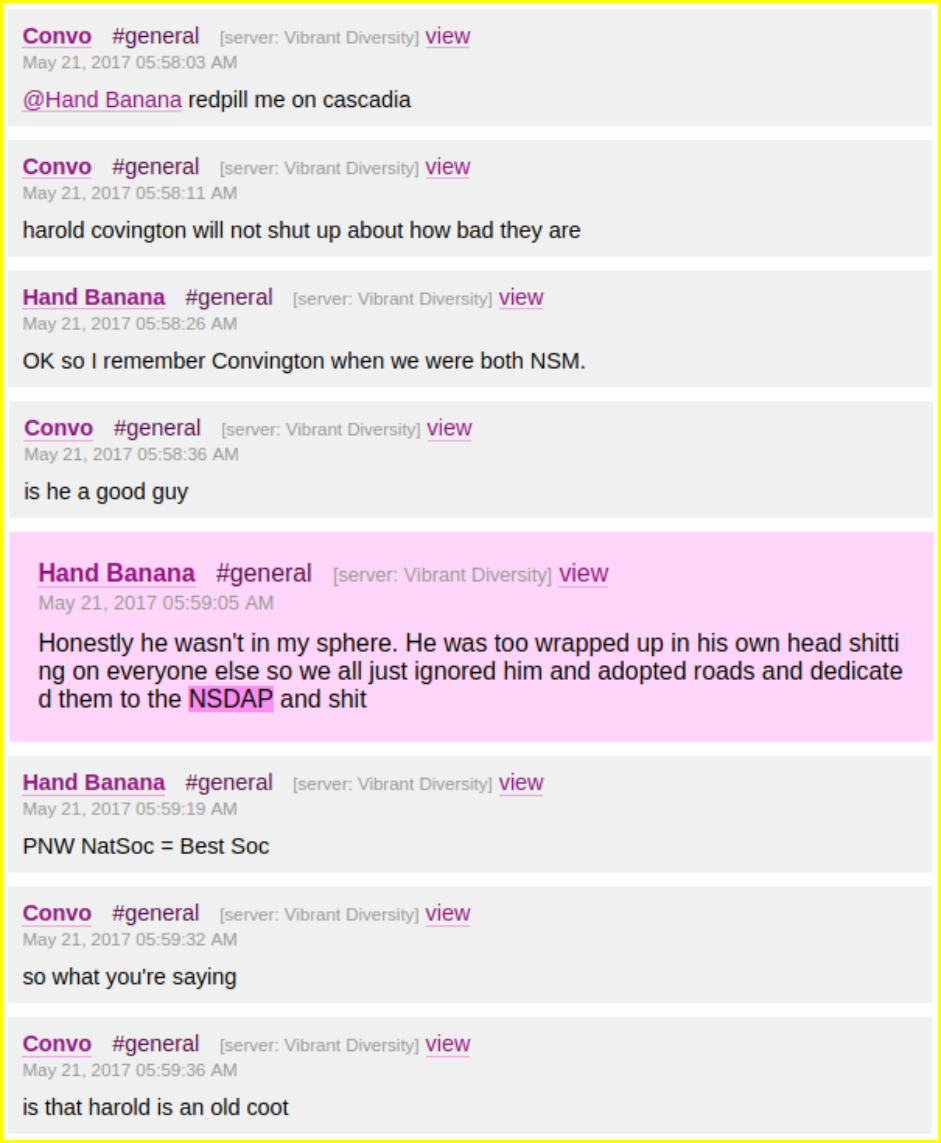 Ken Hart claims to have been a member of the National Socialist Movement with Harold Covington, and acknowledges that his current organizational affiliation with True Cascadia is explicitly inspired by principles of the original Nazi party.

Hart was recently found guilty of Assault in the Second Degree (DV) and Harassment, Death Threats (DV) against his former partner, for which he is currently serving a prison sentence of 13 months.

Transcription: “…and that tensions had been building over the last few weeks. [Partner] initially disclosed an incident that occurred a few weeks prior in September 2016 where the defendant punched her extremely hard on the arm several times and threw a mason jar at her head. In her defense interview, [Partner] also said the defendant parted her lips with a gun and tried to get her to simulate oral sex on the gun. [Partner] also said the gun was loaded at the time. [Partner] did not initially report this September 2016 incident. However, the day of, she texted [acquaintance] and told her to call 911. [Acquaintance] instead came over and the defendant answered the door while [Partner] was upstairs. Prior to…”

Transcription: “XX: Okay.
YY: And, but then he left, and I didn’t know this, but I guess there were several cop cars throughout my neighborhood. And so then they went in, um, their house and, uh, took him away, and confiscated, uh, I believe it was six guns. Um, and how I know that is because after they took him away, um, the officer came back and told [Partner] and I that he was gone, and you know, we could go on and, you know, do this, do what, you know, was necessary, uh-
XX: Okay.
YY: To help her”

This behavior is all the more appalling, given that Hart listed his occupation in court documents as a substitute teacher for the Kelso District.

_Please note that not all of these tattoos are fascist symbols, and the aegishjalmur in particular is often also displayed by anti-racist pagans. We include these tattoos so that Hart can be easily identified by community members._ 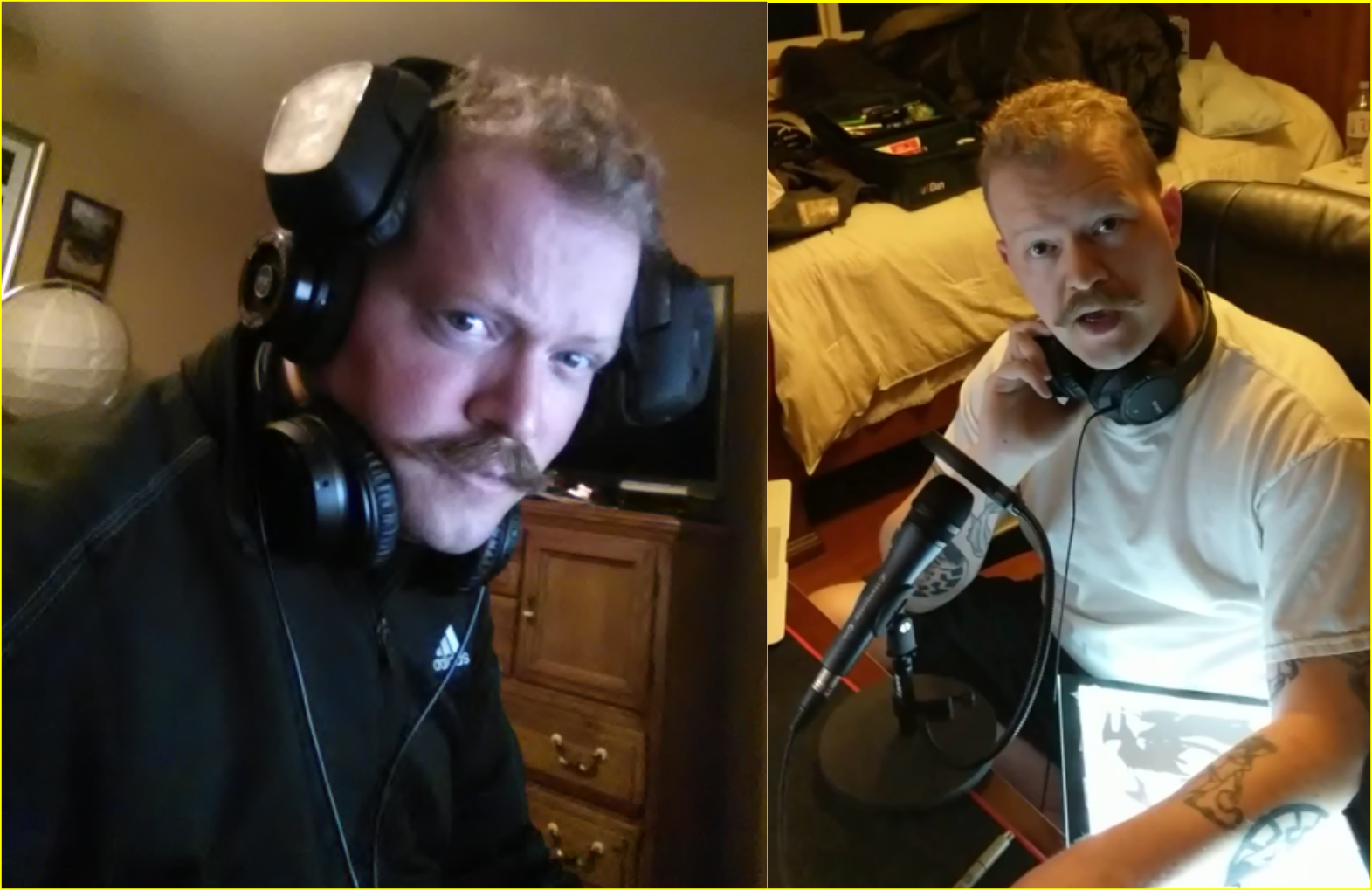 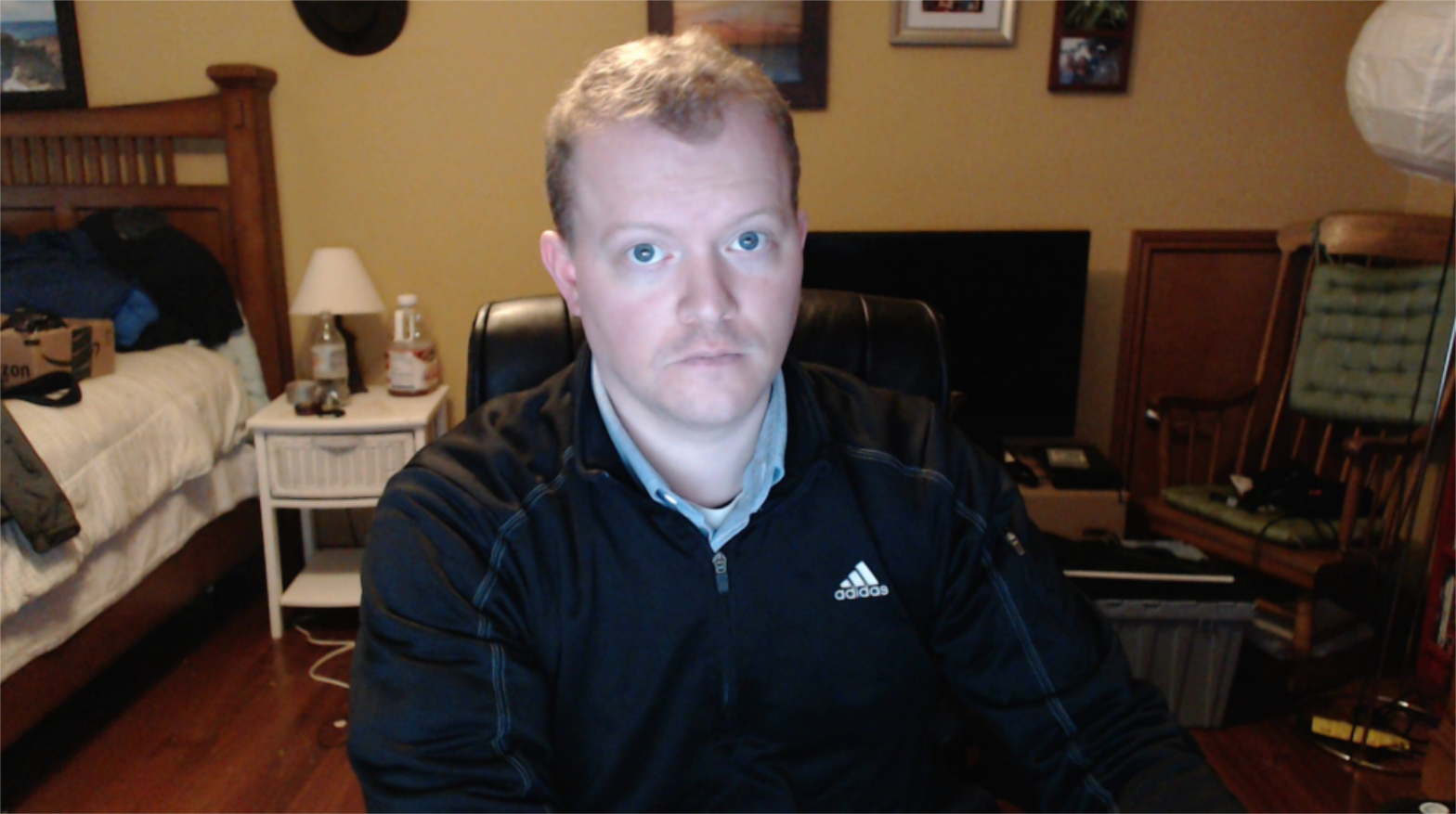 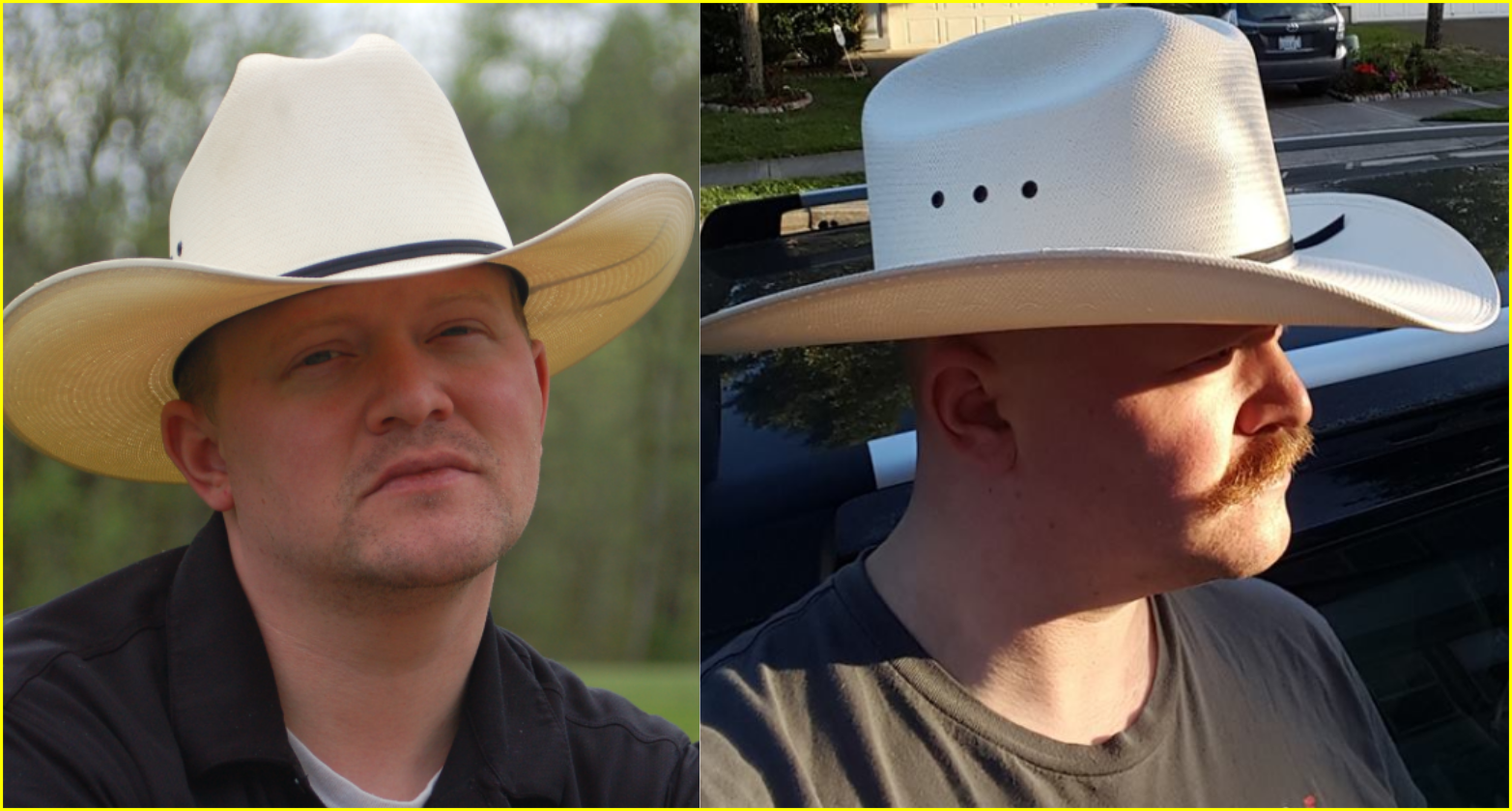 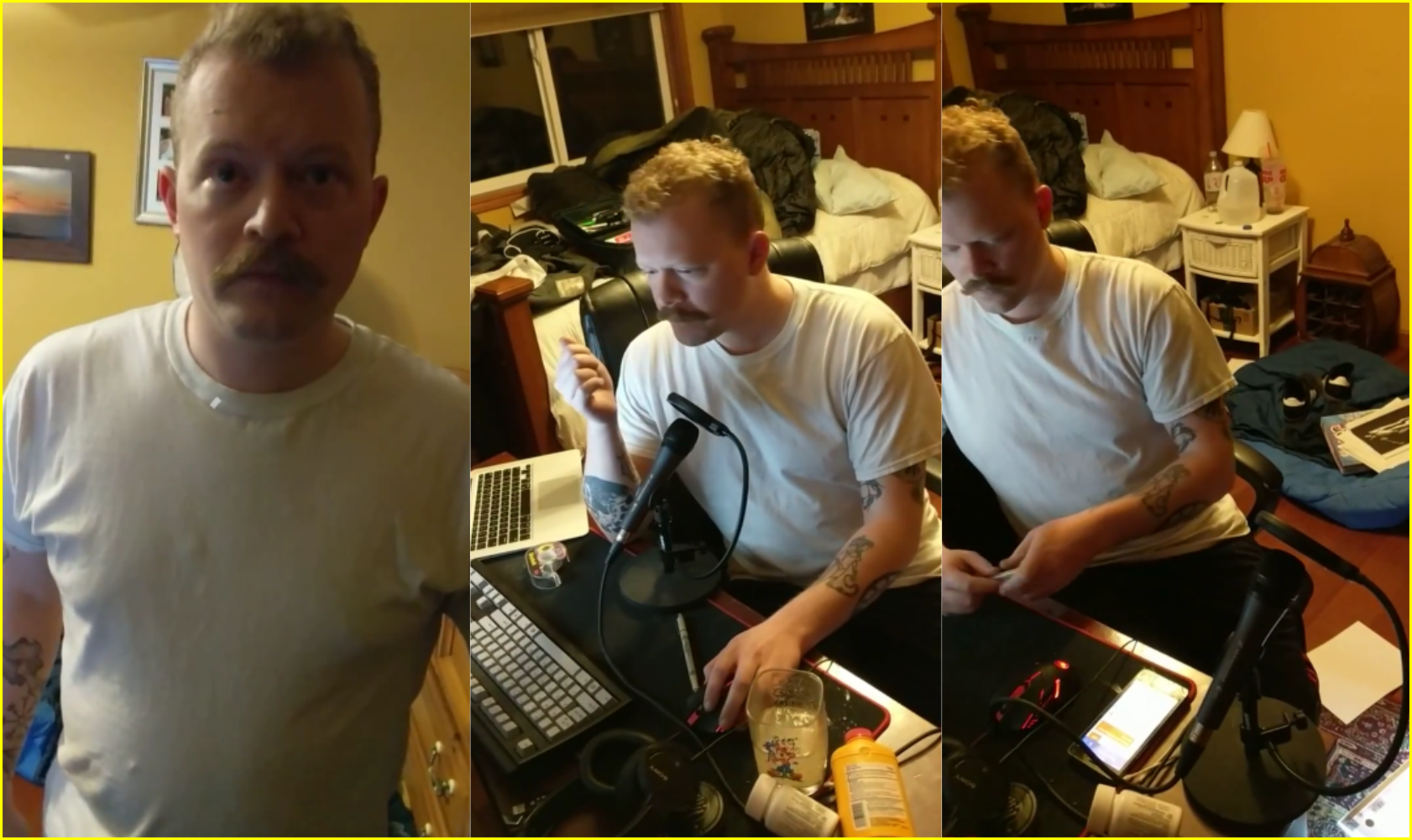 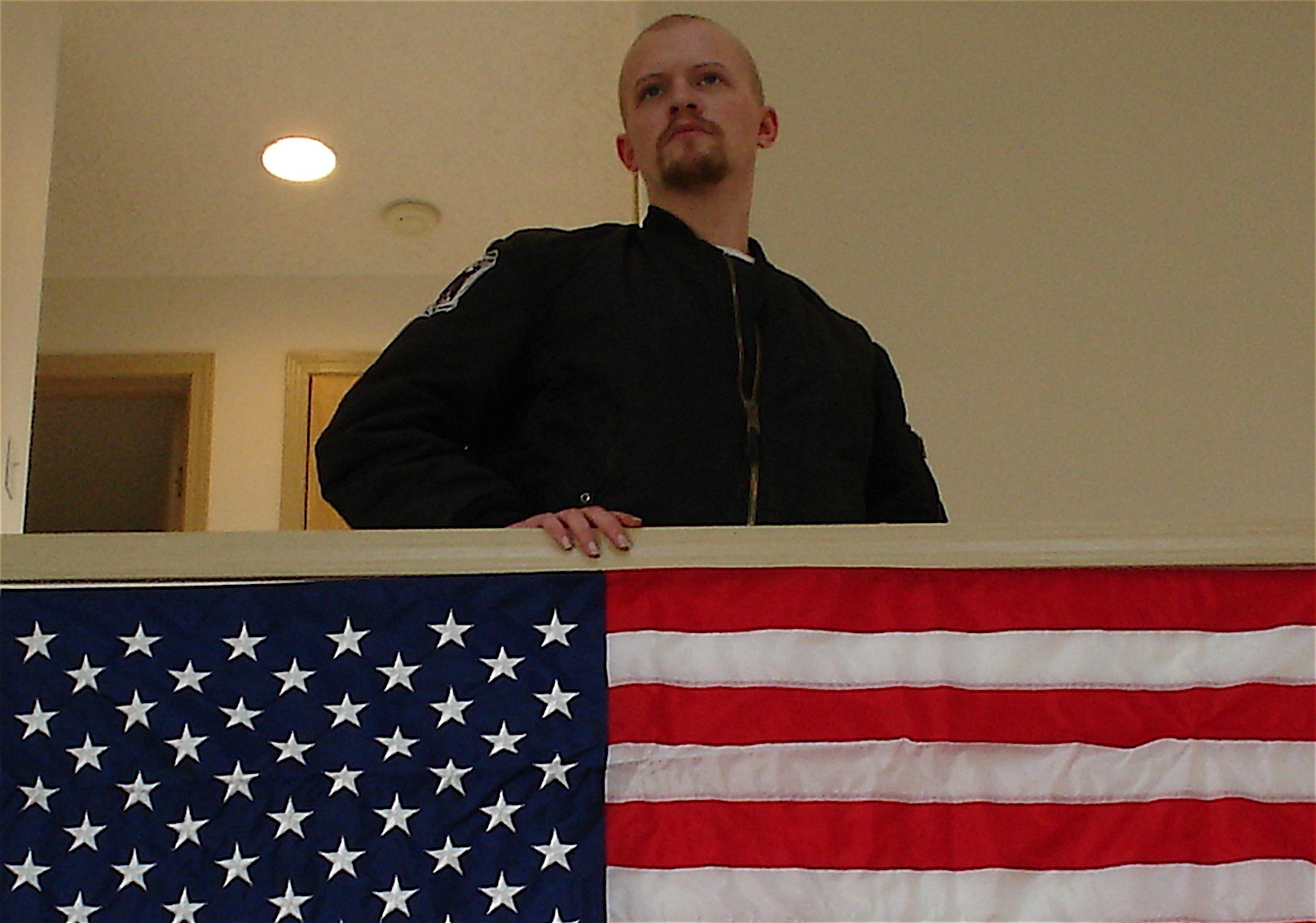 Before his incarceration, Ken Hart was an avid contributor to the online and conversational cultural aspects of contemporary Alt-Right and neo-Nazi organizing, but also engaged in offline networking and organizing with what appears to have been a somewhat sizeable group of likeminded regional white supremacist fascists. At one point in the Vibrant Diversity logs, Hart mentions having “two pews-worth” of white supremacist colleagues who regularly attend Mass at a regional Catholic church. Several other fascists affiliated with True Cascadia have already been identified in photographs. Hart’s association with the user “J. Fairwater” is particularly relevant: J. Fairwater, or Jeffrey Fairwater, is one leader within True Cascadia who maintained a sizeable Twitter presence prior to being banned. Fairwater has yet to be identified by name, but within the Vibrant Diversity logs are posts from user “J. Fairwater” that include the first unredacted public photographs of him (as well as photographs of his dog, and of him with a woman that is likely his wife/partner.

If you have any information about Kenneth Hart’s local Catholic fascist social circle, Jeffrey Fairwater, or any of the as-yet unnamed members of True Cascadia identified in the photos below, please contact us.

Job: Current (or very recent) member of the U.S. Navy, serving significant time aboard a submarine as recently as 2016. Location: Kitsap County, WA. Likely at or near Naval Base Kitsap. Originally from California. 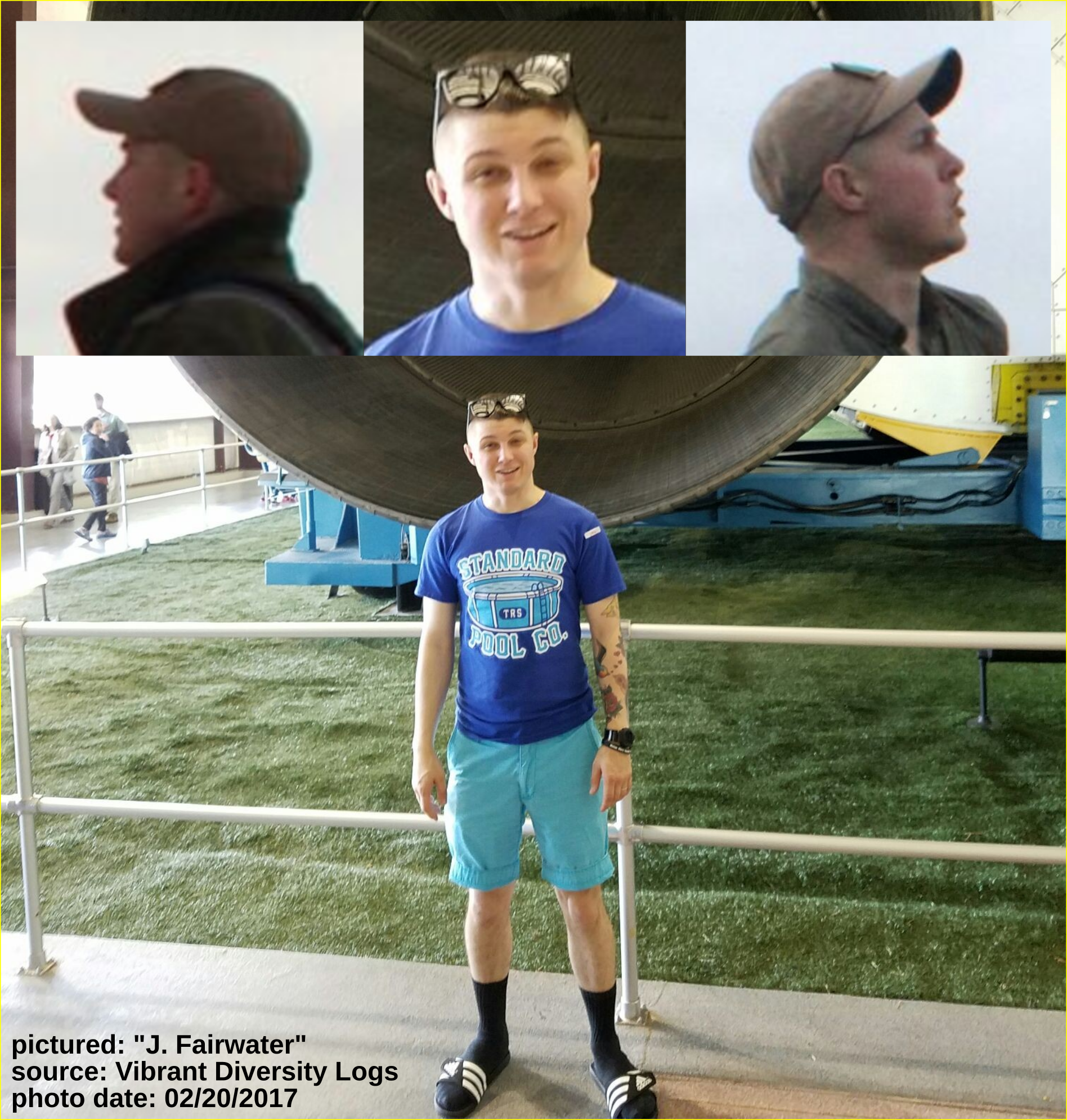 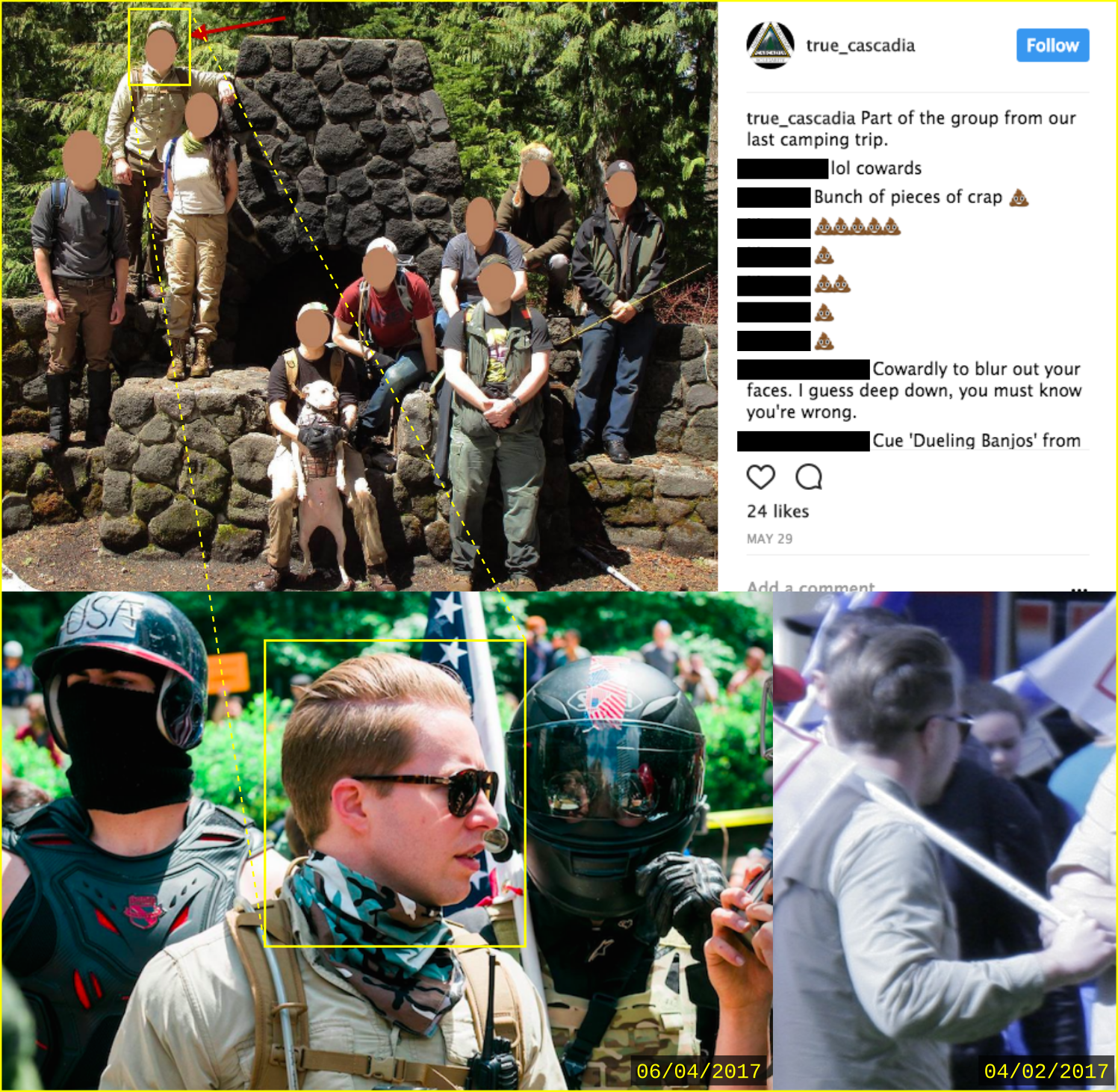 Another neo-Nazi member of True Cascadia who has attended two of Joey Gibson’s Patriot Prayer rallies. 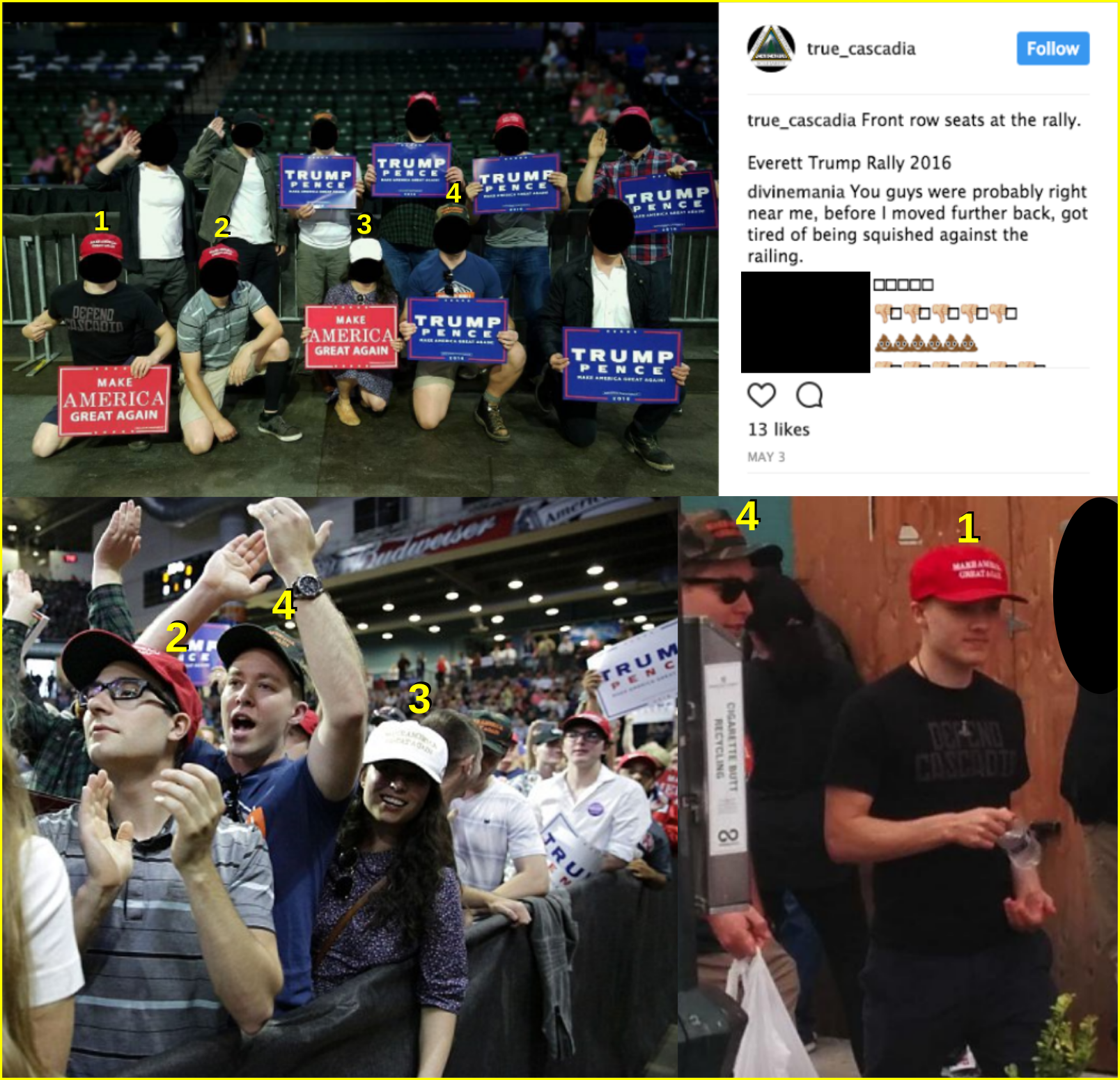 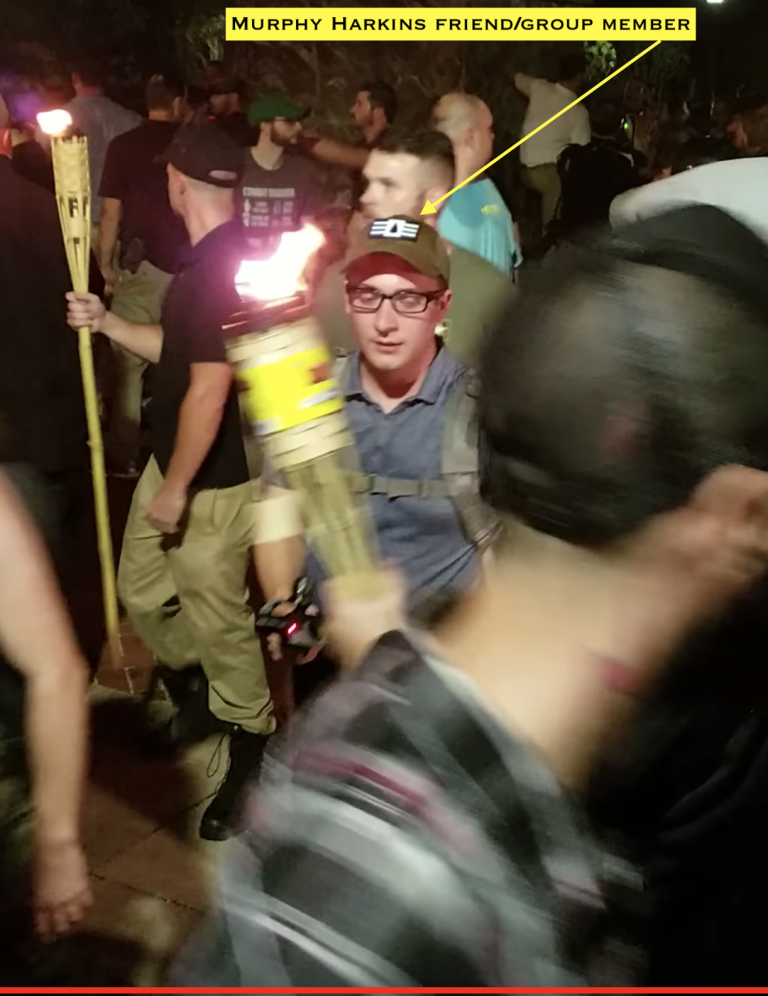 The True Cascadia neo-Nazi who is labeled as “2” in the photo above from the 8/30/2016 Everett, WA Trump rally; was also pictured as having participated in the deadly Charlottesville “Unite The Right” rally with Murphy Harkins in an article by our comrades at PNWAWC.

Ken Hart talks about bringing fellow white supremacists to church with him.

Rose City Antifa’s mission is to expose and oppose white nationalist, neo-Nazi, and fascist organizations. If you have further details on any of the fascists mentioned in this article, or about fascist organizing in the Pacific Northwest, please email us at [email protected] or leave us a voicemail at 971-533-7832.