At the center of a current maelstrom of far-right infighting involving Patriot Prayer and the Proud Boys is a relative newcomer calling himself “Vittorio DiNove.” Thanks to information leaked by “Vittorio’s” resentful fellow far-right activists, who tend to get paranoid about new recruits rising too quickly through their ranks, we are exposing his real identity today as Kim Warner Costello, an extremely violent member of the Proud Boys hate group who works at Gearheads Motorworks, an automotive repair business owned by his partner in the Montavilla neighborhood of Portland, OR.

In addition to being a member of the Proud Boys, Costello has been seen running with Haley Adams and her “PDX Crew,” and has been documented assaulting activists in downtown Portland, as well as making numerous death threats online.

Likely drawn by predictions of violence and inflammatory rhetoric by Joey Gibson and his folowers, Costello began to engage with Patriot Prayer content on Facebook in the weeks prior to Joey Gibson’s August 4th, 2018 rally in downtown Portland. The event ultimately drew hundreds of racists, white nationalists, neo-Nazis, and fascists from across the US, but they were confronted by Portland area residents and activists who easily outnumbered Patriot Prayer’s contingent. Costello nonetheless befriended members of the local Proud Boys chapter in particular, and subsequently began accompanying them to events like the Oregon State Fair and vintage automobile shows. Within a short period of time, he had officially joined that White Nationalist group. 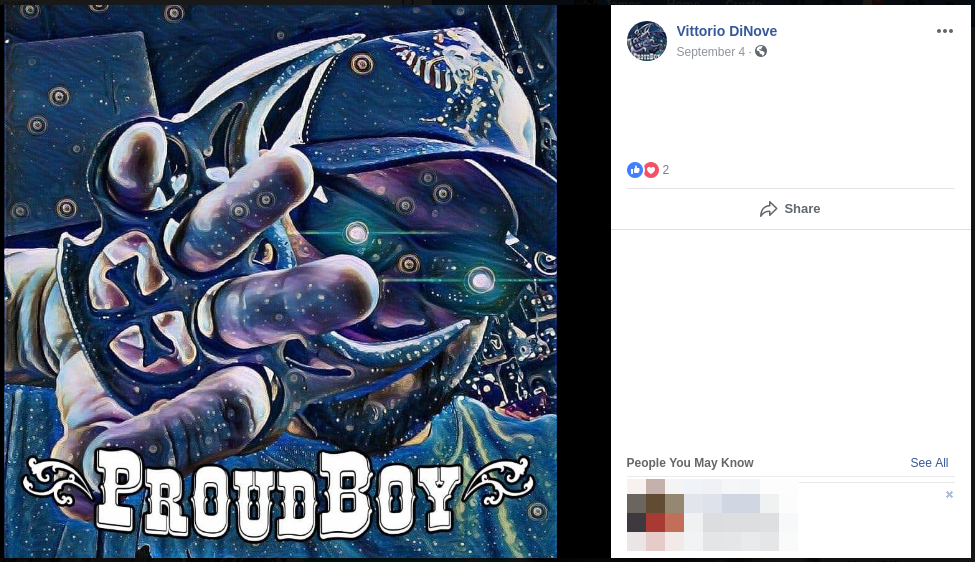 In early September, 2018 Costello begins referring to himself as a Proud Boy while showing off a set of bladed brass knuckles.

Costello also allied himself momentarily with white nationalist Patriot Prayer grifter Haley Adams and accompanied her on a mission to put up flyers advertising her rape-apologist “HimToo” rally outside of Portland Mayor Ted Wheeler’s house on October 12, 2018.

Kim Costello posts a photograph of himself outside of Portland Mayor Ted Wheeler’s house on an errand to do Haley Adams’ bidding.

As Fox News’ fixation on a viral video of activists re-directing traffic around a vigil for a black man murdered by Portland Police provoked a national wave of far-right resentment, Joey Gibson saw a clear opportunity to capitalize politically, and called for a “Flash march for Law and Order in PDX” on October 13, 2018.

During that march, Kim Costello eagerly engaged in vicious and aggressive assaults, chasing and tackling multiple Portland residents in order to beat them with a collapsible baton and then stomp on them when they fell to the ground. At one point in the evening, Haley Adams briefly interviewed Costello on her livestream, saying that he had made the large “REPLACE PDX MAYOR” banner that far-right activists had displayed at the beginning of their assaults. 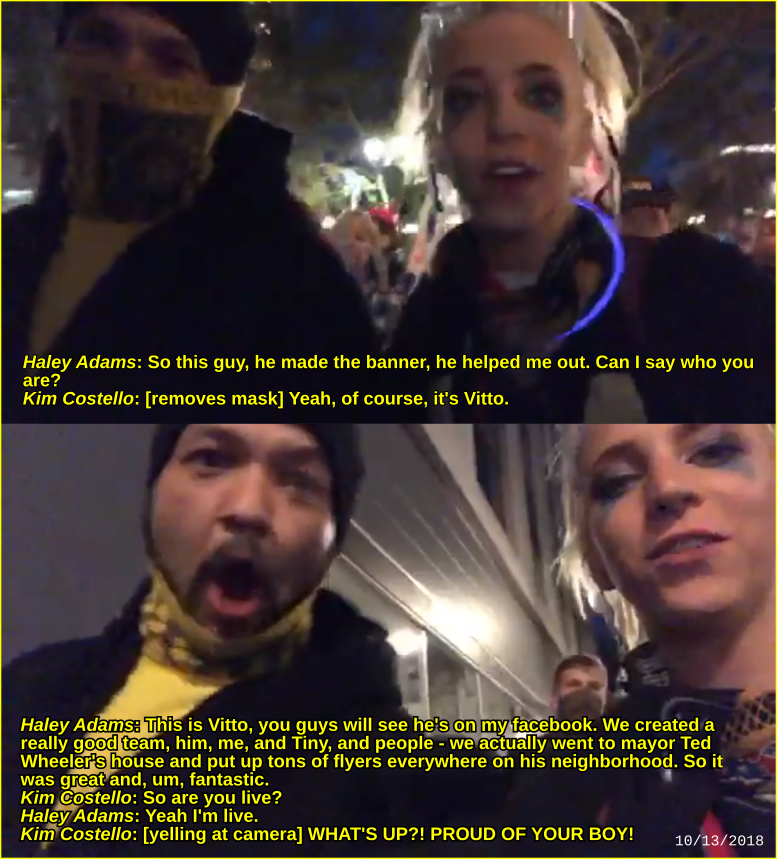 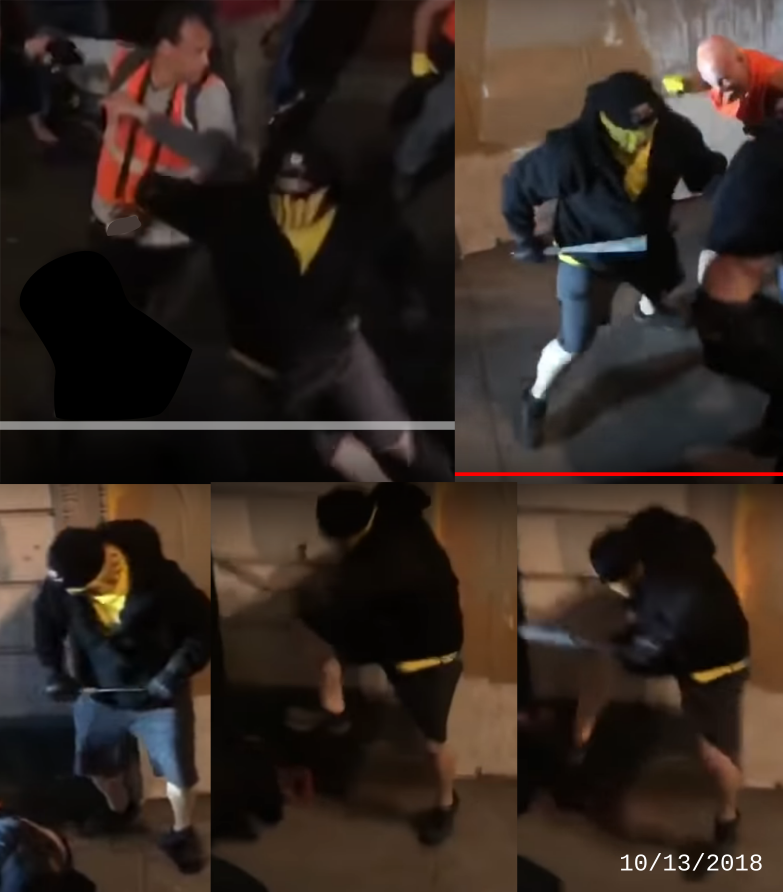 Wearing a yellow flag face mask, Kim Warner Costello chases, tackles, and assaults Portland activists. He is seen here hitting someone in the back with a metal baton, and also stomping on someone who has fallen to the ground.

The Proud Boys hate group incentivizes aggressive assaults in its founding by-laws, bestowing a “fourth degree” on members who commit assault against anyone they consider to be an anti-fascist activist (a loosely-defined category which, in their eyes, tends to include anyone who doesn’t publicly declare allegiance to Donald Trump). Gavin McInnes, realizing this particular stipulation could land him in legal trouble, eventually attempted to backpedal it in mid-2017. But the rule is still observed by most of the organization’s members, and as a result, they actively seek out opportunities to assault people. Shortly after he was filmed aggressively assaulting Portland residents, Kim Costello got a “fourth degree” tattoo on his hand. 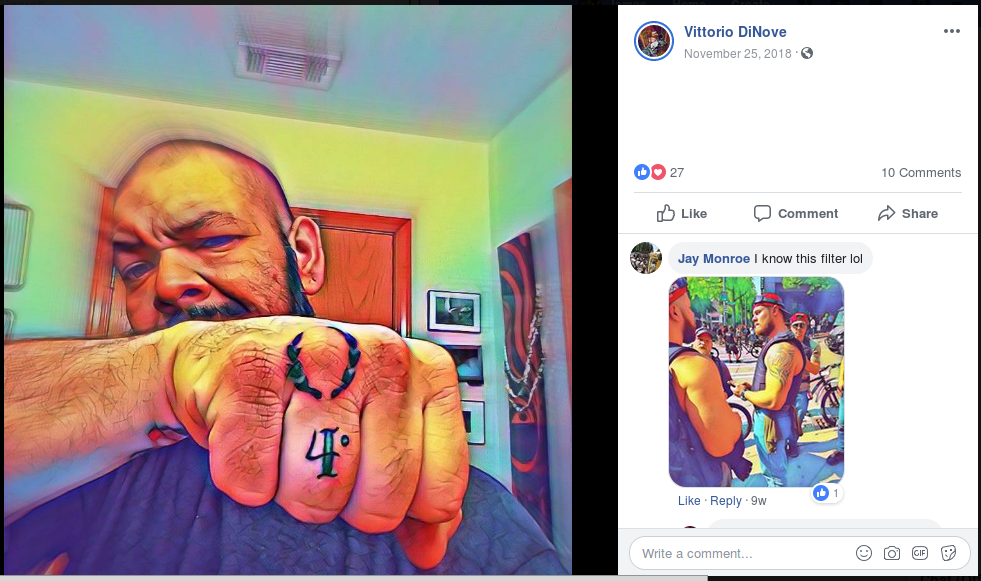 Kim Costello shows off his “fourth degree” tattoo in celebration of the assaults he perpetrated against Portland residents on October 13th.

In January of 2019, Patriot Prayer’s proto-fascist followers began showing up at various union, leftist, and anarchist spaces in order to harass and threaten the Portlanders who gathered there. This pattern escalated with the vandalism of community spaces and businesses by Patriot Prayer members in the early hours of January 24, 2019, as well as Joey Gibson’s initiation of a series of flagrant assaults which he, Steve Patrick Drury, and other Patriot Prayer followers perpetrated against Portland residents under the guise of “de-masking” them. Gibson’s campaign– a euphamism for assault– proved controversial even among his most steadfast followers. Kim Costello objected too, but his reasoning revealed that he was still adhering to Gibson’s earlier instructions that his followers should attempt to infiltrate, blend in with, and frame anti-fascist activists. Costello doesn’t so much disagree with Gibson’s plan to assault and “de-mask” activists, he just doesn’t want to be summarily assaulted by Patriot Prayer’s violent members. 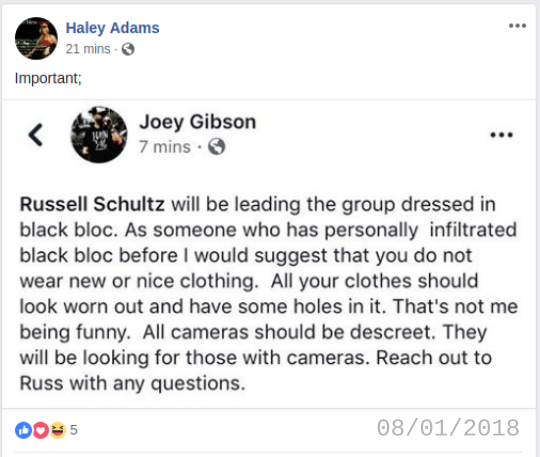 A post from early August shows Joey Gibson having encouraged his followers to dress in black bloc attire to attempt to frame Portland anti-fascist activists. 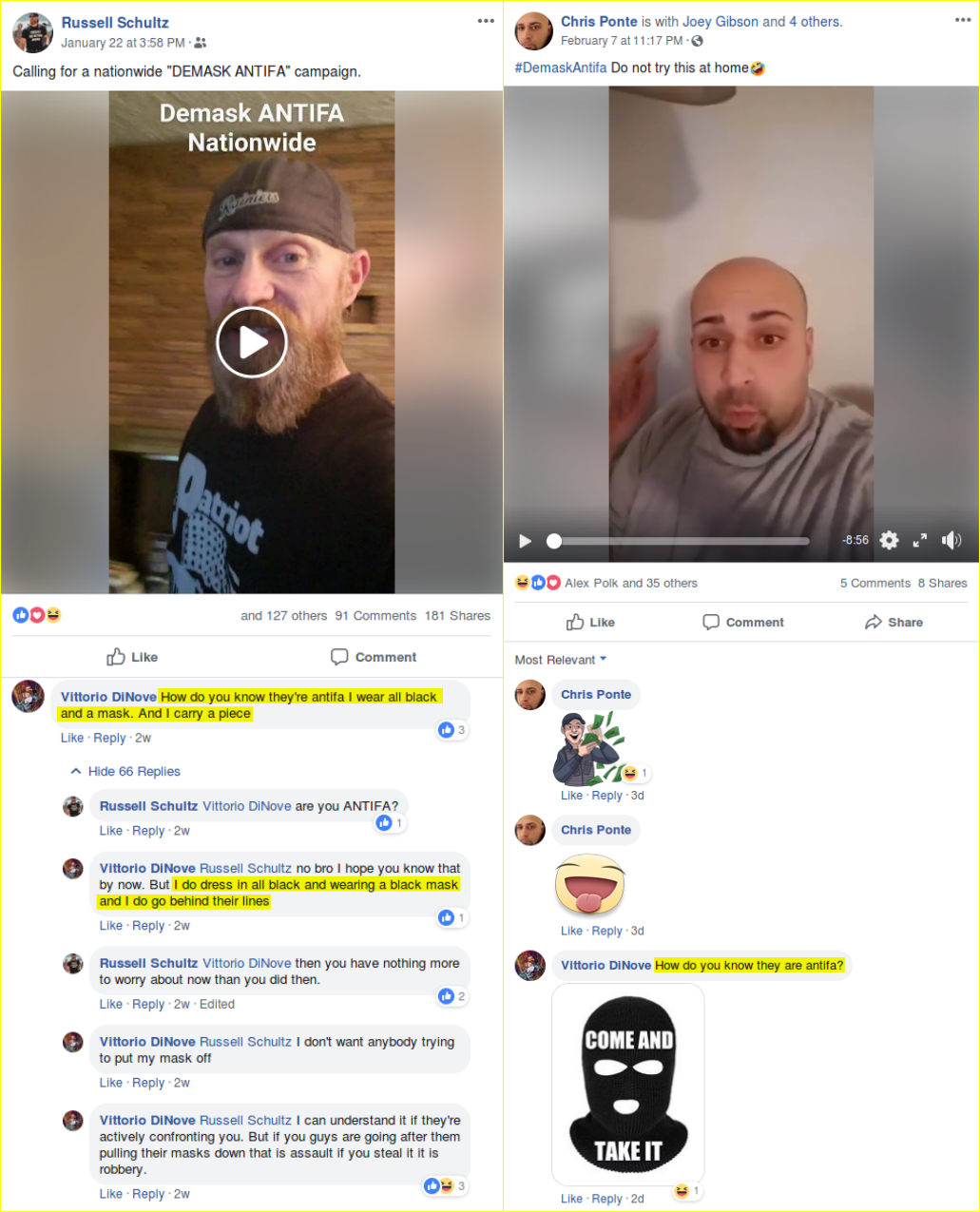 (Left, in comments) Kim Costello argues with Russell Schultz about the wisdom of assaulting people who are wearing masks and reveals that he attempts to infiltrate groups of activists using black bloc tactics. (Right) Violent Patriot Prayer member Chris Ponte encourages assault against Portland activists, and Kim Costello defends his right to frame them in order to incite far-right violence.

Joey Gibson also threatened to disrupt a three-day “Rock Against Fascism” music festival in late January, but, predictably, did not show up, knowing that the event would be filled with committed anti-fascists who would have no problem chasing him off. On the final day of “Rock Against Fascism,” a new Proud Boys splinter group called “Deathgrip,” apparently spearheaded by Costello, made several appearances around the Portland metro area to wave flags and hold another of Costello’s poorly-designed banners. In witless defiance of Joey Gibson’s supposedly city-wide “de-masking” decree, members of the group covered their faces for the demonstrations. Embarrassingly, local television station KATU provided “Deathgrip” with a platform for their incoherent, anti-gun-control posturing, by giving Kim Costello (using the pseudonym “V”) an on-camera interview. 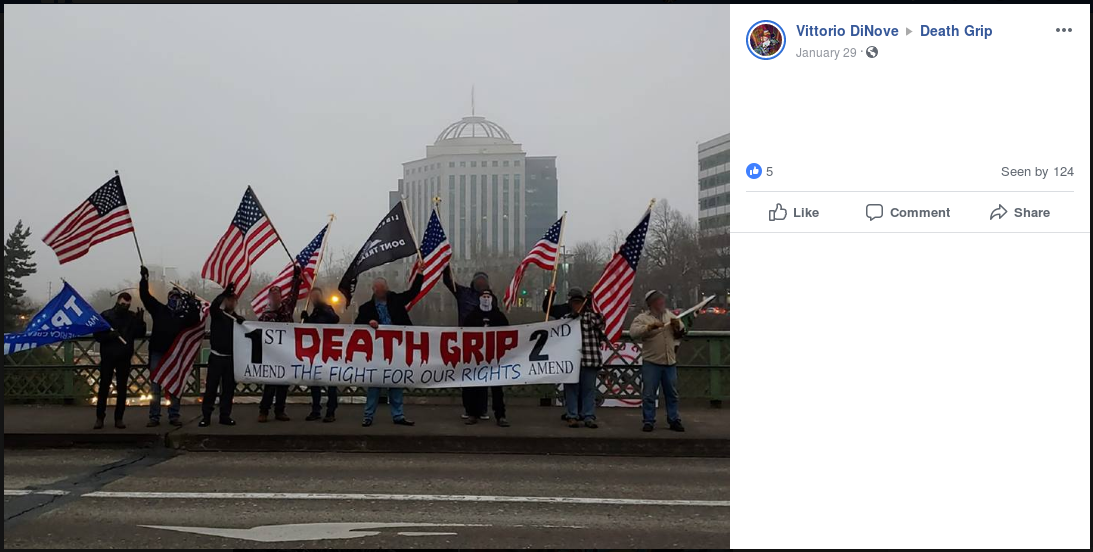 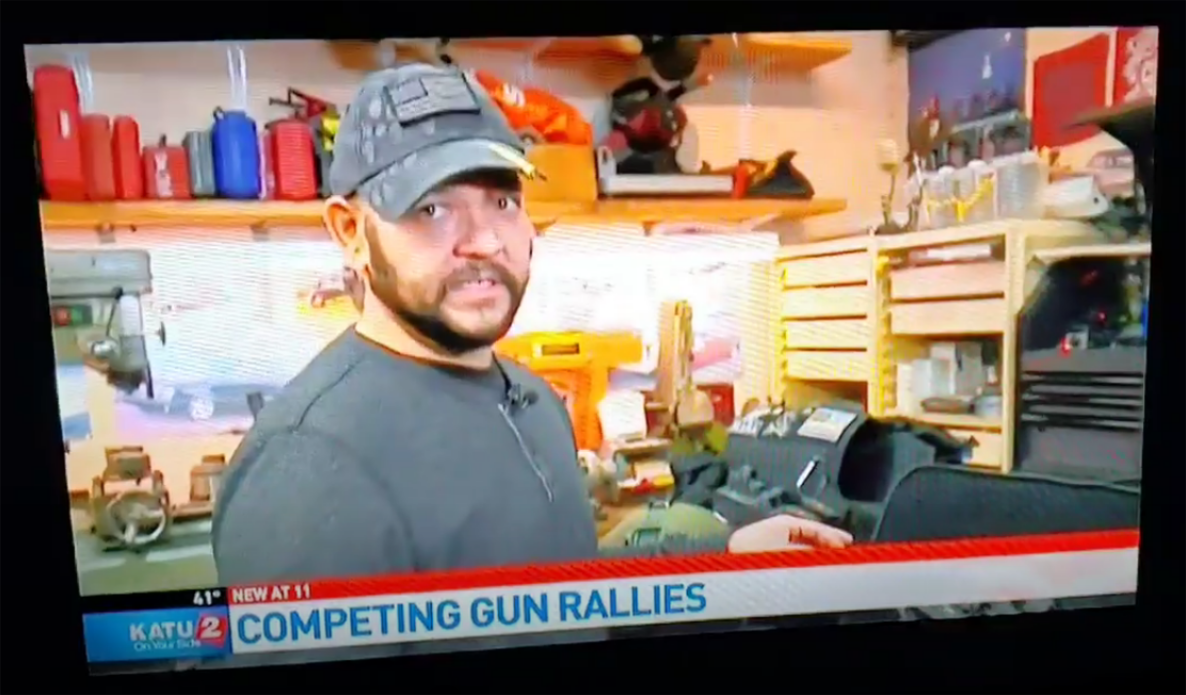 Violent member of the Proud Boys hate group Kim Costello rants about guns to KATU under the pseudonym “V.” 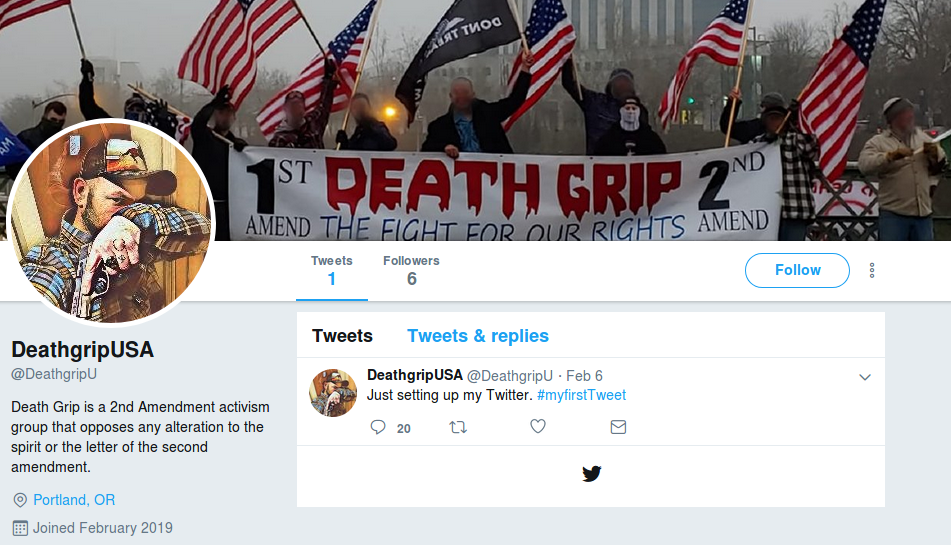 Hungry for exposure, Kim Costello uses a bathroom selfie as the avatar for the Deathgrip twitter account.

During the time that Patriot Prayer and Proud Boys began openly attacking leftist spaces in Portland, internal tensions and recriminations increased among leadership and members, all of whom were clearly becoming paranoid about their respective status within the fracturing groups’ hierarchies. Members were disavowed by various factions, warnings were issued, and middle-school bravado blossomed into open threats. On-again-off-again Proud Boy Russell Schultz, who often speaks as a proxy (or foil) for both Joey Gibson and Tiny Toese in varying turns, issued another of his “bad cop” Facebook videos, which ended with Schultz emphatically addressing and threatening an un-named enemy in some far-right internecine struggle.

Very shortly after Russell aired his grievances, Tiny Toese made a post in which he conspicuously put forward somewhat exaggerated and compensatory public support for “Vittorio DiNove,” aka Kim Costello, indicating that Costello had been the subject of controversy.

Kim Costello, clumsily attempting to consolidate power in his corner, and under the impression he was supported by far-right allies, began calling out his enemies among Patriot Prayer and the Proud Boys and challenging them to fight. On-again-off-again member of the Proud Boys hate group Skyler Coy was eager to join in the internet tough-talk. 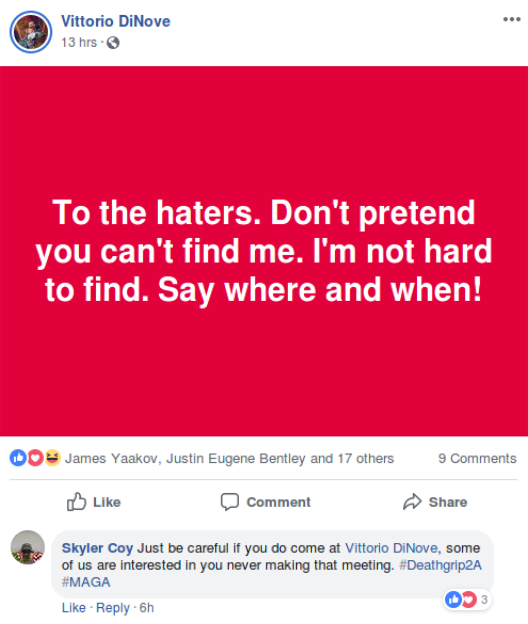 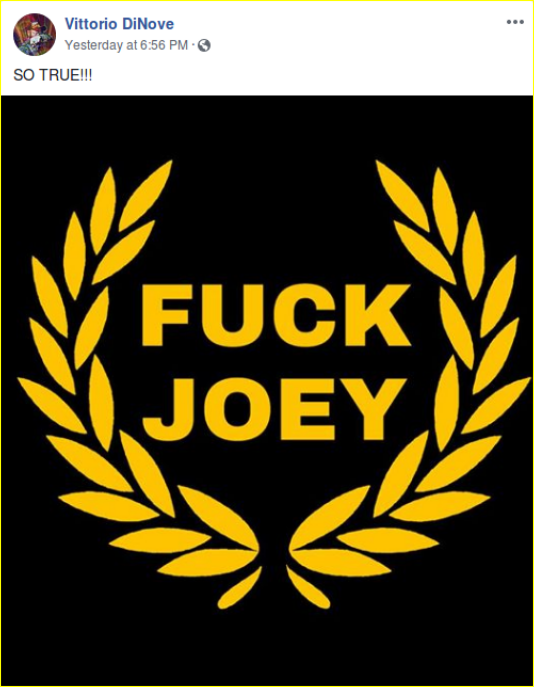 Regardless of the internal drama among far-right activists in the Pacific Northwest, a violent neo-fascist Proud Boy activist like Kim Costello should not be welcome to conduct business in the Portland neighborhood of Montavilla.

What follows is documentation of some of Costello’s repulsive, bigoted, and sadistic social media posts. 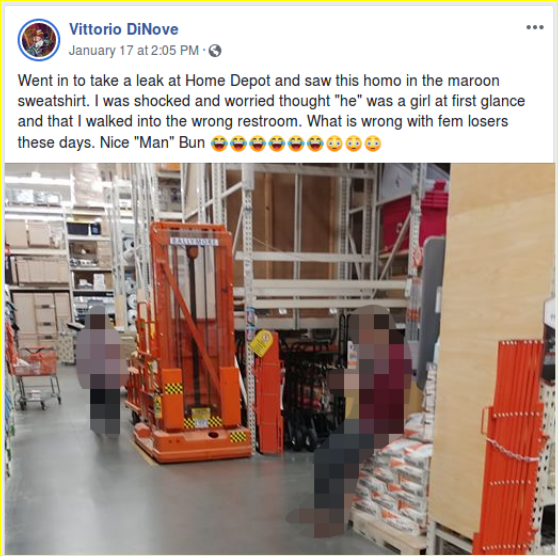 Kim Costello of Gearheads Motorworks is a virulent homophobe.

Being a homophobe, Proud Boy Kim Costello of Gearheads Motorworks is upset when he sees a rainbow flag. 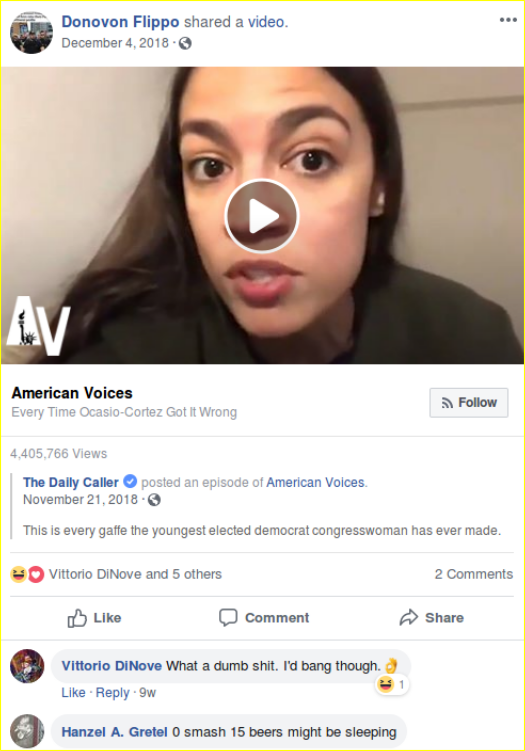 Kim Costello displays the misogynist attitude characteristic of the Proud Boys in reference to Alexandria Ocasio-Cortez, who is a frequent target of disgusting remarks among members of Patriot Prayer. 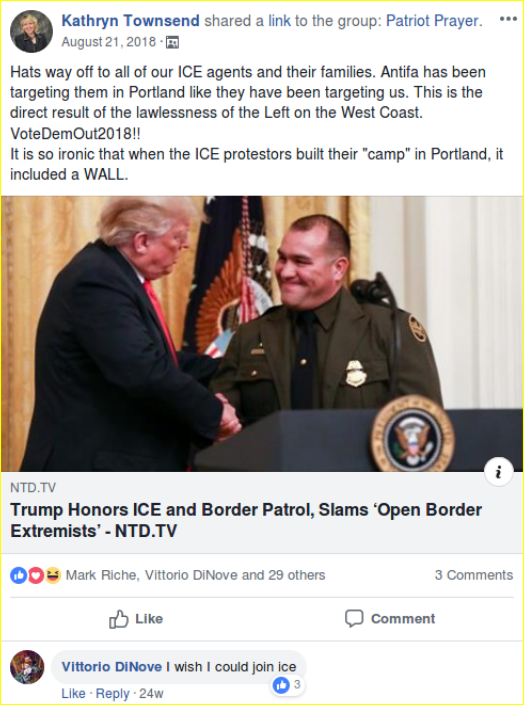 Like many members of the Proud Boys hate group and Patriot Prayer, Kim Costello worships the authoritarian power of the state and aspires to be one of the agents currently killing young immigrant children in camps. 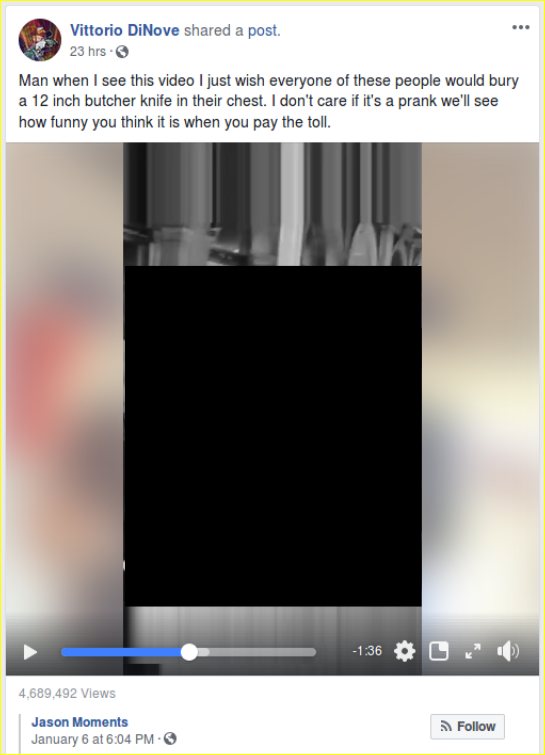 Kim Costello’s reaction to a mild internet prank video is an elaborate murder fantasy about stabbing people to death. 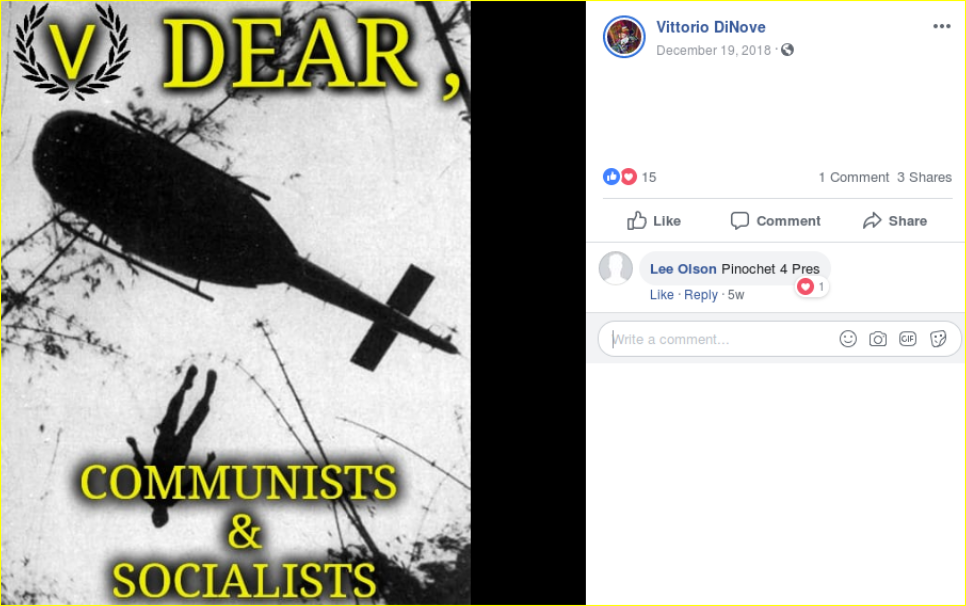 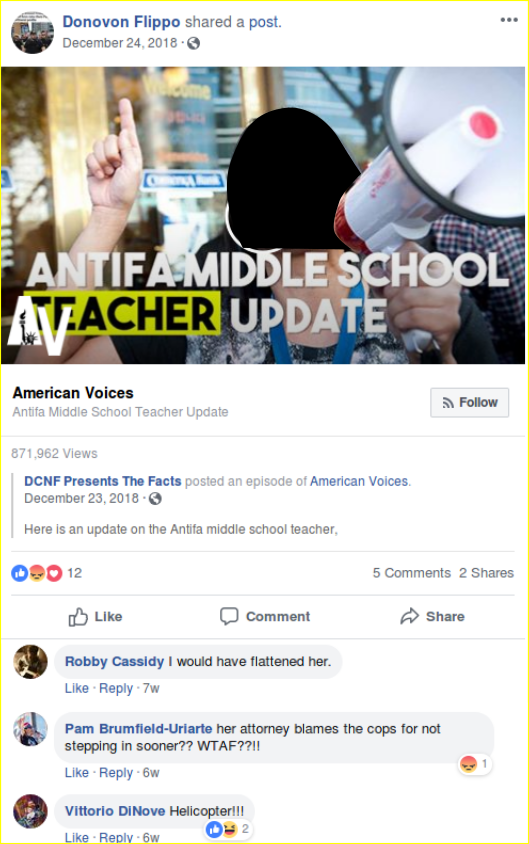 Kim Costello chimes in on a facebook thread with other racists and misogynists to advocate murdering a well-known anti-fascist activist in the manner of the Proud Boys’ favorite fascist dictator, Augusto Pinochet. 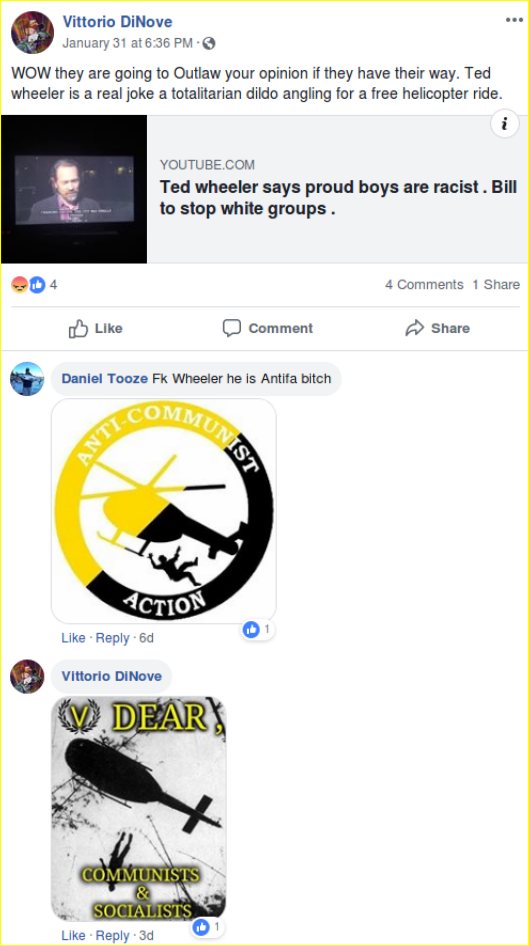 Violent Proud Boy Kim Costello suggests that he would like to murder Portland mayor Ted Wheeler in the manner of the Proud Boys’ favorite fascist dictator, Augusto Pinochet. Other members of the violent Proud Boys hate group express their agreement in the thread. 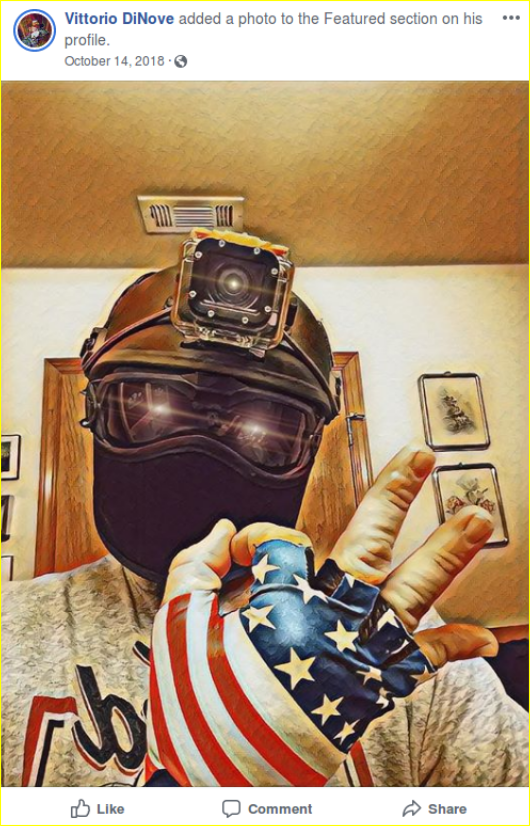 The day after Proud Boy Kim Costello was filmed tackling, stomping, and beating Portland activists with a metal baton, he posts a photo of himself trying on a new costume in the style known to the Proud Boys as “Right Wing Death Squads.” 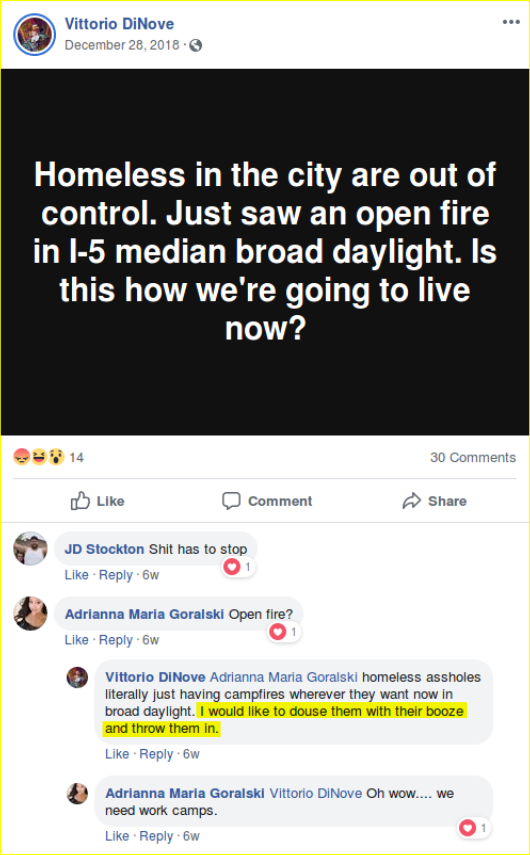 Violent Proud Boy Kim Costello, who works at Gearheads Motorworks in Montavilla, fantasizes about murdering houseless Portland residents by burning them to death.

Rose City Antifa will continue to defend our city and our communities against any incursion by racists and fascists. If you have information about Proud Boy or other white supremacist organizing, please email us at [email protected].