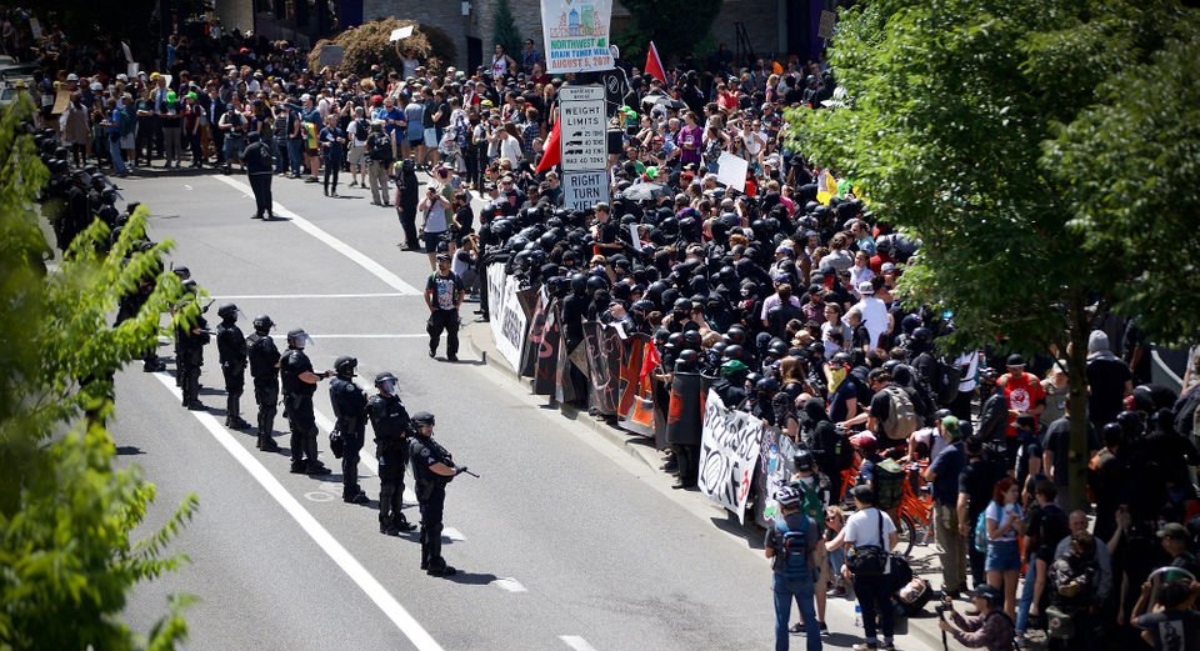 Over a month of preparation went into the antifascist response to the Proud Boys and other alt-right fascists descending on Portland on August 4th, in order to not have a repeat of the June 30 demo during which at least half a dozen antifascists were hospitalized.

Reinforced banners and shields were made, strategies were discussed and argued over and plans materialized. Antifascists groups from all over the Northwest converged. In a stunning show of solidarity, the coalition group “Pop Mob,” organized a rally that drew in hundreds, including liberals, whose implicit purpose was to support the black bloc.

Everyone prepared for the possibility of a direct confrontation with fascists such as occurred on June 30th. However, unlike the 30th, when police gave the fascists full reign to attack counter-demonstrators, this time they kept the fascists and counter-demonstrators on opposite sides of Naito Parkway (a major 5-lane street). On the waterfront side, hundreds of Patriot Prayer members, Proud Boys, Trump supporters and other fascists strolled along a wide stretch of grass shaded by trees.

Across the street, on the antifascist side, about 1,200 people crammed onto narrow sidewalks and spilled into narrow side streets in the boiling sun. Although the police strategy on June 30th worked very well for them (let the antifascists and fascists fight each other, while police redirect traffic and sustain no injuries), the demonstration on August 4th was extremely well and broadly publicized (even NPR did a story) and so the same hands-off strategy would not have looked good for the police this time around.

Within 30 minutes, the police announced they had “observed weapons” amongst the antifascists and that everyone on the antifascists side of the street had to leave the area immediately or face arrest and/or impact weapons. From that moment on, it became clear that the fight would be between the riot police and the bloc, while the fascists strolled comfortably along the waterfront carrying sticks, shields, batons and even a handgun in one back pocket.

Unfortunately, nearly all the planning that went into August 4th was about how to take what began as a defensive position against the fascists (as they were the ones to call the demonstration) and turn it into an offensive position. We did not spend much time preparing for a fight against the police – a no less important, but strategically different fight. We were immediately back in a defensive position and the defense, it seems, is doomed to fail.

The goal of the 300-500 person black bloc was clear: to protect our community from fascist violence. But as the police began beating us and firing grenades, the fascists were left to do as they pleased. A comrade who was on the front line holding a reinforced banner when the police began their assault, described the line of riot police in front of them smashing the wooden banner with 3-ft long batons with such force the banner collapsed on top of that comrade, trapping them on the ground between the banner and some sort of metal pole that was behind them.

Had the banner not been in front of them when the police began attacking, and had not protected them from the police boots and batons as it lay on top of them while they were trapped on the ground, there is no doubt the police could easily have cracked their skull. The police began firing flash grenades with deafening explosions. It sounded like a war zone.

People were being hit in the legs and head with rubber bullets – any part of the body not protected by reinforced banners and shields. In response, antifascists threw rocks, bricks, glass bottles, smoke bombs and fireworks at the police. Multiple people were grievously injured, including one person whose helmet was completely penetrated by a flash grenade that traveled into their skull. The helmet saved their life. The mainstream media has either ignored that injury completely or described it as, “the police accidentally shooting someone in the head.” Make no mistake, the police are highly trained in the use and deployment of impact weapons. This was no less than attempted murder. Despite the onslaught of “less-lethal” weapons, the antifascists held our ground and protected each other as much as possible, as more and more riot police rolled up and the impact weapons only increased in frequency. Eventually, pushed from the waterfront, injured and low on options, much of the bloc dispersed or were separated from each other.

Soon after the bloc dispersed, a friend who was in the area described seeing a large group of Proud Boys, including Tusitala “Tiny” Toese (who was wearing a T-shirt that read “Pinochet did nothing wrong”) attacking a group of POC young adults. My friend said they saw the Proud Boys holding a young black man in a chokehold; when he fought his way free, they began attacking him with metal trash can lids and macing him. They also maced two young brown women and a group of white bystanders who tried to intervene. It is unknown if the other Proud Boys involved in the attacks were local or out-of-towners. Because of the force with which the police attacked us, our goal of preventing fascist violence in Portland yesterday did not succeed.

I don’t mean to say that what we did was wrong. I believe we did everything we could given the constantly changing circumstances while facing enemies on all sides. We showed up en mass, communicated quickly amongst hundreds of people, held our ground, defended against police attacks, took care of our comrades and strangers who were injured as best we could, and strengthened affinity with others all over the west coast. And yet fascist violence continues unabated. The fascists show no signs of slowing down. There are already two more fascists rallies called for in the PNW this month (8/18 in Seattle and 8/25 in Portland), as well as the August 5th rally in Berkeley, the August 11-12 rallies in Charlottesville and DC, as well as others.

These rallies are a far bigger drain on us than they are on our enemies. The police are being paid to be there, and both the cops and the non-state fascists have far bigger resources and weapons than we do. For Proud Boys and other fascists who have no politics beyond beating up POC and antifascists, coming out in body armor and brass knuckles to a rally they know will be protected by police is no more effort, and far more exciting, than their daily gym routine.

For those of us with kids, two jobs, limited resources, different mobility levels and an ever growing list of injuries and traumas perpetuated by racist and misogynistic pieces of shit, continuing to show up for these demonstrations becomes more and more difficult and traumatizing.

Again it is time to stress that while it is crucial to never let them have the streets unopposed, we must find ways to act offensively on our own terms. Our ethics are strong, our love for each other only stronger, and our spirits wild and creative. We will never succeed if we continue letting them call the shots. The time for action on every level and from every angle is now. We are the Vilde Khaya – the unruly children, the untamable beasts. Our spirits hold more fire both metaphorically and literally than the fascists could ever aspire to. Lets bring these fuckers down.

In love and solidarity,
an anarchist