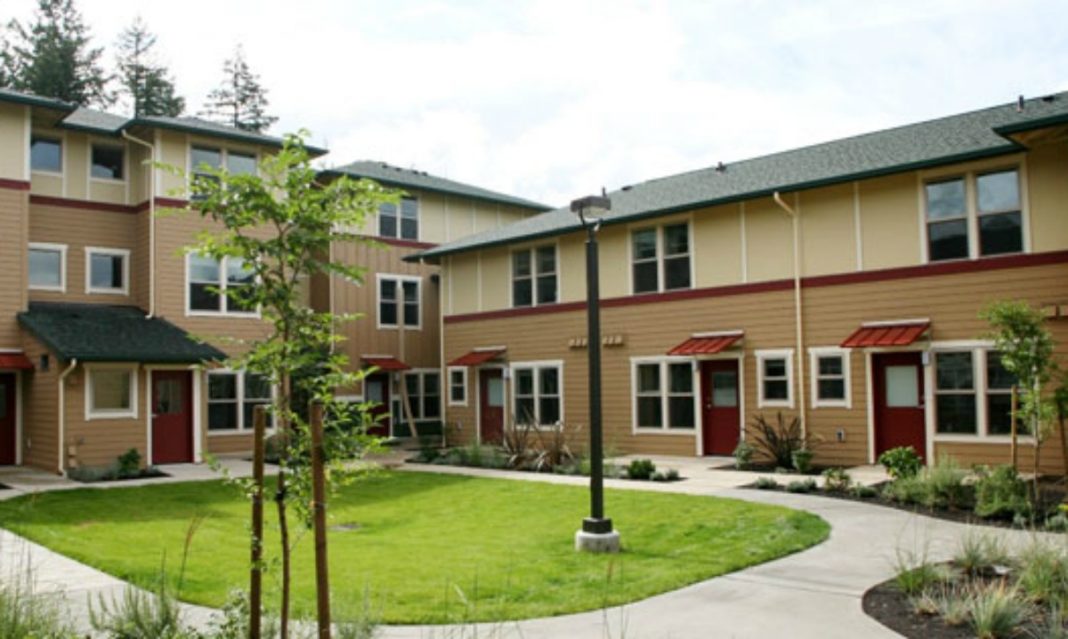 Report from Olympia Solidarity Network announces a new campaign against a large housing complex that aims to improve living conditions.

Olympia Solidarity Network has launched a campaign against the Evergreen Vista apartment complex’ management and their operator Mercy Housing. On March 22nd, 25 OlySol members and supporters delivered a demand letter to Evergreen Vista’s property manager in her office. The demand letter outlined tenant grievances and demands for the fulfillment of all current work orders, the repair of common spaces and infrastructure, such as outdoor lighting and stairways and the installation of garbage bins accessible to disabled tenants located at each building in the complex. The demand letter specified that if management doesn’t make progress towards satisfying these demands within 14 days, OlySol will take further action.

OlySol has been engaged in outreach at Evergreen Vista for approximately two months. During this time about 15 different tenants have expressed concern of similar problems regarding management. These tenants frequently experience refused and delayed repairs to the most basic appliances and structural components of their apartments. This includes, but is not limited to, refrigerators, heaters, dishwashers, bathroom plumbing, doors, sinks, ovens, mold infestations, etc.

Moreover, almost every tenant OlySol has been in contact with has reported that the current garbage disposal system is inaccessible to disabled tenants and needlessly inconvenient. The complex previously had accessible bins outside each building at the complex, but has now opted for one large dumpster that is physically out of reach for people with mobility issues and children. Most egregiously, when tenants who can’t access the dumpster inevitably occasionally leave garbage bags adjacent to the dumpster, management has been known to identify the tenants who left the garbage and subsequently penalize them. Finally, most tenants have reported general mistreatment from management. Not only has management blown off repair requests, they allegedly threaten to evict tenants over minor issues. For this reason, all tenants involved in the campaign have chosen to remain anonymous to shield them from any potential retaliation from management. As the campaign proceeds we expect intend to make contact with even more tenants at the complex, be it through door-to-door outreach or word-of-mouth amongst tenants.

Evergreen Vista is an affordable housing complex and is home to a high concentration of tenants on forms of social assistance. Evergreen Vista is operated by Mercy Housing, a national non-profit and “affordable” housing provider. Mercy Housing and many similar non-profits, operate a kind of privatized public housing, reminiscent of government-subsidized housing programs these days. We speculate that these non-profits usually require tenants to be low-income, house a disproportionately high number of Section 8 tenants and often receive various subsidies and tax credits from the government, while still charging relatively high rents. Effectively, this model of affordable housing channels government subsidies into a booming non-profit housing industry that is generally notorious for poor living conditions.

In Olympia, the most pressing housing issue for most people is gentrification and rapidly rising rents. Thus, taking on slumlords and pressing for repairs and better conditions can seem like a distraction from the bigger issue of imminent displacement. But, there exists an important relationship between gentrification and slumlordism. As rents rise generally, working-class and marginalized tenants are increasingly forced to to rent at already over-crowded complex operated by slumlords. An increasing pool of tenants with nowhere else to go further disincentivizes slumlords from maintaining units and allows them to monopolize rent prices in the “affordable” housing market. Thus, from this understanding, it is our opinion that the fight at Evergreen Vista is linked to gentrification.