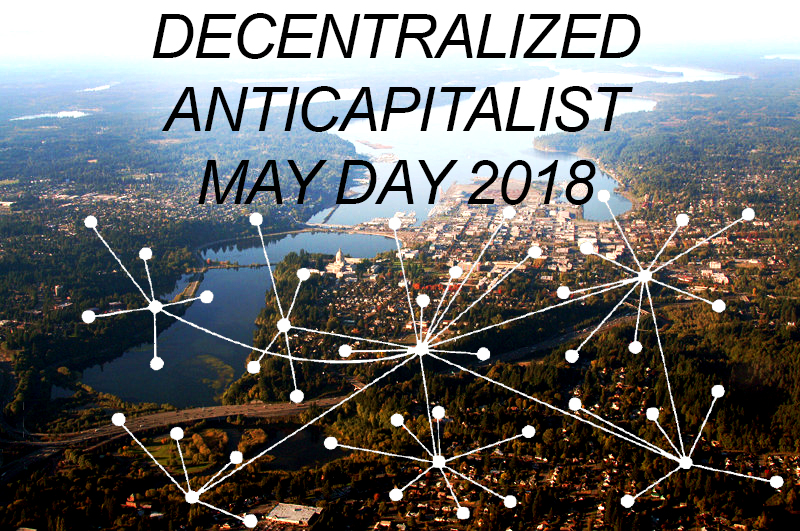 Anarchists living on occupied Duwamish land (Seattle) have issued a call for a decentralized anti-capitalist Mayday throughout Seattle and the region. Some of us living on occupied Squaxin and Nisqually land (Olympia) were inspired by this call and have begun organizing decentralized events here. We want to take this opportunity to explain why this is important and invite you to take direct action where you see fit in Olympia and beyond.

May Day is our day to fight back against the oppressive system that sucks the life out of us. In May of 1886 the Haymarket martyrs and millions of others struggled against an immiserating factory system that squeezed workers through long hours in terrible conditions. Patriarchy made birth control illegal and patriarchal marriage an imperative. Those who were hanged on November 11th 1887 gave their lives not just for a 40-hour work week but for the struggle to completely overthrow the capitalist system and all other oppression. Today we string together multiple increasingly precarious jobs and are repeatedly priced out of our neighborhoods. Politicians conspire to control our use of bathrooms, take away our access to healthcare and arrest and exploit those of us who do sex work. Our specific conditions have changed and our enemy has adapted but we recognize that we are still fighting the same struggle.

All over the Pacific Northwest the police are preparing to repress this year’s May Day. No doubt they have devoted significant hours and money toward training and supplies to prevent a repeat of last year’s events in Olympia and Portland, and previous years’ in Seattle. We must adapt our tactics and strategy. This year we will not advertise our specific plans ahead of time or gather only in one place but instead take autonomous strategic direct actions throughout Olympia and beyond. Let us be unpredictable and uncompromising – let’s fight on our own terms.

“1. Our actions will be undertaken in the spirit of anti-capitalism and anti-oppression.
2. We will observe the St. Paul Principles in regards to other actions that happen this day.
3. We will engage in direct action rather than merely symbolic action.”

These actions can be as varied as your imagination. Drop a banner, blockade infrastructure, spread propaganda, hold a microphone demo, picket an exploitative business, fire your boss, expropriate and share resources, disrupt the status quo of capitalism!