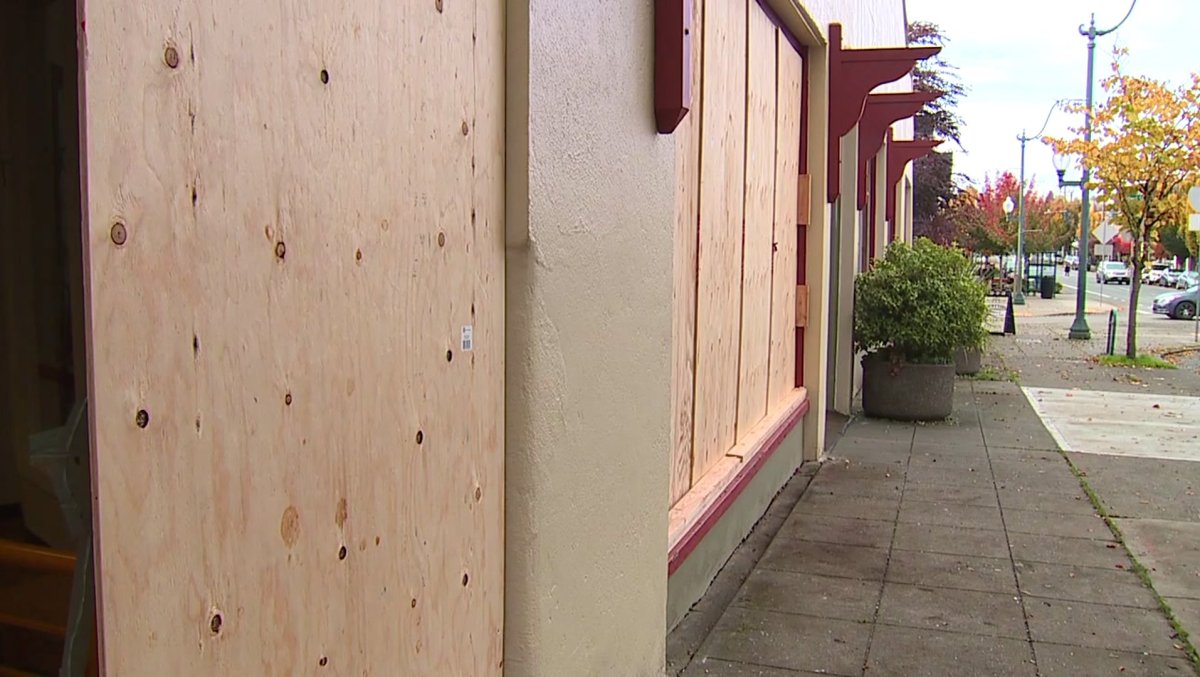 For the last week or so, Olympia has been plagued with various protest leaders appearing out of no where who claim the role of “community leader” despite the fact that no one in the community seems to have met them before. The main one being a man named Donald who came to this town to serve in the military, and has not only berated radicals for acting to disruptively, but openly worked side by side with the pigs and handed the megaphone to fascists in American Wolf who patrolled the streets of Olympia with guns to protect the precious property of the downtown capitalists so many of us have to sell our time to. Tonight (June 6th), Olympia broke with these peace police and fucked shit up to take part in the current uprising against anti-black violence at the hands of the police and the existence of police in general.
The night started with a get together in downtown Olympia at Sylvester park. Various speakers hoped the gate to the closed off plaza and spoke to the crowd. Some advocated for getting out to vote and were met with disapproval from the crowd, while other black radicals spoke of the excruciating experience of dealing with peace cops and fake shows of solidarity from white liberals. By the time the speakers had finished, Donald had packed his bags and left, and it was clear that the night would be anything but peaceful.
The march started off by going to city hall, on the way the city was decorated with spray paint anti-police messages on the walls of various banks and businesses that boarded up their windows in fear of riots. As the march left city hall and headed towards the Capitol as has happened many nights this week, various people in the crowd expressed that it was worthless to stand at an empty capitol when we could stay on the streets. The capitol is always a waste of time and nothing more than an easy spot to get kettled. Once the crowd decided to stay on the streets shit really went off. The crowd fearlessly confronted the armed American Wolf members and then proceeded to paint the town, put rocks and bottles through bank windows, and tear down the fences to the gentrifying new apartments being built all over down town, painting the windows with anti-police messages and using the fences as barricades in the street making it harder for the police to get to us. All of this was down before we got notice that a dispersal order was coming, and the crowd was able to escape before anyone was captured.
Tonight reminds us that to act in solidarity with an uprising is to fight in one or start one yourself, and that none of us will be free unless all of us are free. We must be friends and accomplices the black radicals fighting for their freedom and fight along side them for their freedom and everyone’s.
Fuck 12 forever and always
-An Olympia anarchist