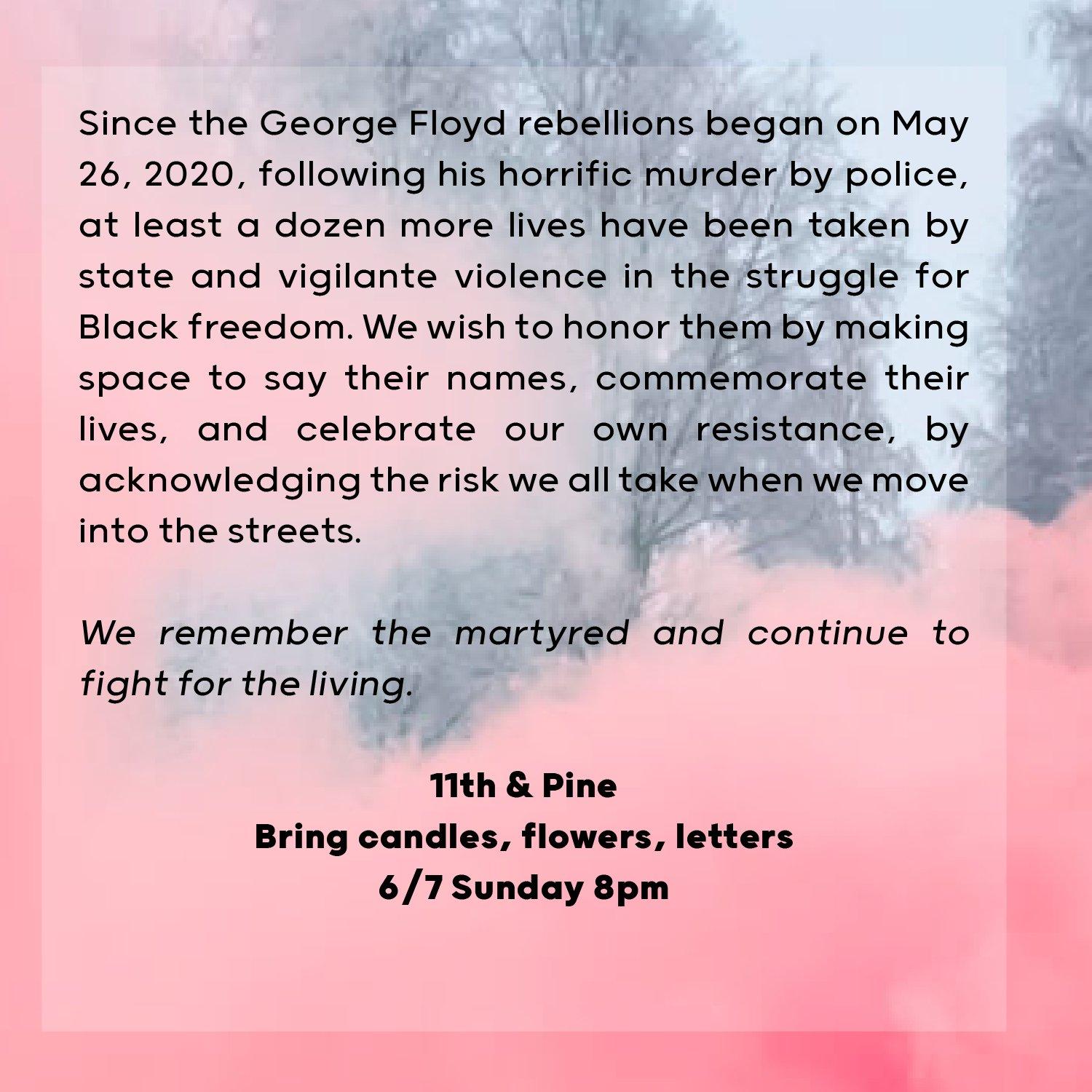 June 7th, around 8pm, people gather for another consecutive day of rallying around Cal Andersen park in a soft siege of siege of the Seattle Police Department’s East Precinct. Umbrellas have moved to the front of the crowd to face the police line. The fence that had been erected by the city has been removed. The police passive aggressively threaten violence every 15 minutes or so. A vigil is being assembled a little ways away from the line of SPD riot cops and Washington National Guard soldiers at 11th and pine.

A banner goes up for the vigil that lists the names of those killed by cops and vigilantes during this uprising. Candles are placed in front of images of the fallen. Pamphlets and spray paint cans were distributed among the crowd. The whole block becomes a mural like notes in the margins of some book about our collective mourning and rage and rebel joy. 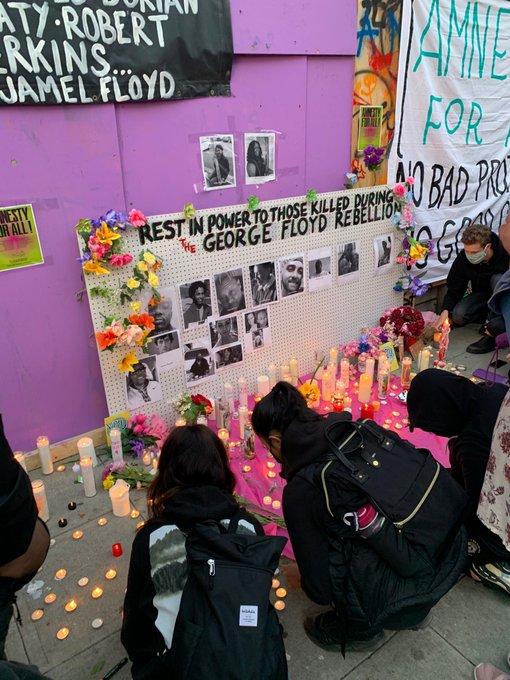 Accompanying the vigil are calls for amnesty for those arrested during this uprising. A banner hanging next to the memorial reads “Amnesty for all! No bad protesters. No good cops.” Slogans demanding that rioters, looters, protesters, live-streamers, all those who are fighting against this anti-black world and its police are set free spread out all over the scene.

Aside from heckling the police, the mood is relatively calm. This calmness is interrupted by screams. A car is barreling down the street with, swerving into people, with seemingly every intention of plowing into the crowd. With decisive action one comrade throws one of the removed police barricades in front of the vehicle and another goes for the driver stopping his vehicle. A loud bang is heard. People scatter. Is it a police blast ball? The comrade who went for the driver is reeling on the ground. “Gun!” people scream. Medics immediately assist the comrade on the ground and apply pressure to his wounded arm. A man emerges from the vehicle brandishing a pistol with two magazines tapped together. Clearly he has prepared to shoot multiple people. In the confusion he tucks his gun into his hoodie and slinks towards the protection of the police line, giving them a thumbs up before they arrest him and pull him behind their phalanx.

If people had listened to the police and not taken apart their barricade and used it for their own devices there could easily have been a casualty. If a comrade didn’t risk his life in an attempt subdue the driver there easily could have been a casualty. We protect us. Not the cops. All over this country  cops and reactionaries are running their cars into protests. They’re not only firing on crowds, they also act as an occupational force in black communities and elswhere enacting violence on target peoples. This reality has been made viscerally clear.

Story unclear at the moment but young man shot on 11th and Pine. Daniel, 26, wanted to tell his story. With the help of other medics I got a tourniquet on his arm. Street medics were on the spot with gauze and pressure. He walked off the scene. pic.twitter.com/g9Ism58YkF

After the wounded comrade is walked to an ambulance away from the police line things begin to calm a little. Confusion is in the air and some arguments ensue about the logic of handing the attackers vehicle over to the police ensue, tempers flare. Some nonsense about the cops needing the vehicle for evidence is spouted as if we can trust the people we’re literally protesting for being so vile and who also have been attacking us every night. All in all though things were calm.

Throughout the night the graffiti spreads form the vigil and pops up all over has it has for the past week. “Fight the cop in your head.” is scrawled on dumpsters that have been dragged into the street on one of the dozen barricades that have gone up.

Eventually the police attacked and used the tear-gas the mayor lied about banning. Much more could be said about that night, but the next morning the vigil remains. The following morning workers hired by the city clean up the voices of black radicals washing away tags like, “Black Girl Commune” and “Black Trans Lives Matter.” They may have removed some of the writing, but soon after people have once again returned to that very intersection, taking risk so that they may continue the struggle for black lives/liberation and against police repression.

Remember the dead. Fight like hell for the living.