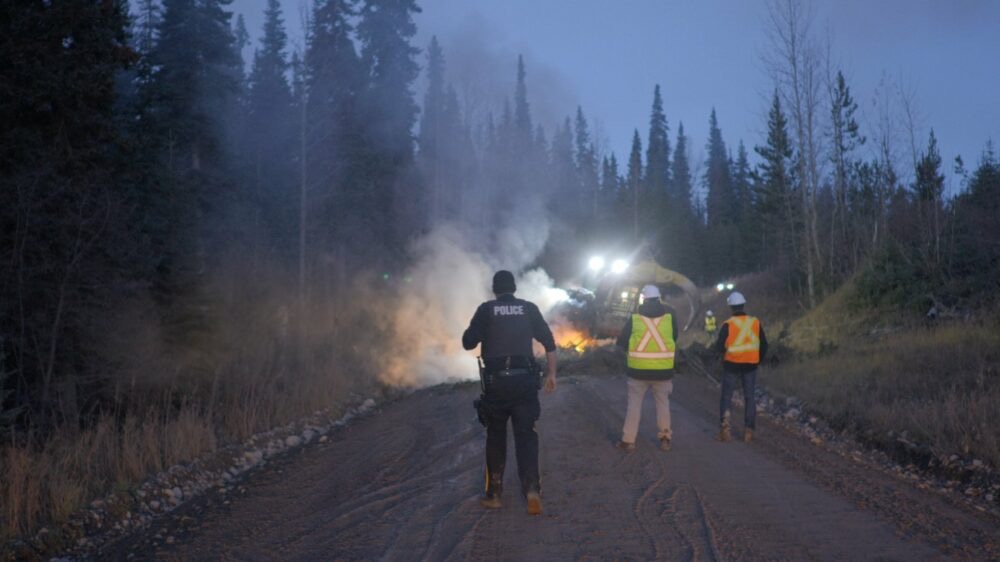 On wednesday morning an action was put into effect in response to the posturing of RCMP in Likhts’amisyu territory which is approx 40 km away from the Gidimt’en drill site occupation. The action was in solidarity with Chief Dtsa’hyl who, while acting as an enforcement officer for Likhts’amisyu clan disabled 10 heavy machines which were being used to destroy their unceded territory and build a new road, which CGL says they own. It was assumed by police presence and a variety of other factors that enforcement would occur, and it did. The main objective was to show force, solidarity, and defiance to the incursion of the Canadian state and industry on Wet’suwet’en Yintah.

The action consisted of several components and was completed without arrests or injury. Tactics were deployed successfully and though police presence and security/worker aggression had potential for escalation and direct conflict, none occured.

At several points along the Morice West FSR, on Gidimt’en territory, trees were felled and other detritus was put into the road, along with improvised caltrops. This only occured once Dtsa’hyl was arrested and reinforcements were deployed by the RCMP. Over a dozen CGL workers were successfully turned around at one side of the blocks, after a tow rope they were using to pull away a tree was severed with an axe and they were instructed to return to their vehicles. On the other side of the blockade several security workers were also approached by people in bloc which resulted in their immediate retreat. The space was held while other tactics were deployed further down the road, and when it was clear that heavy machinery and RCMP were nearing the front lines to remove the debris, a blockade was set on fire and Gidimten supporters evacuated into the woods and safety.