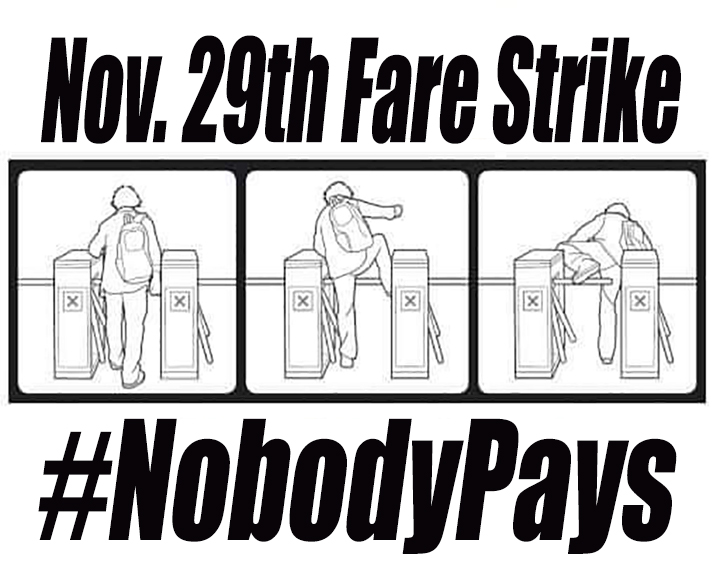 A call for a November 29th Seattle Fare Strike has been released on Puget Sound Anarchists. A fare strike is a mass refusal to pay fares when boarding buses or trains. Like a labor strike or a rent strike, a fare strike seeks to secure concessions from governments and the wealthy (in this case, transit agencies) through economic disruption. Fare strikes have been successful throughout the world, winning lower fares, better transit service and improved pay and working conditions for transit workers. Fare strikes can be lead by riders who all collectively refuse to pay a fare, or by transit operators who refuse to collect fares during labor disputes. Transit riders and workers have staged fare strikes in places as different as Turin, Italy, Chicago, Santiago, Chile and Grand Rapids MI. 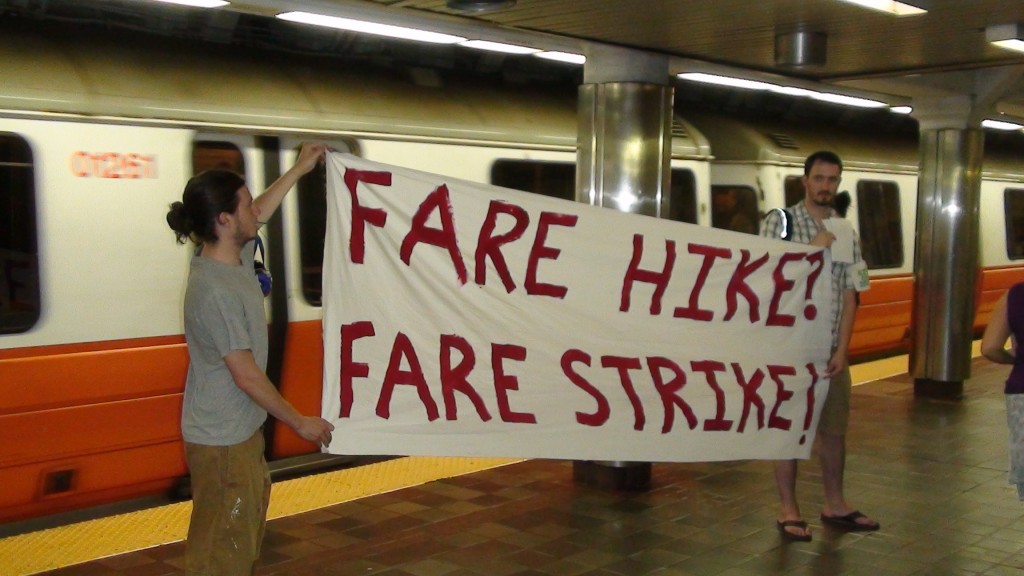 The Seattle Fare Strike call has generated controversy within left-leaning urbanist discussion circles (such as Seattle Tap-on Teens for Transit-Oriented Teens) that warrants engagement. Below are responses to some of the most frequently asked questions in these discussions. Some of the following content is particular to Seattle, but much of it is applicable transit-related direct action anywhere.

“A fare strike will bankrupt public transit, the very last thing we want.”

A fare strike, like any strike, is a collective withdrawal of our economic participation in order to force concessions from our class enemies. Theoretically, it is possible that a fare strike could bankrupt transit agencies, carrying detrimental effects for transit riders. So too could a labor strike theoretically bankrupt employers and render workers unemployed and a rent strike theoretically bankrupt landlords and render tenants homeless. The historical reality, however, suggests that these scenarios are rare; usually targets cave or strike participants end their action before capitalists, landlords or the state go completely bust (and of course, in certain special moments, strikes can succeed in expropriating and repurposing capitalist property.) Moreover, fare revenues usually account for only a minority of total transit revenue, decreasing the likelihood that a fare strike would bankrupt transit agencies. In most major cities, the state will neglect mass transit infrastructures, but they but won’t allow them to completely disintegrate. Mass transit facilitates the exploitation of wage labor and the consumption of commodities by transporting working class people to and from home, work, school and sites of commerce. It can’t be done away with completely without a subsequent collapse of urban economies.

Transit financial woes are not a question of economic resources, but of political priorities. The resources exist to provide free, frequent, 24/7 mass transit. Instead resources are squandered on prisons and police or are hoarded by the wealthy. It is precisely the disruptive potential of a mass fare strike that could force shifts in budgetary priorities and redistributions of wealth in the interests of transit riders and all working class people.

“A fare strike will be used as an excuse to further cut transit service.”

As transit agencies are often fishing for bogus excuses to cut back essential service (while wasting resources on security and cosmetic “improvements”), this isn’t entirely out of the question. However, if a fare strike grows to the extent of threatening significant economic damage to transit authorities, it is also unlikely that transit authorities could successfully respond with service cuts. An escalation like service cuts poses the danger of disruptive activity like a fare strike being re-channeled into militant opposition to service cuts or possibly generalizing into anti-neoliberal revolt. 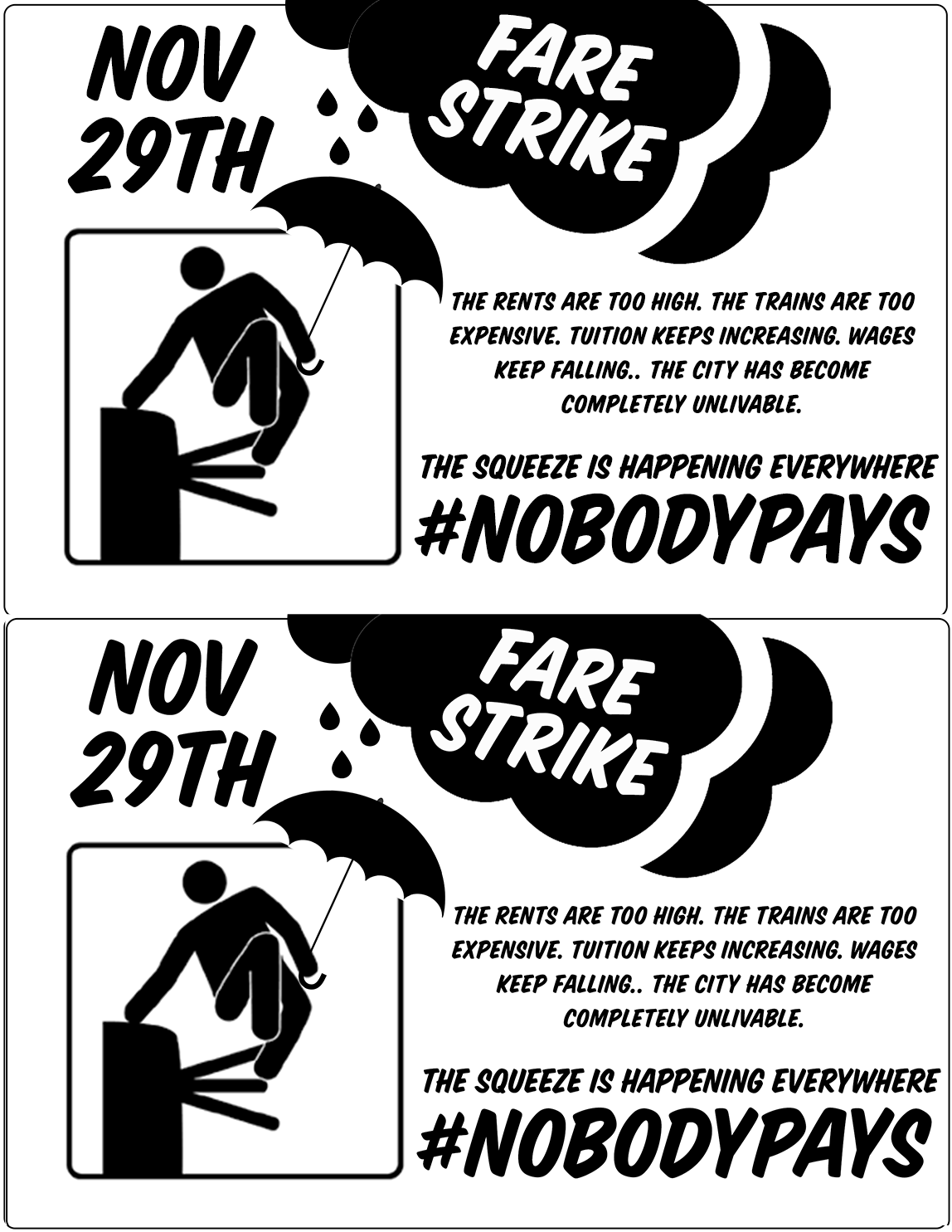 A farebox recovery ratio is the percentage of transit operating expenses covered by passenger fares. It is true that King County Ordinance 18321 stipulates King County Metro (one of Seattle’s main transit agencies) maintain a minimum 25% farebox recovery ratio with a target rate of 30%. Another small fraction of Metro’s revenues are composed of FTA grants, some of which may require Metro maintain certain farebox recovery ratios. These are economic and legal obstacles to eliminating fares, but they are hardly insurmountable. A loss of FTA grants could be recovered by identifying new revenue sources or reshuffling budget priorities. But more importantly, state policy isn’t static; laws and regulations (even entire legal and regulatory frameworks) can crumble in the face of disruptive social movements. In Chile, the “Evade & Struggle” revolt forced the Chilean national government to rescind fare hikes on the Santiago Metro within days.

“This call came from a random lefty on social media, not from someone with a more material stake in transit, such as transit operators or rider advocates.”

Explosive social movements are rarely sourced from formal membership organizations. These groups actually tend to play catch-up in new rupture moments, which are increasingly initiated as social media calls to action. Don’t write the Nov. 29th fare strike off merely because its from an unfamiliar, obscure source. It wasn’t a formal transit riders organization that lead the mass evasions in Santiago and it wasn’t the Riders Alliance in NYC that lead the mass evasion on Nov. 1st in Brooklyn. Radicals and organizers have to be able to read the current political landscape and adapt accordingly. Clearly, the tactic of the fare strike has stoked interest on a new scale in light of Chile and NYC. If the interest is in a fare strike method (and not particularly in advocacy/legislative methods, beyond those already committed to those strategies), the question becomes how can we creatively mold this tactic to a context like Seattle? 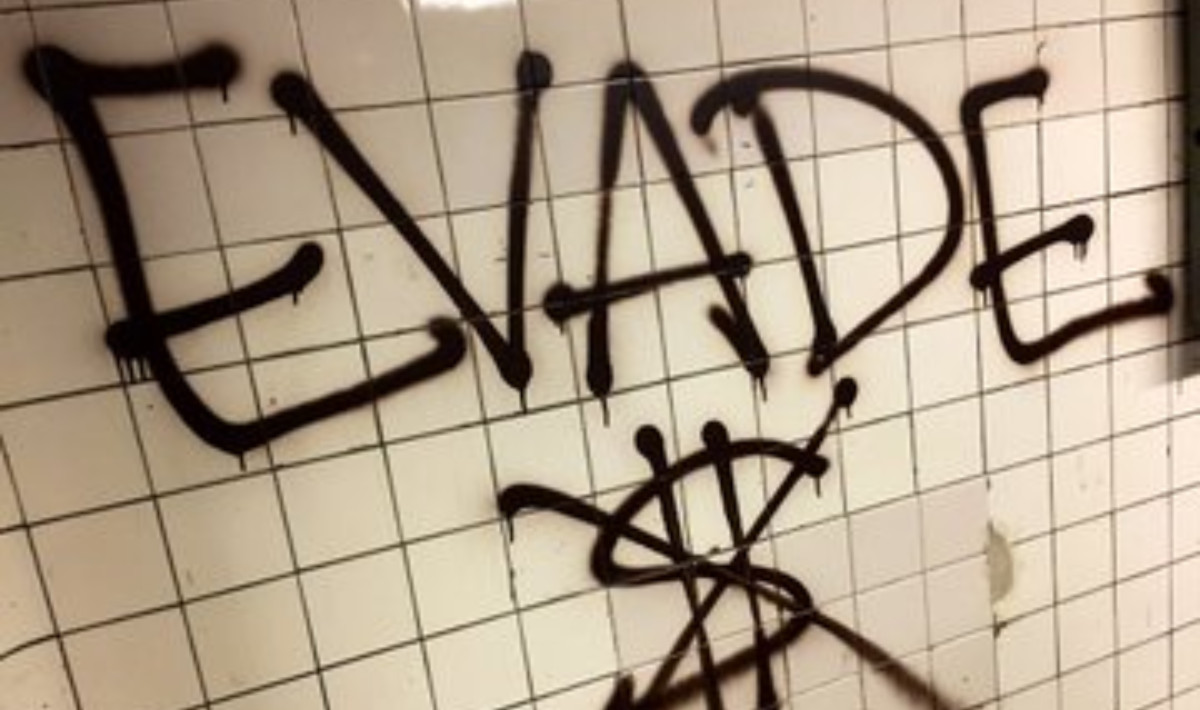 “Seattle doesn’t have faregate turnstiles like New York, so what would a fare strike look like here?

Fare strikes anywhere must account for variations in fare collection. In Seattle, where a ‘proof-of-payment’ system is used on Link light rail and RapidRide buses, mass fare evasions could be organized with an emphasis on public, popular education about the need for free transit. The evasion could be structured so that all fare strike participants stick together during an action and train/bus ride, so no one individual has to face down a transit cop alone. Funds should be raised to support those who get busted. Beyond mass fare evasions, there are multiple ways to participate in the fare strike, from staging impromptu copwatch patrols when transit cops start harassing people, to simply sneaking on the train by oneself. As the call suggests, it’s time to get creative.

“ Confrontational direct action like a fare strike will only harm the most marginalized riders.”

Marginalized riders are already subject constant policing and brutality within transit networks. The statistics exposing racist and anti-homeless discrepancies in fare enforcement have been publicly available for years. Transit rider advocacy organizations continue to condemn the brutality of transit police officers from Oakland to New York City, yet police violence continues unabated. The inaction implicit in this critique is not an option.

Depending on how fare strikes are structured, they can actually guarantee a higher degree of safety for fare beaters and marginalized riders. During public fare evasions, numerical strength can shield riders from police harassment and brutality. The mass character of fare strikes may make riders feel more comfortable intervening to deter the harassment of fare evaders. And if large public actions are called for in advance, transit police activity could be diverted away from other parts of transit networks, heightening safety for fare beaters and marginalized riders in these parts of the system.

Fare strikes do entail risks, of course. Thus, it is crucial to develop mutual aid networks to support those who get busted for evading fares, or worse. Organize benefit shows to pay the fines of strikers. Develop grassroots insurance schemes that can reimburse consistent evaders when they get fined, like the P-kassan initiative in Stockholm. Stage copwatch patrols at heavily policed stations.

November 29th is just one day. It is a day to experiment on this important terrain of class struggle. The economic impact may not be huge, but it can set a crucial precedent for action to come. Let’s make the best of it. See you on the train!